Excellence in Diversity and Inclusion by iGEM Teams

In 2020, iGEM awarded its first Inclusivity Awards. This award recognizes teams with exceptional efforts to include people with diverse identities in scientific research. Here are the winners of the Inclusivity Awards in 2020; we hope they will inspire iGEM teams to continue to strive to make iGEM and synthetic biology a more inclusive community.

Winner of the 2020 Inclusivity Award in the Undergraduate division. Team Rochester 2020 tackled the language barrier within iGEM itself. The team worked to make their project more inclusive not only through spoken and sign language but also through art. They recognized the importance of language accessibility in science by translating their social media posts into 10 different languages, including English, Mandarin, Japanese, Lithuianian, Arabic, Spanish, French, Danish, and Hebrew, and by implementing American Sign Language (ASL) in their videos. They also provided alternative text and captions in their media to promote awareness of endometriosis, and aimed to facilitate the integration of ASL vocabulary in synthetic biology. They worked to make not only their wiki and its content as accessible as possible but also their project, by designing their Wet Lab and Hardware approaches to be accessible to low-resource areas through adapting their diagnostic and hardware designs to be inexpensive and simple to use.

Winner of the 2020 Inclusivity Award in the Overgraduate division. Team Leiden realized that color blindness can represent a major hindrance for researchers when interpreting color-based results. Their wiki, including all charts and graphs, were designed using only two main colors (#007972 and # fe9901), which can be seen and are clearly distinguishable to people with all types of color blindness, making the information fully accessible to them. The output of their diagnostic device is friendly to people with any of the different color blindness types. They even provided some Ishihara plates, so that readers of their wiki are able to test themselves for different types of color blindness. Team Leiden encouraged upcoming wiki designs and future scientists to be color-blind friendly, by informing team members about this condition, providing lists of online tools and filters, and suggesting strategies to tackle issues with results representation in report figures. The team recommended that color-blind persons should find assistive tools to better discriminate colors in publications that are not color-blind friendly. 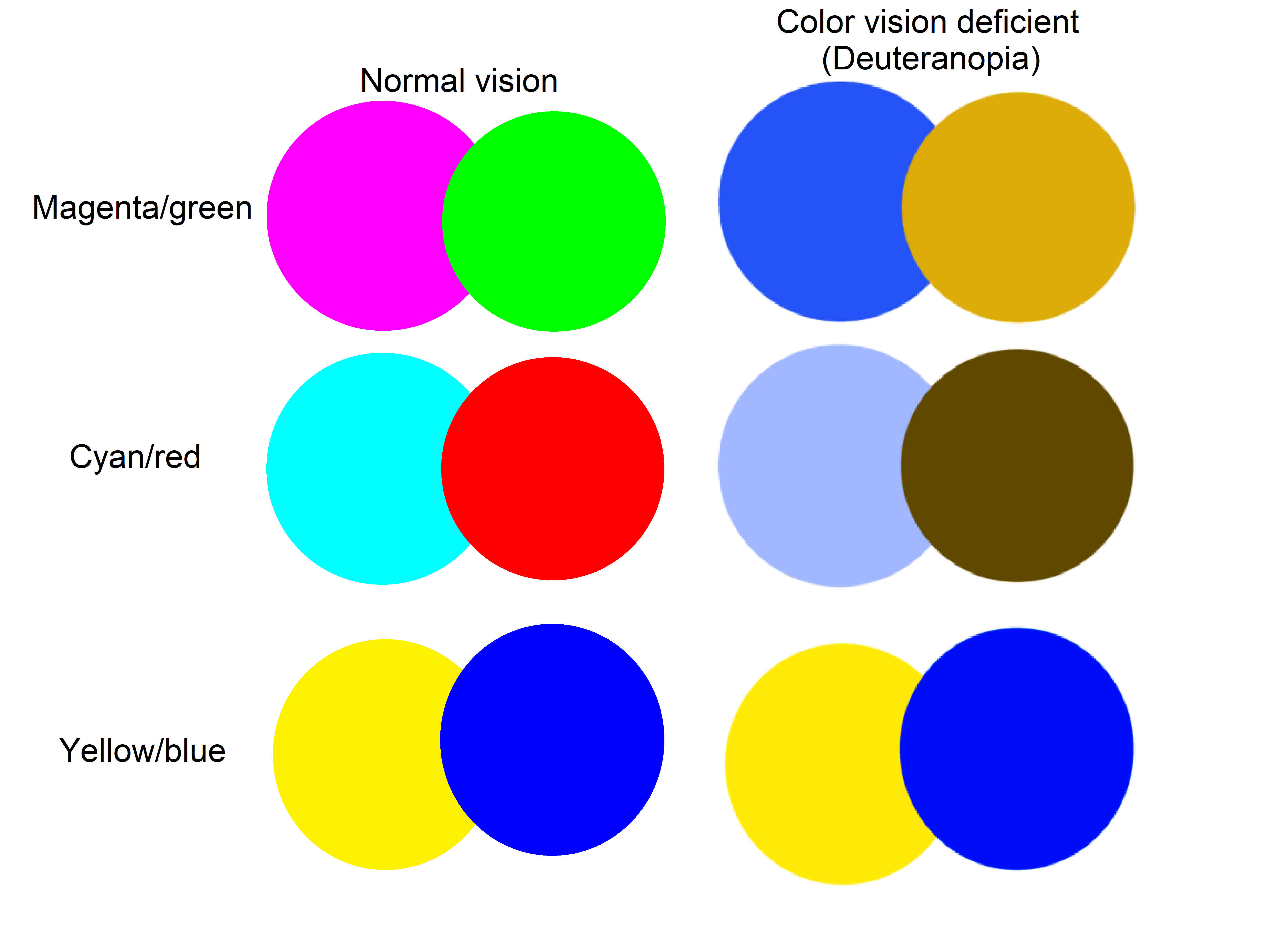 Winner of the 2020 Inclusivity Award in the High School division. Increasing the visibility of minorities in STEM is a powerful instrument toward changing the social and cultural contexts that fuel their under-representation. In their podcast series "Boss Women in STEM," PYMS GZ China interviewed formidable women in STEM about their work and their paths to success, shedding light on the struggles they faced along the way. Additionally, PGMS GZ China consulted prominent Latinx experts in STEM on the topic of Latinx underrepresentation, after which they created a Diversity and Inclusion Plan for the Latinx Community in STEM. Their plan described steps that could be taken to address discrimination, lack of visibility, communication and opportunities, as well as the lack of STEM resources faced by Latinx youth. In their work, PYMS GZ China exemplified iGEM's spirit of diversity, inclusivity, outreach, and collaboration.

Several iGEM teams have focused their Education and Public Engagement efforts on enabling equal opportunity in scientific practice. Many of these efforts have inspired the mission and activities of the iGEM Diversity & Inclusion Committee. We have compiled some of them for you here, and hope that they will inspire you too! 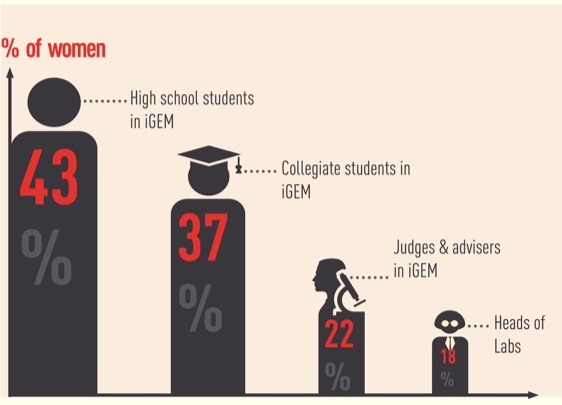 The Paris Bettencourt 2013 team conducted a large study investigating gender representation within synthetic biology research labs, conferences, publications, and iGEM. The team utilized available information reported on the iGEM website to create an extensive database, collecting gender ratios of students and advisors for 600+ iGEM teams over 5 years. They performed statistical analyses using this data and showed, among other results, that success in iGEM can be correlated with gender diversity. The results of their investigation led them to recommend that iGEM work to actively improve gender representation, which motivated the creation of the iGEM Diversity & Inclusion Committee.

The Marburg 2014 team pioneered work in addressing inclusivity by engaging with BLISTA, a local institute for students who are visually impaired. Their unique collaboration allowed them to recognize how much we fundamentally rely on sight to understand science and operate research, and to identify the many different ways in which visually impaired students are inherently excluded from these activities. The team’s quest to confront this social injustice led them to develop analysis techniques based on audio readouts versus visual readouts, which they in turn applied to their own project. Moreover, the team sought ways to make their laboratory environment more inclusive, for example, by eliminating physical tripping hazards and creating braille scripts. Their inspirational engagement efforts motivated the creation of the “Best Education & Public Engagement Prize”, and their most valuable lesson can be summed up by their quote: “We learned that it is possible to integrate visually impaired people into science if we try.” 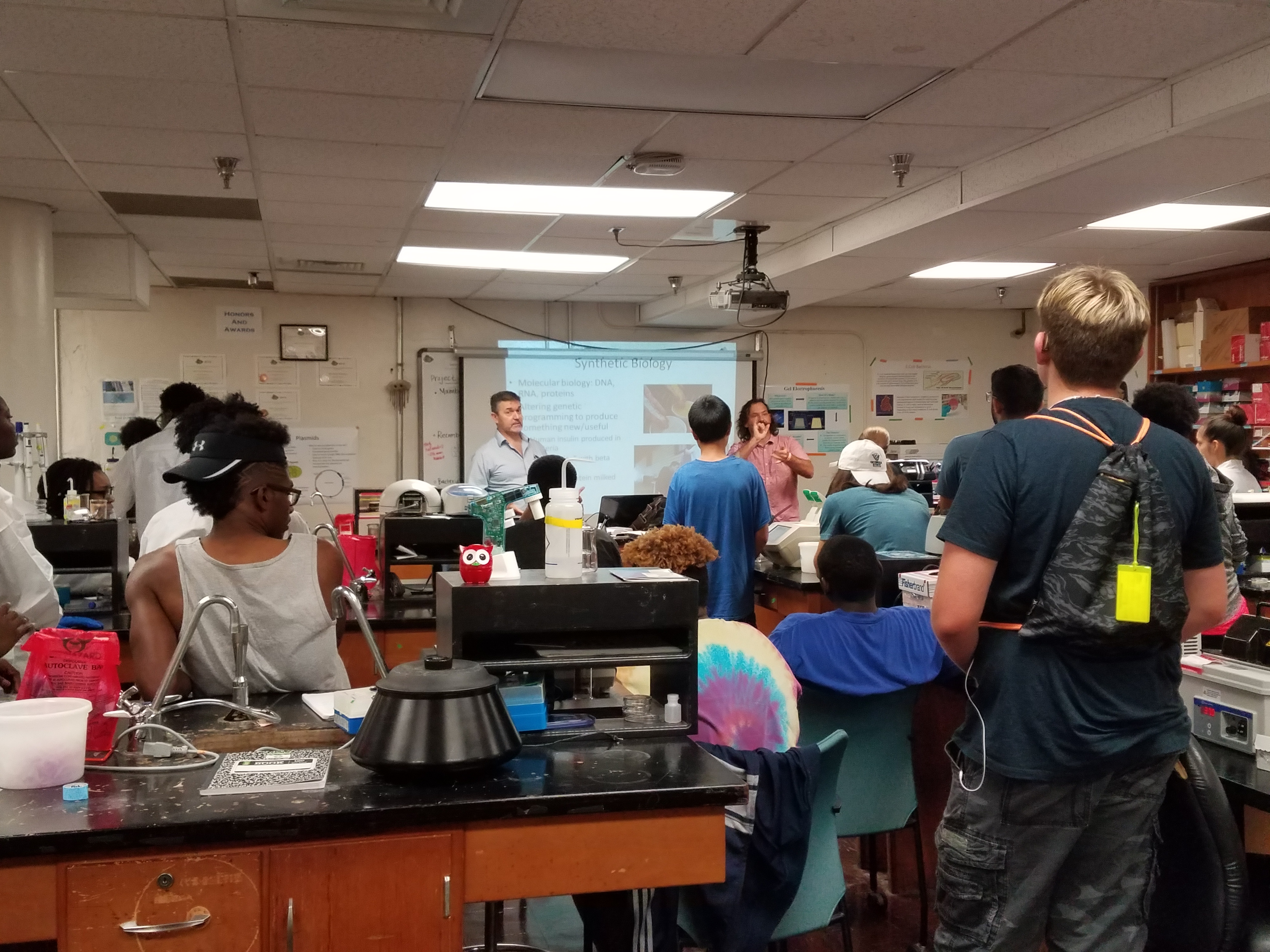 2017 Georgia State’s team members lecturing in GCDHH with the help of interpreters.

The Georgia State University 2017 team engaged with hearing-impaired students and professionals, seeking a greater understanding of how such students experience the laboratory and communicate. The team worked on promoting the accessibility of scientific communication to deaf and hard-of-hearing persons. As part of their public engagement and outreach efforts, they met with students through the Georgia Center for Deaf and Hard-of-Hearing (GCDHH) and asked interpreters to help sign their explanations about iGEM and basics of synthetic biology and undergraduate research. The team then worked to integrate relevant lessons into their lab practice, exploring and implementing protocols to improve accessibility. These included learning and trying to communicate in American Sign Language (ASL) themselves and developing new signs for the hearing impaired to discuss synthetic biology. Furthermore, the team developed a guide to help others create more accessible presentations.

The Marburg 2018 team built on the extensive work developed by their own team in previous years to tackle accessibility for visually impaired scientists. The team reached out to interview members of their university and collaborated with the Carl-Strehl-School for the visually impaired to learn about accommodations made for students with visual impairment studying biological sciences. Using what they learned from these interactions, the team developed a “barrier-free wiki” that would enable persons with visually impairment to easily view their wiki without adjustment. They additionally compiled a helpful guide for future teams to create visually accessible wikis, with specific information on best navigation and formatting practices. 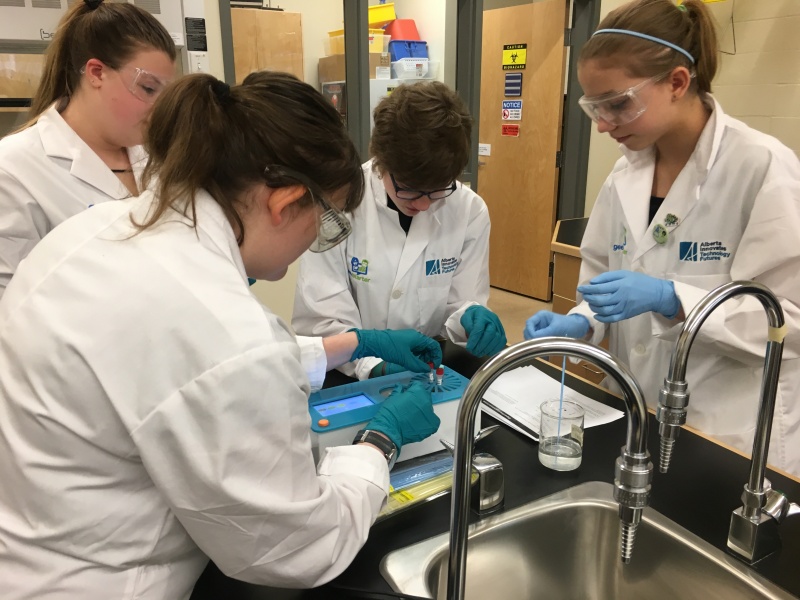 The OLS Canmore Canada 2018 team worked on improving laboratory accessibility for persons with physical disabilities. One of their team members had cerebral palsy, a condition which affects motor coordination and makes working in the lab with small volumes and fragile equipment significantly more difficult. Nevertheless, the team helped this member to perform benchwork over the season and identified several technological areas in which accessibility could be improved. Utilizing her personal experiences and feedback, they developed designs for a more accessible pipette that could theoretically provide the extra stability required for precise and coordinated movement.