Sweet guard aims to help as many diabetic patients as possible to get rid of the pain in the future. Due to the cutting-edge nature of genetic engineering, it will be quite meaningful for every user and the people around them to understand the basic principles of our products. Although Sweet Guard is well-designed and has been initially verified in the wet laboratory, helping users understand the basic principles of Sweet Guard is a non-trivial problem for complicated gene circuits and experiments. Besides, genetic engineering, as an emerging technology, are facing many ethical controversies, which may lead to unnecessary misunderstandings of Sweet Guard among certain populations, while it is necessary to eliminate this non-objective understanding. Hence, building a model to describe Sweet Guard in a friendly and intuitive way will be a great help for our whole program.

The theory of cellular automata is immensely rich, with simple rules and structures being capable of producing a great variety of unexpected behaviors, which is widely implemented in the fields of transportation, infectious diseases, etc., and inspired we creatively developed an interactive animation simulation model based on it. Instead of traditional animation model, our model uses p5.js(oriented from processing) to draw and precisely control every graphical element based on quantity logic and synthetic biology. Users can simulate several physiological processes related to glucose metabolism through interaction with our model, and then the model will respond as the gene circuit and present the workflow of Sweet Guard.

In order to make the model easy to understand and design, we make the following assumptions:

Some more changes and assumptions are different from the real physiological structure that are not explained here. In principle, this model is developed for the convenience of users for understanding and visualization. Emphasis should be placed on the aspects of the model illustrating the working principle of the product during interpretation.

This is our model introduction video, through which you can get a preliminary understanding of our model and its functions. It’s worth mentioning that we deployed the model to the team’s web page. Everyone can directly experience and read our model by clicking on the link attached to its corresponding model description.

Click for CA model interface showed in the video

In this part of the animation, we simulate the process of the entire gene circuit.

The existing models are mostly based on compliance with experimental data or the perspective of common sense, or just presented itself in a too simple and easy-to-understand animation form. These ways may make the model too obscure or unable to transmit enough information to concretize readers' cognition.In contrast, the CABGCV developed by us has been improved on the basis of general forms of animation, avoiding the shortcomings of most existing models: 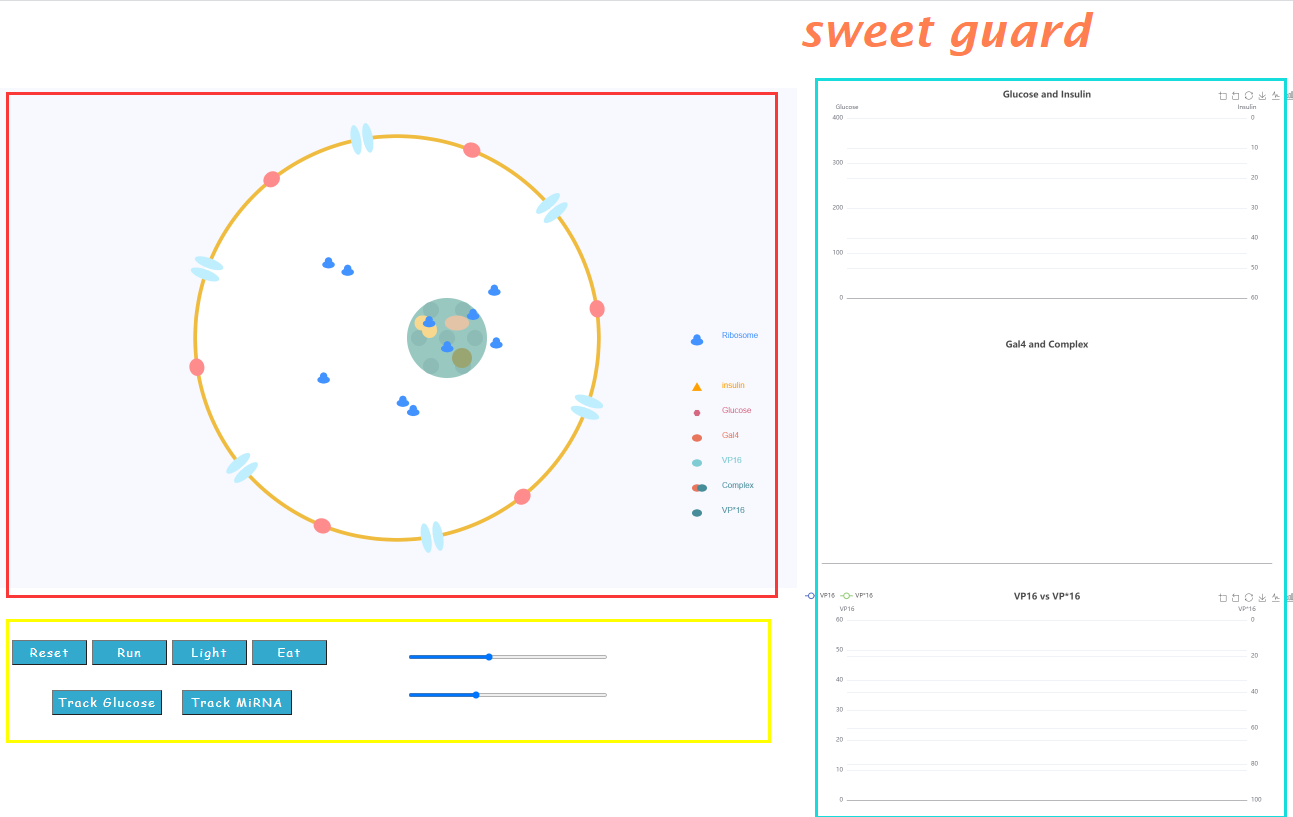 The visual model is divided into three interfaces: view(left upper)、control center (left bottom) and Panel(right). In the view interface, you can see the initialized engineered cells (whose color is orange), the blood sugar pool (the left side), and the legend of the main structures and substances on the right. There is GLUT, through which glucose particles can enter the cells, and insulin receptors on the membrane of the initialized engineered cells. There is nuclei, which can respond to various signals to express corresponding genes, and several ribosomes involved in gene expression in the cell.

At the beginning of the control center interface, there were six buttons and two sliders.

In the dashboard interface, three dynamic dashboards (each index is 0 at the initial state, so there is no content) can be seen. These three dashboards display the dynamic quantitative indexes of the corresponding particles in the view interface in real time with the help of the ThemeRiver map and the line graph.

In the initial state, users can click on the Run to start our model animation. There is some initial blood glucose of certain concentration in the blood glucose pool. Clicking the Eat button represents eating, with the blood glucose increasing immediately. The glucose level can be seen on the Glucose and Insulin dashboard. Metabolic rate can be dragged to the left to simulate the defected glucose metabolism ability of diabetic patients. The goal of Sweet Guard is to regulate uncontrolled and elevated blood glucose to a relatively stable and normal level. Click Light to activate VP16, which will further trigger the regulation of Sweet Guard. The number of molecules involved in this process is visible on "Gal4 and Complex" and "VP16 and VP16*" dashboards.

When we press the light button, under the condition of blue light, the protein VP16 in cell will be activated. From the red box in the lower right corner of the above figure, it can be seen that the number of activated VP16 protein increased after blue light radiation. 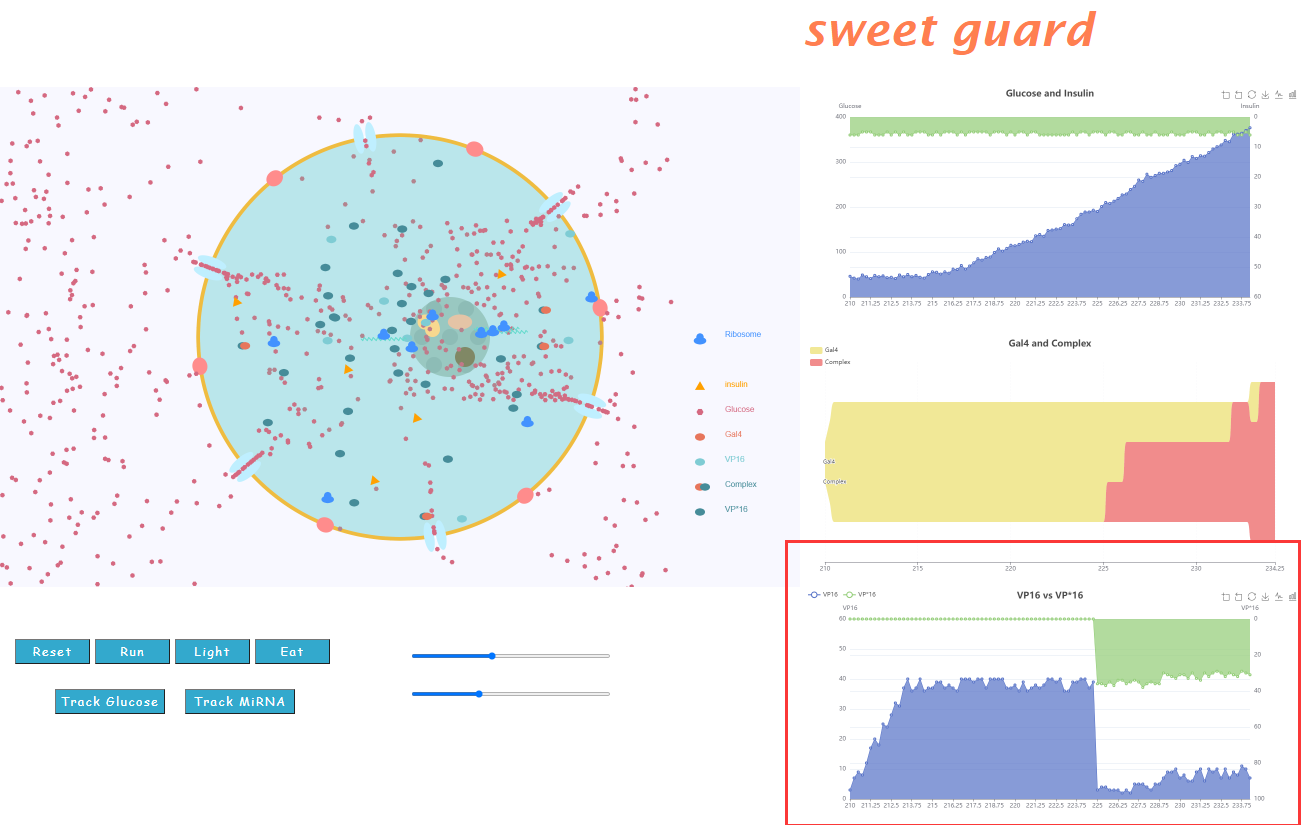 When we press the eat button, we are simulating the eating behavior of patients using sweet guard. It can be observed that the number of glucose displayed in the upper right dial is slowly rising as the process of blood glucose rising. 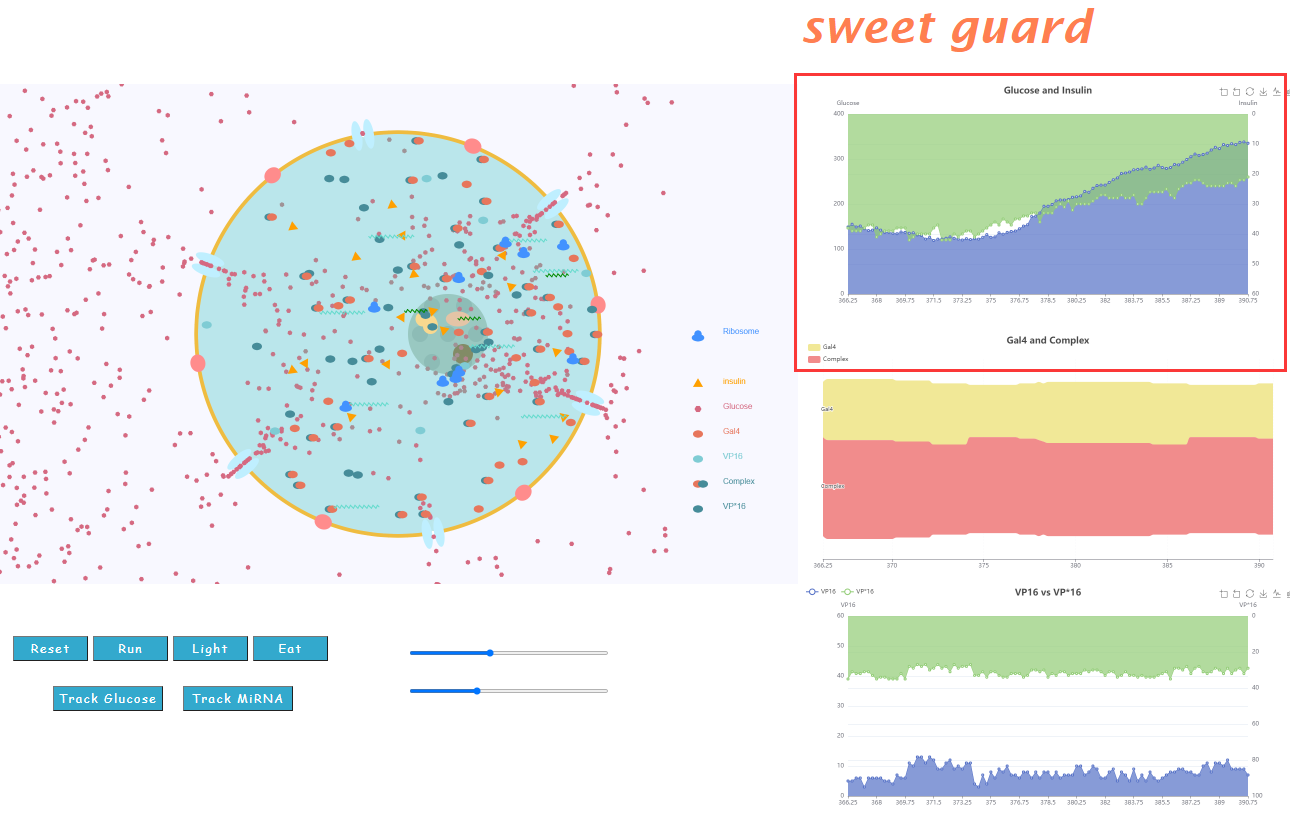 After a period of observation, we can find that our gene circuit design is feasible. From the frame in the upper right corner of the graph, we can conclude that the glucose concentration and insulin concentration tend to a stable value, which verifies the feasibility and stability of our model. 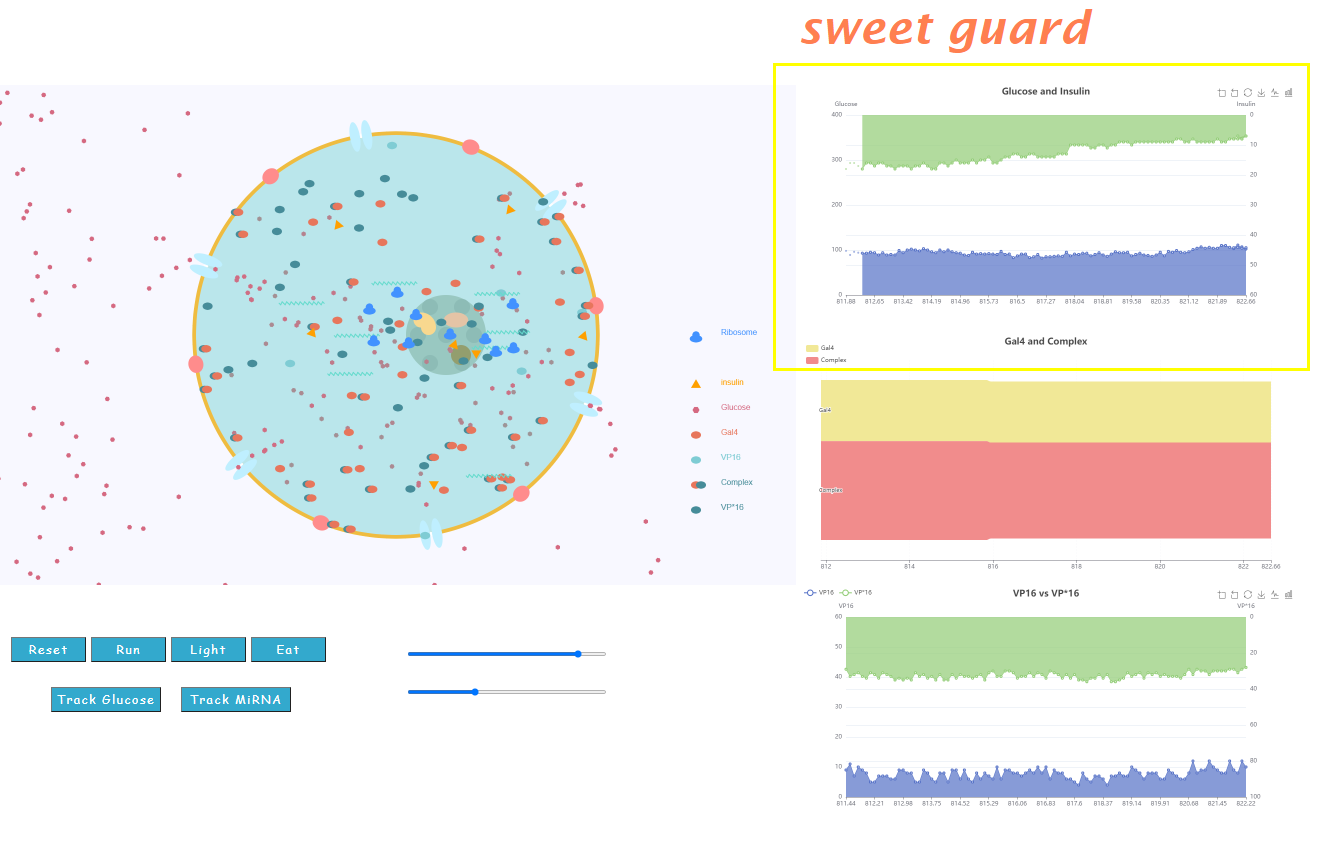 Based on quantity logic and synthetic biology, we designed the algorithm for our cellular autumota. Here is our algorithm flow. 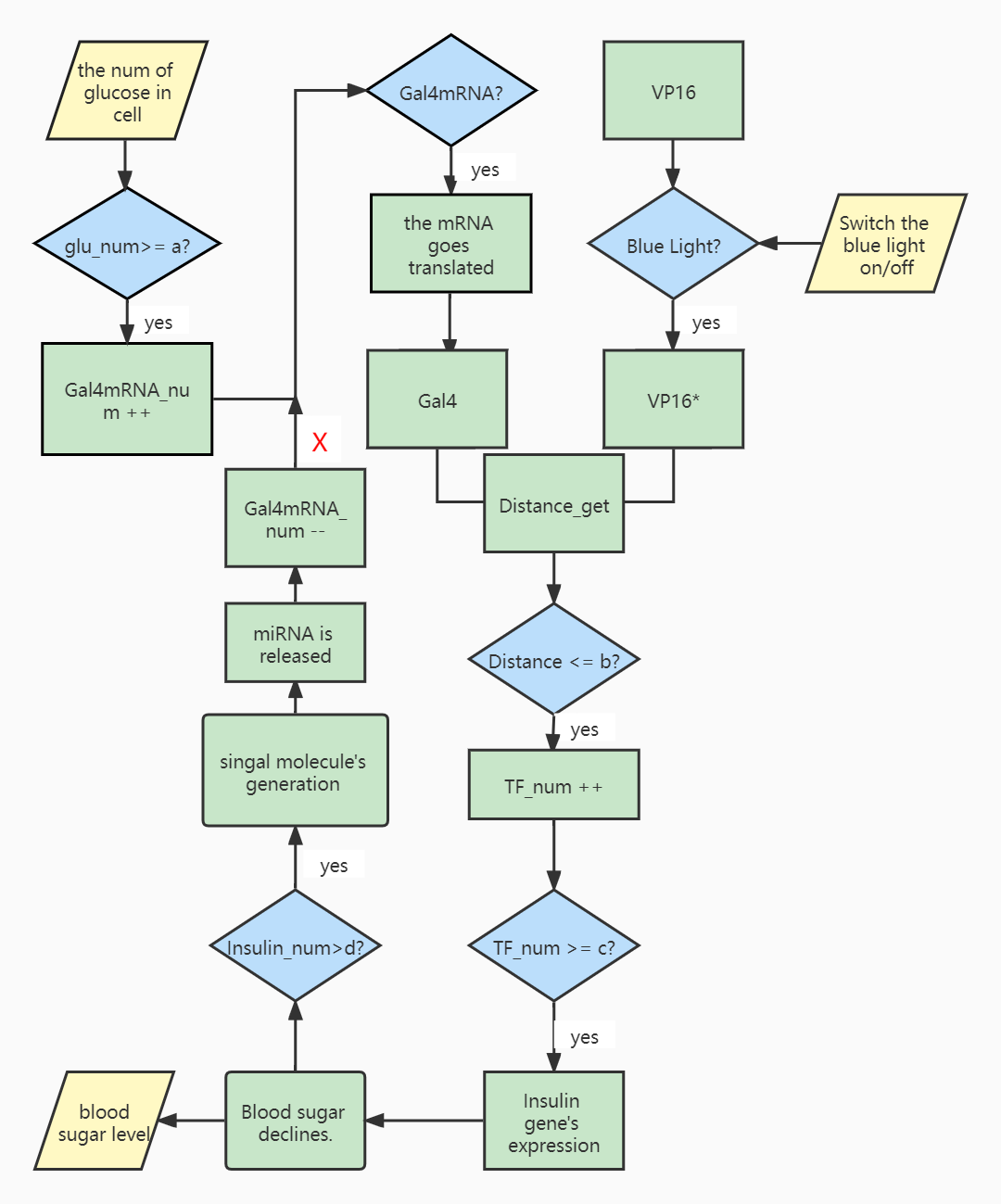 For the purpose of more intuitive observation of the key points of each process in the circuit, the convenience of modularization and fine adjustment of the model, we decompose the complete gene circuit into three modules and present them separately according to the independence and expansion of each module's function：

Some more changes and assumptions are different from the real physiological structure that are not explained here. In principle, this model is developed for the convenience of users for understanding and visualization. Emphasis should be placed on the aspects of the model illustrating the working principle of the product during interpretation.

The user can add blood sugar particles to the internal environment by clicking the mouse to simulate the blood sugar's rise after eating. The cell then feels the increase in blood glucose concentration. After that, if the user operates to irradiate the blue light, the insulin transcription factor is produced, which secretes insulin to the extracellular environment and lowers blood sugar. When the extracellular concentration of insulin is too high and it binds to the insulin receptor on the cell membrane, it will inhibit the production of insulin transcription factors.

In this part, the biological process includes the input of increased blood sugar, the cell’s response to glucose input, the input of blue light on, and TF output finally. This part of the model, which exerts in gene circuit as major input compartment, possesses two interactive modules. Furthermore, TF output can activate the downstream process, i.e. insulin generation.

TF generated from binding of Gal4 and VP16 is triggered by two steps: click to add glucose produces Gal4 and switch the blue light on to activate VP16 (background in cell turns blue). Gal4 mRNA is transcribed in GIP, and the rate depends on the concentration of intracellular glucose (GIP's color changes with the intracellular glucose concentration).

The increased rate of tissue cells’ glucose uptake and degradation is triggered by insulin targeting.

Even if two parts above could implement hypoglycemic function independently, we set this part in order to achieved fine negative feedback and make model a closed loop. One can change parameters in this module to improve performance. Biological process in the module includes binding of extracellular insulin to its receptor, miRNA production by receptor downstream signaling and degradation of Gal4 mRNA

There are a few insulin molecules and glucose molecules at the beginning. Glucose began to increase after 'Eat'. 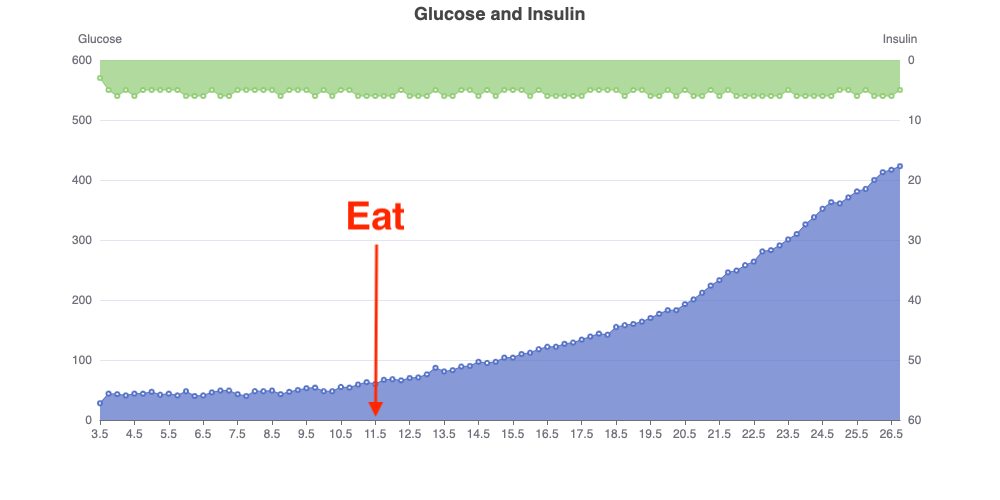 After turning on the blue light, the current VP16 almost completely transforms to VP16* and binds with Gal4 to generate Complex in a short time. 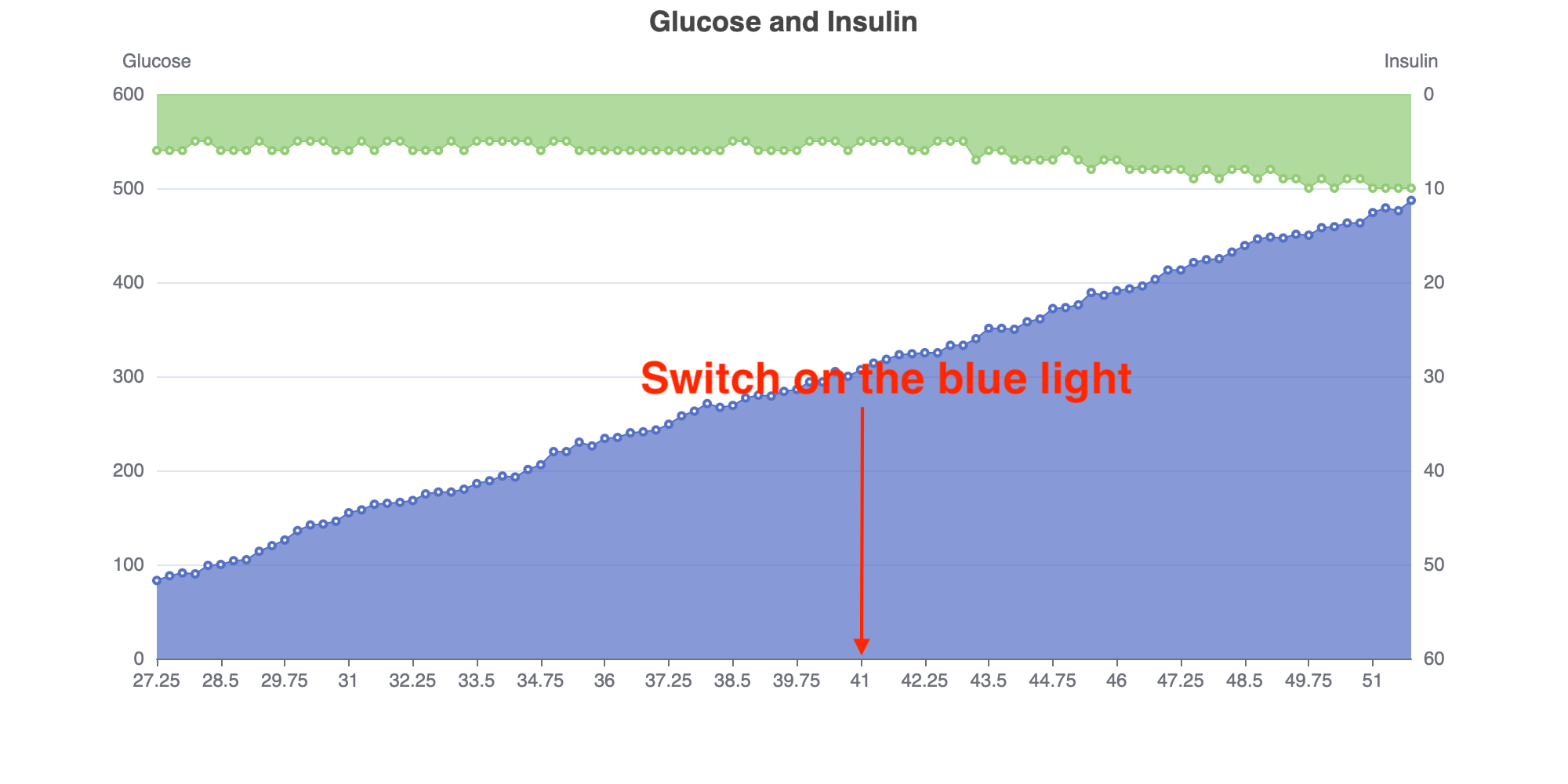 Figure7. Turning on the blue light 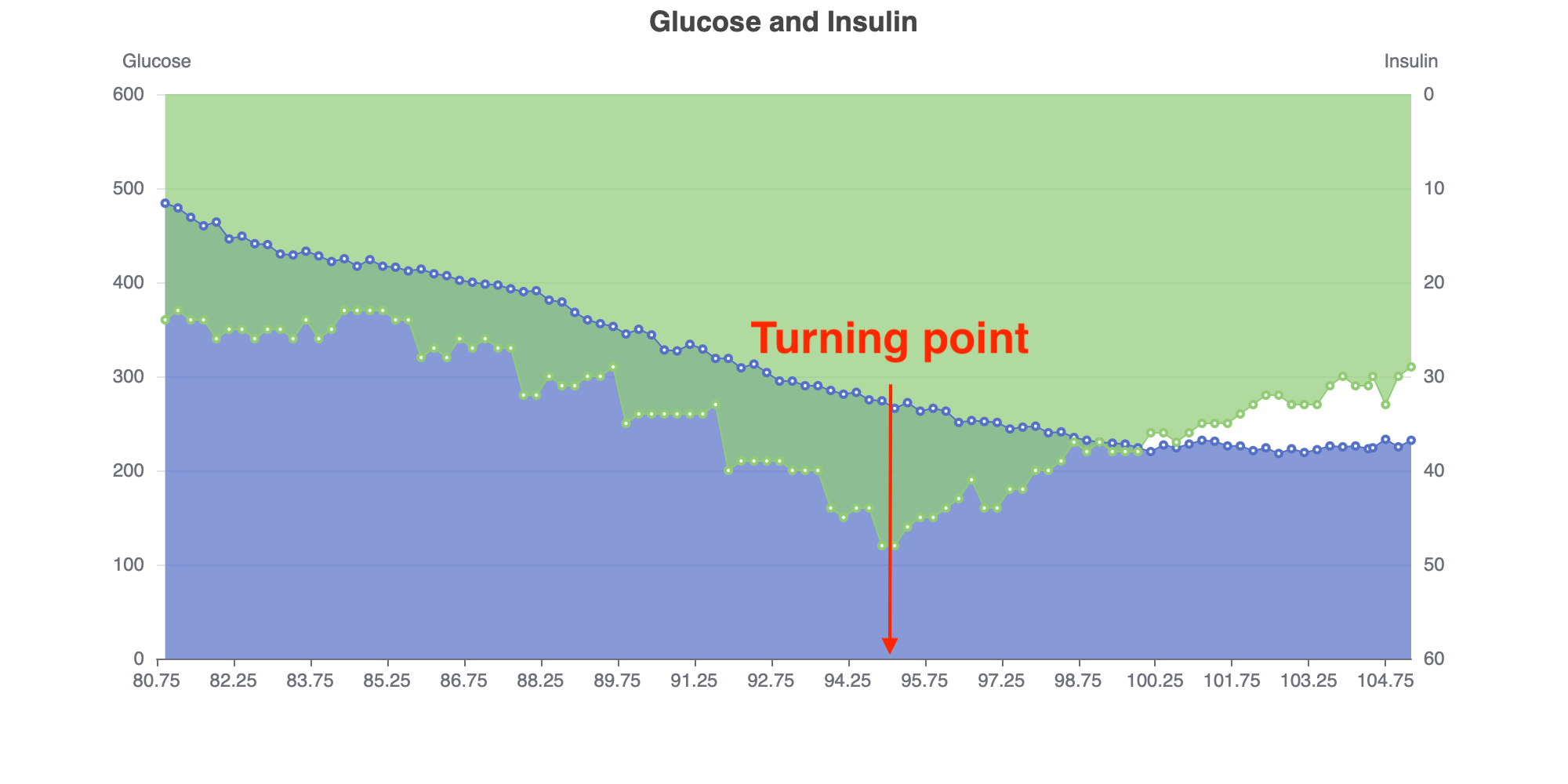 After a considerable period, insulin began to increase, to shorten the number of uncontrolled blood glucose; at this time, although miRNA began to play a continuous role in reducing the new birth of Gal4, the existing Gal4 and Transcription Factors were still playing a role, making insulin produces continuously before being inhibited by negative feedback. 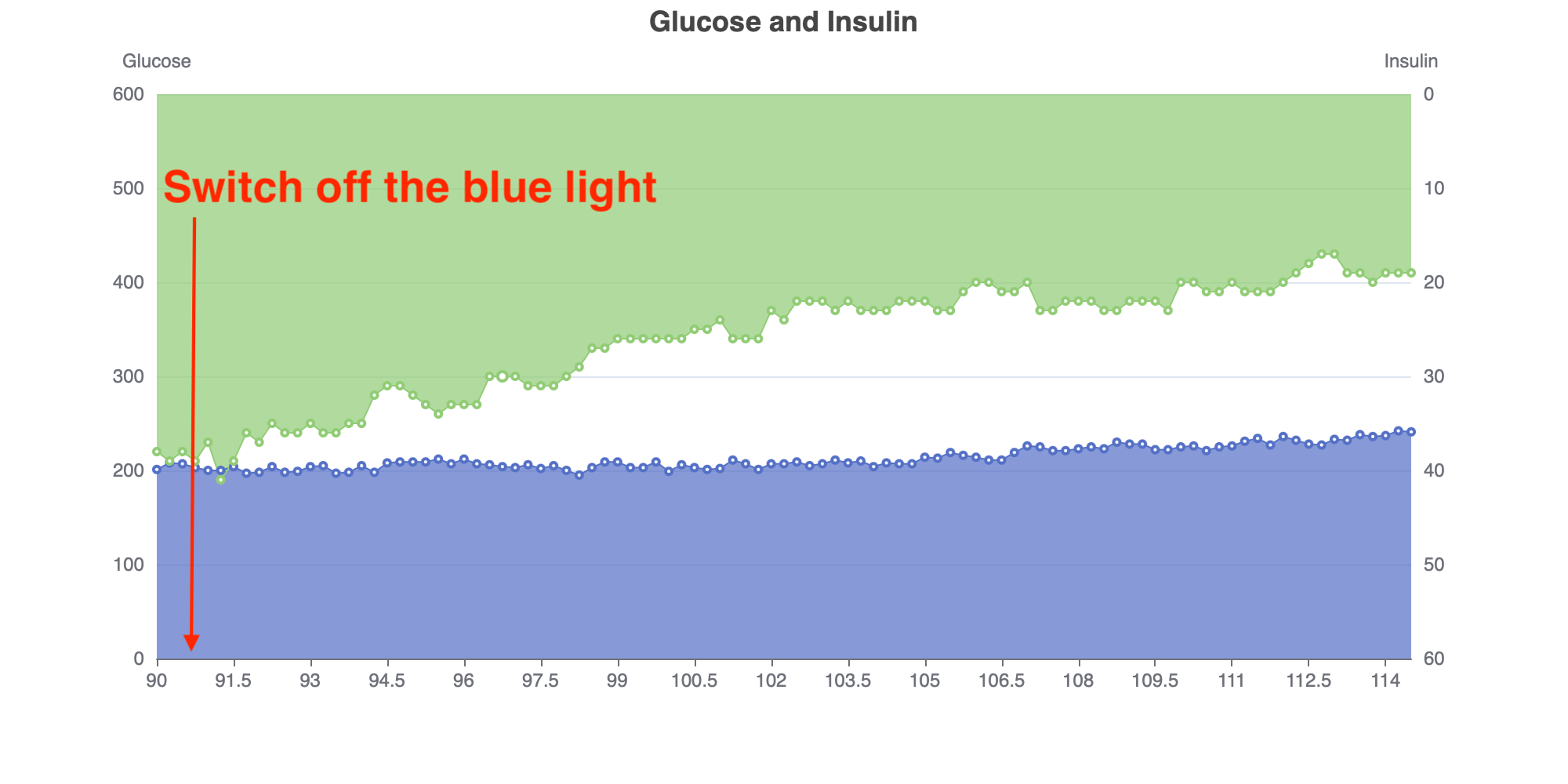 Figure10. Switch off the blue light.

After turning off the blue light, insulin began to fall, and because of no uptake, the index of different molecules can eventually return to the initial state, maintaining a stable level. 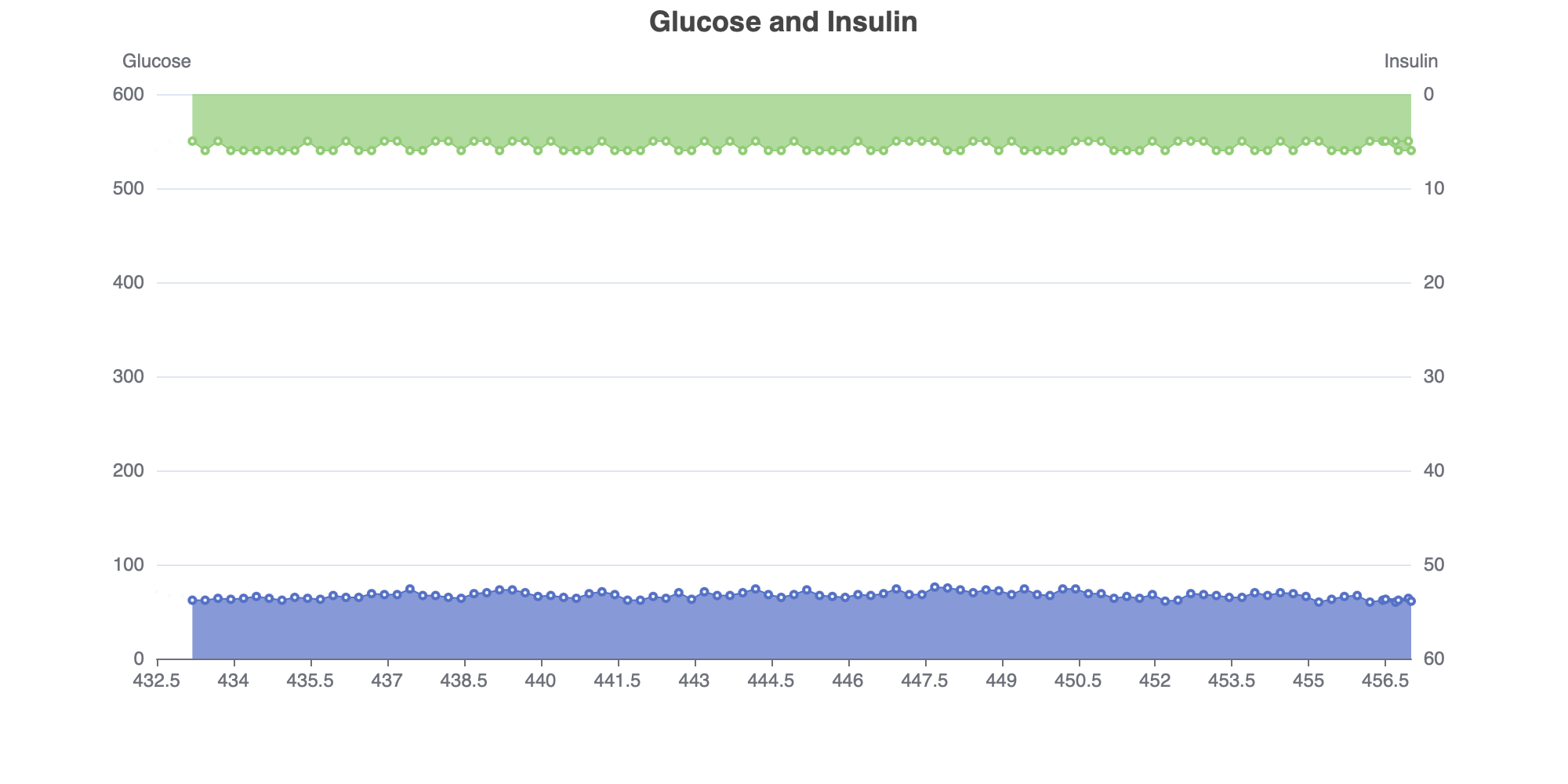 Figure11. The num of particles are maintaining a stable level

In the process of testing the animated model, we discovered a feature of the gene circuits when it works: there is a time lag longer than expected between the insulin's secretion and the blood sugar's reduction. In a considerable period of time, blood sugar has always been maintained at a high level. This observation is consistent with the corresponding experimental data, that is, after the light turns on, the reporter gene doesn't increase sharply in a short time, which indicates our visualization model is highly consistent with the real world, and during the running process, we found that there was also a delay in the process of miRNA lowering the uncontrolled secretion of insulin, and blood glucose had undergone a significant decrease before insulin returned to a relatively stable level, which suggests the animated model also can predict the behavior of the product and extract the information we are interested in, providing guidance for the optimization and improvement of the product. 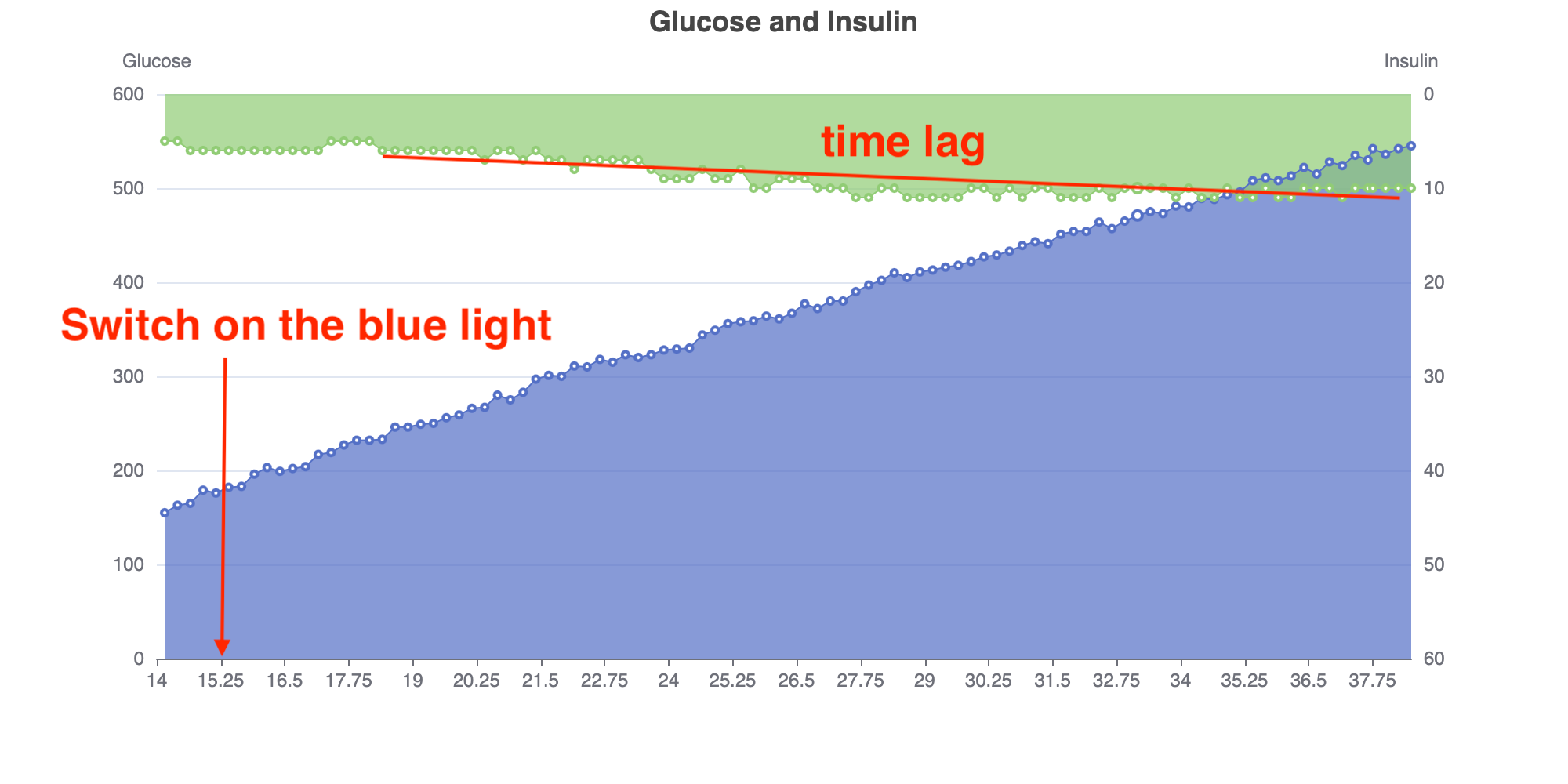