To quantitatively analyze the workflow of Sweet Guard, ensure the consistency of the step design, verify the experimental data, predict the product operation and make further improvement of the product, we developed a dynamic mathematical model. This model is mainly constructed by ODE, which is based on the existing data. It simulates the gene circuit of engineered cells that sense blood glucose and blue light, followed by insulin secretion and the main physiological processes associated with it.

We have improved the existing model to make it suitable for our Sweet Guard design. The ODEs model is mainly composed of three modules: 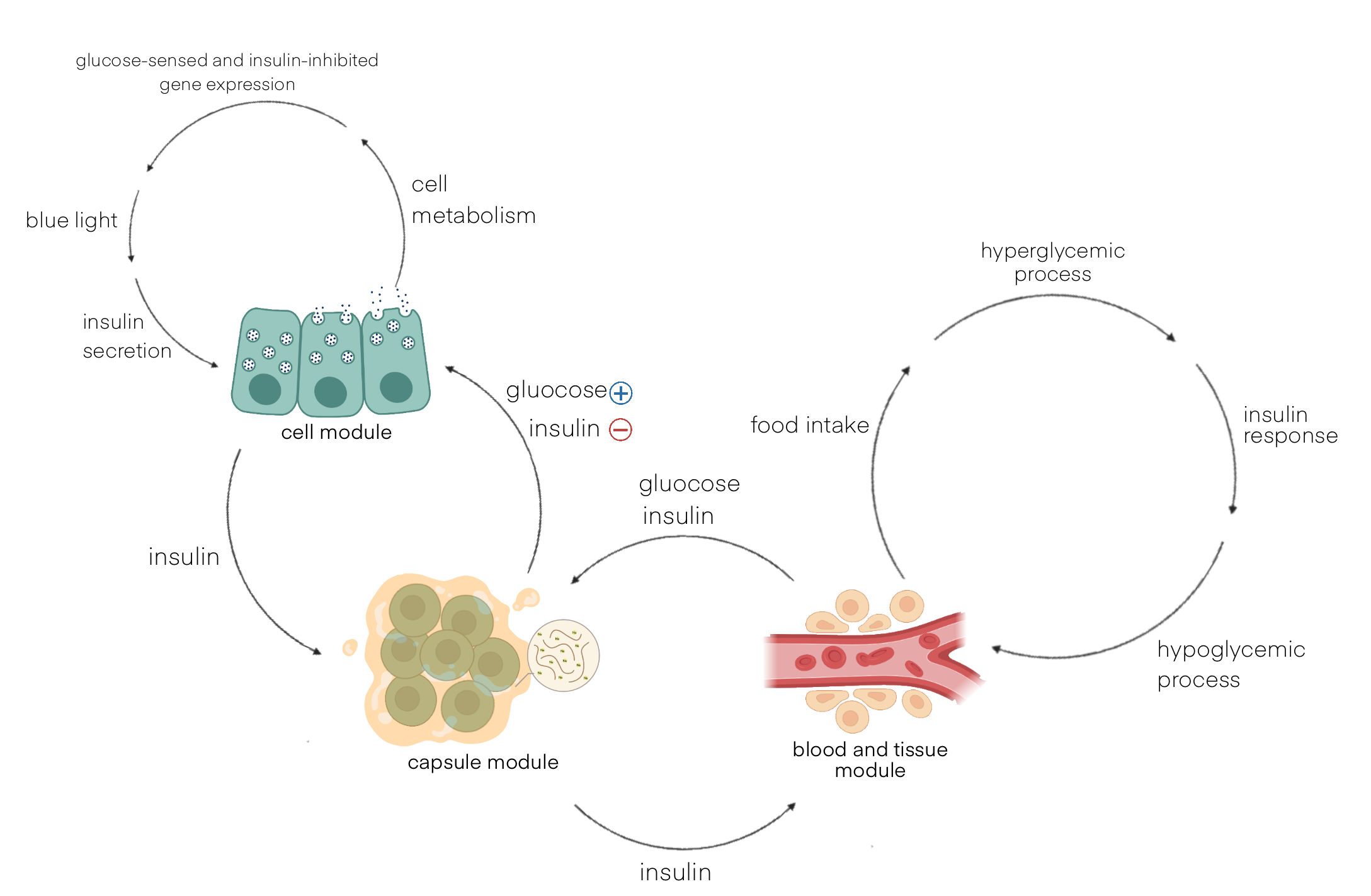 Figure1. Structure of the mathematical model.

Due to space limitations, the detailed description of the model will be briefly introduced in the selection of modules, instead of explaining every equation. The specific parameters can be downloaded in pdf to view. For detailed information, please refer to the references of our model.

The equations used in ODEs mainly include the chemical master equation, the Hill equation, and the Michaelis equation. The chemical master equation mainly characterizes the mutual transformation between various molecules; the Hill equation is used to characterize the degree of activation of a substance that is concentration-dependent on another substance; the Michaelis equation mainly simulates the instantaneous rate of a certain process with the maximum rate under specific conditions. 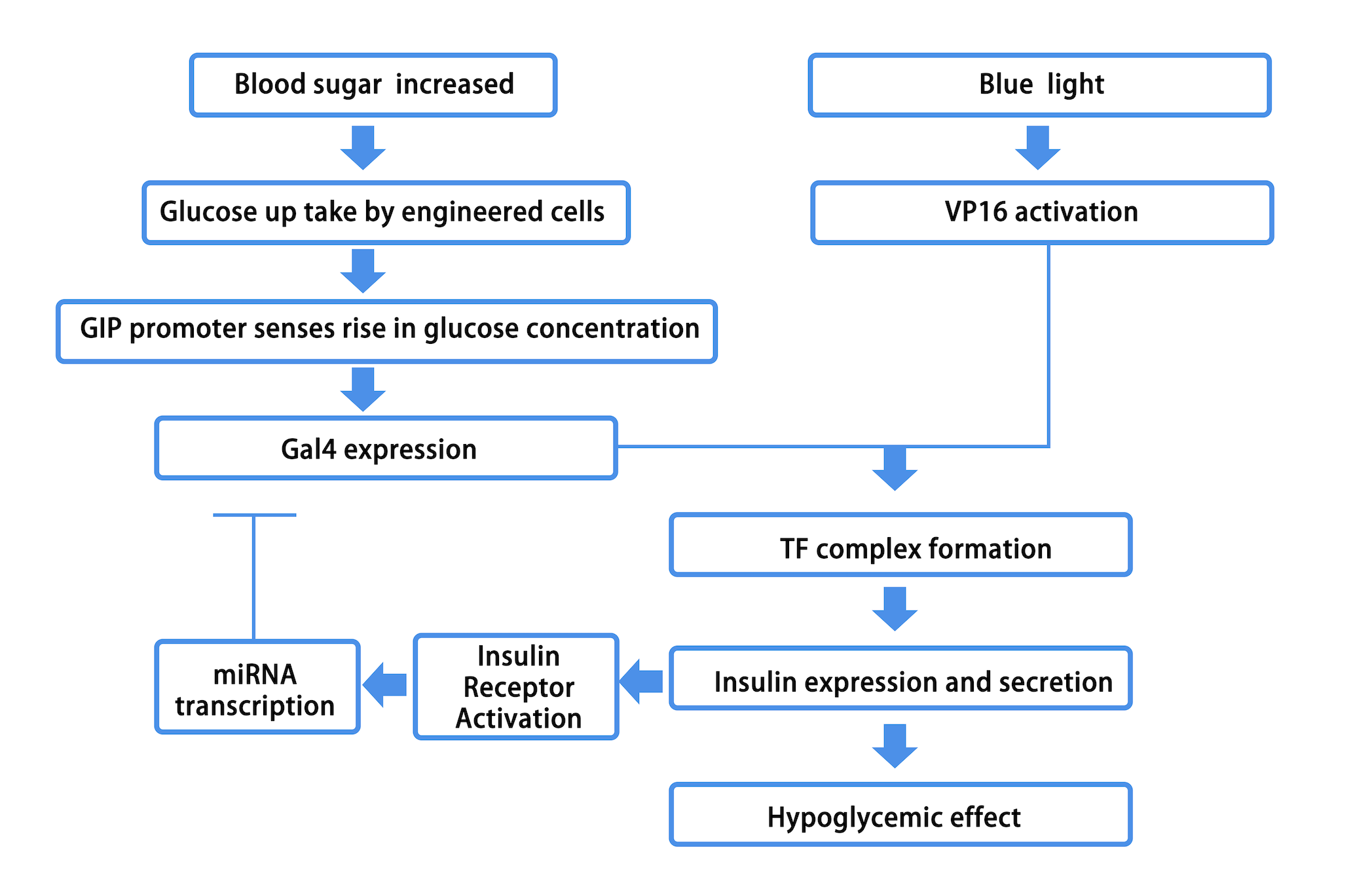 We assume that when glucose enters the engineering cell, the entire circuit starts. The glucose concentration in the capsule is , and it enters the cell at a rate of , where is the total number of engineered cells, and is the rate of glucose uptake by a single cell. The concentration of glucose in a single cell is Gin, and it is metabolically consumed at the rate of to generate intermediate products and (to simplify the equation, we "black-box" the complex sugar metabolism process into two steps: intermediate product generation and generation), depends on and intracellular glucose levels.

The glucose metabolism intermediate product is the signal to activate the subsequent process, that is, the activation degree of the transcription activator of the Gal4 gene depends on the concentration of the intermediate product . The activated transcription activator transcribes the gene to generate , which is translated into . Engineering cells produce constitutively, and their mRNA and protein concentrations are set to and , respectively. itself is unactivated, and the radiation of blue light can quickly transform it into of another configuration before it can reversibly bind with to become the transcription factor of the insulin gene. The of active configuration will be converted to the original inactive configuration by hydrolysis. transcribes . 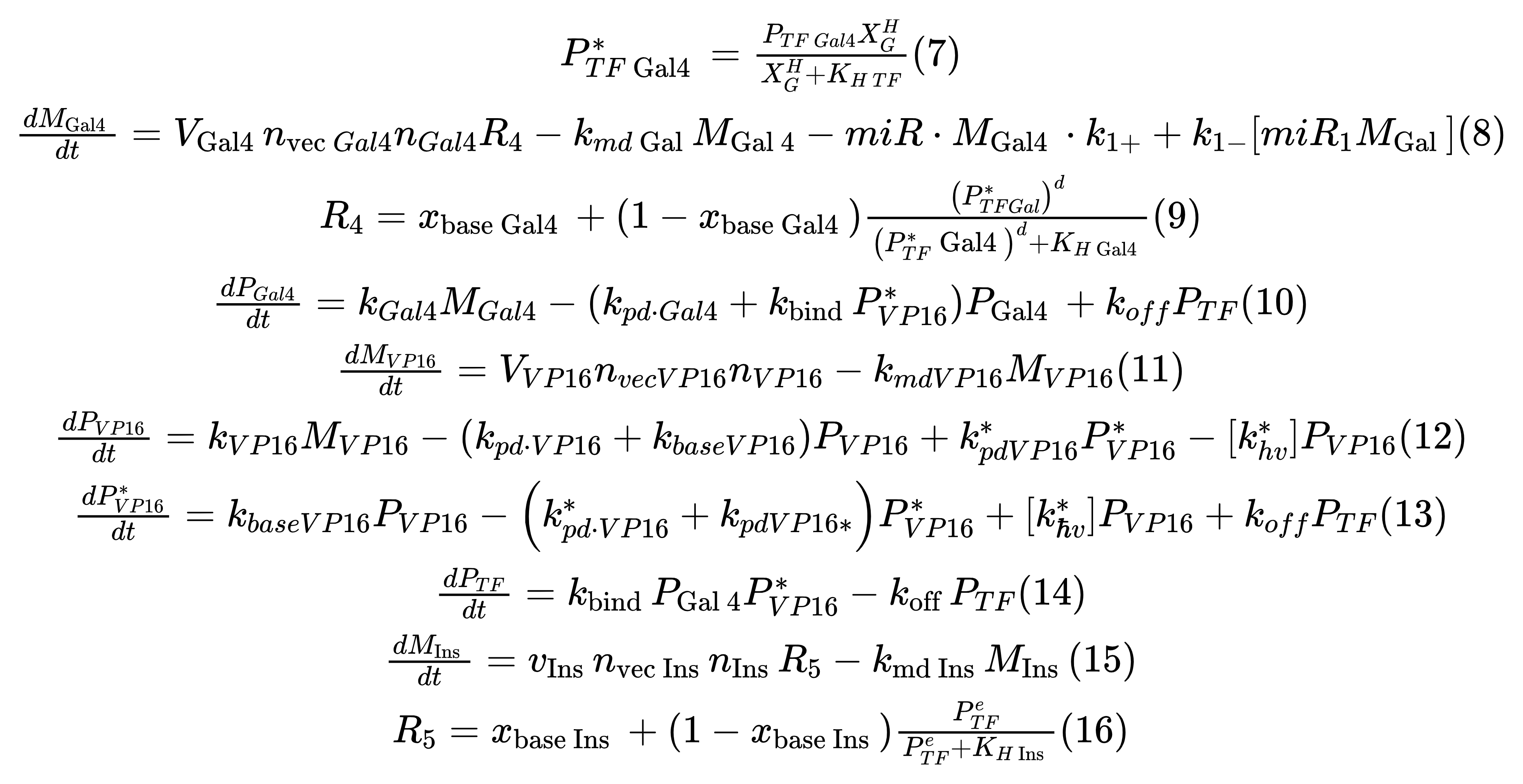 The activated transcribes . can reversibly bind to Gal4 mRNA, and because the latter has four miR-Targets, one can bind up to 4 . The bound with is easily degraded, and the rate of this reaction increases with the number of rising. 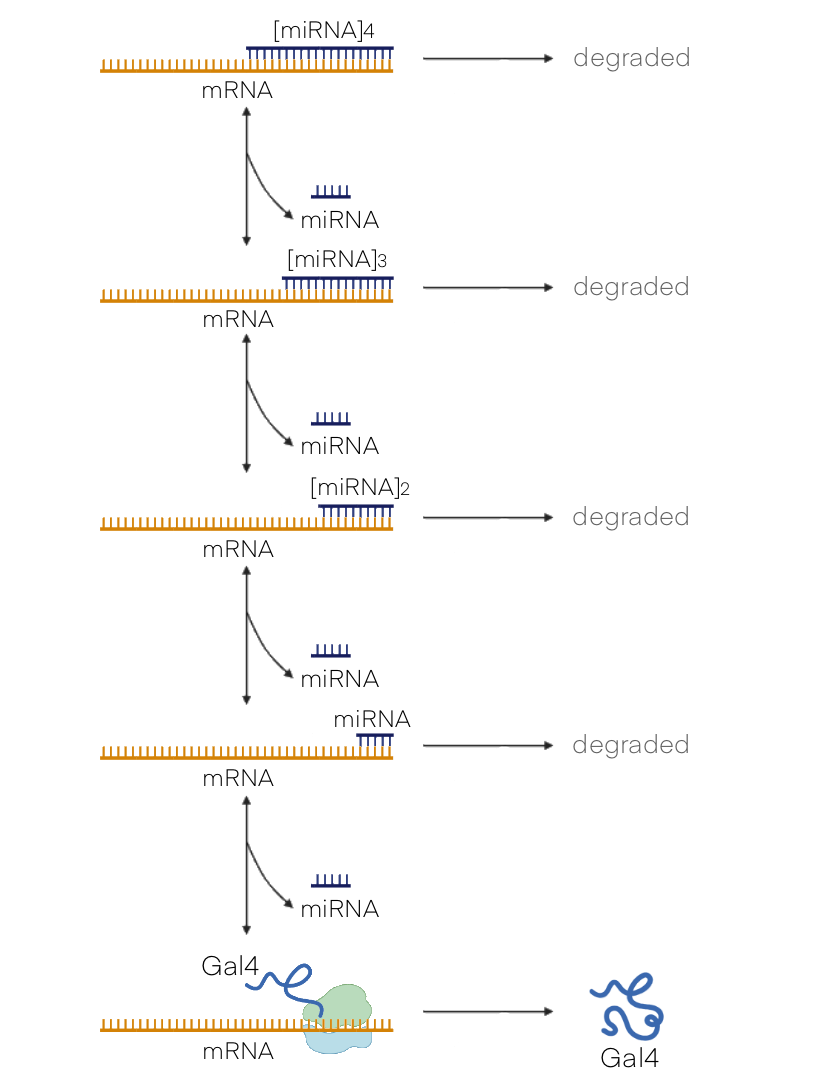 Figure3. Schematic representation of binding of Gal4 mRNA and miRNA

In addition, glucose also needs to diffuse into the matrix before entering the engineering cells.

This part of the model simulates the changes in blood glucose and insulin levels in the body under physiological and pathological conditions. When combined with the above two modules, the kinetic process of systemic blood glucose and insulin can be analyzed when Sweet Guard is running. Based on the analysis of existing data and our subsequent improvements, some notations in this module are as followed:

At the same time, we included an additional (virtual) intermediary compartment for glucose to allow for the adequate representation of dynamics in high intake of glucose in a short time, with a corresponding glucose concentration.

The core idea of this part is to use a proportional-integral-derivative (PID) controller to characterize the role of insulin (see references for details), and obtain equations about three insulin components: