1 Overview
This year's modeling played an important role in our project, and due to the outbreak, we were unable to test the effectiveness of the animal testing system in order to predict the output of 5HTP and GABA and better regulate its synthesis. Our model is divided into two parts, the first part is to simulate the distribution of E. coli in the intestine over time to establish a functional relationship between E. coli volume and distribution of 5HTP and GABA yield, and the second part is to simulate suicide systems to predict the safety of engineering design.

2 Model one: Engineering bacteria movement
2.1 Basic assumptions
Considering that the linear length of the intestine is much larger than its internal diameter, in order to simplify the model, one-dimensional models may be established in the direction of its length. Based on the average intestinal length of adults, it is assumed that the total length of the intestine is 7.5 meters, of which 6 meters in the small intestine and 1.5 meters in the large intestine. At the same time, we consulted the normal 24-hour intake of fluids in the adult gut, simulating the distribution of engineered bacteria intake by adults at lunchtime until six hours later.

2.2 Engineering bacteria movement simulation
After looking up the literature, we know the frequency and magnitude of the intestinal creep in the air pressure state. Based on this, the length of the intestine is divided into reasonable intervals, and the moving equation of E. coli is cycled through time, and the distribution image is obtained.

For the movement of engineered bacteria in the intestines, we took into account factors such as E. coli moving with the eating palate and being driven by the oil attached to the surface of the intestine.

For safety reasons, E. coli intake needs to be excluded from the body for a certain period of time, and we assume that E. coli will be excluded over time by focusing on the end of the intestine waiting for the body to defecate. A suicide switch is also designed that, due to the relatively high concentration of oxygen outside, will trigger a suicide switch for the engineered bacteria, which in turn will kill E. coli.


2.3 Model results and pros and cons 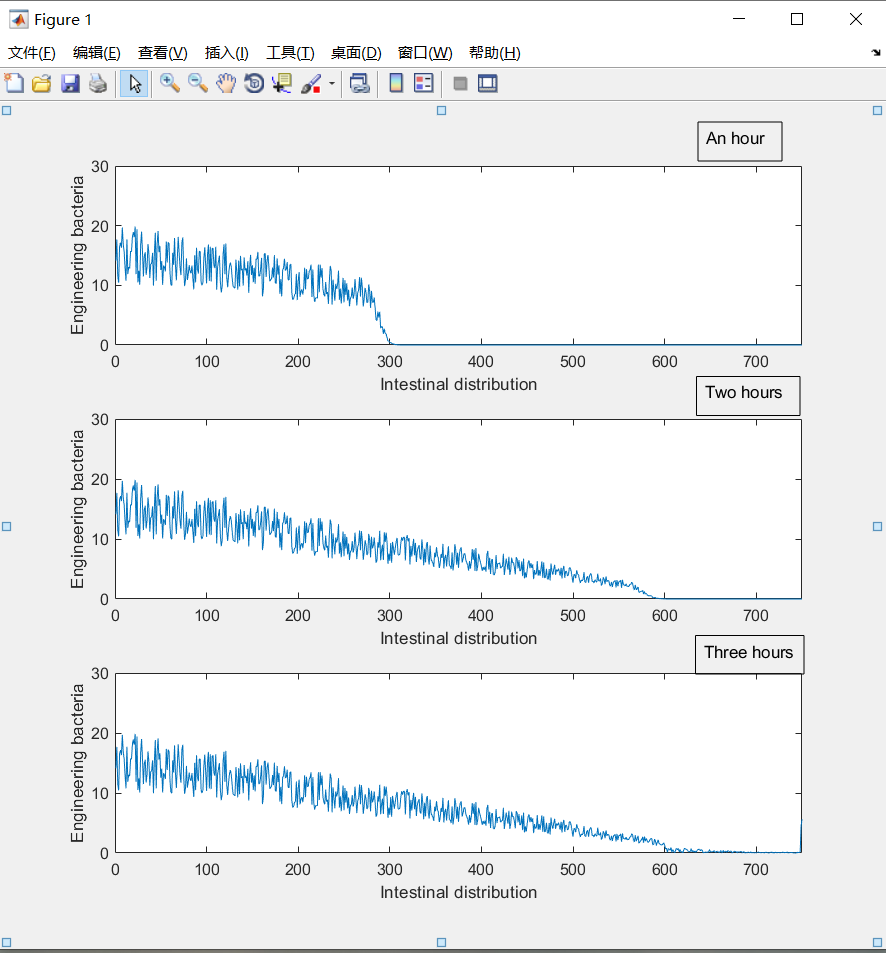 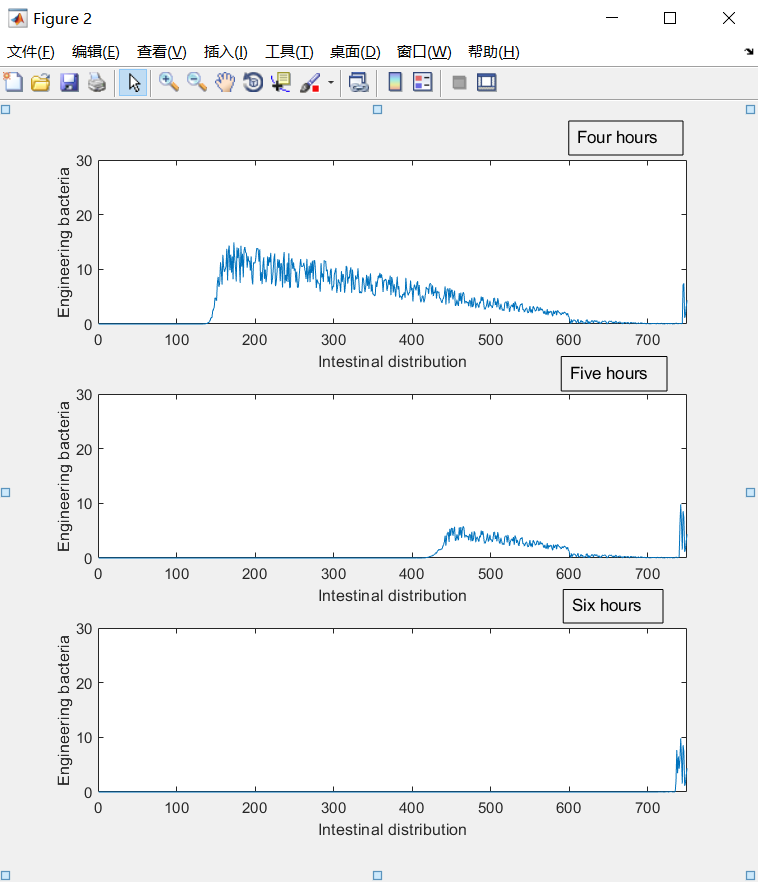 The distribution image also reflects that after a short period of time, the vast majority of engineering bacteria will be excreted, will not affect the body.

2. We neglect the effects of dilution/ growth. We thus assume the cell’s volume to be constant over time.
3. Ignore the effects of translation regulation in this process. 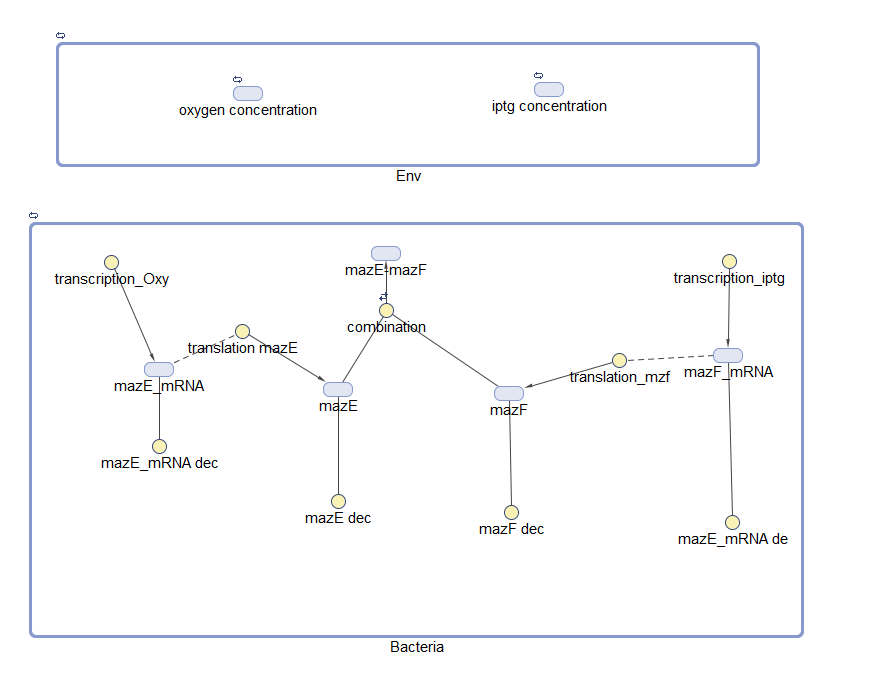 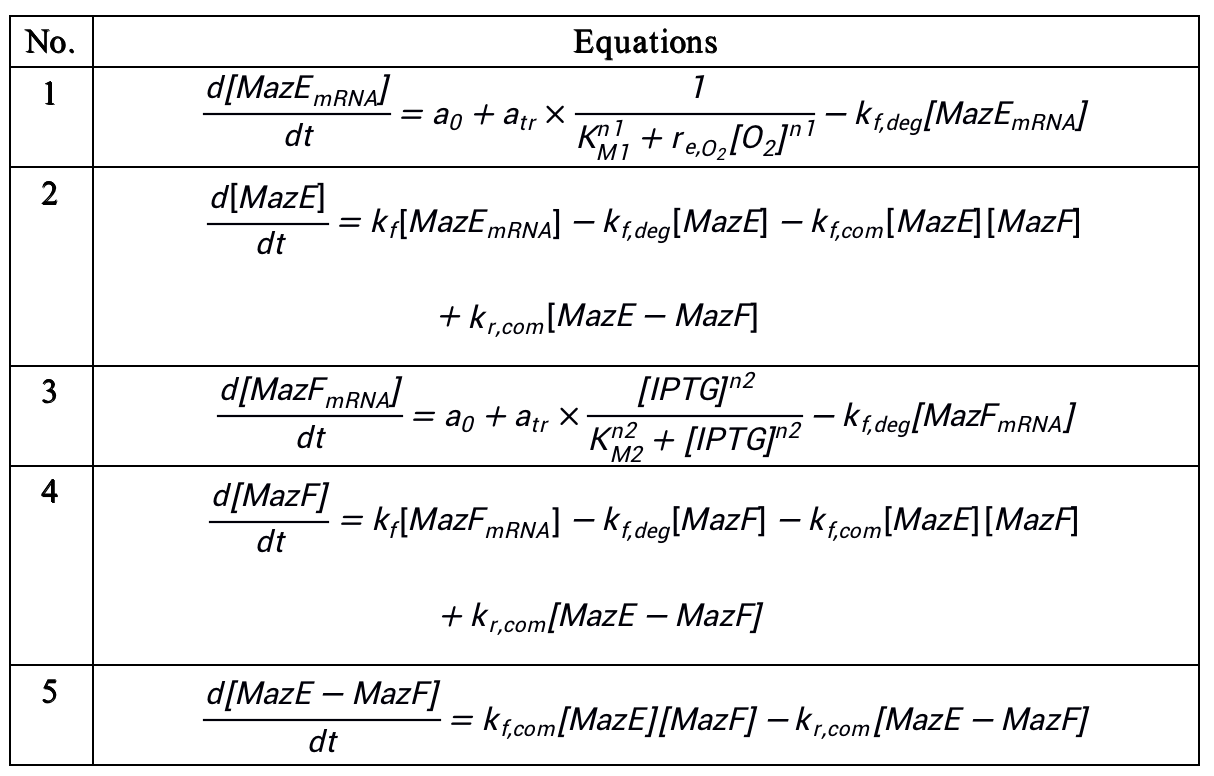 We simulated possible parameters, taking into account the expression of mazF and mazE, as well as the regulation of lactose concentration for lac promoters and oxygen concentration for phyb promoters, and considered that mazEF is a pair of toxin-antitoxin genes, which can be used to determine the death of bacteria.