Secondly, we knocked out the gene encoding FadR protein by CRISPR or recombinase technology. FadR protein has been proven to inhibit more than 15 genes involved in E.coli β-oxidation, and knocking out fadR therefore boosts β-oxidation.

Then we have these plasmids in this part of the experiment

We want to use CRISPR/Cas9 technology to cut fadR which represses the expression of above 15 genes. We searched the N20 sequence , and inserted the sequence into the plasmid below by PCR. The plasmid will transcribe the gRNA to guide the Cas9 protein to target the fadR knockout site. The deletion of fadR will enhance the beta-oxidation in E.coil. 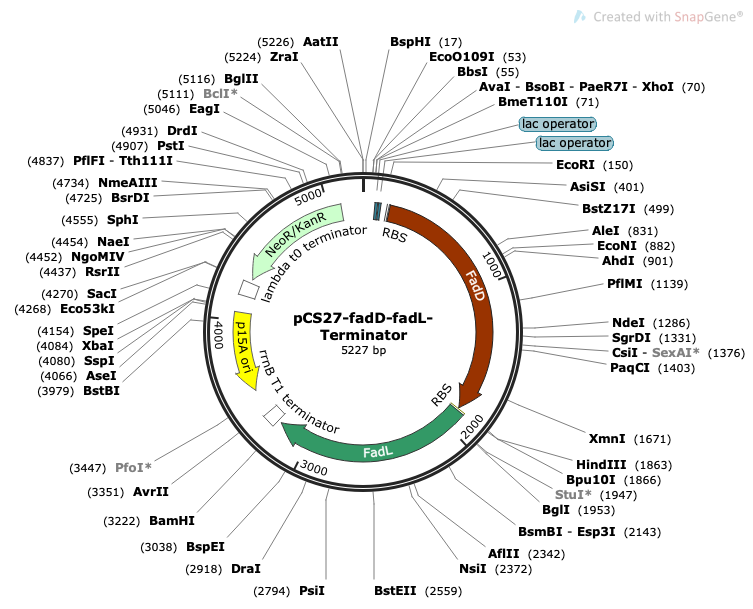 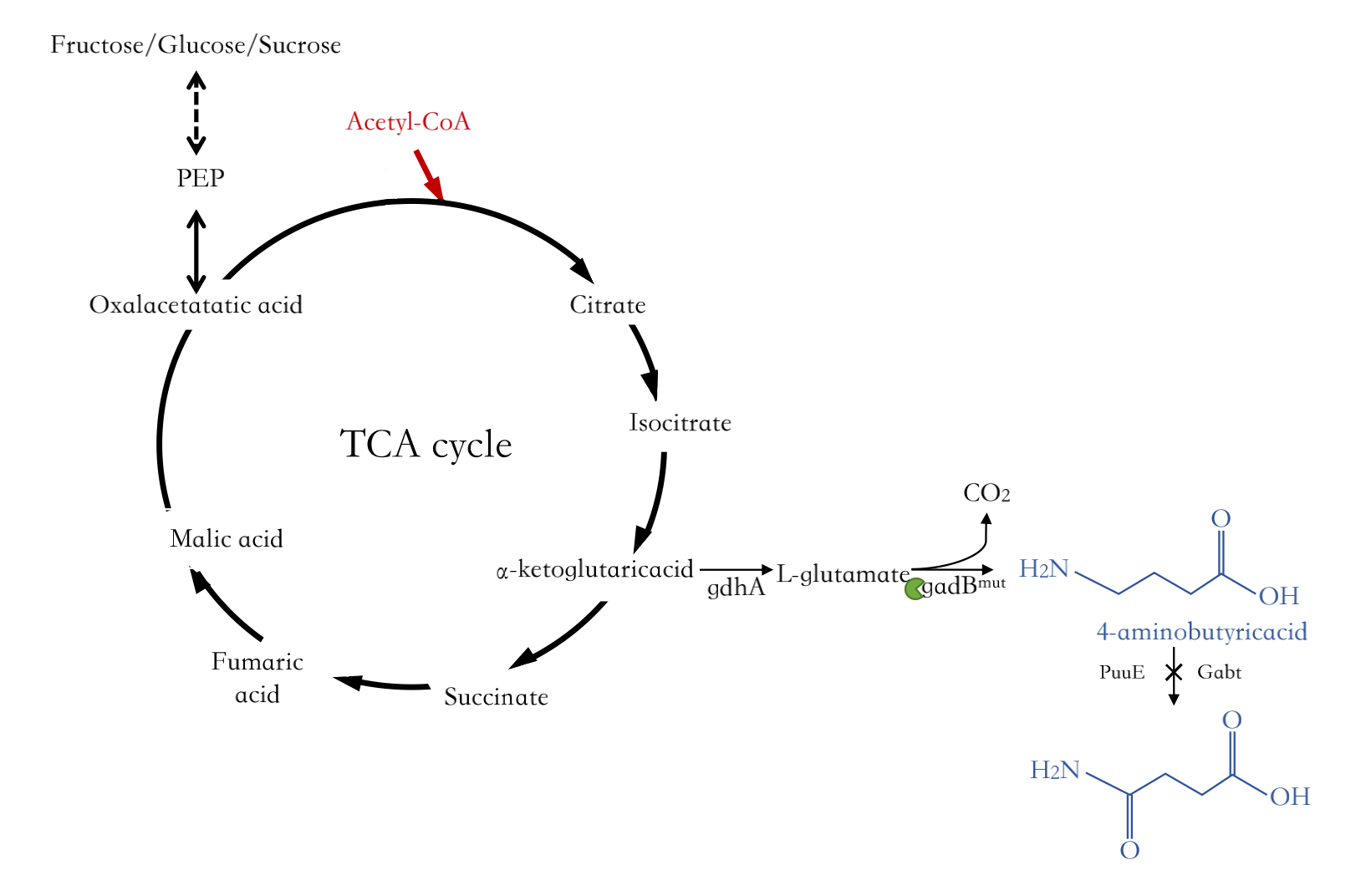 Concerning the wild-type GadB has an optimal activity at pH 4.5, which is not a suitable condition for cell growth. By mutating wild-type gadB to a mutant form (gadB E89Q Δ452-466), the mutant GadB protein is active in a wide range of pHs, allowing a better GABA yield.

We selected the gene gadB-E89Q+z452-466 and gene gdhA, and used the promoter pLlacO1 and a T1 terminator to drive and terminate their expression, respectively. After that, the entire sequence was introduced into pCS27 and yielded the recombinant plasmid Lac-gadB(mut)-lac-gdhA-T1. Below is the map of our plasmid. 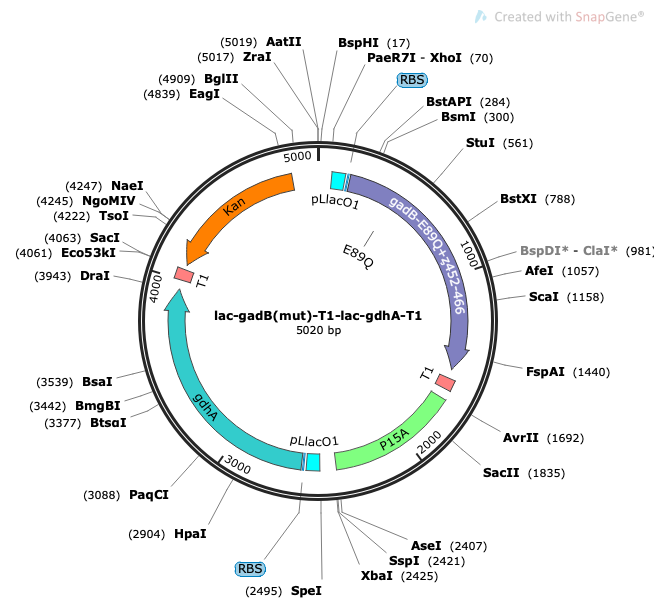 GABA produced by the engineered bacteria can bind to the ion channels of neurons to open the chloride ion channels, resulting in the influx of chloride ions and the hyperpolarization of cell membranes, thus inhibiting the generation of action potentials. Therefore, GABA can improve the situation involving over-excitation of the nervous system, such as anxiety and tension.
Part 3: our third part is producing 5-HTP

In E. coli, chorismate is a branching point for the synthesis of aromatic amino acids, and we inserted four related genes that facilitate the four-step transformation of this substance into 5-HTP. Tetrahydromonapterin (MH4) is used as the coenzyme of P4H. We also added the expression of PCD to create an artificial MH4 cycle and ensure the synthesis of 5-HTP. 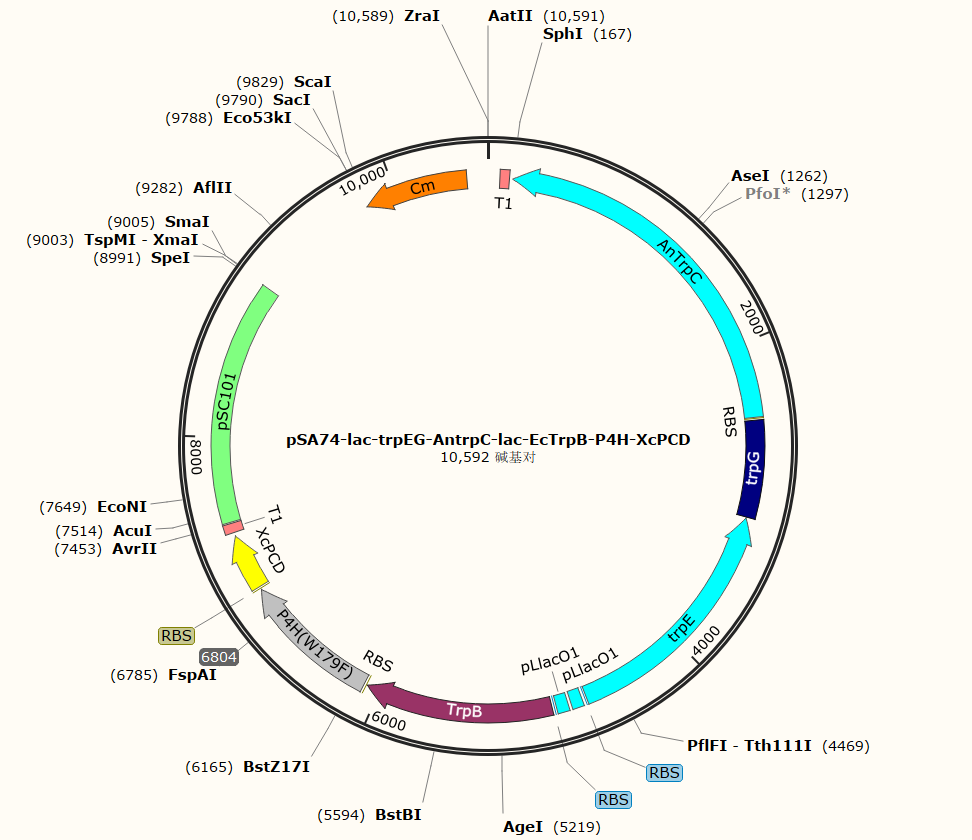 After entering the brain through the blood-brain barrier, 5-HTP is converted into serotonin, which in turn is converted into melatonin, which improves the host's sleep. Moreover, 5-HTP can suppress appetite, relieve chronic stress headache and promote the secretion of brain coffee, which is beneficial to people's mental state.
Part 4: The toxin-antitoxin system

Finally, given the biosecurity implications, we chose the toxin-antitoxin system, which envisions engineered bacteria surviving in low-oxygen, lactose-containing environments and committing suicide under aerobic conditions. We place a hypoxic promoter phyb upstream of the antitoxin gene to ensure that E. coli dies when it is not resistant to toxins under aerobic conditions.

The suicide process can be divided into two parts:

First, in the human gut, engineered bacteria will encounter dietary lactose, which could be metabolized into allolactose, an inducer of the lac operon in Escherichia coli and many other enteric bacteria. It binds to a subunit of the tetrameric lac repressor, which leads to conformational changes and lowers the binding affinity of the lac repressor to the lac operator, thereby causing its dissociation from the lac operator, allowing the expression of MazF. At the same time in the intestinal environment with low oxygen levels, the phyb promoter is on, expressing the MazE gene to neutralize the MazF toxins, allowing the engineered bacteria to survive.

Second, under aerobic conditions, the phyb promoter is immediately switched off, at which point the antitoxin gene is no longer expressed, the suicide system only expresses MazF, once the concentration of the toxin protein MazF reaches a critical value, it will induce bacterial death.