To confirm our bacteria have effects, we estimated the extent to which cinnamaldehyde diffuses when lactic acid bacteria synthesize it. From these results, we were able to determine the effective distance of lactic acid bacteria that actually exhibit antibacterial activity. We have extended the famous Fick's diffusion equation to three dimensions and predicted it by substituting the concentration of cinnamaldehyde that shows antimicrobial activity as determined experimentally.

Fick's diffusion equation in one dimension is as follows 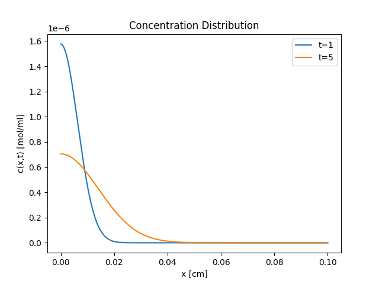 If the start time is t1=1s and the time just before swallowing is t2=5s, the range in which the lethal concentration of cinnamaldehyde against S. mutans exceeds 0.50 [mg/ml] (see wet), i.e., 0.61×10-6 [mol/ml], is recorded during this time when the distance x from the lactobacillus is 0≤x≤0. The distance x from the lactobacillus is 0≤x≤0.0089 [cm] and Q=5.0×10-16mol at this time.
From the above, it is desirable to synthesize 1.0 x 10-16 [mol/s] of cinnamaldehyde per recombinant lactic acid bacteria.
Next, we consider the case of cinnamaldehyde diffusing in a three-dimensional solvent. If the particle is at the origin at time t=0, and the probability of being in the range of r~(r+dr) after t time is c(r,t)dr, then c(r,t) satisfies the following diffusion equation.(This equation is defined by ①. ) 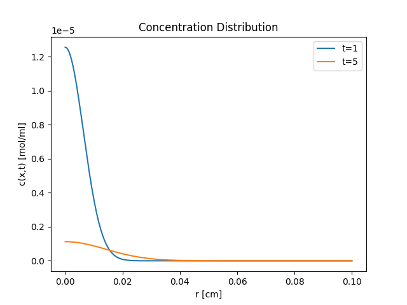