"We chose Lactococcus lactis as a chase. There are 2 reasons described below.

1. Suitable for probiotics
Nowadays, fermented foods attract people's attention and many kinds of probiotics hit the shelves. Among them, Lactic acid bacteria is known for its beneficial point for human health. Since there are a large number of bacteria in the oral environment, it is difficult to predict how exterior bacteria affect them. However, it is shown that Lactococcus lactis is harmless and suitable for probiotics.[1] Further more, the research shows L.lactis antagonize S.mutans.[2] L.lactis is the best chase for our project.

2. Genetically engineerable gram-positive bacteria
The most general chase for genetic engineering is E.coli, but we intended to use gram-positive bacteria because it doesn't have an outer membrane. Compounds are easy to be released and our parts, GbpC is need to be anchored to the cell wall. We looked for laboratory which is familiar with genetic engineering of lactic acid bacteria, and asked to use tools, such as plasmid DNA. Fortunately, it was a shuttle vector with E. coli, then we decided to conduct subcloning using E.coli and transfer complete plasmid into L.lactis.


Cinnamaldehyde is the main component of essential oil of cinnamon, and is effective in inhibiting various bacteria in our mouths. Cinnamon is particularly effective against S. mutans, the cause of tooth decay, compared to other essential oils [3]. On the other hand, cinnamon has long been used as a natural spice in East Asia and is safe for human health. Lactobacillus sakei is also resistant to it up to 0.5M [4], about a hundred times higher than the MIC of cinnamaldehyde against S. mutans (1000μg/mL; 7.6mM). Thus L. lactis is also considered to have the resistance to cinnamaldehyde.
A variety of mechanisms of action have been proposed. One of them is the inhibition of ATPase. ATP synthesis is restricted by cinnamaldehyde disrupting the proton gradient, leading to ATP depletion. Other effects include an increase in saturated fatty acids in cell membranes, denaturation of membrane proteins, and inhibition of cell division. Even at low concentrations that do not inhibit cell growth, cinnamaldehyde can prevent forming cavities by S. mutans. For example, the inhibition of lactate dehydrogenase(LDH), one of the key enzymes in the glycolytic system, reduces the rate of pH decrease depending on the concentration and the terminal pH values were higher than 5.5 by treating with a concentration of 250μg/mL cinnamaldehyde [5]. Quorum sensing, an intercellular communication system that is essential for biofilm formation, is also inhibited by cinnamaldehyde downregulating the ComDE system. As a result, the development of resistance to cinnamaldehyde is hindered and the effectiveness of other drugs is increased.

In our project, we designed genetically modified L. lactis to produce cinnamaldehyde in the mouth to inhibit S. mutans. We inserted three genes encoding the required enzymes, phenylalanine-ammonia lyase EncP from Streptomyces maritimus(SmPAL: BBa_K4019001), 4-coumarate-CoA ligase from Streptomyces coelicolor(ScCCL: BBa_K4019002), and cinnamoyl-CoA reductase1 from Arabidopsis thaliana(AtCCR: BBa_K1129005). SmPAL and AtCCR are already registered parts in iGEM by UBC 2013, but this time we added a new parts named ScCCL in between. We utilized ScCCL instead of 4CL in order to improve the production of cinnamaldehyde[6] and to cause more damage to S. mutans.


Bacteriocin biosynthesis system
It is known that some of the gut bacteria prevent growth of S.mutans.[7] Among them, we focused on Lactiplantibacillus pentosus H99. It produces a kind of bacteriocin, and we found that it has an antibacterial effect against S.mutans. We got the bacteriocin synthesis gene(BBa_K4019011) cluster by PCR cloning, and enabled engineered bacteria to produce bacteriocin in large quantities. Gene cluster includes 4 gene, Bacteriocin precursor, Bacteriocin immunity protein, Ped/BrcD family Bacteriocin maturation disulfide, and ABC transporter ATP-binding protein. 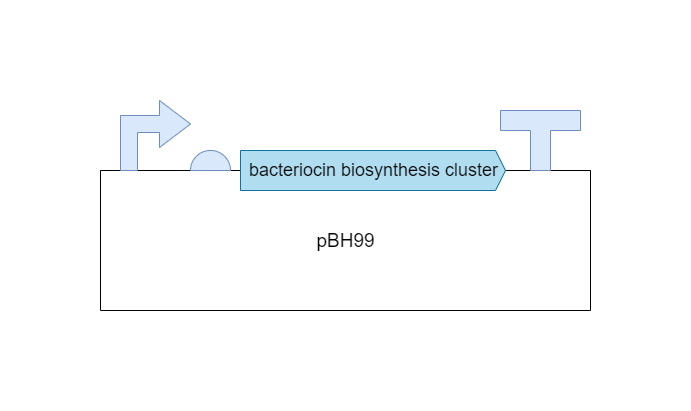 
Glucan-binding protein C expression system
We use Glucan-binding protein C(GbpC: BBa_K4019004) as adhesion against oral biofilm. GbpC is expressed on the surface of S.mutans and it is important for aggregation. S.mutans also have Glucosyltransferases(Gtfs). They are enzymes to produce glucan polymers from sucrose. Glucan polymers play a role as glue, which is scaffold to gather on the tooth surface and bind S.mutans each other. Gbps have an ability to bind specifically to the glucan and help S.mutans to be piled up. Among Gbps, only GbpC is a surface-anchored protein, and it is especially known to be related to aggregation.[8] We expect that engineered bacteria with GbpC can sneak into biofilm and release antimicrobial agents effectively. Moreover, it inhibits quorum sensing by decreasing density of S.mutans. Therefore, GbpC has a important role to inhibit biofilm formation. The sequence of the GbpC have been revealed.[9] It includes a putative promoter sequence, so we decided to use the sequence from beginning to the end of the coding region. The sequence also includes ribosome binding site and LPXTG motif region. We chose sfGFP(Bs)(BBa_K1365020) as a reporter gene of gbpC. sfGFP(Bs) is optimized for Bacillus subtilis and confirmed to show high fluorescens in Lactococcus lactis by iGEM14_Groningen. We are also considering using this system for biofilm assay. 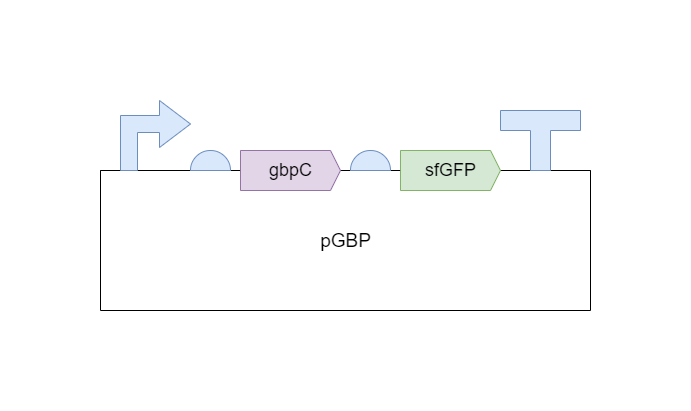