We aim to develop recombinant probiotics which continuously prevent dental caries. As stated previously, the main cause of dental caries is biofilm formation by S.mutans. We considered to inhibit it by recombinant Lactococcus lactis which bind to oral biofilm and release antibiotics. The biofilm formed by S. mutans contains glucan in its matrix. Our recombinant L.lactis expresses the protein, Glucan-binding protein C that specifically adheres to glucan on the surface layer of S.mutans, and produces compounds (cinnamaldehyde and bacteriocin) that have antibacterial activity against S. mutans. By secreting them, it inhibits the formation of oral biofilm by S. mutans. Our recombinant L.lactis have four strong points.

It can affect to the place where S.mutans are aggregating directory and closely. It is difficult for drug to be inside the biofilm because the biofilm has thick layers and matrix. However, our recombinant probiotics can creep in the biofilm and exhibit effect. It is more effective and efficient.

Cinnamaldehyde and bacteriocin are harmless for human. Because our recombinant L.lactis are designed to bind to biofilm, it is flown away by saliva without biofilm. Therefore, It doesn't affect other healthy cells or good bacteria. In addition, we have several plans to prevent spreading of engineered bacteria. To see more, go to Biosafety>>

Since the bacteria can produce compounds continuously and they proliferate in the mouth, it maintains effect longer than drug.

To prevent dental caries, we have to brush our teeth every day and go to the dental clinic regularly to remove dental plaque which can't be removed by brushing. However, in our measure, all you have to do is just taking some tablets. It is so easy that anyone from kids to physically disabled eldery can use it. And also, it is a good way for people in developing countries which don't have sufficient dental services.


We believe that our recombinant probiotics contribute to the world which has no dental caries. 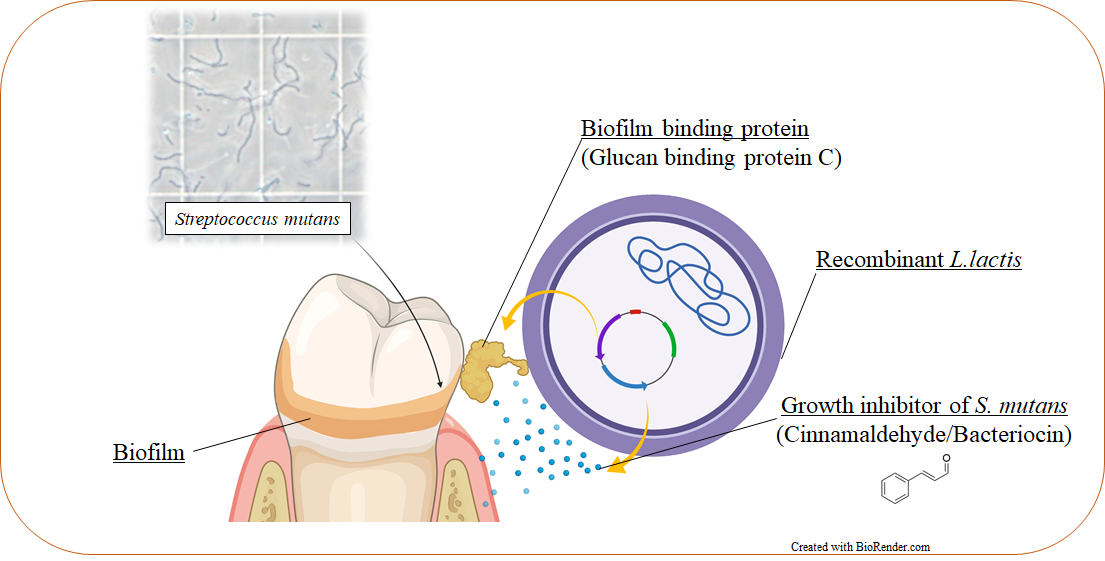