Engineered bacteria must not be allowed to affect the natural environment.
We have to use strict containment mechanisms.

We need to dispel citizen's mental disgusting and let recombinant probiotics be accepted by society.


To tackle these issues, we did some activities as follows.

Project decision
In the project decision, we were thinking about its feasibility and usefulness. Our PI, Prof. Tagawa heard about it from Prof. Yoshida(University of Hokkaido), whom he knew. He said that something similar was written in the innovation roadmap for dental care in Japan.[1] When we looked up the roadmap, we found that the eradication of tooth decay and periodontal disease through the transplantation of beneficial bacteria would begin between 2026 and 2032. In our project, we thought of using genetic recombination technology to add new functions to enhance the effect of the good bacteria, but we found that the idea of introducing cavity-preventing bacteria into the oral cavity from the outside was realistic. We also received comments on the use of cinnamaldehyde as an antibacterial substance. The cough drops currently used for oral cleaning are used in low concentrations because of their negative effects on the oral mucosa, and they are quickly washed away. Therefore, they are not very effective in removing bacteria. On the other hand, cinnamaldehyde is derived from natural cinnamon and is a healthy ingredient. In addition, if it can be made to have the ability to settle in the oral cavity, it could be highly effective against the bacteria that cause tooth decay.

Experiment
Due to the pandemic, we were only able to experiment for about two months. There was also the problem that the accomplishment of recombinant experiments using L.lactis was lower than that of E. coli. Therefore, we decided to first assemble each part in E. coli and then transfer the host to L.lactis. However, since it was not so easy to assemble the parts in E. coli, we decided to confirm the function of each part once we succeeded in cloning them.

Interview
After discussing several safeguard strategies, we interviewed several researchers to get their expert opinions. As a result, we were able to notice problems and areas for improvement in our project. Specifically, we realized that it is not easy to establish the fungus from the outside and that we have to be very careful to consider all possibilities to prevent its spread. Although there are still many issues to be addressed in the practical application of recombinant probiotics, we believe that there is a good chance that this will be realized by developing technologies that will provide solutions and remove people's concerns.

Education
Although there are still many issues to be addressed in the practical application of recombinant probiotics, we believe that there is a good chance that this will be realized by developing technologies that will provide solutions and remove people's concerns. 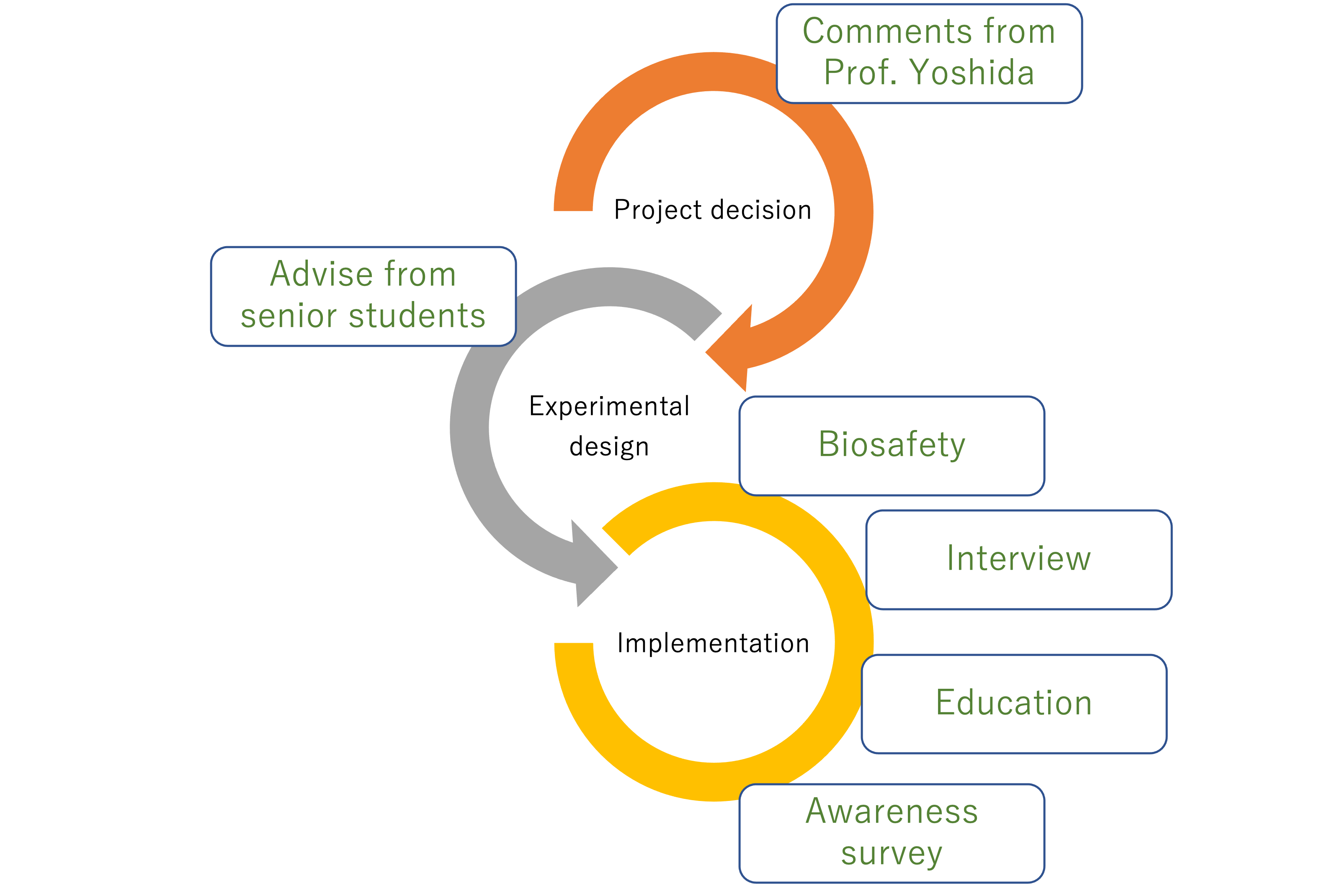