Design
After deciding on the project theme, we needed to decide on the enzyme to use. Based on the structure and bio-metabolism of cinnamaldehyde, we thought that a synthetic route from L-phenylalanine would be practical. The enzymes that synthesize cinnamaldehyde had been registered by previous teams, but based on the paper[1], we attempted to replace one of the enzymes with a different enzyme in this project.

Test
The three enzyme genes designed for cinnamaldehyde synthesis were synthesized by HiFi assembly and confirmed by inverse PCR. There were some difficulties in this, such as vector preparation. In addition, the efficiency of transformation into lactic acid bacteria was also measured by the shuttle vector pMG36e. Diffusion modeling, on the other hand, was performed by extending the famous Fick's diffusion equation to three dimensions.

Learn
We transformed E. coli beforehand because experiments showed that the transformation efficiency of L.lactis was low. In modeling, it indicated that synthesis 1.0×10-11[mol/s] of cinnamaldehyde per recombinant lactic acid bacteria was desirable.

Details of the experiment

Broth Dilution Method
We made two-fold dilutions of antimicrobial agents* on the 96-well plate and added TSB and overnight culture of S.mutans and Listeria Monocytogenes(Control) each well.
*We purchased cinnamaldehyde from Wako, and bacteriocin was purified from broth of H99 and quantified concentration by OPA.

Fig. 1 MIC of cinnamaldehyde and bacteriocin

The critical concentrations for antimicrobial activity were 3-fold dilution for cinnamaldehyde and the initial concentration for bacteriocin. *n was added no antibacterial substances as a negative control.

Measurement of transformation efficiency
To confirm that our backbone plasmid works in L.lactis, we measured transformation efficiency. Lactococcus lactis subsp. cremoris NZ9000 was harvested in MRS medium and collected by centrifugation. Collected cells are washed with HEPES,sucrose buffer and suspended. The pMG36e was transformed into L.lactis by electroporation at 1500V/2000V/2500V. Transformants are spread on MRS agar plates with and without 4 µg/mL erythromycin. Colonies could be seen on the plates of 1500 V. Colony forming units was calculated as follows.

Bacterial strains and plasmids
E. coli DH5α was used for primary host of protein expression and production of antibacterial compounds. Lactococcus lactis subsp. cremoris NZ9000 was the final host. Detailed plasmid construction used in our project is below (Table 2).

The purified products of the three gene fragments and linearized vector were assembled by NEBuilder® HiFi DNA Assembly Master Mix (New England Biolabs, Inc.)(Fig. 1a,b). After reacting, the mixture was transformed to E. coli DH5α competent cells(TaKaRa) and spread 100µL on a LB plate containing 100 mg/L Erythromycin. The rest of the mixture was also used insert check PCR as a template. Insert check PCR is explained below(Fig. 1a,b).The plate was incubated overnight at 38℃. The next day, picking individual isolated colonies from the plate, they are inoculated with another LB plate containing 100 mg/L Erythromycin and stored at room temperature. After the colony was sufficiently proliferated enough, each colony was fermented in 4 mL LB liquid medium containing 100 mg/L Erythromycin. Each medium is treated by FastGene Plasmid Mini Kit (Nippon Genetics Co., Ltd.) to extract a recombinant plasmid, pCAB01, to check if fragments and vector were assembled properly (Fig. 3c).

(a) Construction of pCAB01. 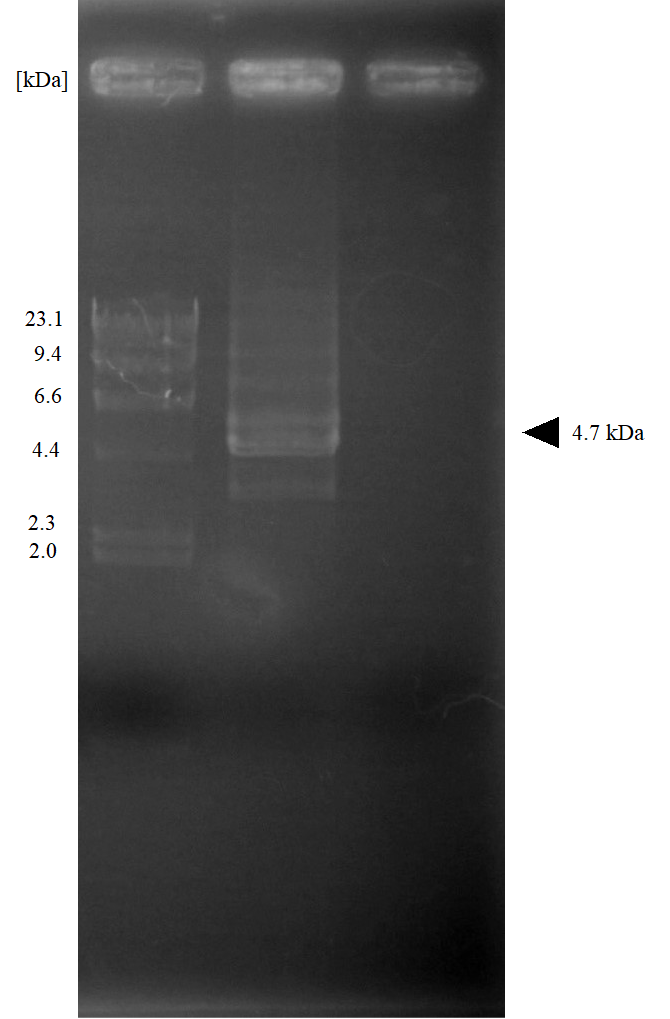 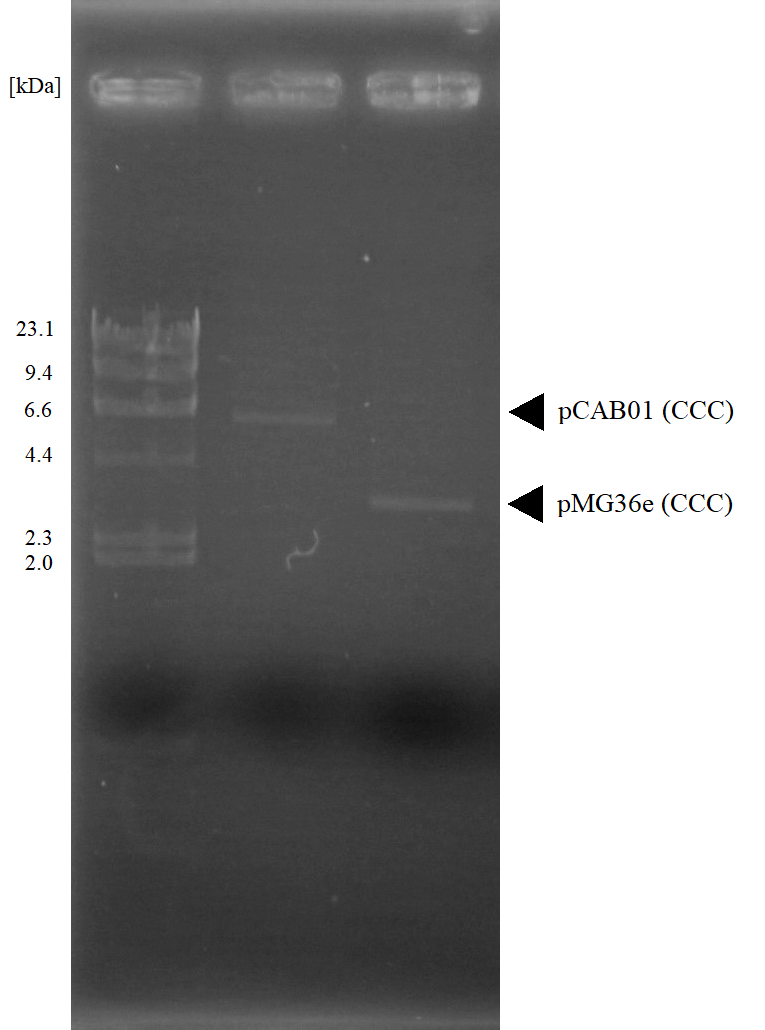 (c) pCAB01 was assembled and checked if transformation succeeded. The recombinant plasmid, pCAB01 was 7886 bp. These plasmids were considered the Covalently Closed Circular (CCC) form. The CCC form was run faster than the Linear form[1].

Bacteriocin biosynthesis gene plasmid
Bacteriocin gene cluster was amplified by polymerase chain reaction(PCR) with primers. Lactiplantibacillus pentosus H99 grown in culture(Difco Lactobacilli MRS Broth) was used as a template. The pMG36e and bacteriocin gene cluster were digested with restriction enzymes SacⅠ/PstⅠ. The pMG36e was purified by gel extraction and the bacteriocin gene cluster was purified by phenol-chloroform extraction. The purified products were assembled by ligation reaction and transformed into E.coli DH5α competent cells. Transformants were spread on a LB plate containing 600 µg/mL Erythromycin. On the next day, colonies were picked up and cultivated on the plate and in the 1 mL LB medium. Cloning success was checked by colony PCR and subcloned plasmid was extracted by miniprep.

Glucan-binding protein C expression plasmid
Glucan-binding protein C was amplified by polymerase chain reaction(PCR) with primers. Crushed Streptococcus mutans which was grown in culture(Bacto Tryptic Soy Broth) was used as a template. The pMG36e and gbpC amplicon were digested with restriction enzymes XmaⅠ/XbaⅠ. The rest of the process is the same with the cloning of bacteriocin biosynthesis gene cluster.

Transformation of Lactococcus lactis.
Transformants of E.coli which were confirmed by colony PCR or miniprep were cultured, and plasmids were extracted. The recombinant plasmid was then introduced into Lactococcus lactis subsp. cremoris NZ9000 by electroporation(1500V). The transformants were spread on MRS plates containing 4µg/mL erythromycin, and colonies appeared over 4-6 days.

1. Spot test assay
We layered soft agar with S.mutans as indicator bacteria on LB plate, and transformants with cinnamaldehyde and bacteriocin synthesis gene which was washed and suspended in PBS were spotted on the plate. We hoped that transformants would make inhibitory circles, but the S.mutans grew so slowly that we could not successfully see any antibacterial activity. 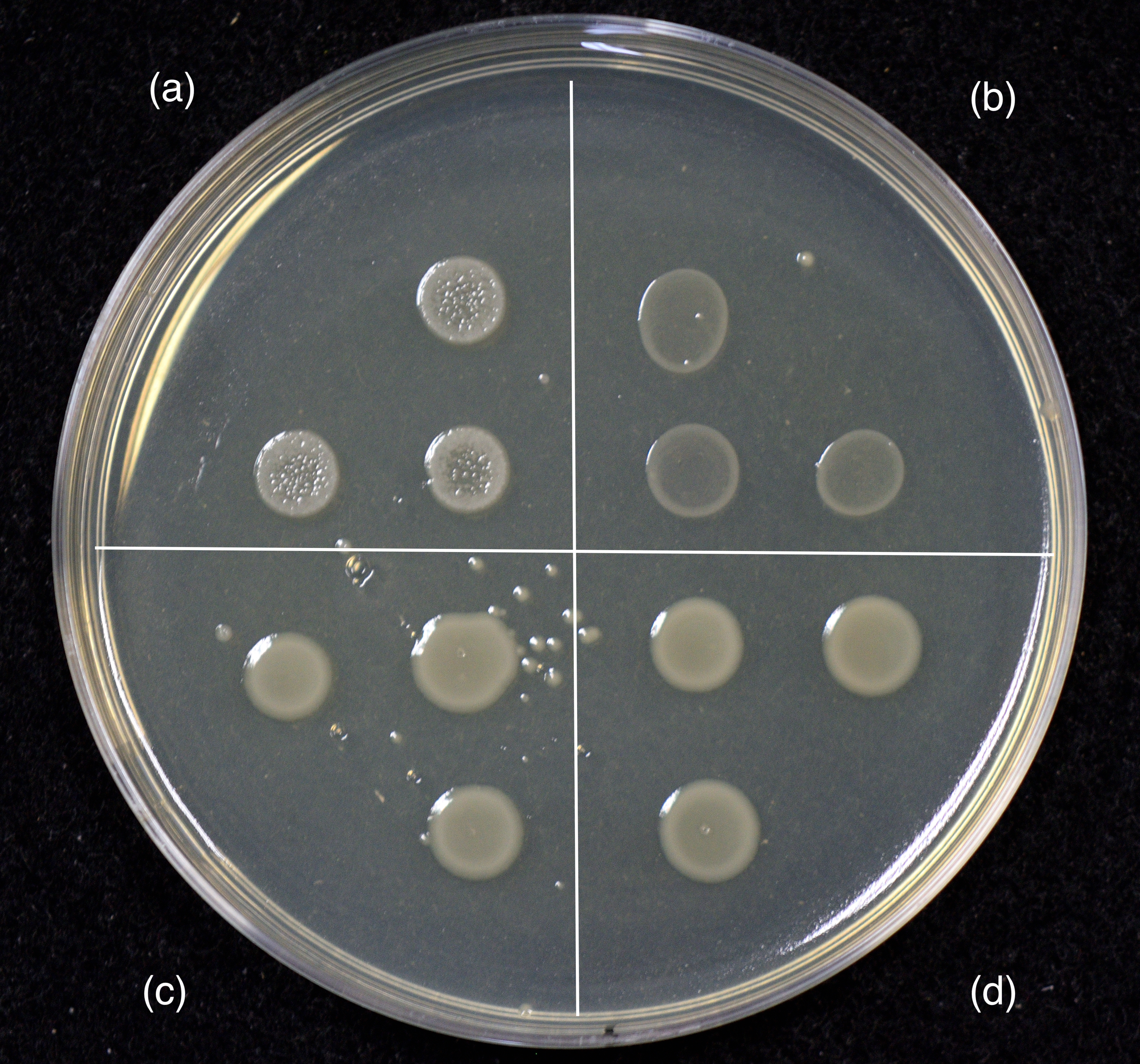 2. Viable/Dead bacterial evaluation
After CFDA staining of mutans bacteria fixed on dextran, recombinants which were washed and suspended in PBS were added, incubated, washed and PI stained. However, there was not much difference from the host used as a control. The bacteria were washed to remove antibiotics in the medium, but it is thought that the addition of medium was necessary because substrates are required for the production of antibacterial substances. There was also the problem that S.mutans was detached from the plate after repeated washing, or that bacteria other than mutans were stained. Although the evaluation of antimicrobial activity did not go well, we would like to confirm the inhibitory effect of biofilm formation by conducting a biofilm assay.

Glucan-binding protein C
In order to evaluate the binding of the GbpC expression strain to glucan, we attempted to perform a dextran binding assay. Since the gbpC-expressing strain of recombinant L.lactis could not be cultured well, we tried to see if it would work with S. mutans, which expresses gbpC on its surface. Dextran was fixed on an immunoplate, and the culture medium of the S.mutans was added to it, incubated, washed, and CFDA staining was performed. A large number of S. mutans were observed in comparison to those using BSA instead of dextran as a control, confirming that S. mutans has dextran-binding properties. 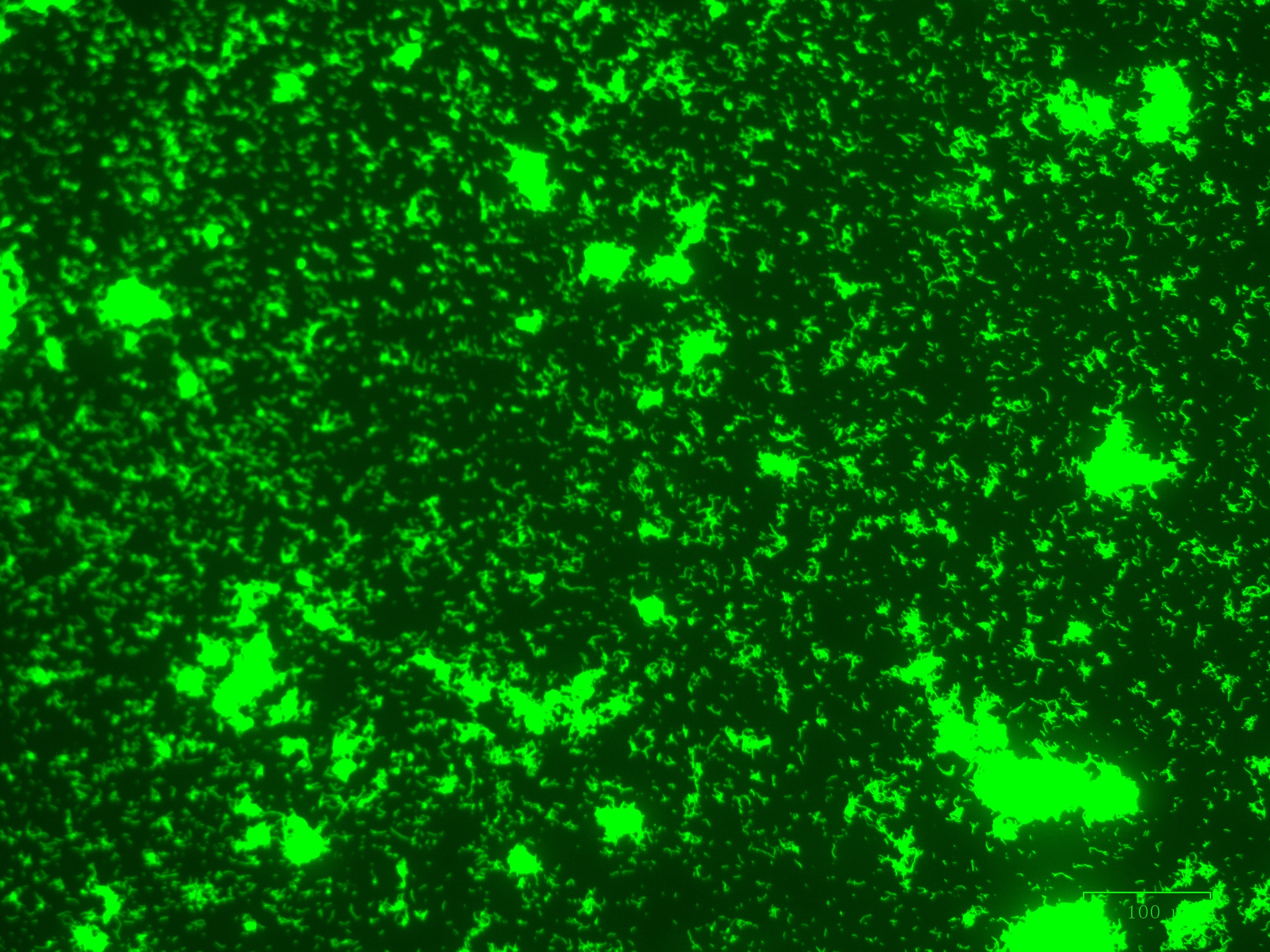 (a) S.mutans on the dextran fixed plate 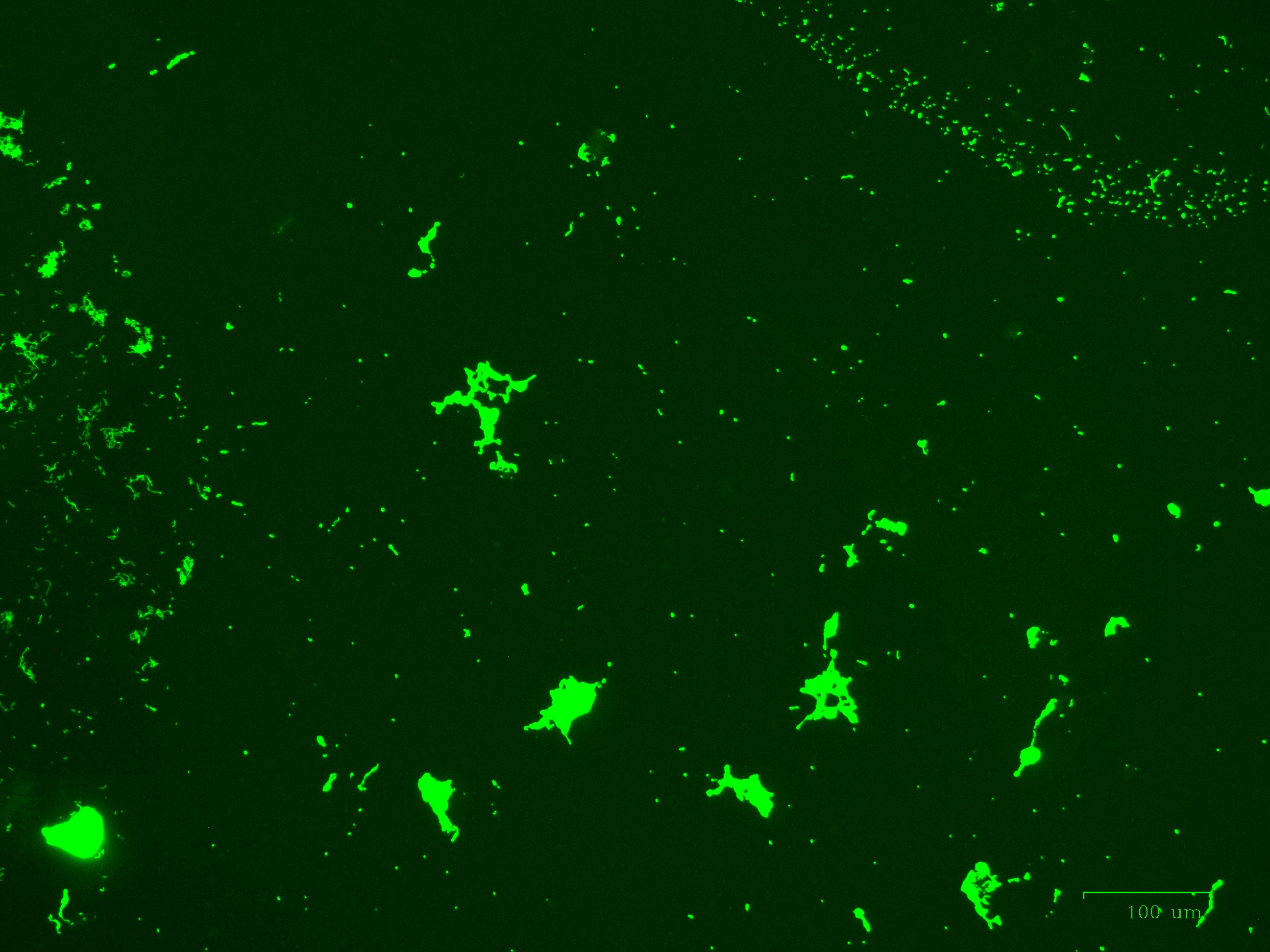 (b)S.mutans on the BSA fixed plate

Experimental difficulties
・Inverse PCR of pMG36e
We planned to prepare the linearized vector used construction of pCAB01 by Inverse PCR. We designed a proper primer, however, the vector was not amplified. We considered that this reason was high plasmid template concentration and non-specific primer hybridization. Therefore, We conducted improved experiments that plasmid template concentration was diluted gradually and the sample loaded in the Thermal cycler at first step temperature, 98℃.

・Double digestion by Xma1/Xba1
The shuttle vector we used had fewer restriction enzyme sites than the general vector for E. coli, and our options were limited except for the sites included in the inserted gene. Therefore, we decided to use Xma1 and Xba1 for the cloning of gbpC. However, either or both of these had poor cleavage efficiency, and it was not possible to perform complete double-strand breaks under normal reaction conditions, so we repeated cleavage and purification twice before performing the ligation reaction.

Analysis of Cinnamaldehyde production
The colony which maintained pCAB01 is dispersed LB liquid medium and incubated at 38℃. The strain is spined down and collected supernatant. The supernatant is added to ethyl acetate, a one to one ratio between ethyl acetate and supernatant. and then the ethyl acetate phase is collected and analyzed by High Performance Liquid Chromatography (HPLC).

Finally, pCAB01 is transformed from recombinant E.coli to L.lactis and measure the ability to diffuse cinnamaldehyde.