Improved Biobricks
Current experiments have validated that the PmrCAB system can be used to detect viral spike proteins, but given the low virus concentration in the environment, the detection sensitivity is not high enough to give rise to false negatives. To solve this problem, we improved the current biobrick by adding the quorum sensing system.
Quorum Sensing System

In the AHL mediated quorum sensing system composed of LuxI / LuxR, LuxI in bacteria is responsible for the catalytic synthesis of signal molecule AHL, and LuxR is activated as a receptor for this signaling molecule and forms the co-complex LuxR-AHL, which activates the corresponding promoter to regulate the expression of downstream genes.

The new part(BBa_K3896016) replaced the ACE2 receptor in the original part(BBa_K3611002) with DPP4 receptor, and was added LuxI/LuxR quorum sensing system. which needs to be used in conjunction with another part BBa_K3896017.

In this design, when the engineered bacteria recognize the virus, PmrC initiates the expression of the downstream gene LuxI and LuxR. Catalyzed by LuxI, AHL starts to be synthesized continuously and part of it penetrates the cell membrane to the extracellular. When the concentration of extracellular AHL reaches a threshold, it re-enters the cell and combines with LuxR to form a LuxR-AHL co-complex, the co-complex can activate the corresponding promoter Plux_HS and express the reporter gene EGFP.

Fig. 1 The plasmid was constructed to detect SARS-CoV-2’s spike protein

Fig. 2 The two plasmids were constructed with pETDuet-1 and pACYCDuet-1 as the vectors, and were co-transformed to E.coli BL21(DE3) to verify the QS system.

Firstly, IPTG was added to induce the expression of PmrB and PmrA, and then 9.4 ng/𝝁l of MERS-CoV spike protein was added, and the fluorescence intensity was measured every hour, and the following are the results four hours after the addition of spike protein. 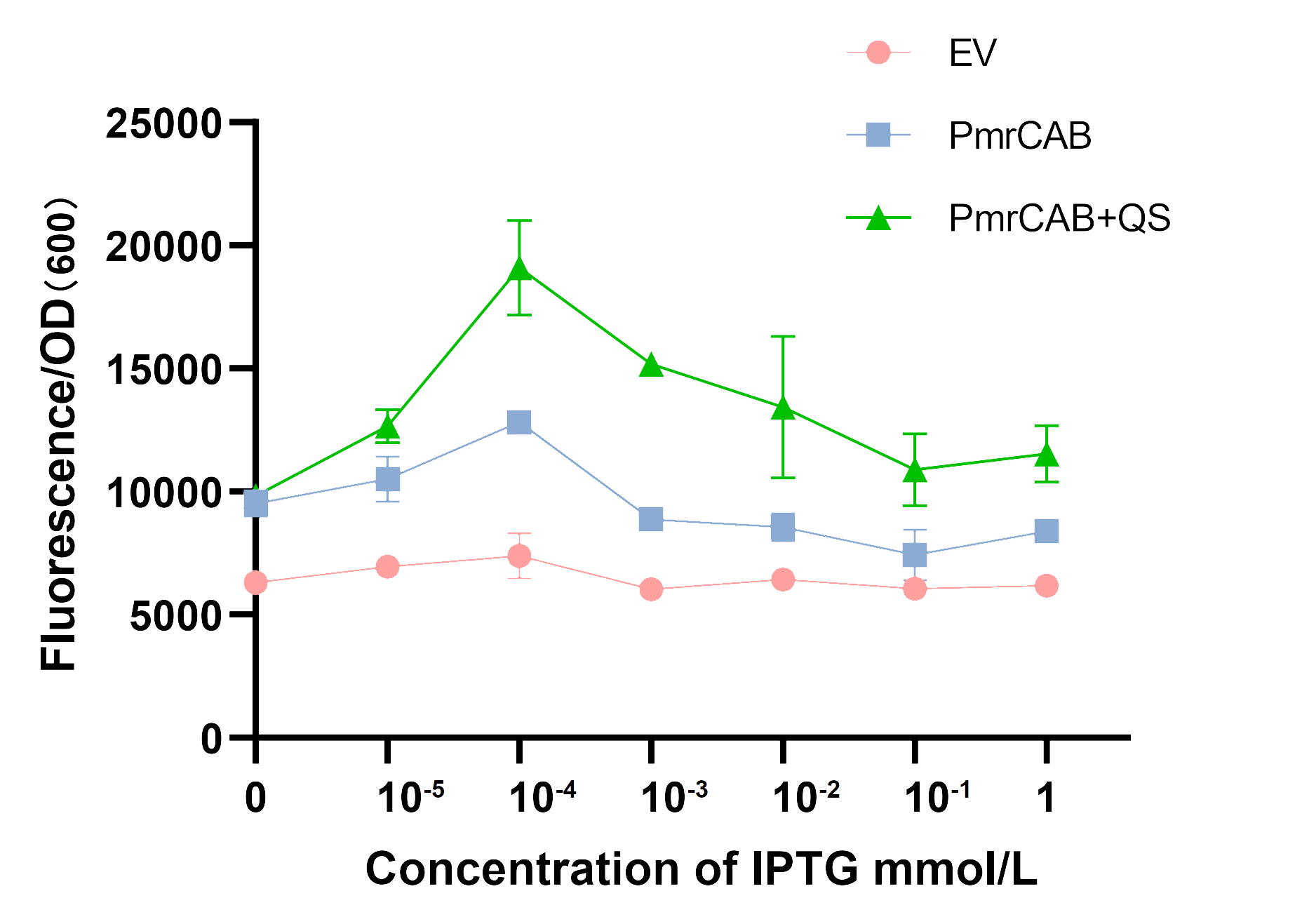 The above results show that even under low signal stimulation, the detection effect of the engineered bacteria with the addition of quorum sensing system is more significant, proving that quorum sensing system can solve the false negative phenomenon caused by low virus concentration in the environment to a certain extent.