The spread of the SARS-CoV-2 has had a tremendous impact on human activities. One of the main reasons why the spread of the virus is too difficult to control is that it often takes a few days after a person is infected with it before they have apparent symptoms, but in the days without the onset of the disease, carriers will move around freely in various high-traffic places and spread it, Then infected people will spread the virus to more people within a few days without developing the disease. This eventually leads to an outbreak. This characteristic is also found in the transmission of other coronaviruses. Therefore, real-time virus detection is necessary for high-traffic sites, and once the virus is detected in the air of a particular environment, immediate measures will be taken to isolate people who have been or gone there, together with other measures, to reduce the risk of outbreaks.

Our team have designed a hardware that can sample and detect the air in the environment. Once the virus is detected, the sampler will alarm. The device is generally divided into three parts, sampling system, titration system and detection system.

Sampling system
The sampling system is similar to existing ambient air samplers. It uses constant temperature and current sampling. The air sample is absorbed into the absorption bulb and the excess air is discharged through the liner.
Titration system
The general process of titration system is to titrate the solution to be detected in the absorption bulb into 24 wells (up to 96), and different wells can detect different indexes.
Detection system
The liquid in the 24-well culture plate is detected by fluorescence. If the fluorescence signal reaches the threshold , the alarm will be started. The overall detection method is similar to the microplate instrument. The 24-well culture plate will move along a certain trajectory, so that different pass through the light source respectively to achieve the fluorescence detection. 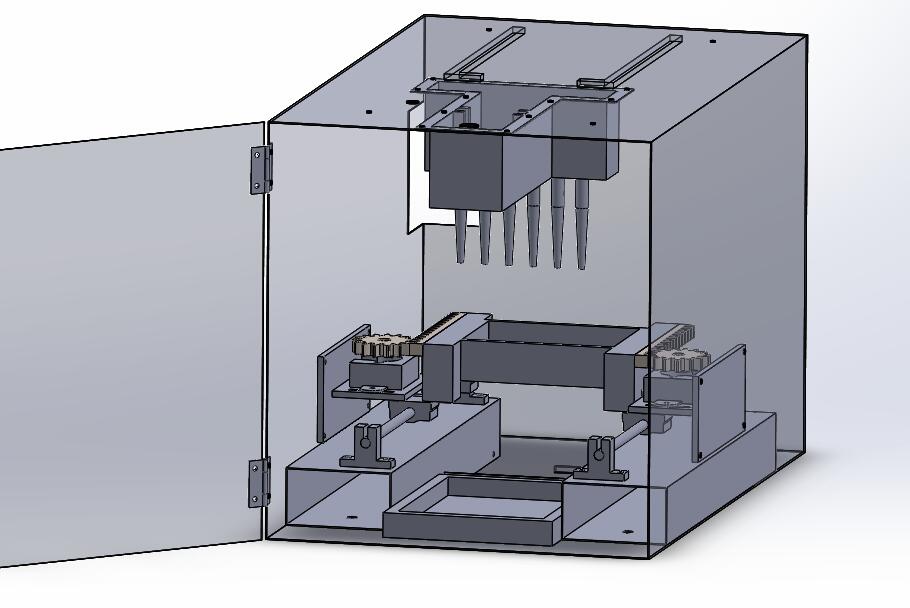 Upper layer - Circuit electrical equipment and control box (control box)
Since the working space of the main operation box (hereinafter referred to as the operation box) is required to perform the tasks of titration of enrichment solution and fluorescence detection, it will be in a long-time wet space operation. Therefore, in the design of the box structure, the circuit part that controls the hardware operation is assembled in a separate box (hereinafter referred to as the control box) on the upper part of the main box, and the control part such as the control buttons are mounted on the side of the control box. Different color buttons are installed in different holes on the box to display the operation process as described in the circuit introduction.

Intermediate mezzanine - Enrichment fluid conduction control and liquid flow titration equipment (T-box)
At the top plate of the running box, we installed a small T-shaped box (hereinafter referred to as T-box), which holds the inlet interface side of the buret glass tube that is in direct contact with the inside of the running box. The structure of the buret glass tube is designed for a mouthful of liquid inlet and six mouthfuls of liquid outlet; for the drip rate control, we use solenoid valves for automatic control. The enriched liquid in the air sampler is controlled by the flow rate through the solenoid valve, and is connected to the interface side of the glass tube in the middle sandwich with a flexible rubber tube as the transmission medium. The inlet port of the glass tube is encapsulated in the T-box and connected with the flexible rubber tube; the outlet port extends from the six round holes in the flat shoulder of the T-box, which can just correspond to the six holes of the 24-well culture plate underneath it, so as to complete the function of injecting the enrichment solution into different holes in the same row of the 24-well culture plate respectively. 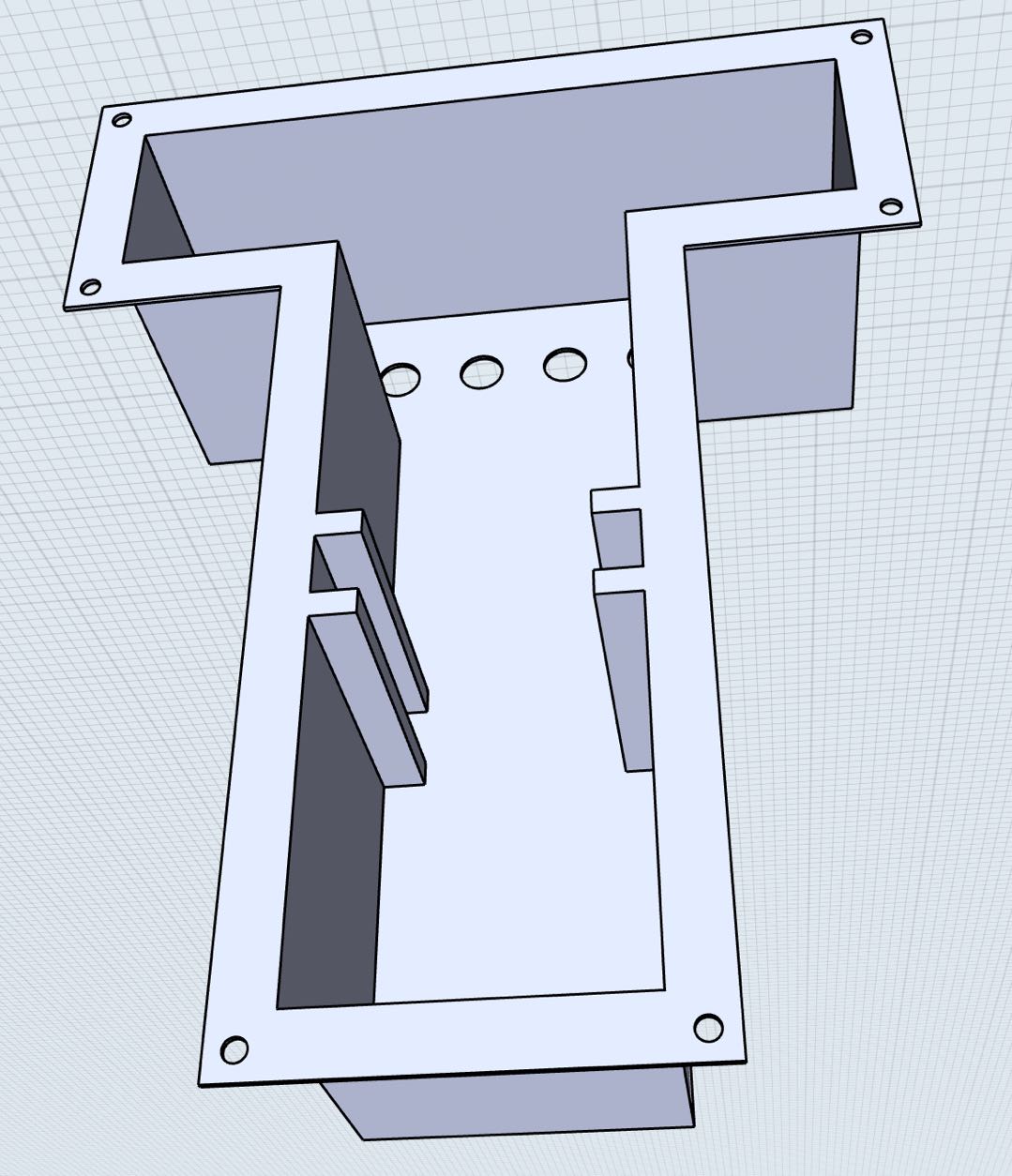 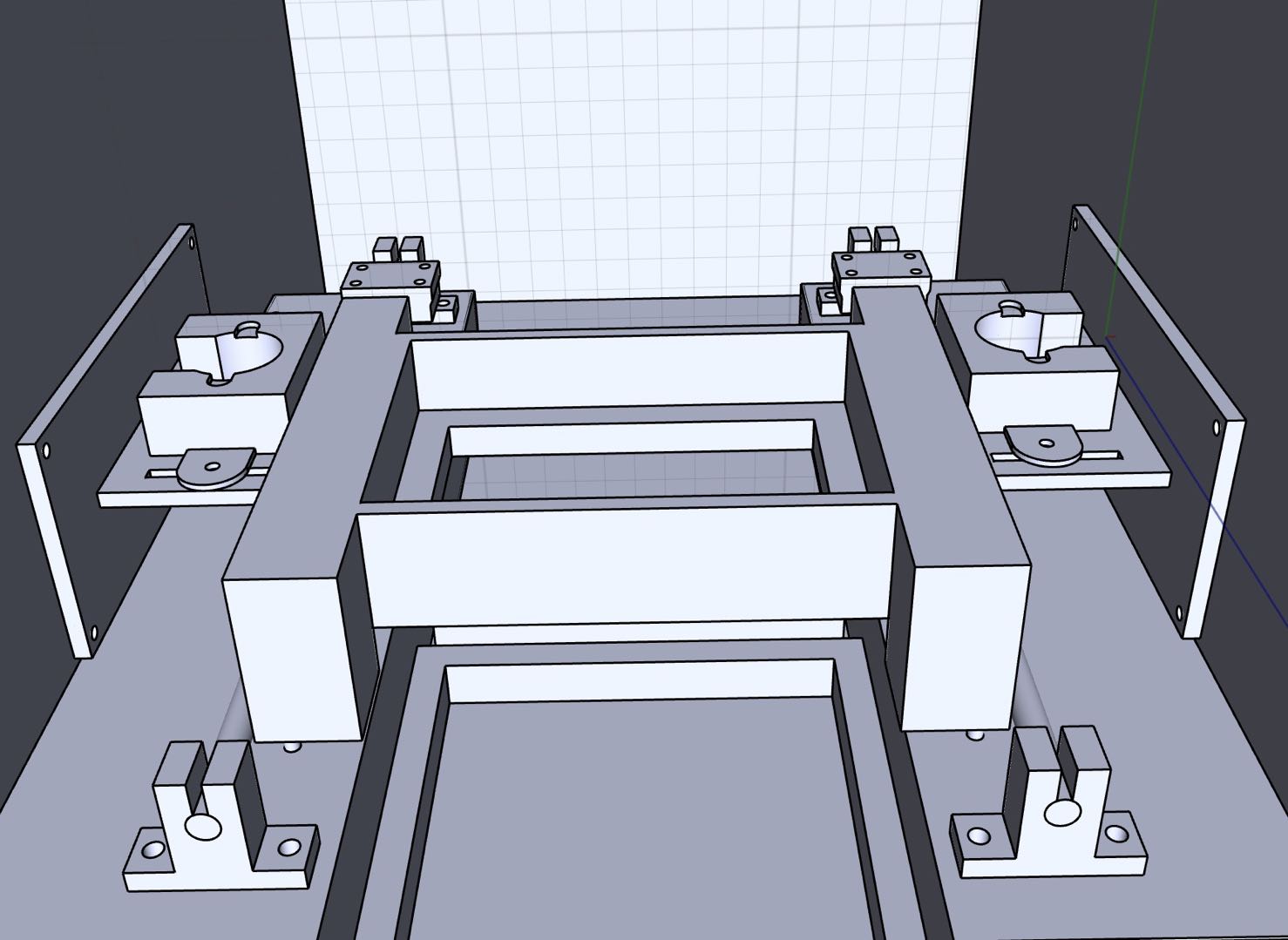 Lower layer - Leakage catch pan
During enrichment titration, if the liquid spills or splashes outside of the wells, it can lead to the trouble of requiring the operator to repeatedly wipe to clean the residual liquid at the bottom of the chamber and to disinfect it. Therefore, we elevated the entire part of the run function with two elevated plates on the left and right under the inner side of the run box, so that a space of a certain height is retained on the lower side of the 24-well culture plate being titrated. In this space, we placed an appropriately sized catch tray to directly hold the liquid that might spill during the titration or accidentally run out due to operational errors. If there is a lot of liquid in the tray, it can be removed and disposed of in a uniform manner.

The sampling system is similar to the existing ambient air sampler, using constant temperature and constant flow sampling, the air sample is absorbed into the absorption bulb, and the excess air is discharged through the tail pipe. It is worth mentioning that this device adds a virus-killing device to the existing air sampler. The air that does not enter the absorption bulb will pass through the high-temperature treatment box as well as the alcohol bottle and finally be discharged into the air, so that the air passing through this device is purified to a certain extent. 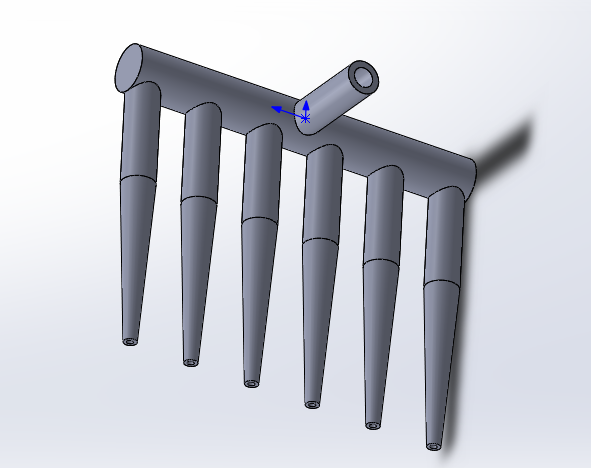 After the fluorescence detection part is finished, press the recovery switch, the motor will drive the 24-well culture plate carrier tray to return to the initial position and wait for the next operation.

Control module
In our circuit, stC89C51 is parted as the core control chip.
1. Clock circuit
Crystal oscillator is the core of the clock circuit. It is a kind of electronic component which can produce stable oscillation frequency. Oscillation frequency (whose unit is MHz) is the crystal oscillator’s basic parameter which determines the working frequency of the single chip microcomputer. We choose 12MHz crystal oscillator in our single chip with a clock cycle of 1/12us, and the machine cycle of 12* (1/12) us(which equals to 1us). There are 2 ports in the circuit. Once port XT1 is connected to the 18 pin (XTAL2) and port XT2 is connected to the19 pin (XTAL1), clock signal will be provided to the single chip microcomputer. The crystal oscillator circuit is shown in the figure below.

3. In-output circuit
Each I/O port of the MCU can be independently used as input or output. Stc89c51 includes four groups of I/O ports, namely P0, P1, P2 and P3. 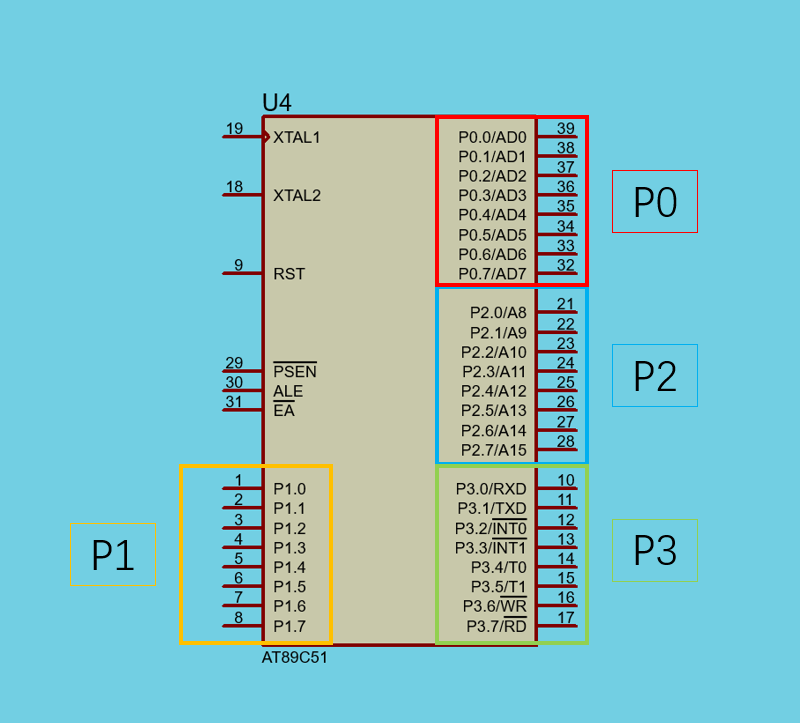 1. Input section
The input part of the main control board is set with a self-locking switch and a no-locking switch, which are input through port P1 of STC89C51. The circuit diagram is shown as follows.

The output module circuit of main operating board is shown in the following figure. 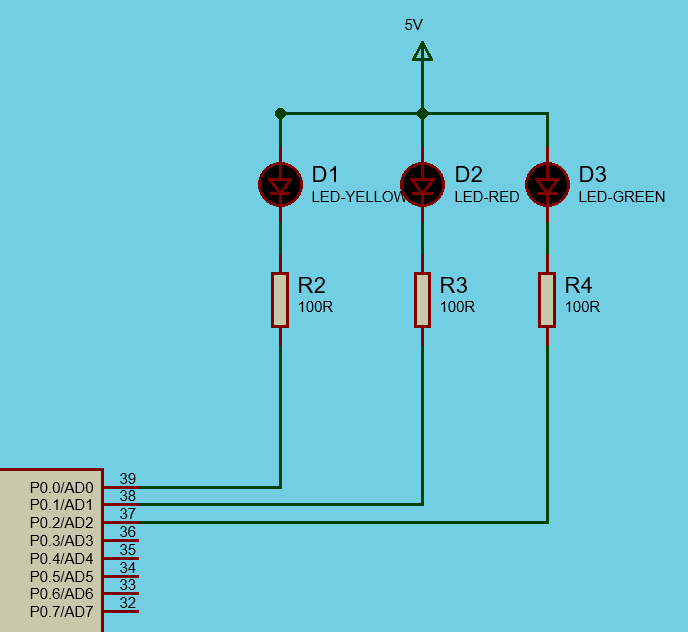 Action module
Step motor 28BYJ4, the main execution element in the modern digital program which can convert the pulse signal into angular displacement signal or linear displacement, is used to drive the movement of the 24-hole plate in the action circuit. The stepper motor can not be directly connected to the industrial frequency AC or DC power supply to work. It can only be started by using a special stepper motor driver, letting the drive unit directly couple with the stepper motor. In our instrument, the stepper motor 28BYJ4 is driven by ULN2003 drive plate, which will receive stc89c51’s output of P2 port. We also use two stepper motors 28BYJ4 to drive the 24-hole plate, which rotate in different directions respectively. The circuit diagram is shown as follows. 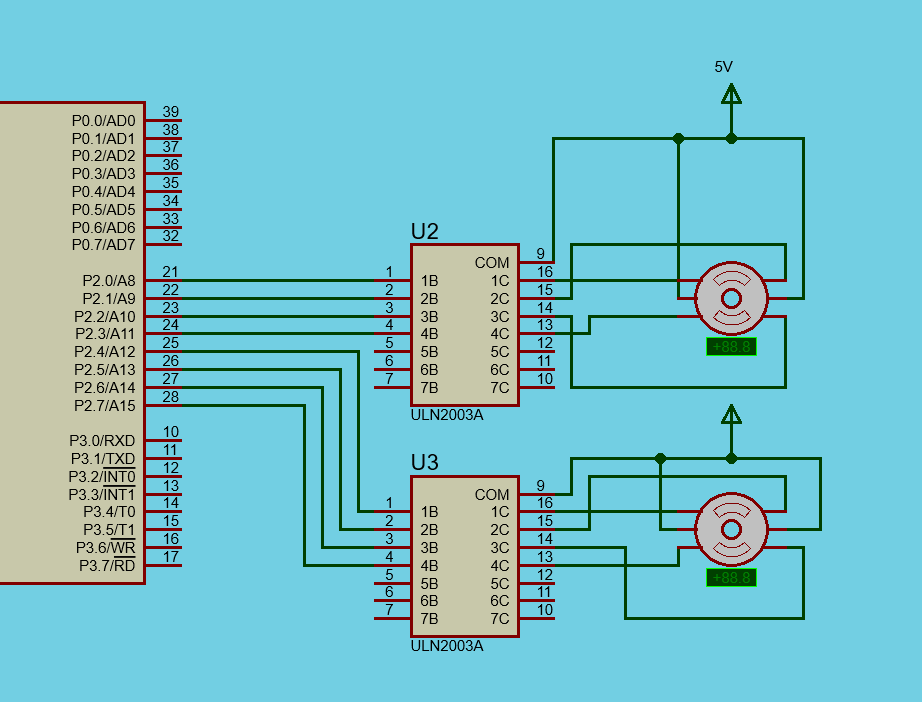 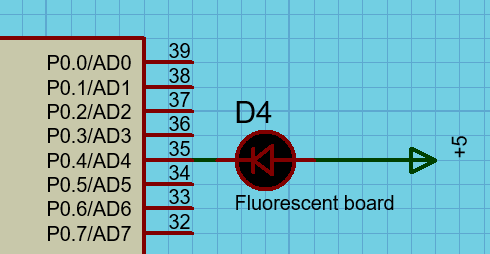 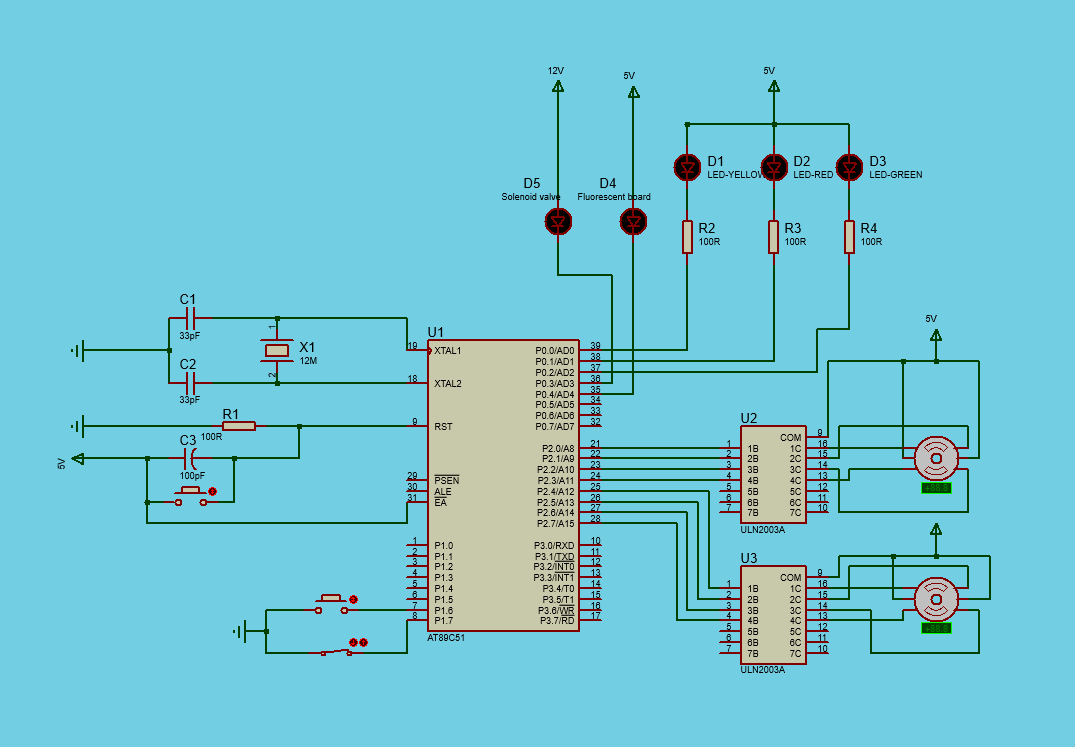 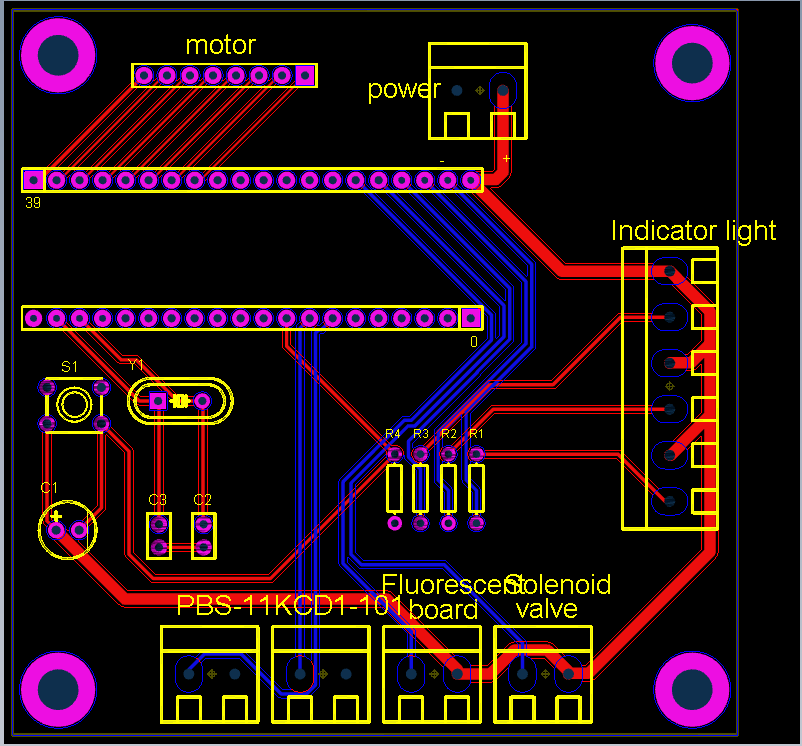 The 3D view of the PCB encapsulation is shown in the figure below. 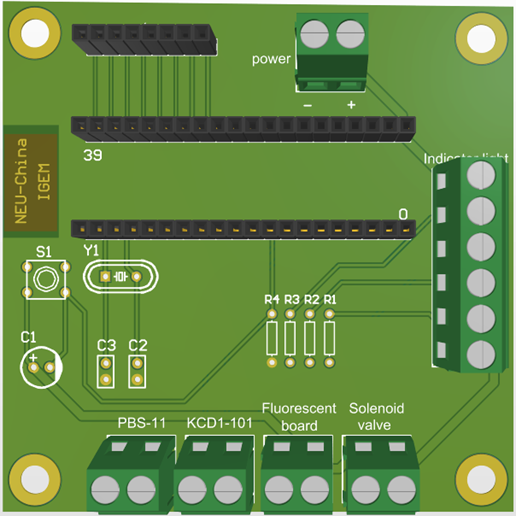 After designing our entire project, we took into account the practicality of the project. A few months ago, a popular snack in China was tested positive for SARS-CoV-2 which caused panic among the general public, and it was this problem that made us realize that the coronavirus can not only cause diseases threaten our health, at the same time, the unpredictability of its presence in the environment also leads to food safety problems that are closely related to our lives, making it more difficult for humans to fight against coronavirus. Therefore, a hardware that can detect viruses in the environment in real time will help us to prevent viruses effectively.

We visited a pig farm and learned that besides coronavirus, swine fever had also affected them greatly before, resulting in the death of a large number of pigs and heavy losses, while the detection methods used by pig farms were so outdated that they could only infer whether the virus was still present by trying to place healthy pigs in sterilized pens to see whether they would be infected. If we can adapt our hardware to detect more viruses in the future, we will be able to greatly help improve the efficiency of virus detection in the environment.

In order to solve these problems, our team designed a hardware. The whole process of hardware equipment from 3D design and circuit design to fabrication, assembly, debugging, trial run and official operation is all done by our team members. In order to ensure the safety of the self-assembled equipment and stability during debugging, we also set up some very effective parts with fault detection and debugging guarantee functions as well as convenient details for operation in the structure and circuit design, which can be found in the engineering drawings of 3D design and the circuit design diagram section. An identical device can be made according to the information we provide such as drawings and parameters.

In addition, improvements based on our team's hardware not only will hopefully enable real-time monitoring of more coronaviruses, and even more viruses, but also can provide a reference for future environmental virus monitoring. In the end, we will upload the assembly drawings of all parts.


Declaration of Originality
The hardware equipment of NEU_ China team was originally completed by the team members. The process from 3D modeling design, circuit design to fabrication, parts assembly, debugging, trial run, and official operation is all done by the team members themselves. This is hereby stated.