Target-AID system is a recently published tool to knock out specific genes in prokaryotic cells. gDesign is developed to design sgRNA for Target-AID[1]. By entering the name of the gene which you want to knock out, you can get a list of guides and primers by our gDesign software. Besides, the software will also rank the offered guides and primers.

You can download source code and the software here.

For biosafety considerations, we must ensure that our engineered bacteria will die as soon as possible after leaving the human intestine. Therefore, we decided to construct auxotrophic strains by knocking out (KO) specific genes that are cruicial to the survival of the bacteria.

Fortunately, a brand-new technology Target-AID has been developed[1], which is a dCas9-based base-editing technology. So far, it is the most suitable KO system for our biosafety experiment because it doesn't induce double-strand breaks. The only problem is that it lacks effective tools to design guide RNA, which is exactly the reason why we want to develop gDesign system: to help the sgRNA design for Target-AID system.

The Principle of Base-Editing

In the process of base-editing, sgRNA can be paired with the base complementary of the target sequence, and the Cas9 protein recognizes PAM sequence. The catalytically dead (dCas9) protein and cytidine deaminase or adenosine deaminase form a fusion protein. The dCas9 protein replace C with T at the target site under the guidance of sgRNA. In RNA, it is the substitution of C to U. Since the stop codons for prokaryotes are UAA, UGA and UAG, we can mutate CAA, CGA and CAG to stop codons to knock out genes.

Fig.2 Design for Target-AID part, the Target-AID protein is preceded by the ParaBAD (i.e. Arabinose promoter), which has very little leakage feature

Fig.3 Design for sgRNA part, the sgRNA is preceded by a constant promoter, J23119.

The Principle of Base-Editing

In addition, different sgRNA sequences will be scored and evaluated. For comparison in the process of scoring, we have crawled NCBI to obtain complete genome sequence. The scoring dimensions include: (1) Whether it is highly overlapped with certain sequences in the genome, triggering off-target effects. (2) The farther to the front, the more useful the sgRNA is. Finally, the sgRNA list will be presented to users in the descending order of the score and so as the designed primer. 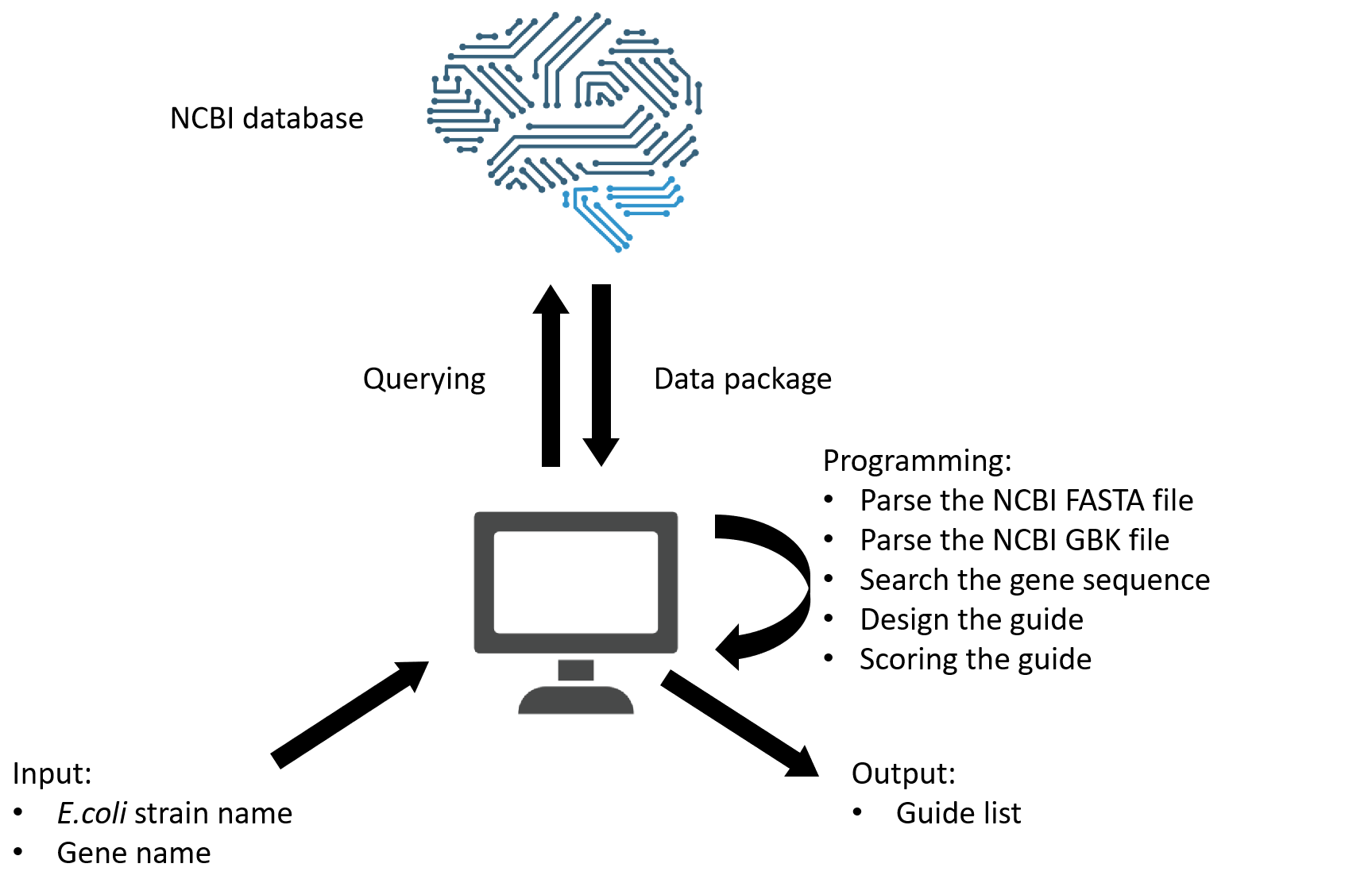 Fig.4 The basic algorithm for P2N

Firstly, gDesign keeps up with the technology frontier. It is developed for a brand-new system - CRISPR Base-editing system, which lacks effective tools to design guide RNA. What's more, considering the off-targeting effect, gDesign can score and rank a variety of generated sgRNA sequences to avoid such effect as much as possible.

Using our gDesign software paired with Target-AID system, we can easily mutant most genes we what in E.coli, which shows great potential in biosafety (see Safety-Auxotroph Construction for detailed).

Fig.5 The UI surface of gDesign, the arrows show how to use gDesign.