Safety has always been the first priority of our team. Apart from ensuring our own safety in laboratory by taking every necessary safety protections (like wearing lab coats and gloves) and consulting with our advisors before conducting experiments, we need to make sure the material we use will not cause harm to the environment. Since most reagents and laboratory waste are collected and processed by the School of Life Science, Tsinghua University, the major safety concern stems from the engineered bacteria and materials that we proposed to be administrated into living creature.

To be more specific, we realized that safety issues could exist in two dimensions. Firstly, we need to consider the environmental risks of our strains when released to the environment to comply with the green development concept and requirement. To achieve this, we designed our strains to be auxotroph so that they are unable to live outside the intestinal tract. In this way, even environmental release happens, the engineered strains will not cause much harm to the environment. Please check out our Target-AID system to see our efforts in this direction.

Secondly, although we have taken every possible steps to ensure the safety and non-toxicity of our delivery reagents and engineered strains, we need animal experiments to prove its safety inside living creature to make future clinical trials possible. Please check out our in vivo validation for more information.

As we have stated, our project is about engineering E. coli and L.lactis to fight against IBD. Although our engineered strains are highly unlikely to cause any environmental harm, we considered to further guarantee the biosafety of our strains by introducing auxotroph. This means the engineered strains will be unable to grow outside the intestinal tract of patients, and therefore even in very rare cases of environmental release, they will not grow in the environment to cause any risk.

We first considered using CRISPR-Cas to deactivate the carbonic anhydrase gene. However, the limitations of using CRISPR-Cas system in prokaryotic cells (e.g., high lethality rate) made us think about other possible routes. We then came to another gene editing technic called “Target-AID” that have been developed for gene editing in E. coli[1].

In Target-AID system(Fig.1), a cytidine deaminase called pmCDA1 is fused to catalytically dead Cas9 (dCas9) to form a fusion protein. The fusion protein will be guided to the desired gene loci under the guidance of designed sgRNA. Instead of creating double-strand break (DSB) at DNA target sites as what Cas9 does, the dCas9 part of dCas9-pmCDA1 only binds to the DNA and catalyzes the conversion of cytosine to uracil through deamination. This C-to-U editing will replace the previous amino acid-encoding codon with a stop codon, and the protein will not be synthesized normally as a result. In this way, we can achieve the loss-of-function editing of carbonic anhydrase gene.

This system is convenient and more efficient than CRISPR-Cas9 system in E. coli, and has been used widely in laboratories that work on E. coli gene editing. We noticed that the design of sgRNA is crucial to the success of this system, which is usually achieved manually and therefore requires experience in CRISPR-related fields. To make this system easier and friendlier for potential users who might lack enough experience, we designed a software that can help the design of sgRNA based on the principles of Target-AID system. Please check out the details in our software pages
We had designed 5 pairs of gRNA as followed：
1.(95) CGCAAAAACCGCGCTTTCTA (114)
2. (311) TACAAGCCGCAGTTGAAAACC (331)
3.(491) TGCAATCAGCGTGGAAACGC (510)
4.(512) GGCAGAAAGTTACCATTCACGGC (534)
5.(506) TTCCACGCTGATTGCATAATGG (485) -antisense sequence


However, we didn't get the mutation as we expected. Carbonic anhydrase-deficient mutants can only survive with enough supplement of bicarbonate radical ion. In previous work, carbonic anhydrase-deficient mutants were cultured in bacteria incubator with 5% CO2[2]. Unfortunately, our lab isn't equipped with the bacteria incubator, so we tried to add extra NaHCO3 in LB as compensation. Originally, our bacteria contained two kinds of plasmids, as is shown in Fig.2. 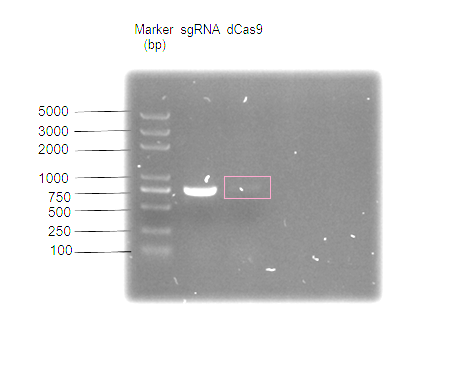 But after culture in medium containing NaHCO3, we found that our bacteria had lost the dCas9 plasmid(anti-streptomycin), which meant that streptomycin lost its activation(Fig.3). 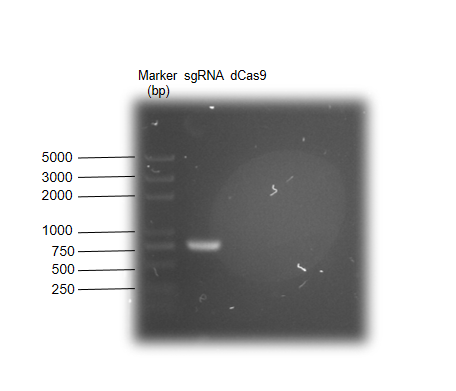 We speculated that the change of pH in LB containing NaHCO3 might have caused the inactivitation of streptomycin. We have not come up with other feasible plans to culture carbonic anhydrase-deficient mutant without a cell incubator.[3]

In summary, we have used Target AID system to avoid potential environment risk of our engineered bacteria by introducing a stop codon inside the encoding region of carbonic anhydrase to ensure that the bacteria are unable to survive outside the intestinal tract. It is noteworthy that our approach is a general strategy that is not limited to carbonic anhydrase. Instead, we have found many proteins that can serve as the editing target here to construct the auxotroph(Table.1). We chose carbonic anhydrase as an example for proof-of-concept and we envision that future iGEM team can use the same or similar strategy to tackle biosafety issues when using engineered bacteria. 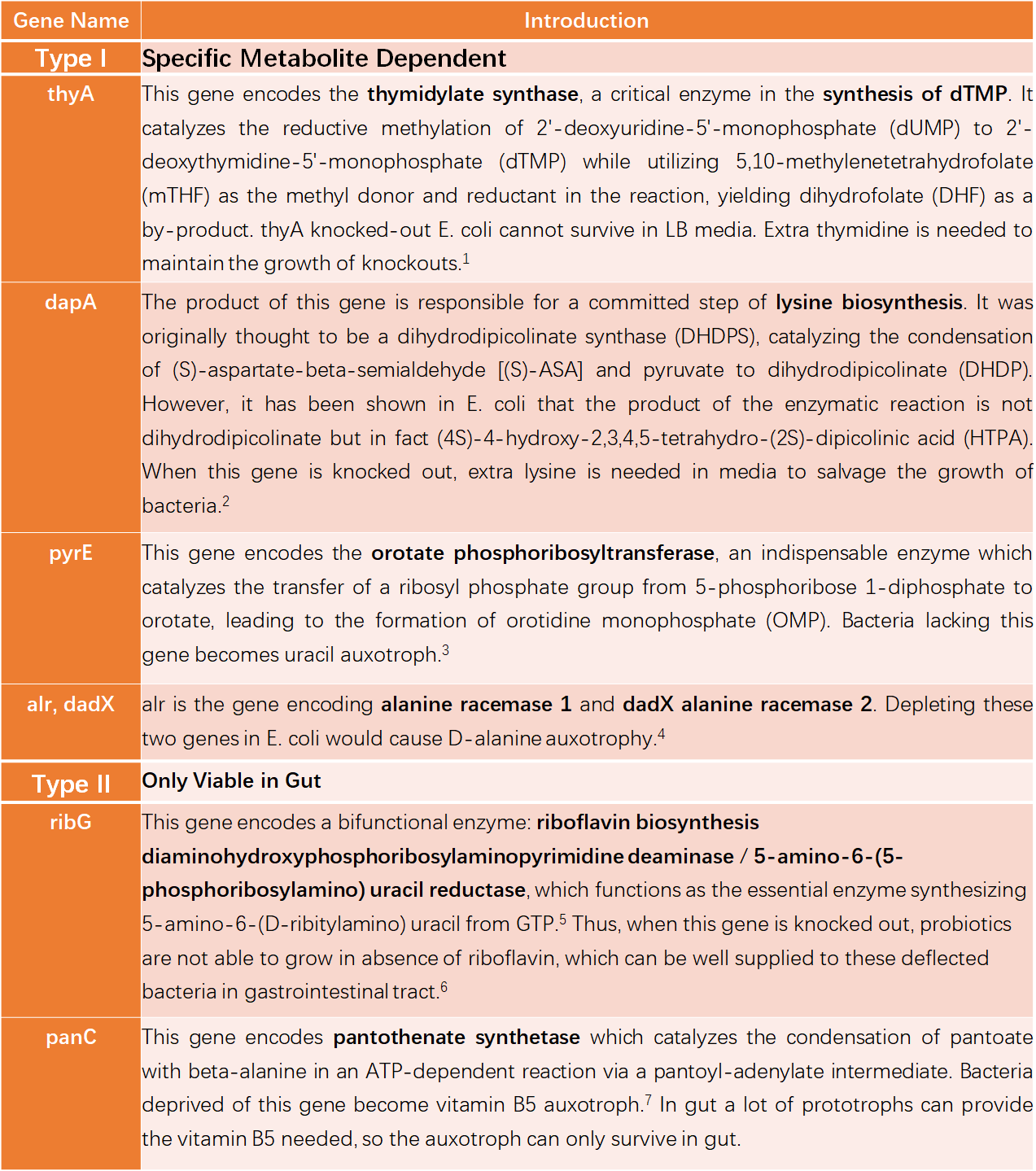 The experiments were carried out in strict accordance with animal welfare regulations and the "3R" principle (Replacement, Reduction and Refinement) formulated by Chinese Association for Laboratory Animal Sciences. All the operations and designs have been approved by Institutional Animal Care and Use Committee (IACUC) of Tsinghua University (AP: 21-CGQ4). The mice were taken good care of by the teachers in Laboratory Animal Resources Center, Tsinghua University. The operation including weighing, fecal occult blood detecting, and intragastric administration were performed properly and brought as less disturbance as possible. When dissection, the euthanasia was applied by neck dislocation, and the corpse was also well managed properly by laboratory animal research center.

The necessity of in vivo experiment on mice

As the engineered EcN strain has been proven to successfully express the TFF therapeutic proteins, the in vivo test should be performed to further confirm its therapeutic effect. And since the animal experiment must comply with animal ethics, the safety of the engineered bacteria together with the operation or regents applied on animals should be guaranteed, which is also the precondition of the subsequent experiments testing the cure effect of the bacteria.

The experimental process of the in vivo safety test

To monitor the growth of the mice, the weight was measured every day as an index representing the mice healthy condition. Then the fecal occult blood and the length of the colon were detected on day 10 to prove that the bacterial has no significant influence on intestinal health. 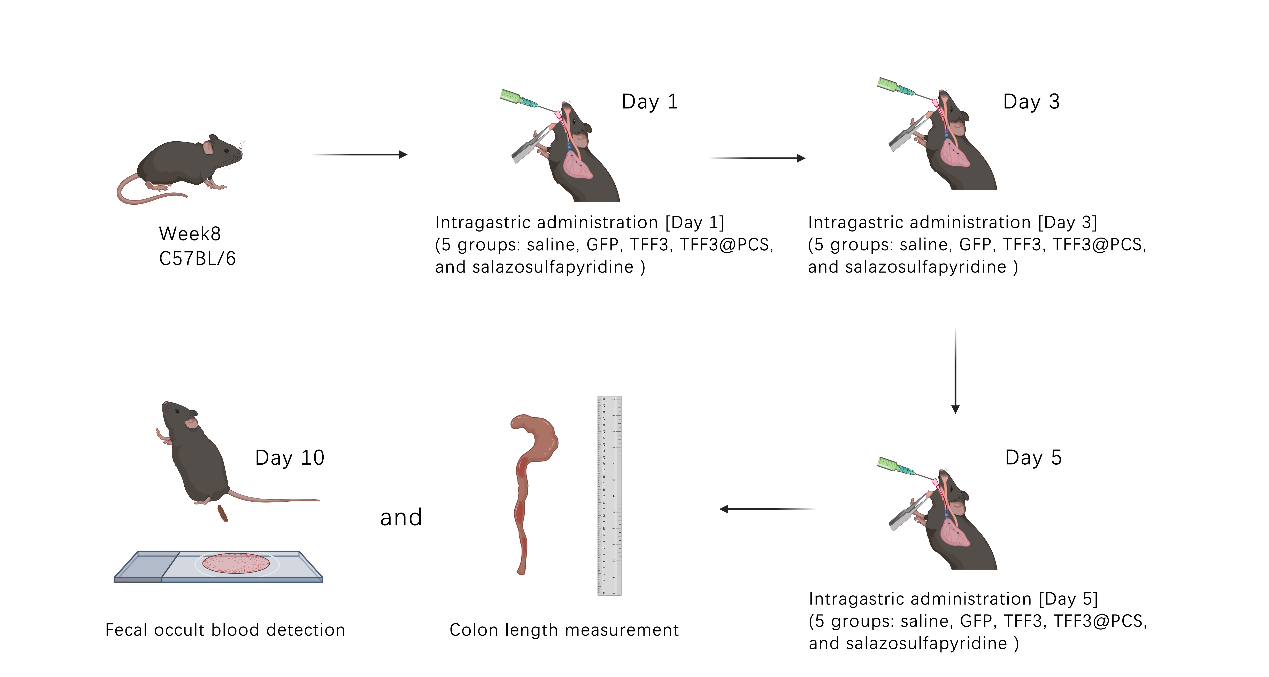 Fig.4 The process of in vivo safety test experiment

The normalized weight of the 5 mice groups of the (figure 2) shows little fluctuations during the whole period of the experiment. And there is no large variation after each time of intragastric administrations. Also The differences between experimental groups and normal saline control isare are not significant. These preliminary results indicate that the engineered bacterial and the reagents together with the intragastric administration protocol itself will not bring any harm to the mice.

As the target of the engineered bacteria delivery is colon, the health condition of the colon was further monitored by measuring the length of colon and the fecal occult blood, which are the two important indexes in the diagnosis of bowel disease. It came out that most of the mice fecal occult blood measured by FOB kit (Baso, Zhuhai, China) gave negative results and only few of them showed a weak signal ( of only a single ‘+’ (table 1)). Such positive signals are within the margin of error and may be caused by the blood contamination when anatomy.

Then the colon length of each group was measured (figure 3). We observed that the colon lengths among all the groups were similar by comparing the mean value of each group (figure 4). Also the ANOVA also shows no significant difference between each experimental group and the control group with a high P value (Table 2). Hence, the bacteria and reagents delivered into the mice will neither affect the intestinal health nor induce a bowel disease.

Fig.6 The measurement of colon length

Fig.7 The colon length of each group

By detecting multiple healthy indexes of the mice, the engineered bacterial and the protocol on mice have been proved to be harmless and will not cause a bowel disease. This meets the requirement of biosafety as well as the animal ethics, and is also the prerequisite of the following in vivo therapeutic trials.