As mentioned previously, we would like to endow EcN with the ability to controllably produce microcin MccH47, so that it can inhibit pathogenic bacteria in the intestine. This is achieved by introducing into it the microcin expression system of E.coli CA46. Hopefully, our engineered EcN will help IBD patients recover by regulating the composition of their gut microflora.

Adherent-invasive Escherichia coli (AIEC) is one of the bacteria reported to be involved in IBD pathogenesis. As its name suggests, AIEC can first adhere to intestinal epithelial cells and microphages and then invade them. This would elicit inflammatory responses in intestine.[1]

Microcins, a group of secretion peptides generated by certain E. coli strains, can bind to the ATPase on the plasma membrane of other E.coli strains - including AIEC - thereby inhibiting their growth. Microcin-producing strains themselves will not be affected due to the presence of self-immunity genes.[2]

In fact, our chassis bacteria E. coli Nissle 1917 has an endogenous microcin expression system producing MccH47, but it will only turn on and express mature microcin under certain conditions of nutrient depletion[3],such as iron starvation. On the other hand, the expression system of another strain, E. coli CA46, has been much better characterized and harnessed.

What we want to do

We planned to introduce the mature microcin expression system of E.coli CA46 into E.coli Nissle 1917 to produce functional microcin, so that it can inhibit AIEC in the intestine of IBD patients and help restore their gut microflora composition.

We based our design on microcin MccH47, since it can be endogenously produced by EcN.

E.coli CA46, another E.coli strain capable of producing mature MccH47, has 9 genes in its MccH47 expression system: mchB, which encodes the precursor; mcmK, mcmL and mchD, which are necessary for the post-transcriptional modificaiton of the precursor; mchE and mchF, which transport MccH47 from the cytosol to the outside environment; mchC and mchX, whose functions are still unclear but can regulate the expression of MccH47; mchI, which encodes an inhibitory peptide[4]that protects the producer itself.

We found that although WT EcN already possesses homologs for all 9 genes mentioned above, these genes are divided into two cassettes in its genome, with mcmK and L located in a different cassette from the other 7 genes. This led us to speculate that they may be regulated separately, and that we may not need to introduce the entire set of 9 genes to achieve controllable production. Therefore, we designed two approaches. Approach I is to simplify the expression system and see if it can work with fewer genes. Approach II is to introduce all 9 genes at once on one plasmid. This latter approach has been proven practical by Jacob D. Palmer’s work in 2018, in which E. coli Nissle 1917 successfully obtained this system and synthesized mature MccH47.

We designed two simplified systems to test whether they can make E. coli Nissle 1917 produce MccH47.

Our first system contains only mchB and mchI, merged as a polycistron that has two ribosome binding sites and a single promoter. (Fig1)The polycistron was assembled into an RGP plasmid, with Ptac-lacO as the promoter and rrnB as the terminator. For the convenience of further verifications, we made two versions of RGP-mchIB, with and without His tag.

Our second system contains mchB, I, K and L as two polycistrons, namely mchIB and mcmKL, each constructed in the same manner as in the first system.

Although this approach is to straightforwardly express all 9 genes on one plasmid, simply fusing these genes together will not work. Such a recombinant plasmid would be too big, and would also contain too many promoters, which can lay excessive burden on the chassis bacteria. So, based on the original arrangement of the 9 genes involved, we put them into four polycistrons: mcmK-mcmL, mchI-mchB-mchX, mchC-mchD, mchE-mchF. We had constructed them successfully.(Fig.2) 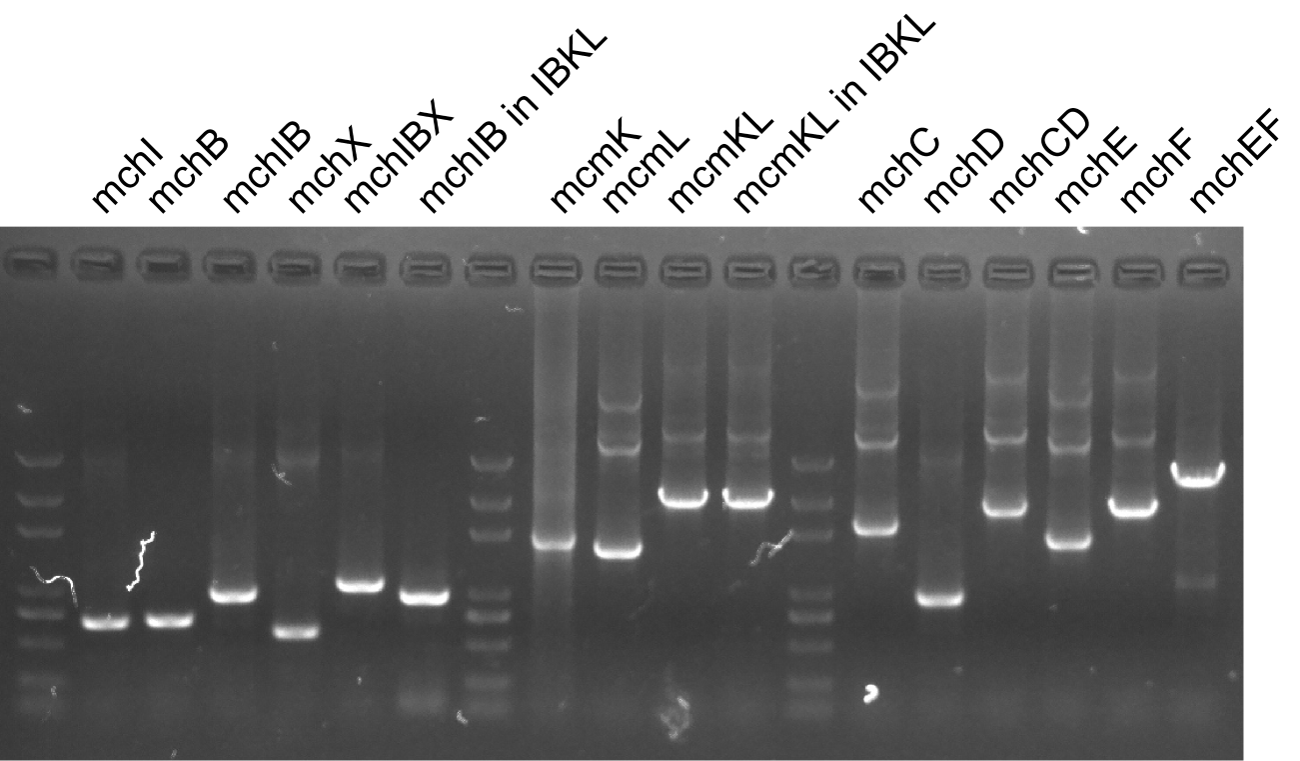 Fig.2 The identification of four polycistrons in DNA level.

For polycistrons containing the regulatory genes(mcmK-mcmL, mchC-mchD, mchE-mchF), we placed them under a constitutive expression promoter -- J23119. For mchI-mchB-mchX, we used Ptac-lacO to represent a regulatory promoter. Unfortunately, we failed to construct the final version plasmid, as the mcmKL failed to merge with other polycistrons.(Fig.3)(We added other three polycistrons at the basis of polycistron mchIBX. Therefore, we didn't identify whether the mchIBX existed in the huge plasmid via PCR.) 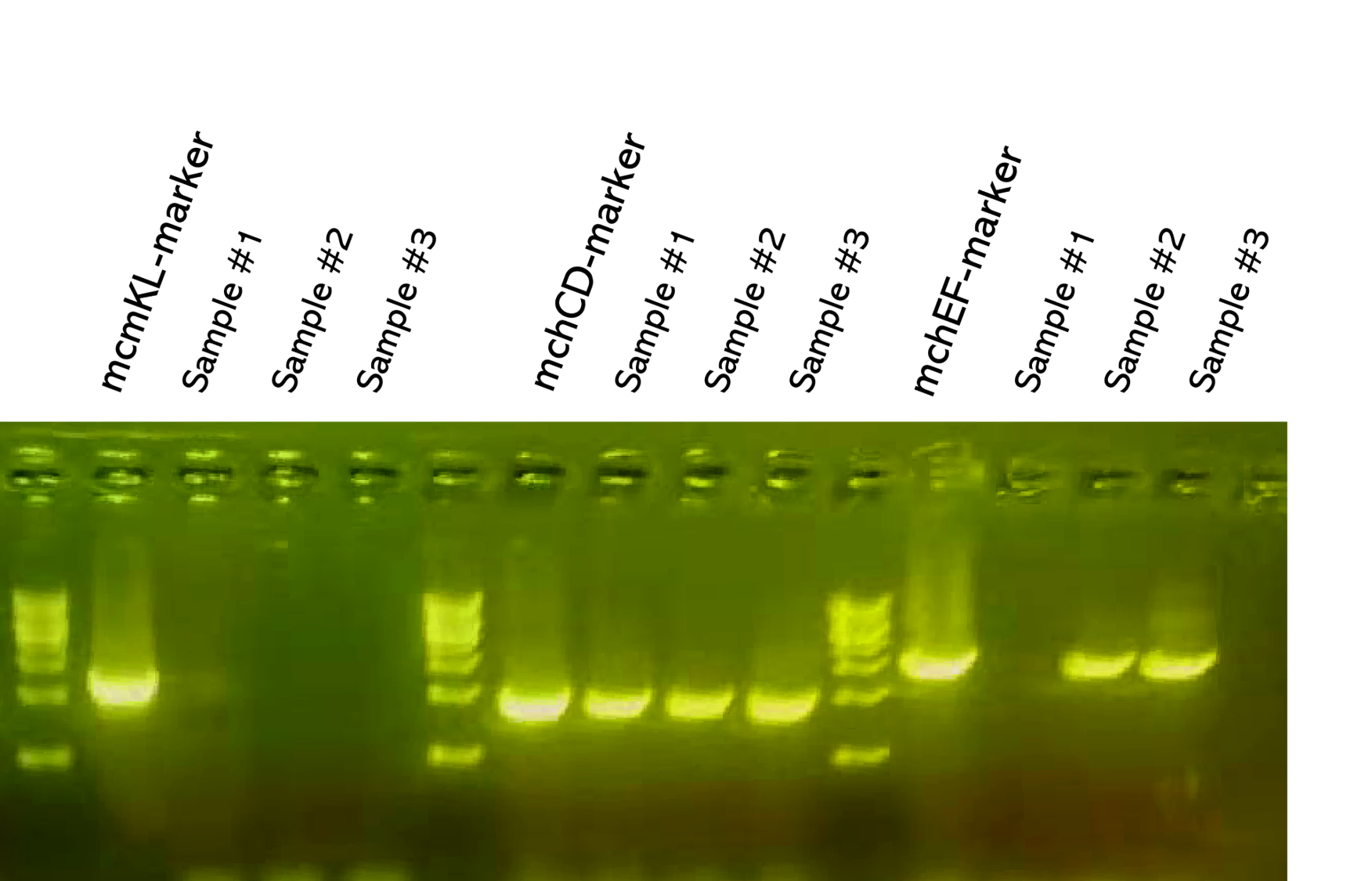 Fig. 3 The identification of four polycistrons in DNA level.

We did western blotting(WB) to test whether the polycistron can express the proteins successfully.

Fig.4 showed that polycistron mchIB had expressed MchI and MchB. However, maybe because both of the them are small peptides, the bands could not be separated successfully in the WB. As for mchIB-mcmKL, mcmK and mcmL succeed. However, mchI and mchB maybe fail for some reason. 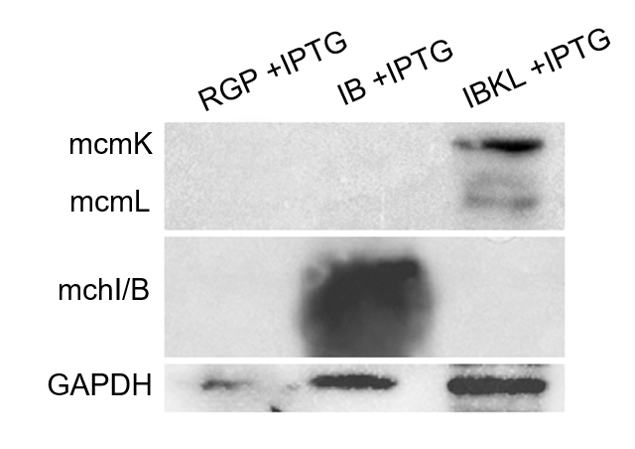 Fig.5 showed that polycistron mchCD, mcmKL, and mchIBX had expressed the corresponding proteins successfully. As for mchEF, because it was too large, we had problem in introducing it into stbl3 and thus we coundn't conduct WB of mchEF. 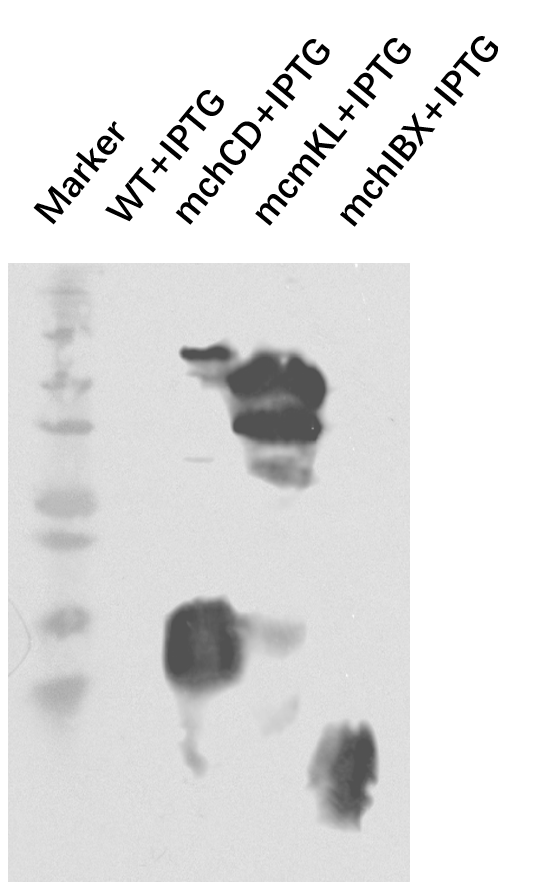 To demonstrate the competitive and antimicrobial ability of the microcin-producing strain， we co-cultured our engineered strain and a susceptible E.coli DH5α strain (imitating pathogen strain AIEC) that expresses EGFP, and then tested the green fluorescence with FACS to show whether co-culturing with our microcin-expressing strain had inhibited the growth of the susceptible strain. 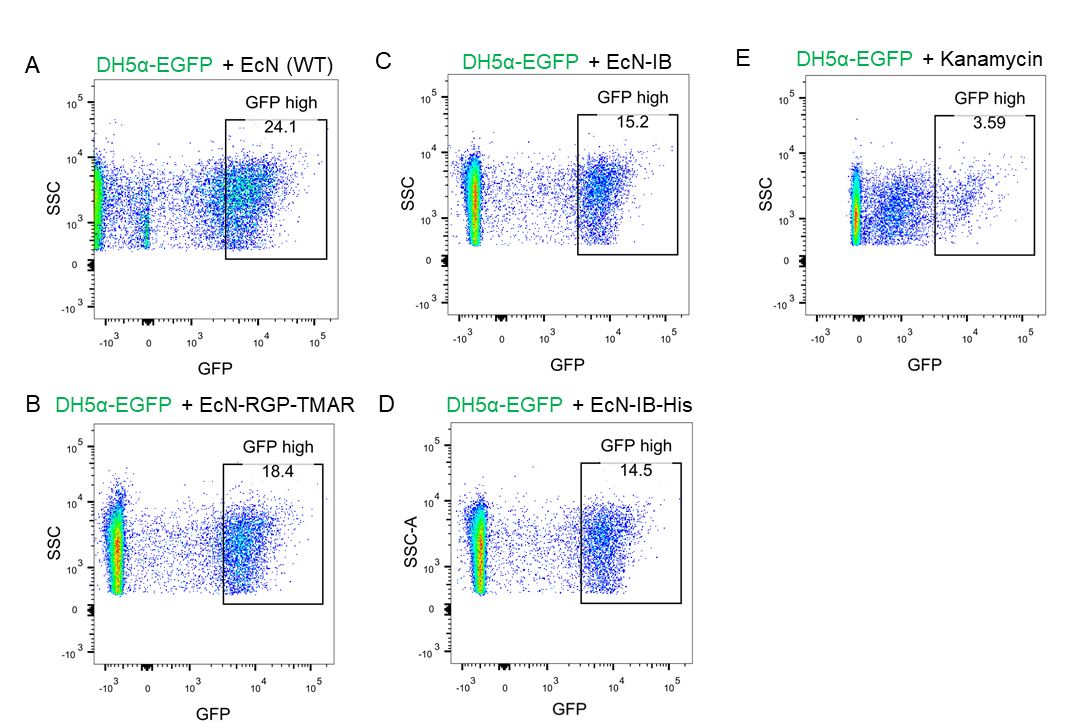 Result indicates that EcN expressing MchB and MchI has succesfully presented antimicrobial activity against DH5α, whether the protein contains a His-tag or not. If more repeated experiments support our results, we can draw the conclusion that mchB and mchI alone are sufficient for producing antimicrobial activity to a degree.

Next, to investigate if an optimal dosage exists when we apply our microcin-producin strain, we test whether the antimicrobial activity depends on the initial ratio between our engineering strain and susceptible strain (Fig.7). 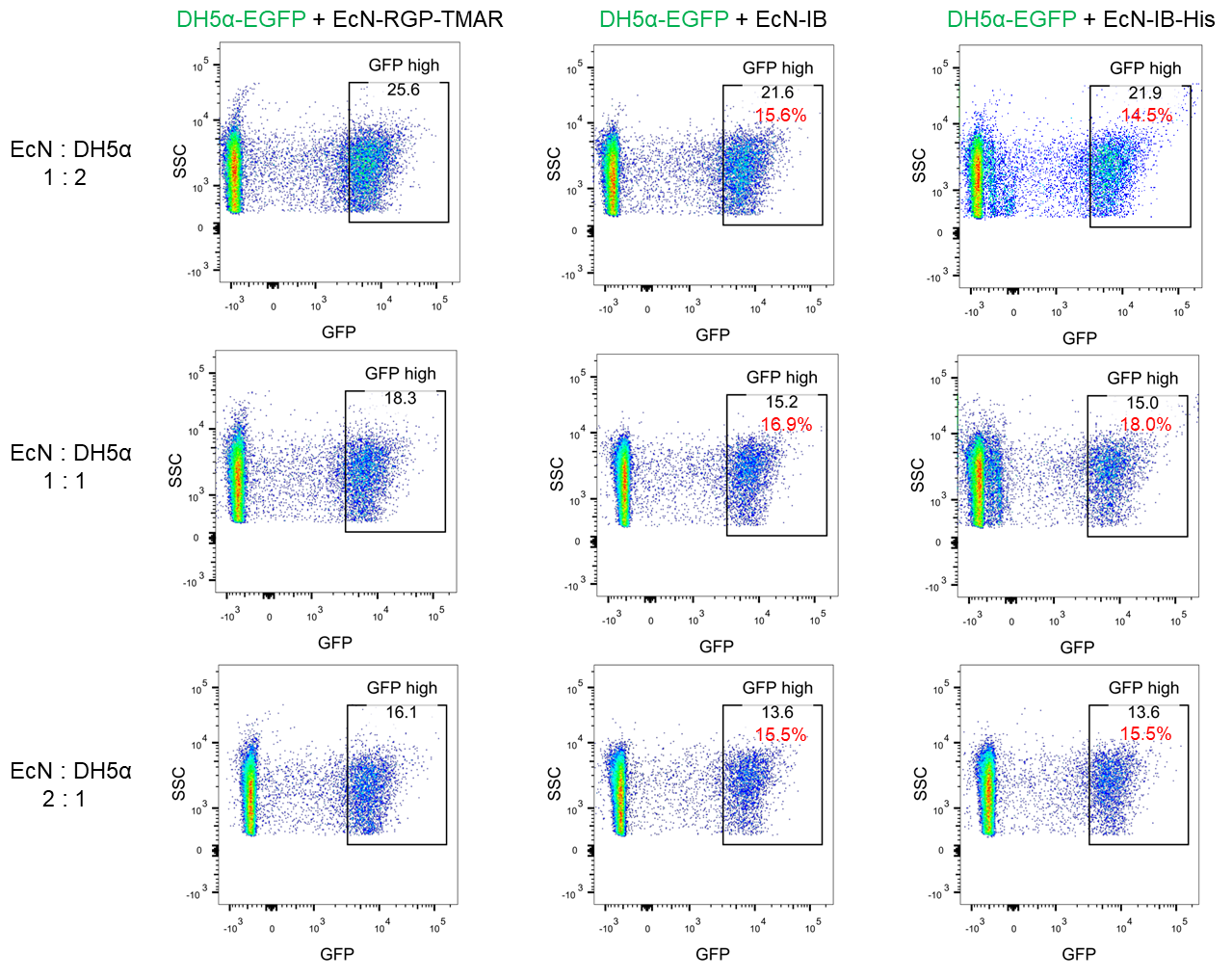 As shown in Fig.8, no obivous dependency was observed. Maybe repeated tests are required for a more stable result with staticsically significance.

Then, we considered if introducing mcmK and mcmL can enhance the antimicrobial activity of microcin (more precisely,the precursor of microcin MccH47) produced by mchB, for those two are crucial genes for the processing of MccH47. Same co-culture experiment has been accomplished to test the activity of the microcin produced by EcN strain EcN-IBKL (expressing MchB, MchI, McmK and McmL) and EcN-IBKL-His (with all exogenous protein added with His-tag) (Fig.8). 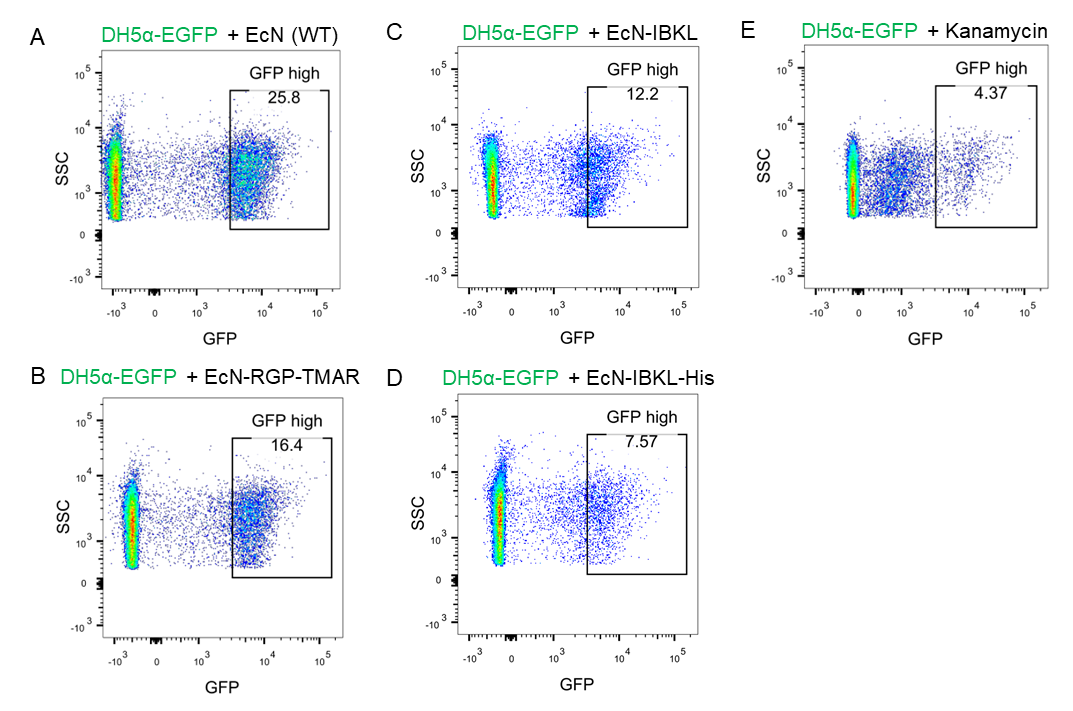 Our FACS result indicates that EcN expressing MchI, MchB, McmK and McmL (as well as proteins with His-tag) has presented relatively stronger antimicrobial activity than EcN with only mchI and mchB expressed. This suggest that expressing mcmK and mcmL should be an effective way to enhance the antimicrobial activity. However, EcN-IBKL-His seems to have higher antimicrobial activity than EcN-IBKL, which is hard to explain because the His-tag should be a potential disruptor of protein activity. This suggests potential error in our experiments and repeated tests are required for a more stable and convincing result.

The result suggests that simply overexpressing microcin precursor in EcN can already make it capable of inhibiting DH5α to an extent, which means simplification of the expression system is indeed possible. Also, introducing extra modification factors of microcin precursor is an effective way of enhancing the performance of microcin.

The above proof-of-concept experiments were done using E.coli DH5α instead of AIEC, the E.coli strains actually involved in IBD pathogenesis. However, since MccH47 has been reported to have inhibitory effects on bacteria from the family Enterobacteriaceae, to which both DH5α and AIEC belong, we believe that our engineered EcN would exhibit similar antimicrobial activity on AIEC.

Zone of inhibition test is usually a gold standard to test whether an agent exhibits antimicrobial activity and therefore a good choice for further validation of our microcin activity.

Fig. 9 Protocol for zone of inhibition test. The red X and Y are conditions wait to be confirmed in the pre-test. 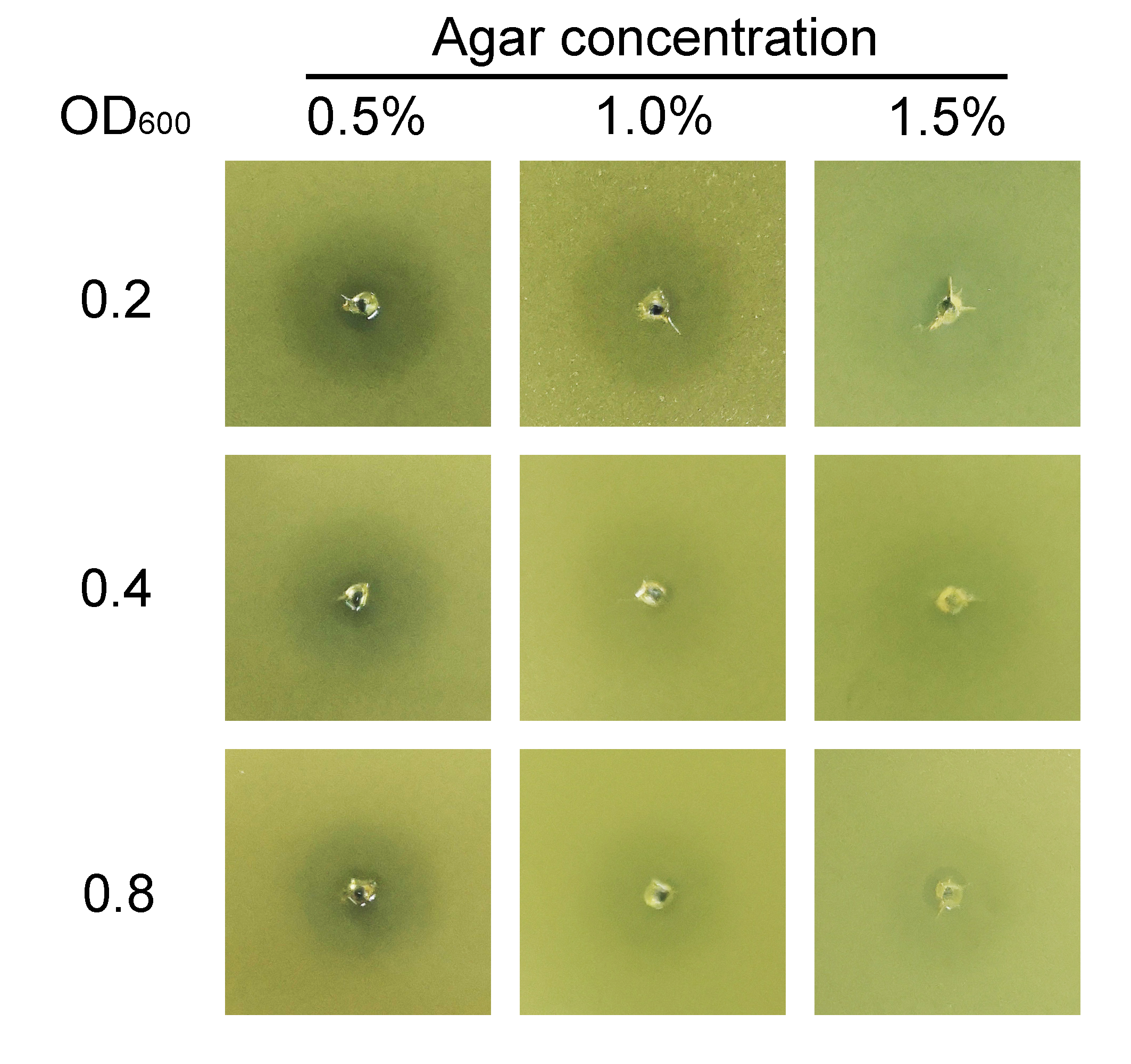 Due to the time limit, zone of inhibition test for microcin hasn't been accomplished.

We will continue to construct the plasmid in Approach II and will test if it can endow EcN with antimicrobial activity.

Zone of inhibition test will be conducted to examine the activity of microcin produced by each strain.

In addition, since we are currently using lacO as the sensing module for convenience, we will complete our design by replacing it with other sensing systems specific to IBD treatment, like sensors