It is now widely accepted that microbial metabolites in the gut are playing an important role as intermediary between our  microflora and ourselves. On one hand, the metabolic environment is shaped by both the activity of gut microbes and that of the human body. On the other, there is increasing evidence that gut metabolites are having an impact on the microflora composition as well as multiple physiological processes.

Indeed, a number of recent studies implicate that certain microbial metabolites, including bile acids, short-chain fatty acids and tryptophan metabolites, may be involved in the pathogenesis of IBD[1]. Some researchers have already been developing new means of treatment based on metabolite regulation and gained promising results[2]. However, such approaches have not yet been fully explored up till the present.

Therefore, in our multibiotic therapy, we propose to employ an engineered probiotic strain that targets gut metabolites, thus helping to bring the patient's intestinal metabolic environment back to its normal state.

We decided that our therapeutic target should meet two criteria:

Bile acids are among the metabolites whose dysregulation seems to be closely associated with IBD[2]. Normally, the liver synthesizes and secrets bile acids into the intestine as a surfactant facilitating lipid digestion. These are called primary bile acids, which are cholic acids conjugated with either taurine or glycine. Primary bile acids will then be hydrolysed by microbial enzymes called bile salt hydrolases (BSH) into free cholic acids, which will be further processed by gut microbes to produce secondary bile acids. This latter group of bile acids have been reported to inhibit pathogenic bacteria while exerting anti-inflammatory effects in the intestine, both directly and indirectly. However, IBD patients typically exhibit reduced convertion of primary to secondary bile acids in the gut. Given the effect of bile acid composition on numerous metabolic and immune pathways as well as on the microbiota itself, this dysregulation is argurably more than simply a result of IBD. Rather, it is likely that restoring the balance between primary and secondary bile acids may be a helpful approach in IBD treatment.

In addition, studies have shown that this imbalance in IBD patients is mainly caused by decreased activity of BSH, as the reaction it catalyses is in fact the rate-limiting step of bile acid metabolism[3]. It follows that the situation may be largely improved simply by expressing BSH in our engineered bacteria.

Targeting bile acid composition, therefore, has the merits of being simple in design, and having clear, predictable outcomes. 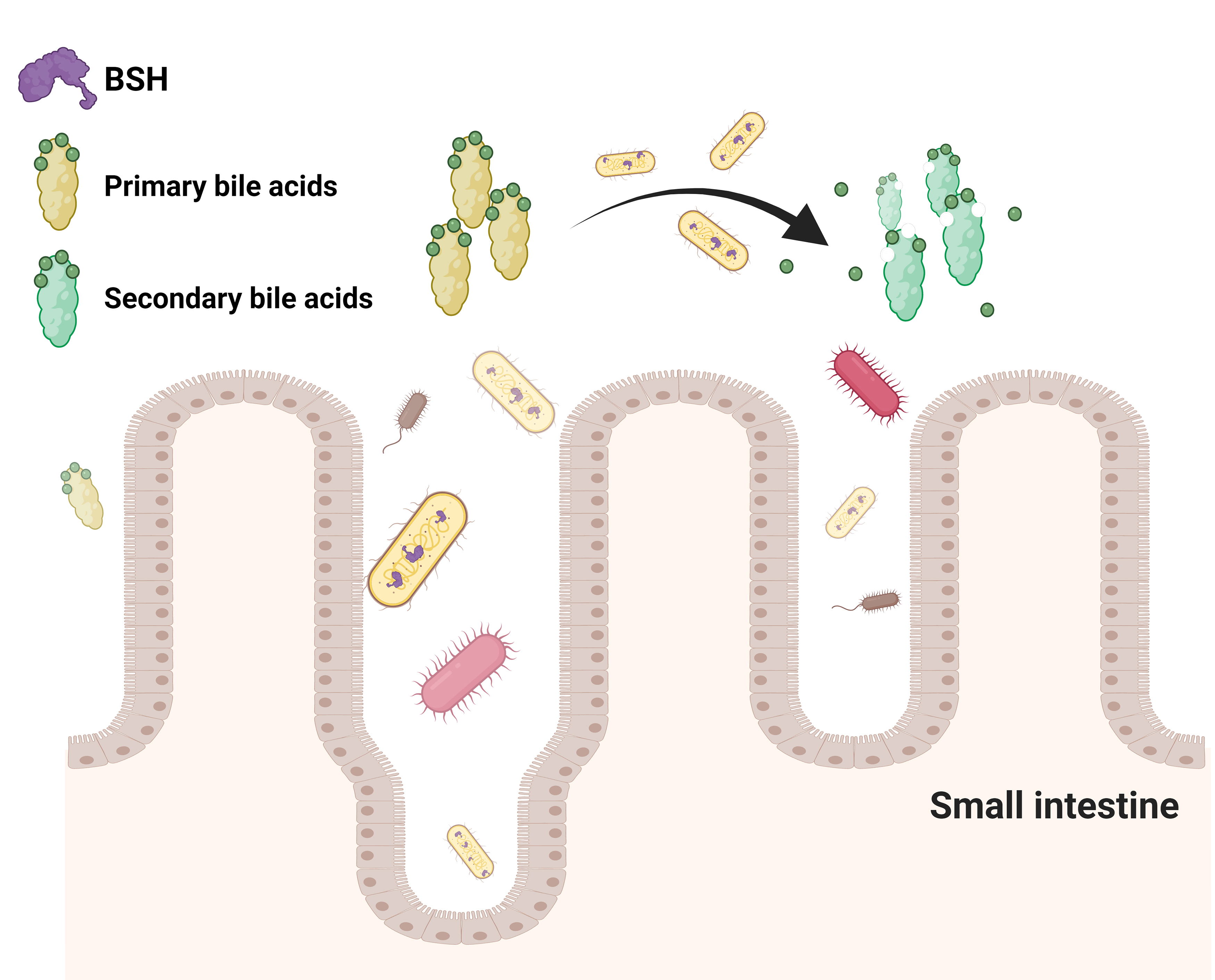 Based on these considerations, we will express the enzyme BSH in the well-characterized probiotic strain Lactococcus lactis to hydrolyse primary bile acids in the intestine, promoting the production of the more benefitial secondary bile acids[4]. Check out more details on our design page.

Aim: to regulate the bile acid composition in the intestine by expressing bile salt hydrolase (BSH) in an engineered probiotic strain.

Since this strain is to operate in the small intestine, we chose the well-characterized and widely used Lactococcus lactis MG1363 as our chassis microbe[5].

In fact, a lot of microbes are capable of producing enzymes that catalyse the hydrolysis of primary bile acids. We learned from existing literature that among these enzymes, BSH1 and BSH2 from Lactobacillus salivarius have been successfully expressed in L.lactis and was shown to function well[6]. There are also ample data on their properties and activity assays. Therefore, these two enzymes are the finalists for our design.

Since our engineered probiotics are to be used in IBD treatment as prescribed drugs instead of dietary supplements, we deem it unnecessary to incorporate conditional promoters into our design. We therefore used the constitutive expression plasmid pMG36e as the backbone. Also, pMG36e is a transfer plasmid that can replicate in both E.coli and L.lactis, which saved us a lot of trouble in transformation.

We have conducted the follow experiments to implement our design:

Cloning BSH1/2 onto pMG36e backbone;
Amplification of recombinant plasmid in E.coli;
Transformation into L.lactis by electroporation;
Assessment of BSH activity;
Check out the results page for experiment data and specific details.

Metabolic regulation is a long-term process. Therefore, it would be desirable if our engineered strain can stably stay in the gut over a period of time. Inspired by a recent paper on Nature Communication, we decided to express the Listeria adhesion protein (LAP) from the non-pathogenic Listeria innocua in our engineered strain[7].

LAP interacts with Hsp60 on the apical surface of intestinal epithelial cells. It has been shown that probiotics expressing LAP exhibit increased adhesion on epithelial cells. We hope, therefore, that this protein can help our engineered L.lactis colonize the intestine.

We are introducing LAP into our L.lactis in a similar way as BSH, by expressing it on a second copy of pMG36e. Check out the results page for experiment data and specific details.

To help us understand the behaviour of engineered L.lactis in the intestine, we made a mathematical simulation, taking both engineered and original L.lactis in the gut into consideration. Check out the modelling page for specific details.

As a therapeutic probiotic, our engineered L.lactis should be able to retain its plasmids without antibiotic selection pressure. This can be achieved by replacing the resistance gene on the plasmid with a copy of an essential gene, and transforming it into an otherwise auxotrophic strain lacking this essential gene. We found from existing literature that thyA- L.lactis, whose thymidine synthesis pathway is impaired, would not be able to survive in the gut or in other environments without extra thymine or thymidine supply. Furthermore, it is unlikely for such strains to obtain thyA via horizontal transfer in the gut.

Therefore, we will construt a thyA- L.lactis strain, replace the Emr gene on pMG36e with thyA, and transform the recombinant plasmid into the thyA- strain.

Due to the time limit, however, this design is not implemented in our wet lab experiments.

We plan to conduct the following experiments to implement our design:

Construction of thyA- L.lactis via double homologous crossover;
Replacement of resistance gene;
Transformation by electroporation;
Assessment of containment efficacy;
Check out the results page for details in experiment design and expected results.

Sequences of BSH1, BSH2 and LAP were obtained from NCBI GenBank at accession number FJ591086.1, FJ591087.1 and WP_003762516.1. Fragments were synthesized by Tsingke Biotechnology Co., Ltd., and were assembled onto pMG36e with the NEBuilder Hifi DNA Assembly kit.

As is described in related literature, recombinant plasmids are to be first amplified in E.coli and then extracted for further transformation.

However, here we met a problem: the selection marker of pMG36e is erythromycin resistant gene Emr, but erythromycin is not commonly used in E.coli positive colony screening, and we found several commercial E.coli strains to be inherently resistant to erythromycin. After several attempts, we finally worked out that pMG36e-derived plasmids can be effectively amplified with Stellar competent cells from Takara Bio., in LB culture medium with 250-350 ug/ml erythromycin. We hope these results may be helpful for future teams wishing to use this plasmid.

SRecombinant plasmids were extracted from E.coli using Tiangen Maxi Plasmid Kit, then transformed into L.lactis MG1363 via electroporation. During this stage, we exchanged much information and experience with Team SZU, who happened to be also working with MG1363. Check out the collaboration page for more details.

After overnight shaking culture, cells were harvested and lysed for westen blot. The result is shown below: 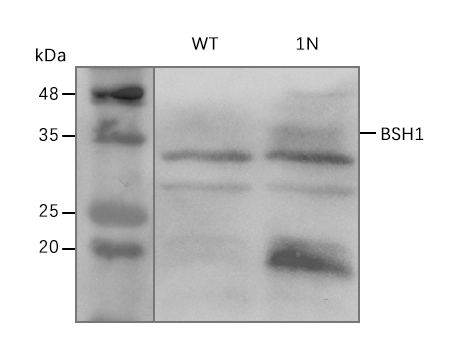 The right lane, which was from the cell extract of L.lactis with pMG36e-BSH-1N, shows two bands at ~35kb and ~20kb that are not present in L.lactis without plasmid (left lane). We speculated that the 35kb band, in line with the molecular weight of BSH1, represents correctly expressed BSH1; the smaller 20kb band might be a truncated expression product, visible because it possesses 6xHis-tag at the N-terminal. However, due to the time limit, we did not further verify these speculations, and such results are admittedly not very convincing.