Chitosan can be deposited with polydopamine on the cell surface by chemical self-assembly, which is a convenient, effective and novel way to protect engineered bacteria against harsh physical environment.

In this case, we can use this surface-decoration approach to realize the delivery of engineered bacteria.

Why we need a delivery system

Fig.2 Take stomach for example. Many engineered EcN can not go through the digestive tract environment sucessfully.

Therefore, we need an efficient, convenient, and powerful delivery strategy to endow our engineered bacteria with an ability to go through the digestive tract environment sucessfully.

What we want do

We planned to introduce the mature microcin expression system of E.coli CA46 into E.coli Nissle 1917 to produce functional microcin, so that it can inhibit AIEC in the intestine of IBD patients and help restore their gut microflora composition.

We were troubled at the beginning because we didn't know what delivery strategy we should choose. There are many conventional strategies by now, such as capsules, tablets, and solutions.[1]However, we prefer a novel, convenient and powerful strategy.

Fortunately, we participated in the China Gut Festival in 2021 and were greatly inspired！Jinyao Liu(Researcher, Shanghai Jiaotong University, Institute of Molecular Medicine, State Key Laboratory of Oncogenes and Related Genes) just introduced us to such a desired delivery strategy. We contacted him later and decided to introduce this strategy called surface decoration to iGEM. In this way, the engineered bacteria can obtain a protective "membrane" and go through the digestive tract environment sucessfully.(Fig.3)

Fig.3 Take stomach for example. Many engineered EcN with a "membrane" can go through the digestive tract environment sucessfully.

Surface decoration is a genral strategy to decorate living cells with multifunctional coatings. We chose PCS (Chitosan co-deposited polydopamine) in our project because it worked well in EcN[2]. We also tested if the strategy worked in vitro and in vivo.

Surface decoration of living cells by exogenous substances offers a tool for tuning cell behaviors, which plays a critical role in cell-based therapy.[2]It is an easy and conveninent approach for decorating living cells with multifunctional coatings. By co-depositing with dopamine, various functional small molecules and polymers can be deposited on the surface of living cells, thus making surface decoration.(Fig.4)

One important application of surface decoration by co-depositing is delivery of engineered bacteria, which can significantly increase the survival and activity of engineered bacteria through digestive tract environment. One article reported that decorated cells showed more than 30-times higher bioavailability in the gut.[2]

Fig.4 Functional small molecules and polymers can be deposited on the surface of living cells together with dopamine.

Compared with WT EcN, PCS treated EcN(EcN@PCS) can increase the survival ability of EcN in digestive tract environment while having little effect on its proliferation. Moreover, chitosan has the ability of targeting colon[2,3] and it has very beneficial properties, such as good biocompatibility, fair biodegradability and low toxicity[4]. So we can also increase the colonization ability of EcN by chitosan deposition. This is why we chose PCS as our delivery strategy.

We plan to divide the proof of concept into two parts: in vitro test and in vivo test.

We first prepare the EcN@PCS as described in the paper[2].After preparing, the EcN solution became dark(Fig.6) because dopamine could undergo auto-oxidation in the air under alkaline conditions (pH>7.5) to form polydopamine, which deposited onto the EcN surface. The color of the solution would change from colorless to brownish yellow, and finally to dark brown or even black. 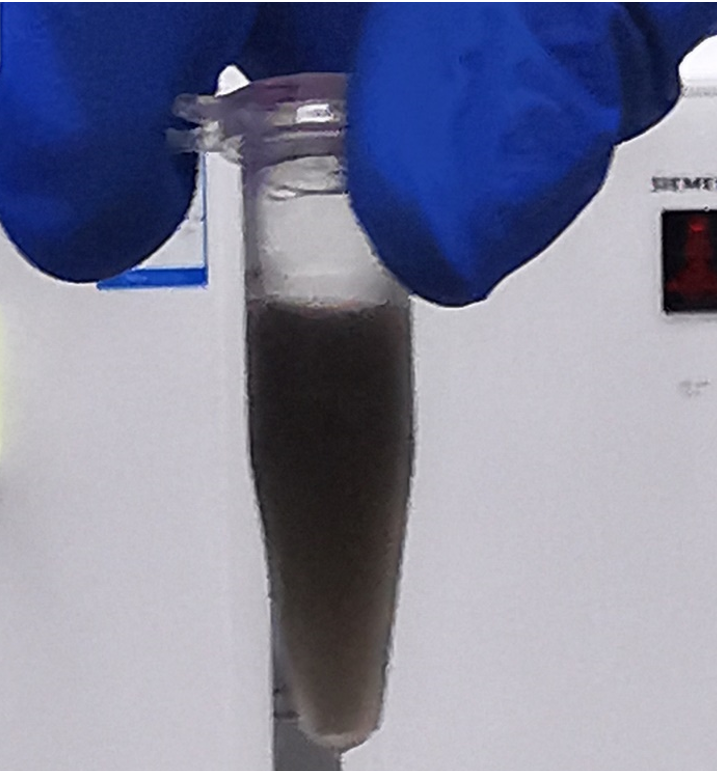 Fig.6 The black solution of EcN@PCS

We next tested if the chitosan truly co-deposited onto the EcN surface. Therefore, we changed chitosan into Rhodamine-chitosan and imported pEGFP plasmid into E.coli. We found that the red fluorescence and green fluorescence could be co-localized, which suggested that the chitosan could truly deposit onto the cell surface.(Fig.7)And we could find that the bacteria gathered together. 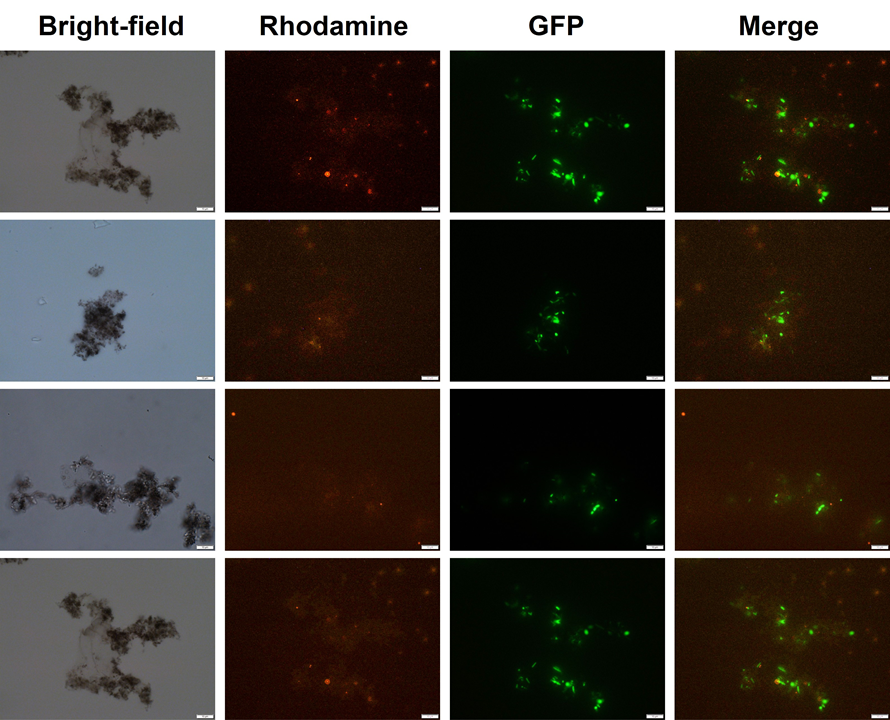 To test the protection function of the PCS, we conducted digestion experiment in vitro. We digested WT EcN and EcN@PCS of the same amount in simulated gastric fluid (SGF) supplemented with pepsin (pH 2), and simulated intestinal fluid (SIF）containing trypsin (pH 6.8) at 37 °C for 1h, 2h, and 3h respectively and calculated the CFUs.

We found that in SIF, the protection function of PCS was excellent(Fig 8). The number of EcN@PCS was significantly higher than WT EcN. Moreover, we found that the EcN could grow in the SIF because the amount of colonies increased with time. However, as the SGF had too strong lethality and maybe we didn't prepare the bacteria perfectly or we digested too long, neither WT EcN nor EcN@PCS growed on the LB plate. 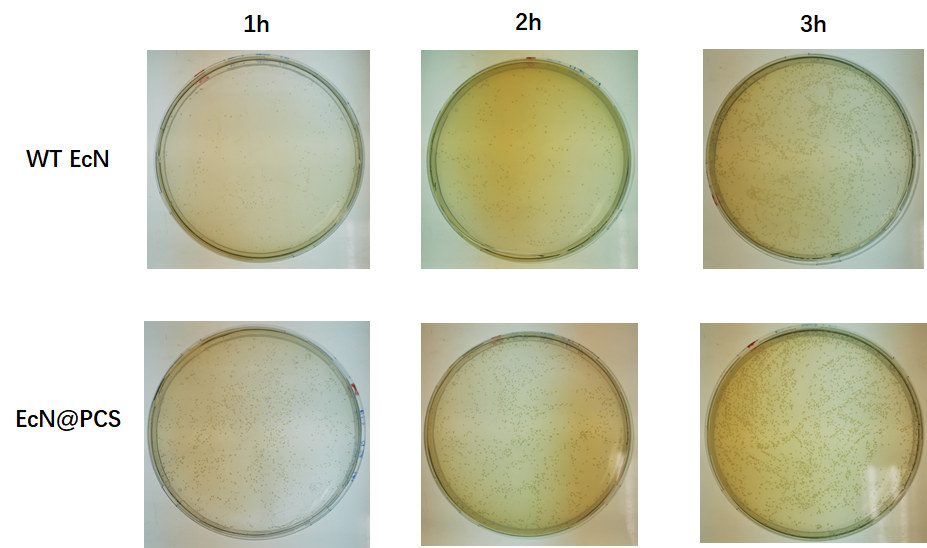 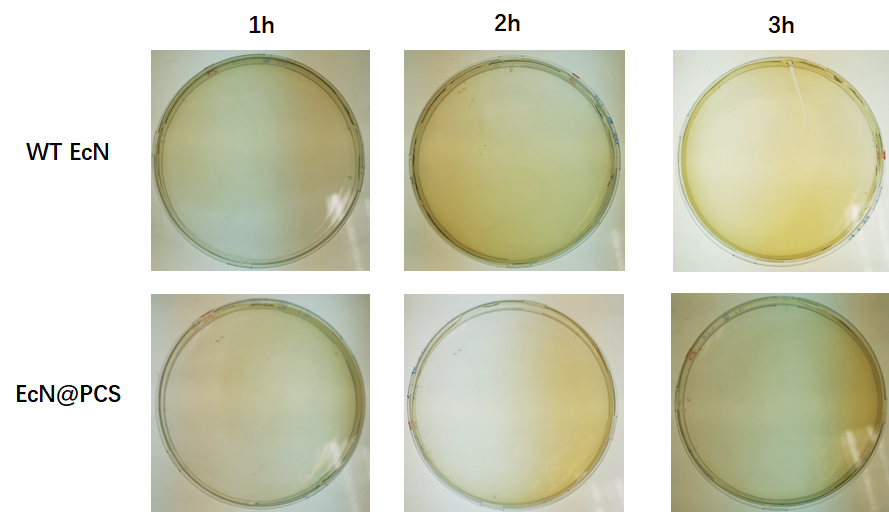 Encouraged by the success of the in vitro experiment, we wanted to test whether this strategy can work in vivo. We did intragastric administration of C57BL/6 mice in day 0 and day 1, with equal amount of saline, RGP-TFF3 EcN, and RGP-TFF3 EcN@PCS respectly. Meanwhile, we also collected the fecal of each mouce in day 1 and day 2. After collecting the fecal, we voltexed and homogenized the fecal with low speed centrifugation to remove the impurity. RGP is a plasmid vector for our protein expression, which has the ampicillin-resistant feature, so we apply 10% of the supernatant to the Amp+ LB plate to investigate how many of our RGP-TFF3 EcN lived in the gut. The workflow is shown in Fig.10. 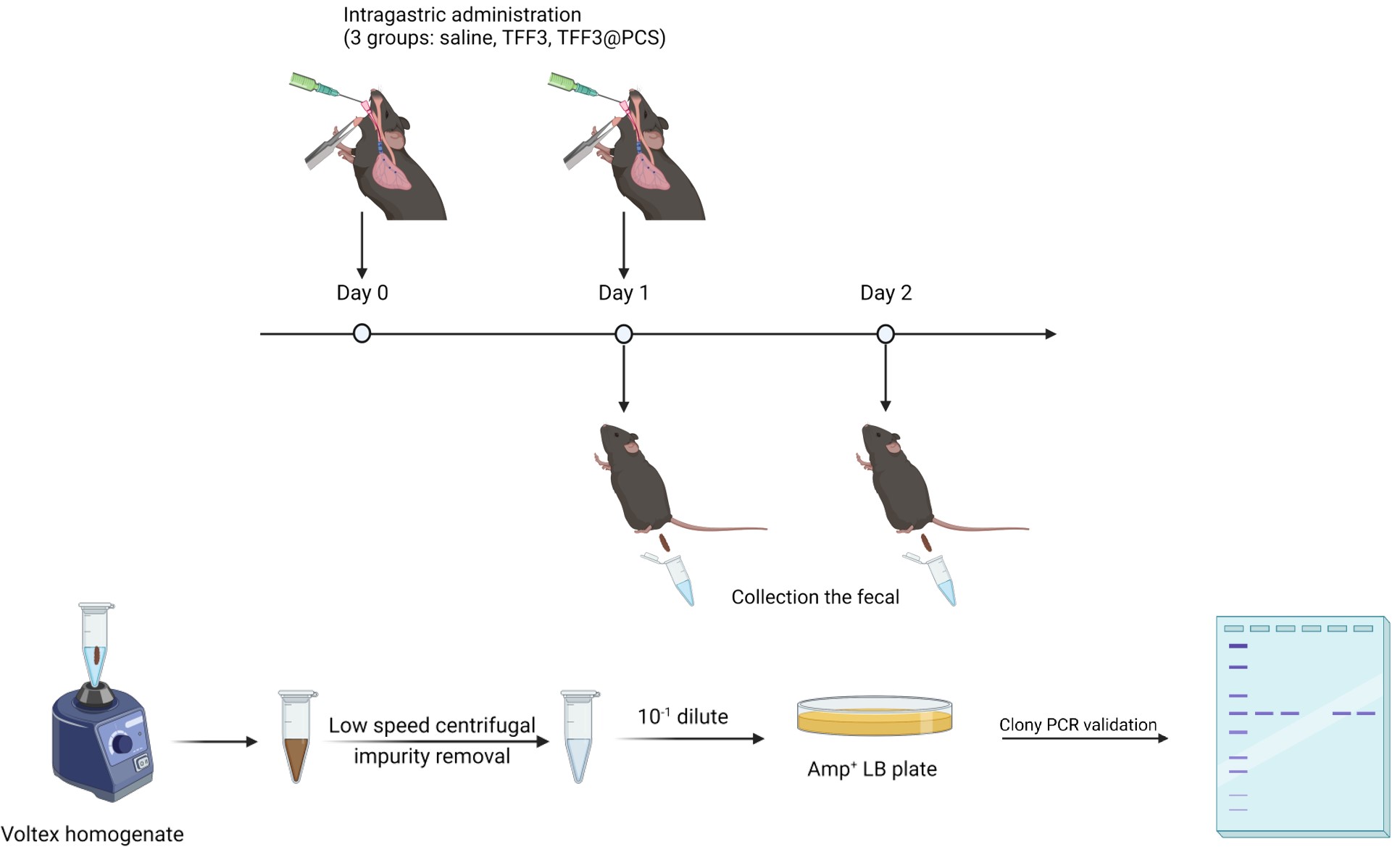 Fig.10 Workflow of the in vivo validation for delivery system. 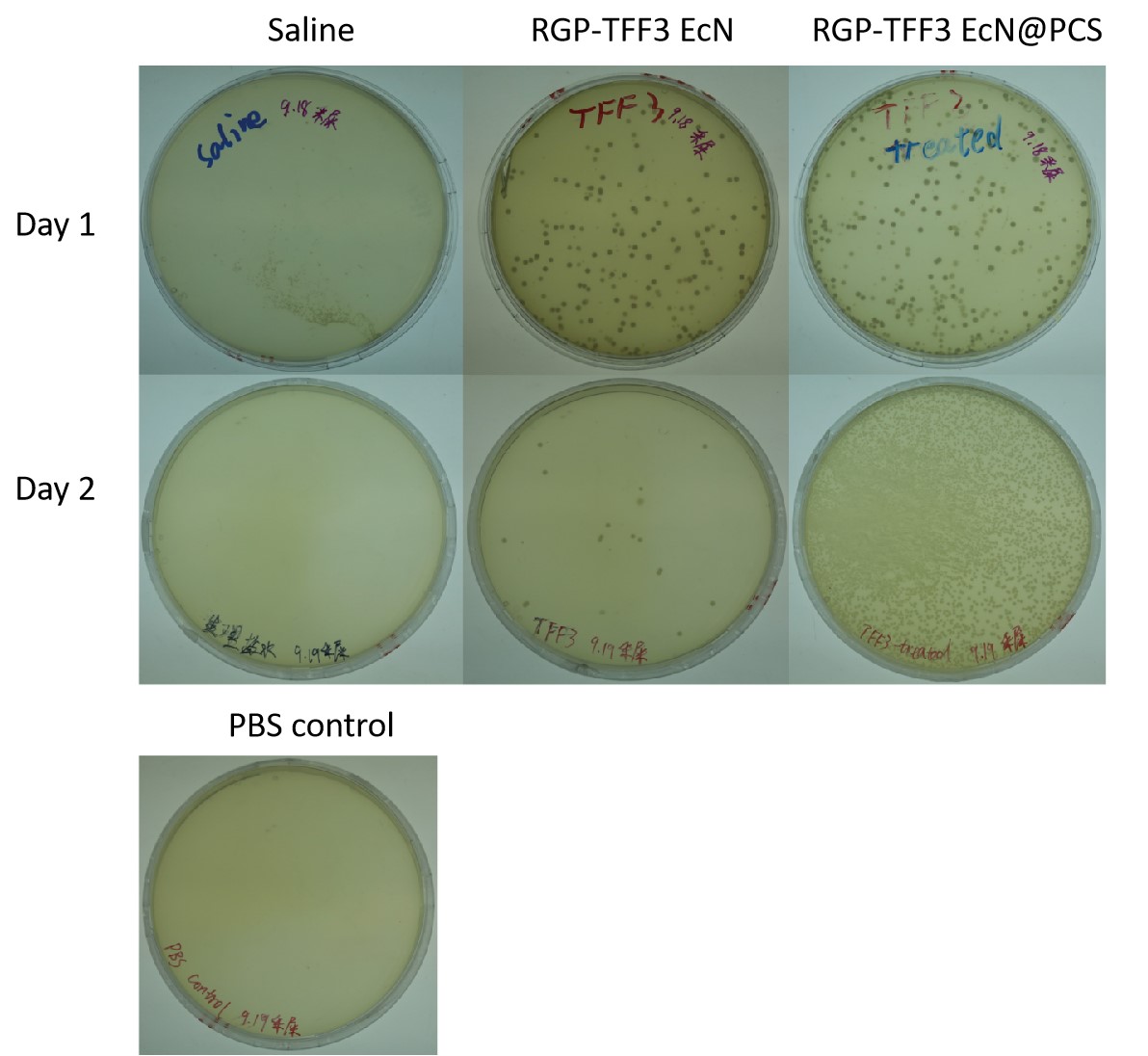 Although the animal-barrier mouce is extremely clean, we still worred that the monoclone that grows in the Amp+ LB plate is not our RGP-TFF3 EcN. So we immediately added a PCR validation test (see Fig.12). It is obviously that the clony in day 1 is not our RGP-TFF3 EcN at all, and the clony in day 2 is true. This PCR validation experiment provides a more solid evidence for our conclusion. 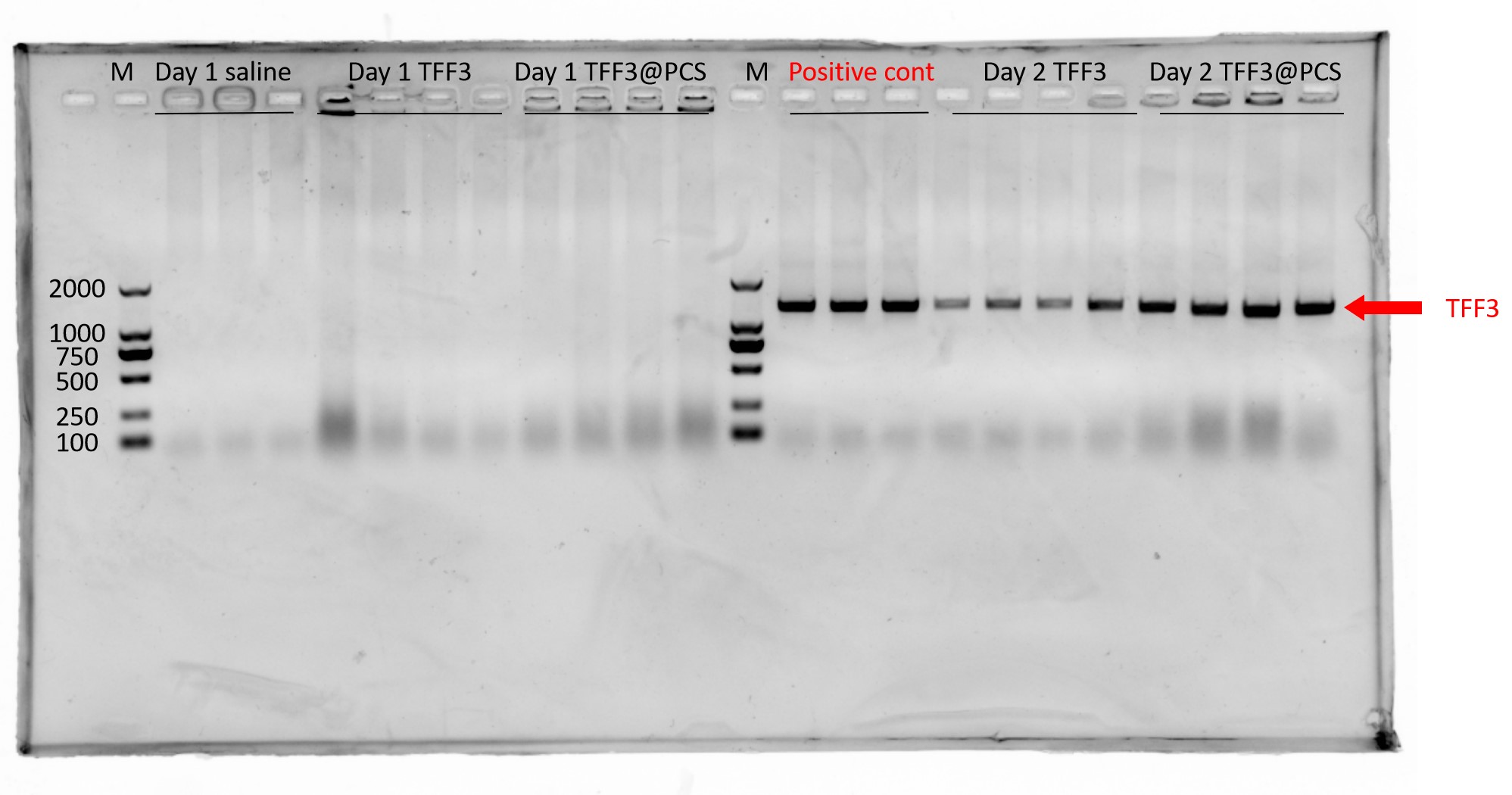 Fig. 12 Clony PCR validation for some clonies in day 1 and day 2 Amp+ LB plate. We use RGP-TFF3 plasmid as the positive control.

In short, we adopted a surface decoration strategy-PCS (Chitosan co-deposited polydopamine) to protect our engineered EcN from digestive tract environment. This is a novel, convenient, low-cost, chemical self-assembly, and powerful strategy which is a gift from China Gut Festival in 2021. We believe this strategy will be very promising in future research.