Most cancer cells exhibit elevated glycolysis, resulting in high secretion of lactate. These secreted lactate anions are known to remove the positive ions, leaving behind the negative changes on the cell surface [1]. Isoelectric point also known as pI is the pH where a peptide exhibits no charge. In any pH above this value, the peptide exhibits a positive charge while the opposite is true in a lower pH.

Increasing the specificity of the CPPs against cancer cells is favorable for the peptide to exhibit a positive charge. For this purpose, the isoelectric point of the peptide must be significantly higher than the extracellular pH. As it is known that the general pHe of tumor cells is around 6.4 to 7.0 [2], a peptide with a pH value significantly higher than this was favorable.

Benchling is a tool widely used to compute the chemical properties of biological molecules. Work with benchling on Buforin IIB and modified peptides to verify that they exhibited a higher pH value than the extracellular pH.

Results showed that all three peptides to be tested in the wet lab exhibited significantly higher pI values than the pHe of cancer cells. Thus, these peptides would display a positive charge and be specifically attracted to the negatively charged cancer cell.

In the process of wet lab, primers with the following two DNA sequences were used for PCR testing: CAC CCT CAT CAG TAA TGG TCA and AAC GTG CTT ATC AGG ACC TCA. Our objective for this is to confirm that the primers used in the wet lab are designed correctly as 186bp long sequence. Ensembl is a genome browser that provides resources for research in vertebrate genomes. 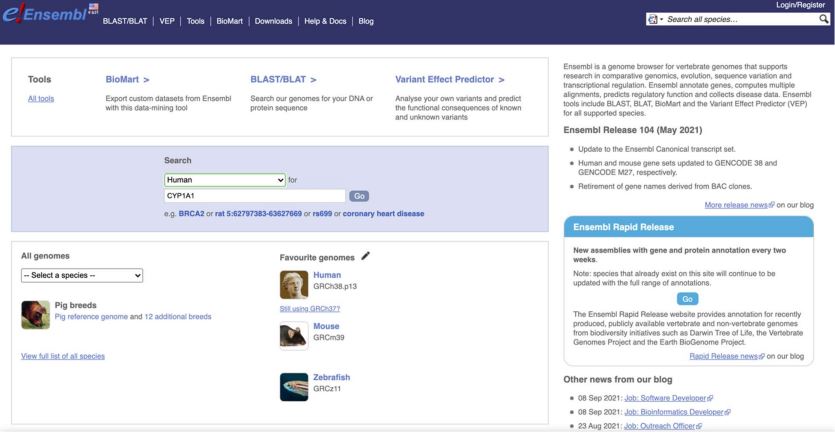 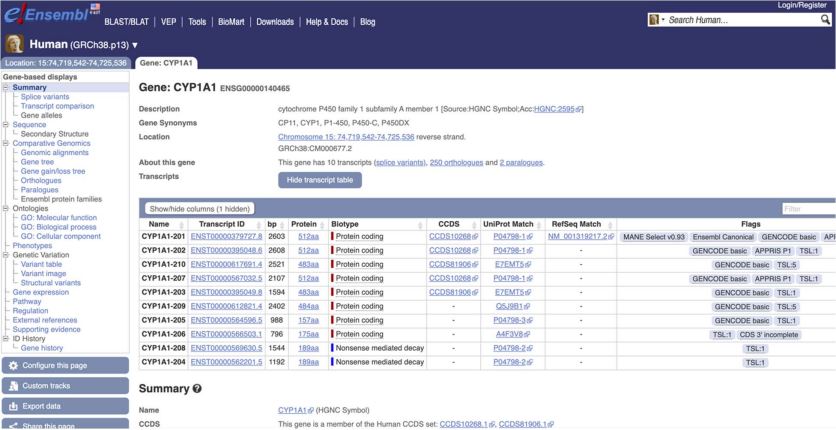 As primer sequences are known to exist in the coding sequences(CDS) of proteins, we downloaded just the CDS file for CYP1A1-201 transcript and added it to Benchling. 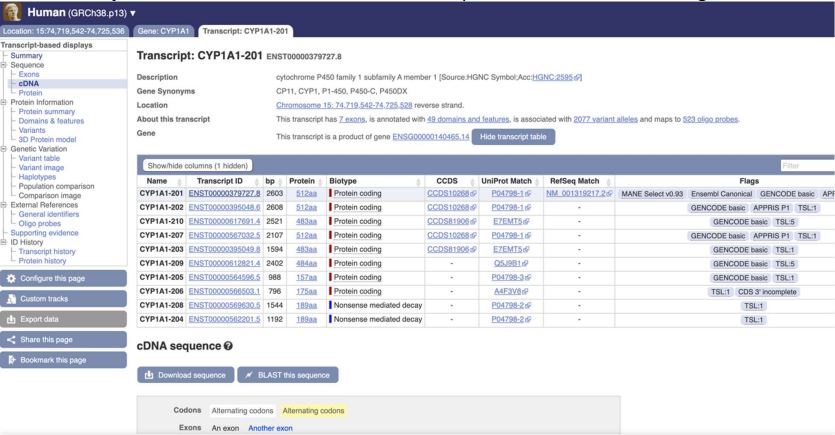 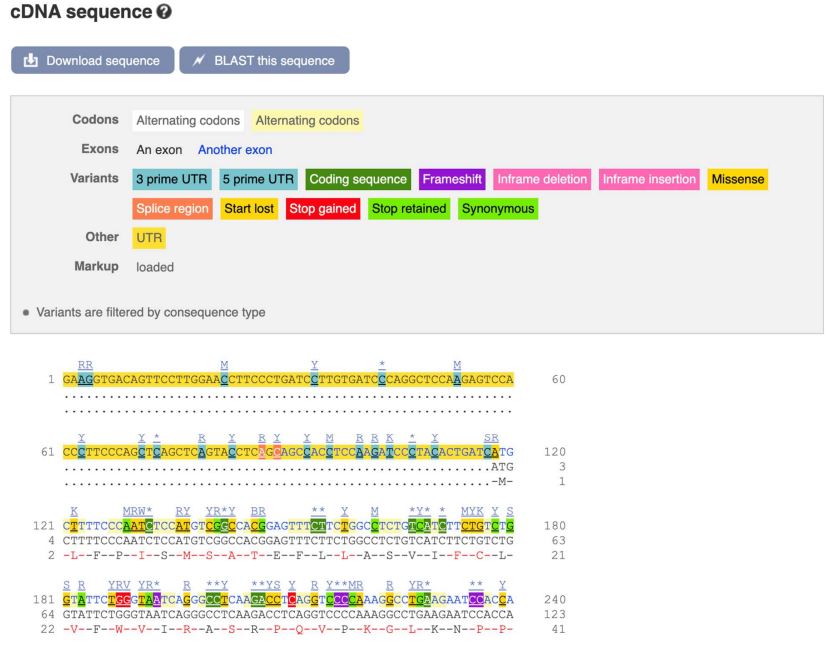 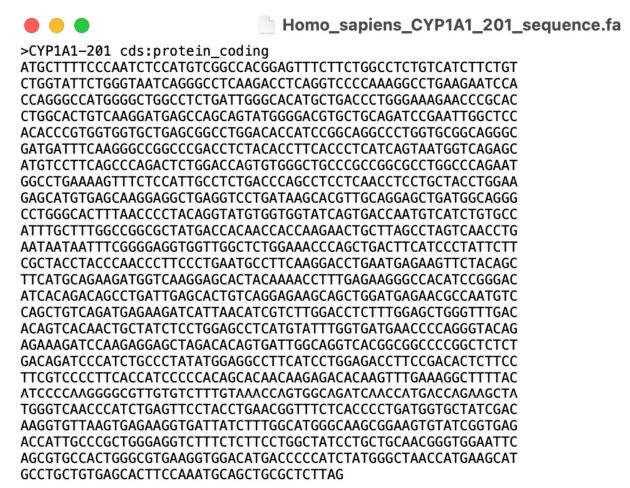 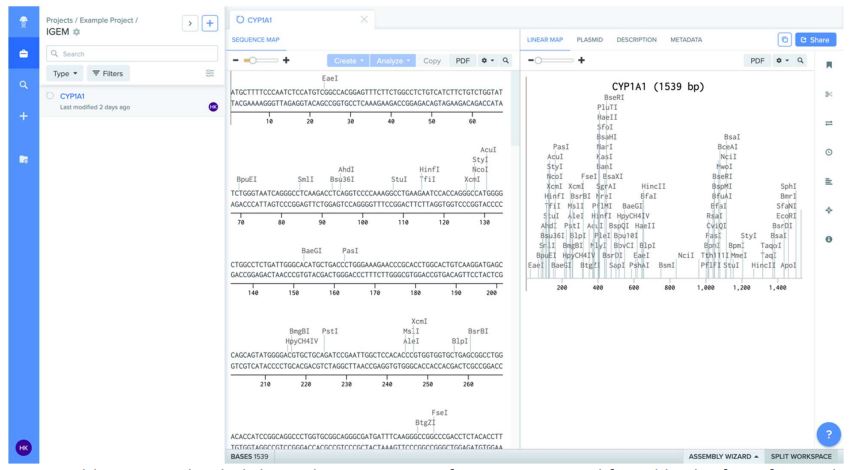 On Benchling, we uploaded the coding sequence of CYP1A1-201 and found both of our forward primer and reverse primer sequences in it. Once the primers were added to their corresponding locations, we could count the number of base pairs between two primers which we confirmed as 186bp. 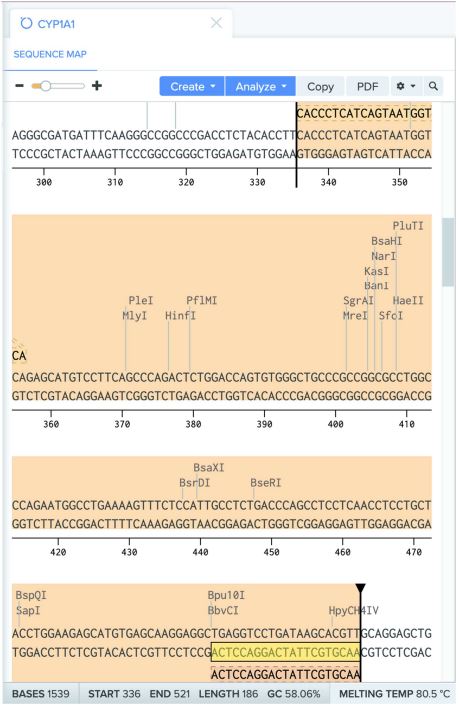 PEPFOLD 3 is a novel computational framework that allows for de novo free or biased prediction for linear peptides between 5 and 50 amino acids. It requires the amino acid sequence to run the program and generate a peptide structure prediction. Accompanying the prediction of the structure are different modes of viewing the protein as well as a local structure profile - a graphical representation of the probabilities of each Structural Alphabet (SA) letter at each position of the sequence. The structure profile can be interpreted using the following color key: red- helical, green - extended, and blue - coil. 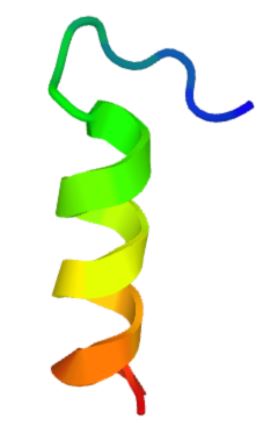 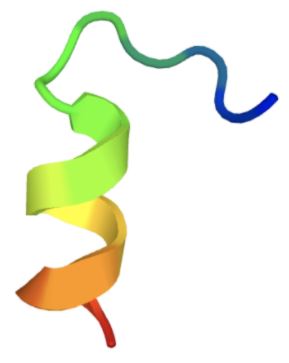 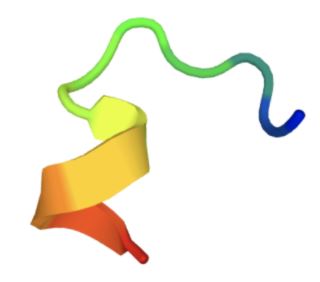 The sizes of the models are in accordance with our stepwise elimination of C-terminal (RLLR) from the original BIIB 22-amino-acid-sequence (RAGLQFPVGRLLRRLLRRLLR). We can see that BIIB with 21 amino acids has the most helices followed by MV1 (17 aa) and then MV2 (13 aa). From this, we can infer a stepwise reduction of alpha-helicity induced hydrophobicity in each modified version following BIIB resulting in increased interaction with upregulated phosphatidylserine and O-glycosylated mucins in the neoplastic cell membrane. The possibility of such an event points to a higher cellular uptake of MV1 and MV2 relative to that of BIIB from which we can infer a relatively higher induced cell death.

We can also see from Fig. 4 a stepwise elimination of C-terminal RLLR - the decreasing protein size following each modified version from which we can infer a stepwise reduction in the positive charges of the protein. Given that positively charged BR2 (17 aa RAGLQFPVGRLLRRLLR -- MV1 in our experiment) specifically interacted with negatively charged gangliosides on cancer cell plasma membranes in the prior research conducted by Lim et al. (2013), we can infer that out of MV1 and MV2, MV1 may confer higher cell specificity levels.

Overall, looking at the model, we can predict that MV1 and MV2 (with shorter amino sequences and thus less predicted hydrophobicities) will have a better performance in both inducing cancer cell death and targeting cancer cells without harming normal cells than BIIB, with special emphasis on the potential statistical significance of MV1. The hypotheses are in accordance with the lab results as MV1 and MV2 had similar levels of cytotoxicity to normal cells and MV1 displayed the highest cell-specificity proven through Prestoblue Assay and RT-PCR, respectively.

Team Korea_HS believes that the protein modeling of Buforin IIb, MV1, and MV2 will be able to increase the possibility of developing successful cancer therapeutics using the Cell Penetrating Peptide (CPP). This is because we can understand the exact cause behind the success of MV1 in an array of criteria (including cell specificity, induced cell death, cytotoxicity, etc.) as opposed to the shortcomings of BIIB (in almost all aspects) and MV2 (in several aspects). Although we have not conducted experiments to clarify the phenomenon behind MV1’s superior performance regarding cytotoxicity, we predict that it may be due to MV1 causing less cellular stress, and subsequently, rarely inducing apoptosis.

Once we conduct the necessary experiments to clarify whether our hypothesis is correct, and if not, to bring to light the real reason behind MV1’s superior performance, we will be able to tie our results to the PEPFOLD models we have already generated, from which we will attempt to deduce the exclusive structural properties of MV1 that have made it a successful peptide. Taking into account our inferences, we will be able to benefit the scientific community by introducing unprecedented knowledge regarding the different qualities peptide structures must possess, which the community may employ at any point in developing cancer therapeutics.

Program for Future Use: MATLAB

MATLAB is the programming platform for implementing algorithms, creating models, and analyzing data through mathematical methods. This year, Korea_HS attempted to use MATLAB to program the model of the cancer-specific cell-penetrating peptide and its efficacy. Unfortunately, MATLAB is one of the programs that Korea_HS was unable to use even though our team had contacted the professor and other teams. Still, Team Korea_HS believes that MATLAB is the program which will help us expand our knowledge. Korea_HS believes that compared data of specificity and cytotoxicity of the original cell-penetrating peptide and modified version can be modeled.

The cytotoxicity of the CPP can be measured by using the formazan dyes or measuring the ATP content of cells after release. Additionally, with MATLAB, the mode of CPP delivery and their interaction between cancer cells and normal cells, the stage of lung cancer that CPP can be delivered and function, and the concentration of CPP can be modeled. The in vivo experiments of the project will be one of the possible solutions to this because it provides more specific and reliable data of specificity and cytotoxicity of the cell-penetrating peptide on the target cells.

Program for Future Use: CellDesigner

CellDesigner is a standard diagram editor for visualizing gene-regulatory and biochemical networks. Drawn on a process diagram, networks are stored via Systems Biology Markup Language (.xml), often integrated with SBML ODE Solver or Simulation Core for simulation and parameter scan. Systems Biology Graphical Notation - process description, entity relationships, and activity flow - allows for versatile construction of central dogma (in a compartment) with graphically notated parameters. This program was introduced by Team Greece_United (NOUS) and although this program wasn’t utilized this year for its requirement of extensive training and subsequent wet lab integration, Korea_HS believes its potential application to the project.

Intracellular dynamics of cell lines A549 and MRC5 - upregulated CYP1A1 and normalized GAPDH expression - can be depicted schematically to provide deterministic modeling of RT-PCR (analysis of gene silencing/transfection efficacy of CPP/siRNA complex and band intensity quantification via ImageJ Program and normalized graphical representation) performed in this study. Utilizing RT-PCR-derived parameters and initial values (i.e. biochemical reaction), and simulation via ControlPanel allows for the analysis of optimal CPP/siRNA concentrations, visualized via optimal case-upregulation of Dcr2-R2D2 or RLC (A) (i.e. RISC-induced complex) or downregulation of cytochrome P450 1A1.