1) What is the purpose of our design?

The purpose was to design a cancer-specific short peptide for the efficient delivery of siRNA into target (cancer) cells.

2) Which biological parts will be required to implement function? 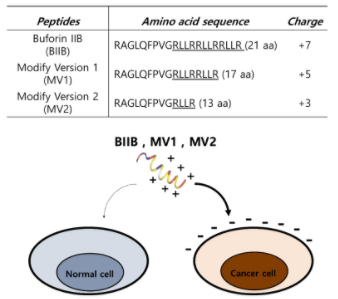 1) Will you need to generate different variants of your build?

We discovered that buforin IIb had RLLR repeats at the C-terminal end. We hypothesized that deleting the RLLR sequence may lower cell cytotoxicity and increase the siRNA delivery because the shorter peptide together with a positive charge has the advantage of entering through the cell membrane.

2) How can you screen for correct builds?

1) Which types of measurements are needed?

It is used to measure cellular metabolic activity as an indicator of cell viability, proliferation, and cytotoxicity. This colorimetric assay is based on the reduction of a yellow tetrazolium salt (3-(4,5-dimethylthiazol-2-yl)-2,5-diphenyltetrazolium bromide or MTT) to purple formazan crystals by metabolically active cells. The viable cells contain NAD(P)H-dependent oxidoreductase enzymes which reduce the MTT to formazan. The insoluble formazan crystals are dissolved using a solubilization solution and the resulting colored solution is quantified by measuring absorbance at 570 nanometers using a multi-well spectrophotometer. The darker the solution, the greater the number of viable, metabolically active cells.

Reverse transcription converts the RNA to cDNA. Then PCR amplification amplifies the template cDNA. Agarose gel electrophoresis allows detection and quantification of amplified DNA. PCR amplification can be broken down into three phases. The exponential phase occurs when the reaction components are in excess, thereby theoretically allowing for a doubling of the PCR product per cycle. In the next phase, the amplification of the PCR product occurs linearly rather than exponentially as the reagents are partially depleted. Then, the plateau phase represents the point in which the amplifications have further slowed or have completely stopped. The end product of PCR is analyzed in the agarose gel. The band intensity of the amplified gene detected on the agarose gel is correlated with the target RNA copy number at the linear phase.

2) Are your units arbitrary, relative, or absolute?

It is measured by the spectrophotometer – absorbance of 570 nm.

The target gene expression must be normalized by GAPDH (housekeeping gene).

1) Did your system work as anticipated? 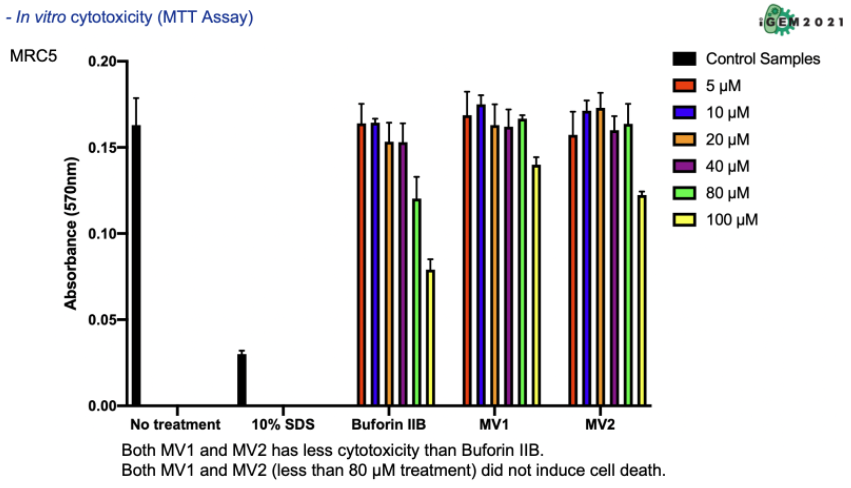 Both MV1 and MV2 have low cytotoxicity compared to buforin IIB.

2) How does your experimental data compare to your model? 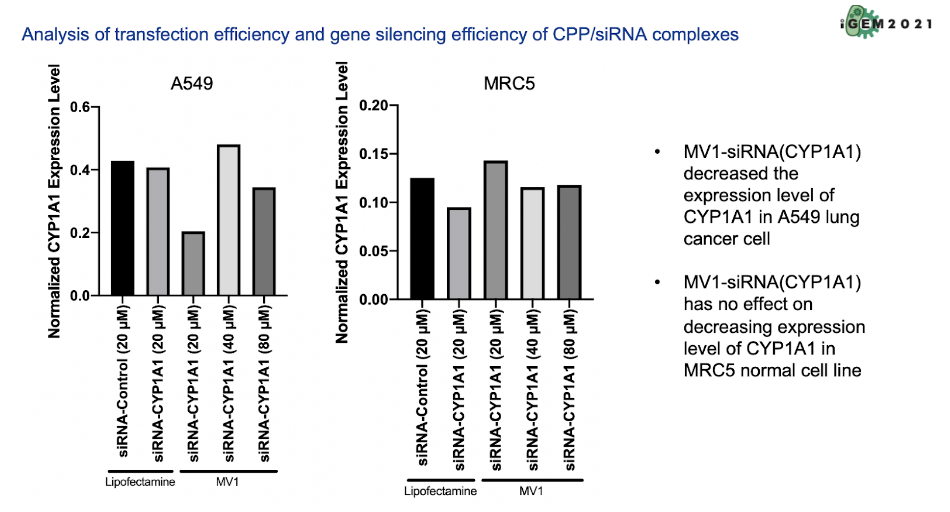