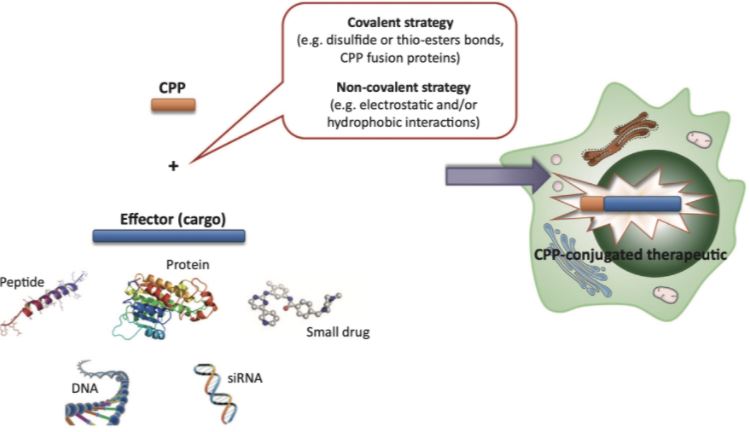 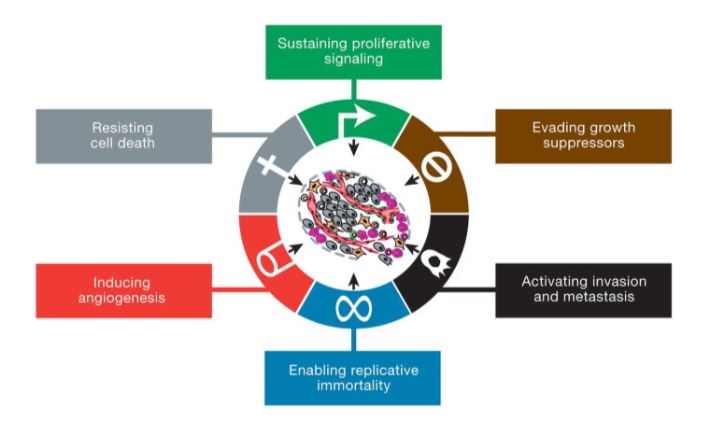 Modification and Assessment of Target CPP

A careful literature review was performed to select a cancer-specific cell-penetrating peptide. Cases of cationic antimicrobial cell-penetrating peptides (AMPs) displaying anti-cancer activity have been extensively reported in the literature. Studies of melittin, cecropins, and mainins - to ras oncogene overexpressed and neoplastic cells, respectively - have been investigated. To date, AMP is understood to induce cytolytic activity via the formation of ion-permeable membrane channels, but the precise anticancer mechanism is yet to be elucidated. Herein, buforin II (TRSSRAGLQFPVGRVHRRLLRK, Sphaenorhynchus lacteus), a histone H2A derived AMP with helix-hinge-helix structure and 𝝰-helix, was reviewed for its bacterial penetration selectivity and cytotoxicity.

Buforin IIb displays cytotoxicity at high concentrations. Helicity and cytotoxicity of 𝝰-helical AMPs are understood to be directly related - complete non-polar face (or hydrophobicity) inducing hemolytic activity. Lim et al. in 2012 thereby demonstrated BR1 (RAGLQFPVGRLLRRLLR, MV1 in this research) and BR2 (RAGLQFPVGRLLR, MV2 in this research) via stepwise elimination of RLLR C-terminus, retaining cancer cell specificity with minimized alpha-helical cytotoxicity in vitro. Internalization of BR1 and BR2 is attributable to clathrin-independent lipid raft-mediated macropinocytosis not fusing with early endosomes and bypassing lysosomal pathways. Ergo, BR1 and BR2 are noteworthy cancer therapy candidates with the feasibility of covalent conjugation with bioactive cargoes in vivo.

Fluorescent dye fluorescein isothiocyanate (FITC) was conjugated to peptides of interest (PI: buforin IIb, MV1, and MV2) via primary amine. Hence, PI-FITC constructs were designed, which following covalent conjugation (incubation) were excited at 450nm (argon laser) and collected at 530nm via confocal microscopy for FITC cell specificity analysis. Colocalization of nuclei and gross cell morphology were performed via 4’,6-diamidino-2-phenylindole (DAPI) staining - merged with PI-FITC construct localization for the assessment of the intracellular distribution and transfection efficacy. Herein, all assays were performed on cell lines A549 (human lung adenocarcinoma) and MRC5 (human normal lung). Colorimetric MTT (3-(4,5-dimethylthiazol-2-yl)-2, 5-diphenyltetrazolium bromide) metabolic assay was performed for the evaluation of PI construct (buforin IIb, MV1, and MV2) cell cytotoxicity to proposed cell lines (A549 and MRC5). Yellow MTT was reduced to purple-colored formazan via mitochondria-dependent pathway (reductase) of viable cells quantified under 550-600nm by ELISA reader. Both assays were performed in a dose-dependent manner. 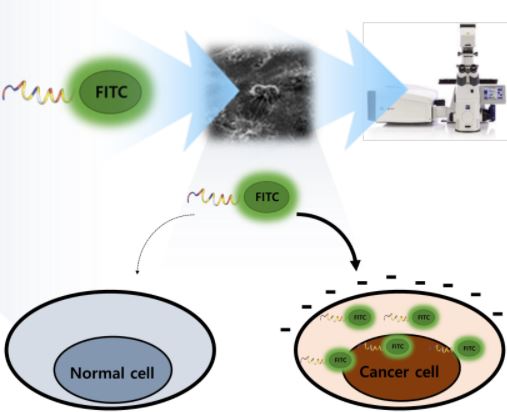 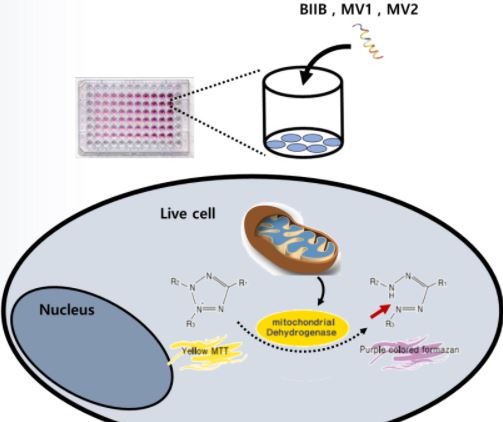 Identification and Assessment of Target siRNA

siRNA, or small interfering RNA, is a class of double-stranded RNA molecules. They are 20~25 nucleotides in length (usually 21-nucleotides) with two nucleotide 3’ overhangs on each strand. Introduction of siRNA to the cell causes RNA interference or RNAi, a sequence-specific target mRNA cleavage through siRNA winding and RNA-induced silencing complex (RISC) formation; that is, siRNA has the ability to specifically inhibit target gene expression. It is apt to identify the lead compound rapidly, synthesize easily, and target any protein. Yet, it is also prone to degradation and possesses a short half-life along with a high molecular size and a strong anionic charge - all of which can hinder intracellular delivery.

We have chosen to target the CYP1A1 gene which encodes cytochrome P450 1A1 with siRNA. Doxorubicin is a chemotherapy drug designed to inhibit the proliferation of cancer cells via DNA intercalation and topoisomerase II degradation. However, use over an elongated period of time can lead to the development of drug resistance in cancer cells through mutation. A study conducted by AbuHammad and Zihlif in 2012 aimed to find out which genes were associated with gene alterations leading to doxorubicin resistance in MCF7 breast cancer cells through results of an MTT assay and real-time based PCR array performed on doxorubicin-resistant MCF7 breast cancer cell line, displayed an up-regulation of CYP1A1 and CYP1A2 that were up-regulated by 206- and 96-fold respectively. From this prior research, we derived our choice to target CYP1A1 as we determined that if we are able to silence CYP1A1 with the appropriate siRNA, we will be able to most effectively decrease anticancer drug resistance.

Several peptides can absorb on the surface of siRNA leading to the complexation of siRNA with multiple peptides and subsequently a CPP-siRNA complex. Peptide-nucleic acid complexation is largely caused by electrostatic interaction where the negatively charged backbone of the polynucleotide is the primary interactor with the positively charged species. The dense complexes that form as a result have a net positive charge as multiple peptides can bind to one siRNA. However, the ideal ratio of CPP:siRNA for effective translocation must be determined experimentally. Then, these complexes can aggregate and translocate through the cell membrane to carry out desired intracellular function - in our case, target gene silencing and delivery of therapeutics.

To see that sequence-specific gene silencing and subsequent target mRNA cleavage have occurred, we will perform a reverse transcription-polymerase chain reaction also known as RT-PCR. RT-PCR is one of the most sensitive methods of mRNA detection and quantitation currently available. It catalyzes DNA synthesis using existing RNA as a template leading to a product known as complementary DNA (cDNA). With this product, normal PCR amplification proceeds to determine if the treated cell lines do, as predicted, present a statistically insignificant quantity of CYP1A1 phase I gene or don’t. 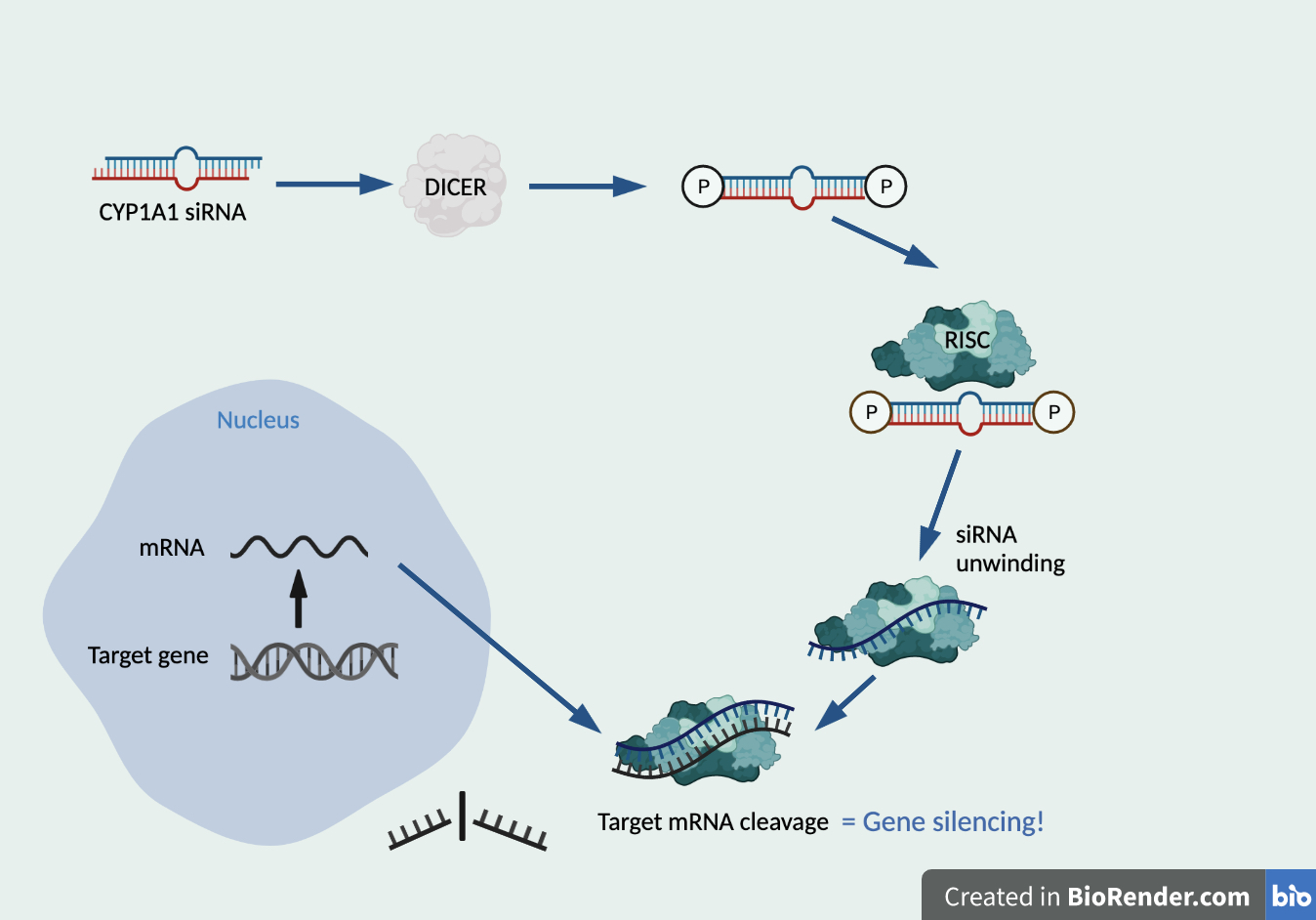 ( siRNA is a mode of RNA interference that can target specific mRNA and induce inhibition of gene expression.) 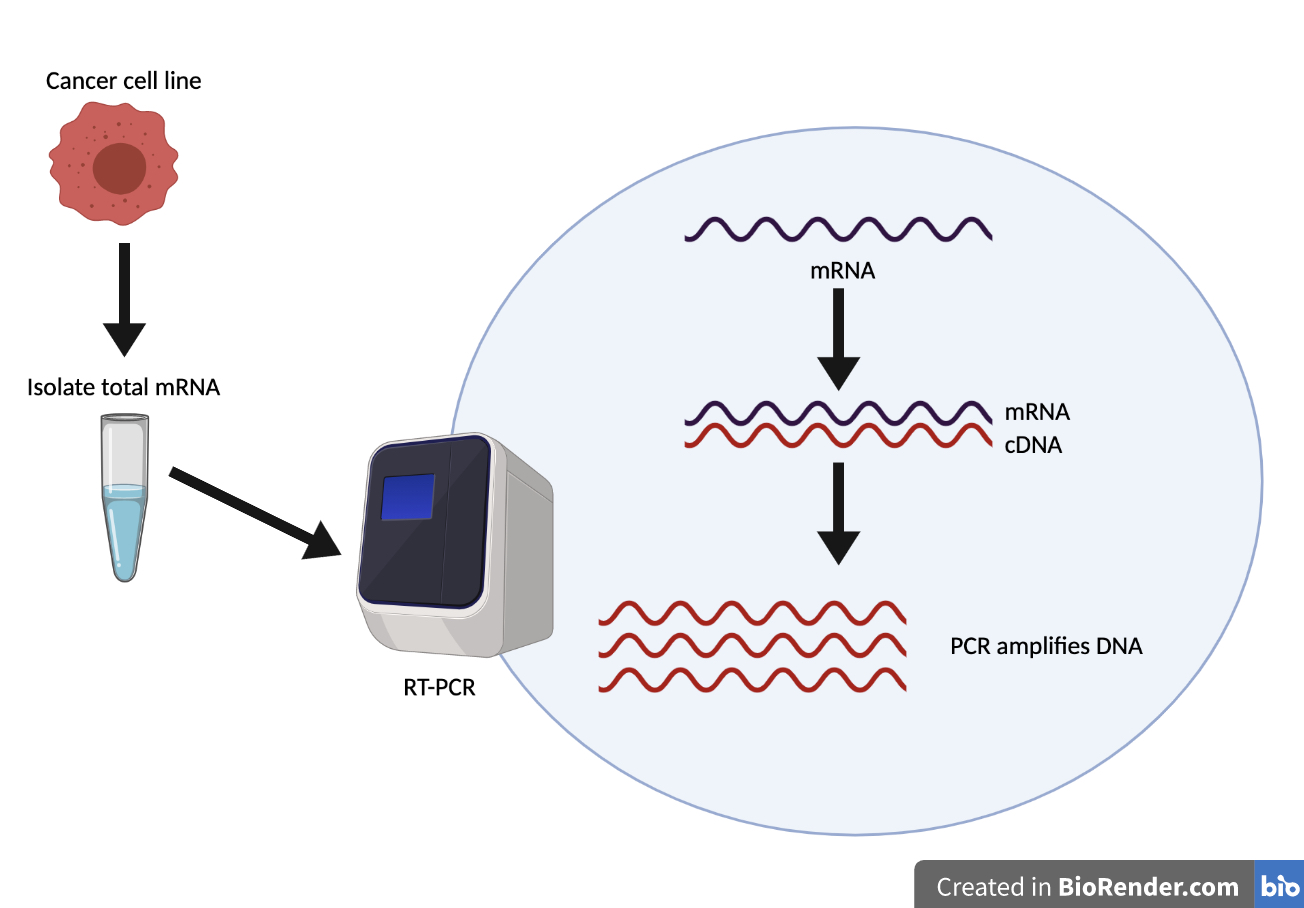 (RT-PCR can detect presence and quantity of given mRNA by quantifying cDNA reversed-transcribed from the RNA.) 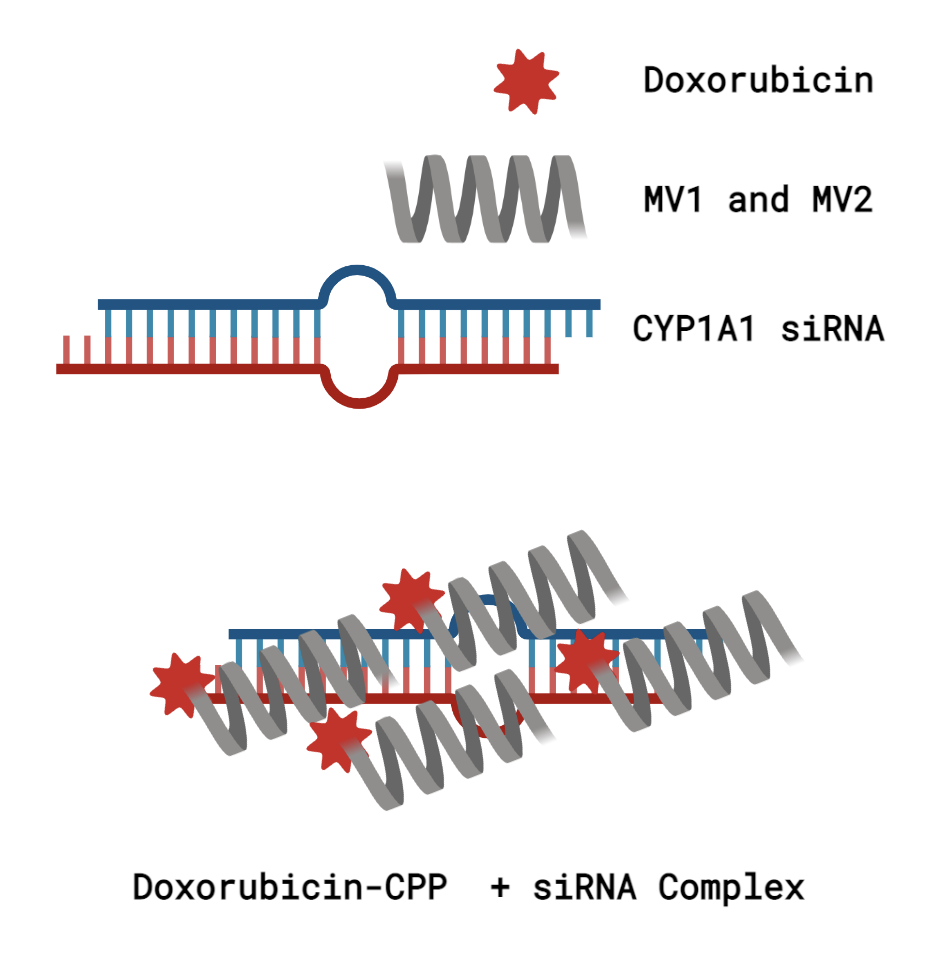 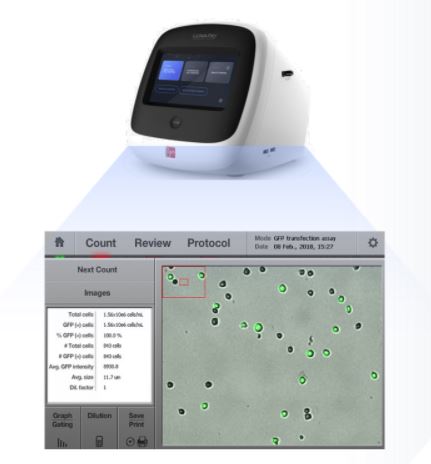