As said by both Dr. Sungjun Yoon, one of three professionals whom we interviewed, and Lim et al. in the 2013 report A Cancer-Specific Cell-Penetrating Peptide, BR2, for the Efficient Delivery of an scFv into Cancer Cells, while buforin IIB has selective cytotoxicity to cancer cells, hence being cell-specific, it can also be cytotoxic to normal cells at high concentrations. Huang et al. in 2012 demonstrated that stronger a-helicity generally indicates a complete non-polar face of the helix, which correlates with higher hydrophobicities of anti-cancer peptides and a higher risk of inducing cell membrane lysis. To ameliorate this issue regarding the hindrance of cellular uptake and effect on cell viability, we modified BIIB (RAGLQFPVGRLLRRLLRRLLR, 21 aa) by stepwise deletion of C-terminal RLLR: resulting in MV1 (RAGLQFPVGRLLRRLLR, 17aa) and MV2 (RAGLQFPVGRLLR 13aa). By reducing peptide helicity, we hoped to design a CPP with low cytotoxicity and high delivery yield.

*Both MV1 and MV2 were evaluated, but the improvement was only shown in MV1.

With a motif of stepwise 𝛂-helical RLLR C-terminus deletion, MV1 and MV2, synthetic analogs of buforin IIb, were designed. Buforin IIb, MV1, and MV2 were synthesized via MilliGen 9050 peptide synthesizer (Anygen, Kwangju, Korea). Modified amino acids sequences are devised. To validate the improvement of an existing part, assays below were performed and analyzed. 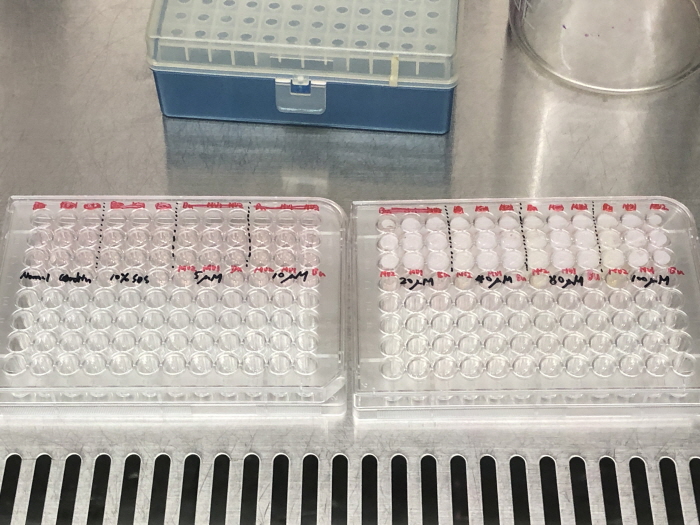 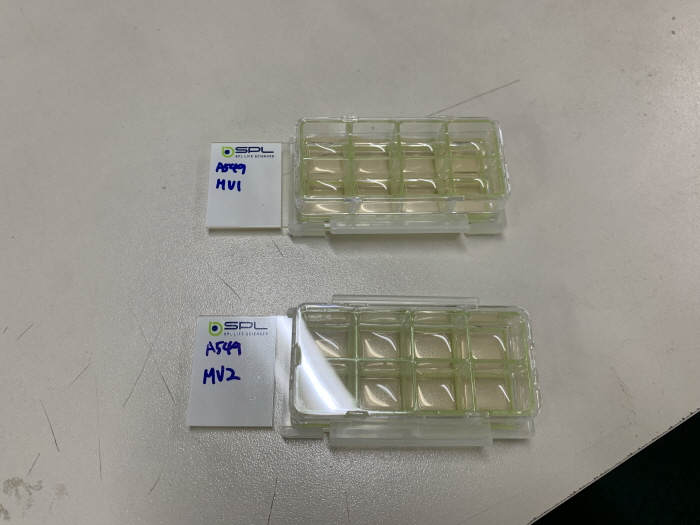 N-terminus FITC was conjugated to buforin IIb, via an aminohexanoic acid spacer treated resin-bound peptide with FITC and diisopropyl ethyl amine in N, N-Dimethylformamide (DMF). Hence, buforin IIb/MV1/MV2-FITC synthetic constructs were designed, which following incubation (with A549 and MRC5) were excited at 450nm (argon laser) and collected at 530nm via confocal microscopy for FITC cell specificity analysis. During the engineering process, fixation was performed via methanol. Colocalization of nuclei and gross cell morphology were performed via 4’,6-diamidino-2-phenylindole (DAPI) staining - merged with PI-FITC construct localization for the assessment of the intracellular distribution and transfection efficacy. Samples mounted on microscope slides are devised above. 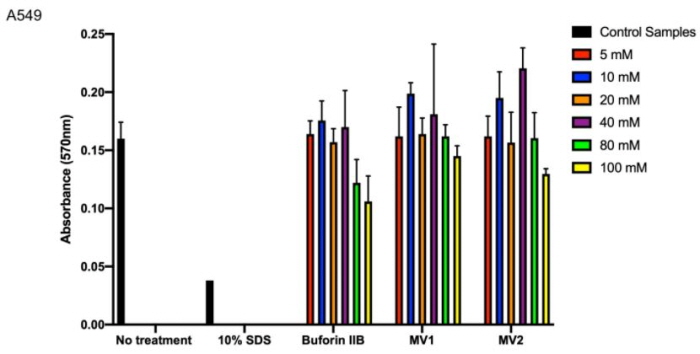 In both A529 and MRC5 cancer cell lines, as assessed by MTT cytotoxicity assay, BIIB viability demonstrated significant inferiority to both MV1 and MV2. As can be seen in the two graphs, A549 and MRC5 cell viabilities were higher under MV1 and MV2 treatments (at approximately 0.17 pdu) than they were under the administration of buforin IIB: which showed significant cytotoxic activity with approximately 0.11 pdu when observed under high concentrations (80-100mM). 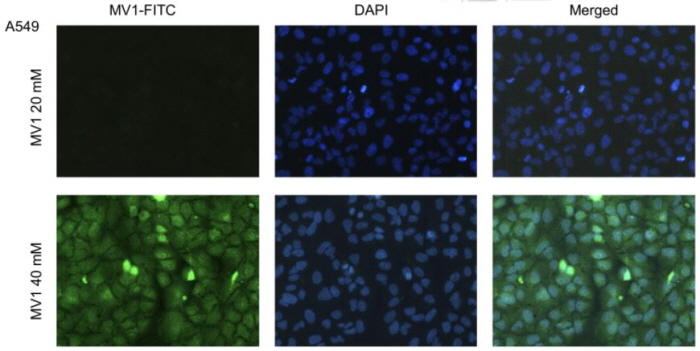 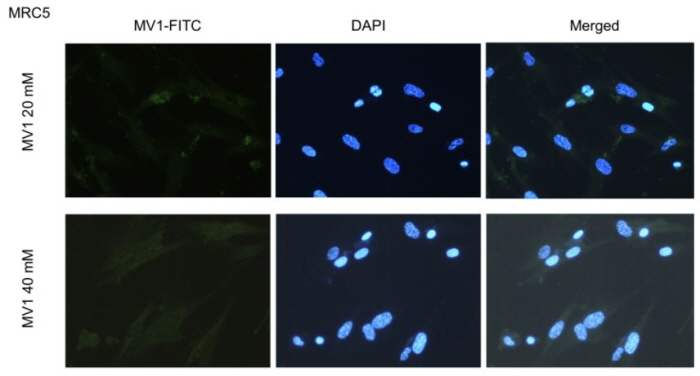 These results are in strong accordance with those of Lim et al., who also demonstrated BR2 (same sequence as MV1) superiority to BIIB in terms of specific internalization of FITC-labeled peptides. Therefore, the two peptides with comparable viabilities — MV1 and MV2 — were assessed regarding their selective capacities; when examined through gross morphology, the penetration efficacy of MV2 was too low and thus was not included in the data. Furthermore, using a concentration-dependent FITC, we were also able to determine the optimal concentration of MV1 for efficient cargo delivery.

Given the considerable disparity between the cytotoxicity and penetration levels of the two modified peptides and BIIB, it would be appropriate to conclude that removal of C-terminal RLLR has made for improved cell viability and cellular uptake.