To gain further understanding of the clinical applicability, possible side effects expressed during in vivo experimental conditions, and the future of CPPs in the biomedical field and market, our team has consulted Sungjun Yoon, Ph.D. At the time of our interview with him, he was a researcher at Rheinisch-Westfälische Technische Hochschule Aachen University Institute for Molecular and Cellular Anatomy specializing in keratin mutations. From this interview, we have not only expanded our knowledge of the implications of our CPP in vivo conditions but have also derived a critical experimental decision.

Dr. Yoon confirmed that CPP-based treatments are distinguished therapeutics owing to their selective cytotoxicity and high cell-specificities. Therefore, he speculated that our peptide would be able to exhibit the same qualities that characterize CPPs in vitro — specific cellular uptake of the attached cargo (Doxorubicin and siRNA) and subsequent desired intracellular events (gene silencing) — and has the potential to be an effective chemotherapeutic if it does not pose severe risks to human health (as would be confirmed by 3 phases of clinical trials). Consequently, Dr. Yoon remarked that CPPs, due to their efficacy in delivery and versatility, can become an area of focus in the following years. However, Dr. Yoon expressed doubts about safety under in vivo conditions, especially about immunogenicity, cytotoxicity to normal cells, and the ensuing effects. He noted that to test for the degree of immunogenicity and cytotoxicity, while there are few immunoassays that do not require in vivo elements (ex. Blood sample), MTT or Prestoblue assays can, too, assess cytotoxicity.

As Dr. Yoon suggested, we could not address the problem of potential in vivo immunogenicity under an in vitro setting. Thus, we prioritized addressing the problem: cytotoxicity. Dr. Yoon specifically stressed the importance of maintaining cell viability and peptide-specificity — both of which, according to him, could be compromised by high concentrations of Buforin IIB. To conserve (or perhaps even improve) the existing specificity of Buforin IIB while addressing the cytotoxicity issue, we have decided to modify BIIB into two shorter peptides: MV1 and MV2. As proven by Lim et al. in 2013, hemolytic and cytotoxicity are closely correlated with the peptide’s helicity. So, by removing the C-terminal and reducing a-helicity, we believe we can create CPPs with reduced cytotoxicity. In addition, from the stepwise reduction of a-helicity induced hydrophobicity from BIIB → MV1 → MV2, we can hope for increased interaction with the cancer cell membrane and improved uptake. 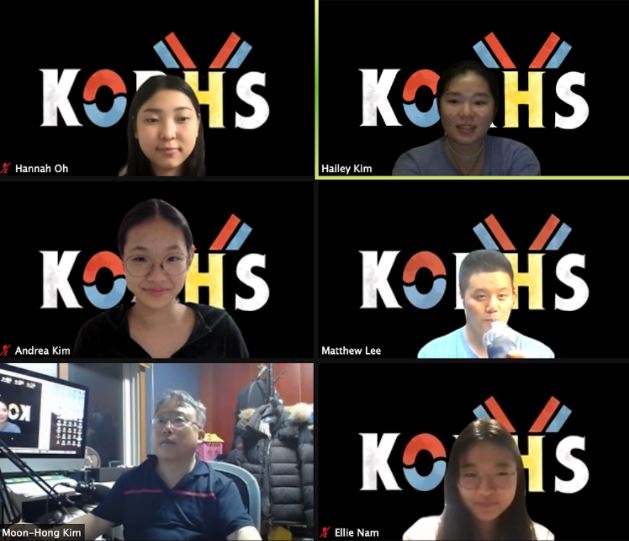 Towards the beginning of the peptide-design stage, we consulted Dr. Moon-hong Kim, Ph.D., an obstetrician/gynecologist at Korea Cancer Center Hospital. As Dr. Kim specializes in gynecologic oncology, we sought his opinion regarding the potentiality of our treatment, future implementation of our peptide, the steps required for any treatment to be made available, and the prospects of CPPs in the market. Overall, team Korea_HS enjoyed an informative and fruitful discussion with Dr. Kim as he was able to impart his own knowledge regarding CPP-based cancer therapeutics onto us and we were subsequently able to amend the design of our peptide so that it would prove more suitable for in vivo use.

Dr. Kim’s primary comment was that while theoretically, CPP-based treatments have exclusive advantages (selective cytotoxicity, specificity, etc.), it is usually the case that under in vivo conditions, there are different issues with cargo delivery that impede proper and successful translocation across the cell membrane, as well as cargo detachment from CPP before the CPP degrades and he was concerned that these issues may apply to our peptide. Dr. Kim also stressed the importance of clinical trials as they determine whether a novel treatment such as our peptide is safe and superior to existing therapeutics. He elaborated the different phases of clinical trials: I) patient safety, II) the efficacy of the treatment, and III) evaluation of treatment on a large scale. Due to the numerous stages of testing required for a treatment to be made commercially available, he concluded that it might take some time for CPP-based therapeutics to be made despite their practical advantages.

From observing clinical trials testing CPPs and similar treatments with intracellular delivery mechanisms, Dr. Kim has seen cases in which a protein intended to bind with siRNA to allow for cellular uptake bound with siRNA too strongly due to its high avidity and was unable to detach from the vehicle. Therefore, he hypothesized that CPP-DRBD mediated siRNA delivery may have the potential to inhibit siRNA interaction, in which case, the desired gene silencing would not occur. Korea_HS decided we would remove DRBD from our fusion peptide, fundamentally creating a CPP-siRNA-Doxorubicin peptide. We ensured that a lack of DRBD would not completely rid the complex of any specificity as the complex itself would still have a positive charge and thus would still be able to interact with the anionic membrane to direct itself exclusively to cancer cells. We have also referenced previous literature (Lim et al. 2013), one that has tested the effect of a BR2-BIIB-scFV peptide on cancer cells and has shown the peptide’s potential for selective cytotoxicity.

Towards the end of our experimental stage, we sought advice from Youngwoong Lee, Ph.D. who at the time of the interview was affiliated with the Korea Advanced Institute of Science and Technology Department of Biological Sciences (Daejeon, Korea). He was also one of the authors of previously referenced literature published in 2013, in which a cancer-specific cell-penetrating peptide, BR2, was tested for the efficient intracellular delivery of an scFV. Recognizing that Dr. Lee’s previous research investigated the potential of CPP-based cancer therapeutic in parallel to Korea_HS’s undertaking, we sought his insight in order to determine the performance of our product.

When asked about the merits of our fusion CPP regarding efficiency, reliability, and economic value, Dr. Lee was confident that (drawing from his prior research with a CPP-based therapeutic) our cancer cell-penetrating-peptide had the potential to serve as a practical cancer therapeutic, as it would most likely display selective cytotoxicity and specificity likewise to BR2 that he had already experimentally confirmed to have been readily internalized into cancer cells but not normal cells. He remarked that our treatment had significant advantages which other existing methods such as radiation therapy and chemotherapy did not have. However, he said, until further research is done on our peptide, we will not be able to confirm whether it displays therapeutic performance superior to that of existing treatments. Furthermore, regarding the economic value of our peptide, Dr. Lee remarked that although the process of making our treatment clinically applicable may be costly, CPP-based delivery systems are easy to produce and thus low cost.

As our team required a method of assessing the specificity of our peptide and recognizing that Dr. Lee was able to obtain extensive data regarding cell-specificity in his scFV peptide research, we questioned the method Dr. Lee employed himself. Dr. Lee responded that he and others utilized live confocal microscopy by labeling peptides with FITC, incubating, and analyzing the cell lines using a confocal scanning laser. In the lab session following the interview, our team members executed a FITC specificity assay to determine MV1 cell specificity and intracellular distribution. After incubation, as Dr. Lee suggested we perform, we placed stock-media mixture (FITC-MV1-CPP) onto the cell samples, which were then excited with an argon laser and merged with a DAPI staining image. Overall, our timely interview with Dr. Lee aided our team in determining the appropriate method of assessing product performance.