LGBTTTQQIAA, or LGBTQ+ in short, defines Lesbian Gay Bisexual Transgender Transsexual Two-Spirit Queer Questioning Intersex Asexual Ally. Although 1% to 3% of the world’s population is reported to be classified under LGBTQ+, discussions of COVID-19 health and economic crises persist, whilst discussion of experiences of and attitudes towards the LGBTQ+ community has been overlooked. This ignorance has been ameliorated by the publicization of LGBTQ+ via recent uprisings of Generation Z and millennials, yet its demographics (i.e. inclusivity status) in STEM has not been fully scrutinized. From a meta-analysis of literature, the LGBTQ+ community, amongst underrepresented factions in STEM, often reported a lack of representation and disproportionately negative effects inside and outside of the workplace. Hence, to foster discussions about inclusivity in STEM (and their urgency) which is pivotal to humanistic liberalism and advancements in STEM, we have focused on inclusion demographics and initiatives of the LGBTQ+ community. 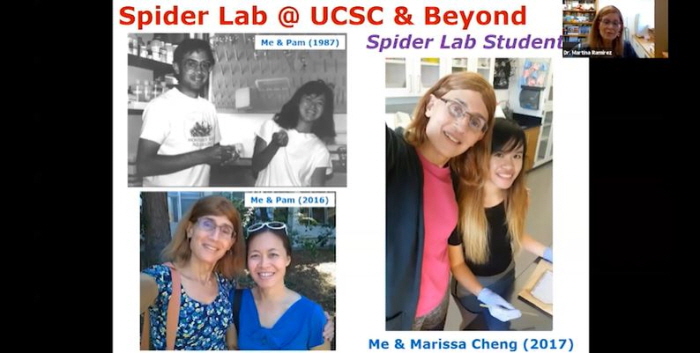 Our first interviewee was Martina Giselle Ramirez, a professor of biology and the Former Director of the Center for Teaching Excellence. As a woman faculty member at four different institutions during the 1990s, she experienced everything from memos being circulated behind her back to losing out on long-term employment opportunities due to her ethnicity and living openly as a transgender. This caused her first 11 years to “go into the closet” as a faculty member at LMU. The key driving factor that was contributing to all forms of inequalities was that during those years, LMU had much less diversity in terms of gender and ethnicity among its faculty members than it does today.

Since there were inequalities towards LGBTG+ practitioners in STEM, she decided to support the success of marginalized students in STEM by encouraging them to follow her Prime Directive. The existing STEM workspaces, STEM-related organizations, and non-LGBTQ+ STEM professionals can accommodate and support LGBTQ+ in STEM simply through mentorship to participate in the study. Their participation in mentorship and academic work with faculties can increase their retention and performance.

As aspiring students of STEM, we can take action to promote a social atmosphere that encourages the inclusion of the LGBTQ+ community in STEM. We can build ourselves an online community that represents a range of diverse perspectives. This can help to elevate voices of those that are often disregarded and support a more representative space online. We can actively seek out LGBTQ+ voices to help understand new concepts, perspectives, and ideas by following them or resharing content to boost the reach of their profiles. 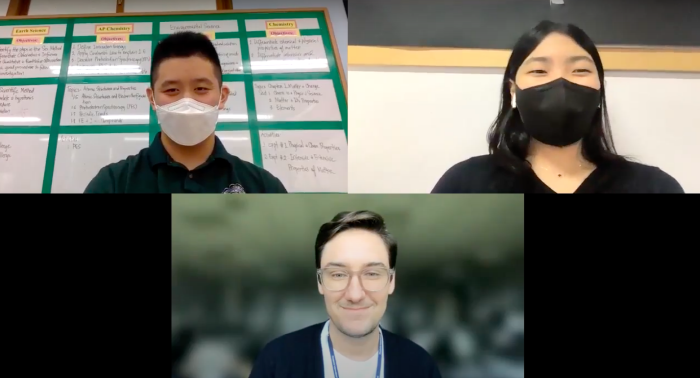 To gain insight into the perspectives of LGBTQ+ at school, our team interviewed Mr. John Tilert, a teacher at Chadwick International and organizer of the school’s Kaleidoscope Club aimed to support LGBTQ+ students at school. From this interview, we have not only learned about the lack of representation of the LGBTQ+ community in STEM but have also delved into the different methods students and schools can adopt in order to maximize the inclusion and normalization of the minority group.

Mr. Tilert identified the key driving factors of inequalities towards LGBTQ+ practitioners in STEM as the STEM field’s predominantly white and male population. He explained that power is usually concentrated towards white males, therefore making it difficult for minorities to receive career opportunities and fair treatment. He further mentioned that, because the LGBTQ+ community is a hidden minority unlike race or sex, there is a lack of conscious effort to include the minority group.

In an effort to promote LGBTQ+ representation in STEM, Mr. Tilert is an active member of Chadwick International’s diversity, equity, and inclusivity team. This team of students and teachers connects with other student-led LGBTQ+ rights groups around the world to plan inclusivity initiatives to be held at their respective schools.

Mr. Tilert continued to stress the importance of creating a diverse and accepting environment for students. He suggested that sharing STEM professionals from a range of backgrounds, including race and sexuality, during science or math classes can inspire students to be more open and comfortable about themselves as they are affiliated with diverse identity groups from a young age. Mr. Tilert stated that people must witness others expressing their unique identities first in order to feel comfortable doing so themselves. This inspired our team to create an LGBTQ+ Awareness Instagram Page, a platform used to encourage the minorities to voice themselves as well as introduce STEM facts relating to the LGBTQ+ community!

Over the course of 5 weeks, Korea_HS Inclusion members have written a 1200-word-long inclusion report and plan which includes a detailed explanation of the status quo of LGBTQ+ personnel in STEM. The report was analyzed according to three criteria we deemed most pertinent -- career limitations, professional devaluation, life outside the lab -- along with a justification about the importance of improving current circumstances not only for the benefit of LGBTQ-affiliated individuals but also for everyone in STEM, and a plan of action that aims to address the marginalization of the group in different STEM settings with input from LGBTQ-identifying STEM professionals we interviewed.

We have presented both quantitative and qualitative data in both written and pictorial forms to aid the readers’ comprehension regarding the degree of marginalization faced by STEM LGBTQ+ personnel in the status quo. The data was largely collected from reference to literature, most notably a general inclusivity study conducted by sociologists (Cech et al.) at Temple University which analyzed data collected from 21 scientific US societies. Despite the fact that the context of data was the US, we ensured that our plan of action was applicable to a wide variety of settings, namely, STEM communities in South Korea. Our intent for this report was to 1) spread awareness about the subtle marginalization the group faces in the field, as the issue of LGBTQ in STEM has not gained as much visibility as those regarding other minorities (such as women in STEM) and 2) to invite others to employ or, even better, expand upon our plan for LGBTQ inclusion in academia. 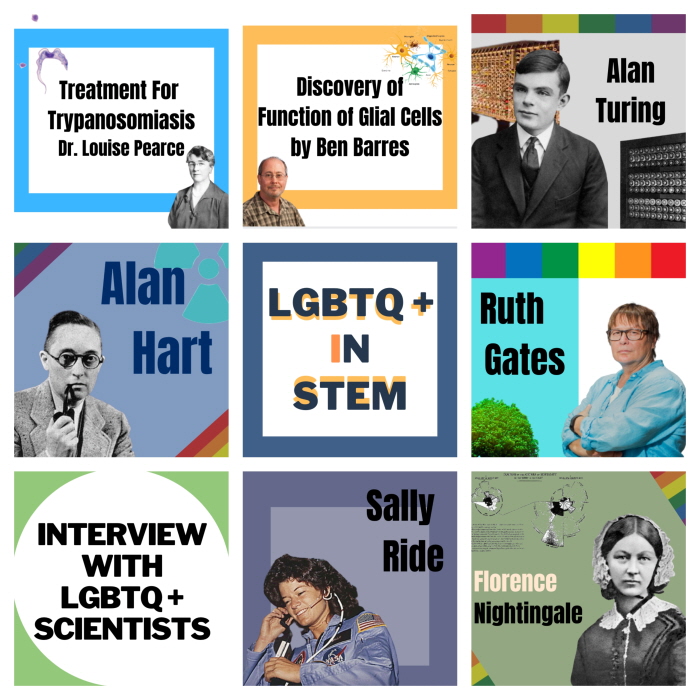 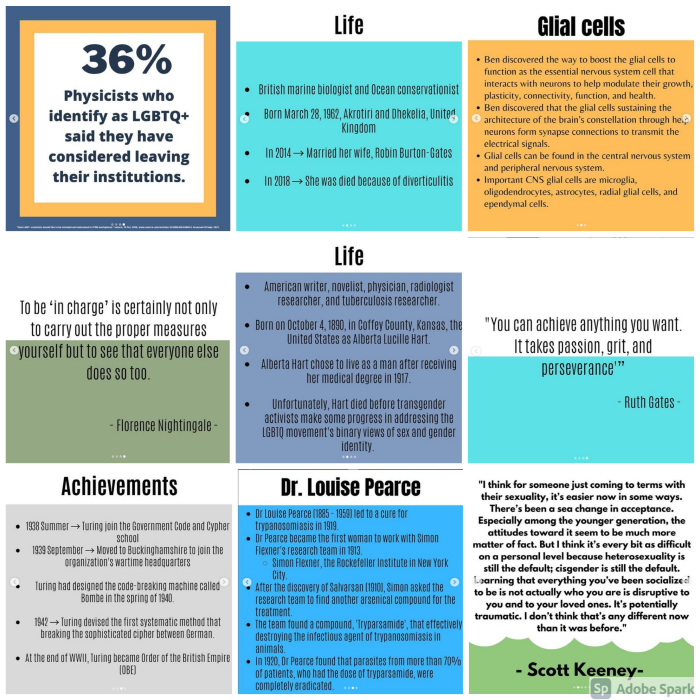 From September 9th to September 25th, Korea_HS established the "LGBTQ+ in STEM" project through the Korea_HS Instagram account. Korea_HS posted two projects every week, resulting in a total of eight posts. We divided the theme of the posts into three different themes, including, the introduction of prominent LGBTQ+ scientists, scientific invention or discovery by LGBTQ+ scientists, personal story (hardships) as an LGBTQ+ scientist, abstracts and significant words from interviews, and, lastly, statistics about LGBTQ+ in the STEM field. Korea_HS chose to use bullet points and photographs to increase the delivery of information and accessibility of the public.

Instagram is a platform where people can share information openly and easily. Thus, team Korea_HS chose to publish the posts through our Instagram account. The public is aware of issues about LGBTQ+ but usually, they do not get the opportunity to learn the problem in depth. Therefore, Korea_HS used social media to promote this topic through social media to achieve our goal of increasing awareness and support of the public.

Surprisingly, this project even gave us the opportunity to educate ourselves. During the research and paraphrasing, we learned about the unexpected inventions by LGBTQ+ scientists, their excellent achievements, learned wise and practical advice from their sayings, and the fact that small steps can also support the LGBTQ+ and impact the public. This project was a great opportunity for Korea_HS members to recognize the importance of inclusivity in STEM areas and how to support them. 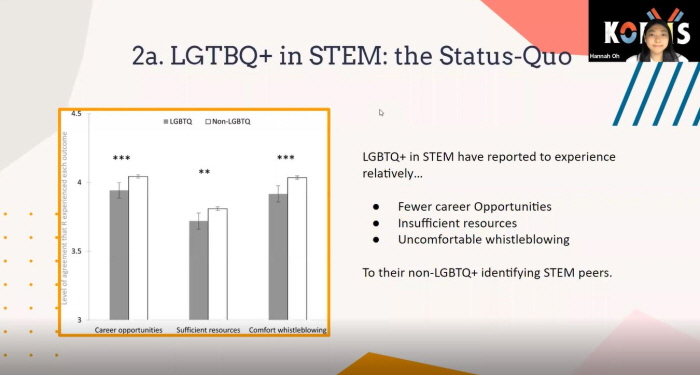 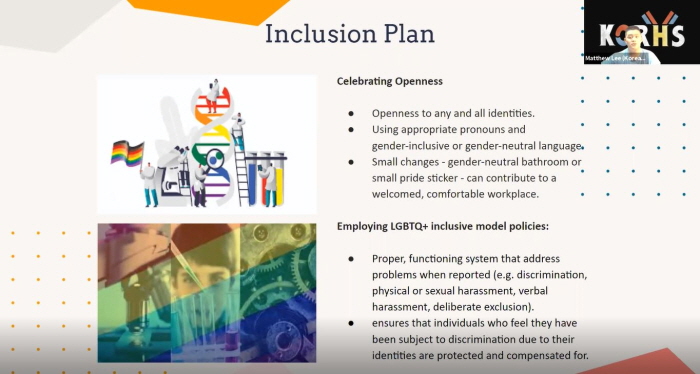 On October 19th, 2021, we hosted a virtual talk show (webinar) “LGBTQ+ in STEM.” Hannah Oh and Matthew Lee, speakers at the event, delivered a presentation that discussed the following questions: “What problems do LGBTQ+ in STEM face today?” and “Why is inclusion vital in STEM, and how can we encourage it?”

Hannah introduced the rationale for selecting LGBTQ+ as a target inclusivity cohort - lack of representation and disproportionate devaluation and marginalization inside and outside the workplace - and the shared objective of Korea_HS to combat forces against inclusivity in STEM. From a meta-analysis of literature, LGBTQ+ was reported with fewer career opportunities, insufficient resources, and uncomfortable whistleblowing compared to their non-LGBTQ+-identifying STEM peers.

Matthew introduced professional devaluation - demeaning of one’s contribution and sense of self - as a form of marginalization. She suggested that this builds de-incentivizing factors (e.g. dismissal from a job) that correlate to health issues, such as insomnia and depressive symptoms which present undeniable connections between social, mental, and physical health. Indeed, an identity-forced job quit is an unjustifiable loss of valuable intellectual assets amidst the era of rapid scientific development.

To expand current inclusivity efforts of “LGBTQ+ in STEM” to practical reality, we drafted a sponsorship (funding proposal) for education/inclusivity plans for “LGBTQ+ in STEM.” After consulting with Sam Han - general manager of Crimson Education - we were authorized to officially submit our funding proposal to Crimson Youth Fund (CYF), the philanthropic arm of Crimson Education providing students with resources to actualize projects to life and make lasting impacts on the community.

This document included 5 parts: (1) current demographics of “LGBTQ+ in STEM” and a necessity for social attention, (2) enumeration of the four mainstream inclusion plans suggested by Team Korea_HS, (3) specific methods (e.g. report hotline launching, resource hub design) to promoting education and inclusivity in reality, (4) calculation of funds required for establishment and terms/conditions to sustain investment, and (5) proposed impact of the funding.

By submitting this proposal to Crimson Youth Fund, Korea_HS will be continuing its journey to bringing such extensive plans to practical reality after iGEM. This allowed us to evade the common paradigm and actively seek methods that financially and realistically can be implemented (e.g. stickers, research funding) to enlighten the peculiar aspects of LGBTQ+ in Synthetic Biology and to integrate all minor efforts under a significant shared paradigm.

To target preschool to elementary school students, who often know little about inclusion or diversity and hence their significance, we created a 10 page booklet titled “All Are Welcome” regarding the two concepts. The mini-book, intended to be a child-friendly and entertaining mode of conveying the importance of diversity and inclusion to youth, included both illustrations and text created by Korea_HS members. The content of the mini-book largely centered around what diversity and inclusion mean, what roles they play in nature and scientific settings, and finally, what behaviors the children could adopt in and outside of the classroom to uphold the two crucial values. We intend to make this booklet available to the village schoolers of Chadwick International, whose online library makes student-produced work available for checkout by any student in the institution. We hope that this book can successfully ingrain values of inclusivity and sympathy in the minds of the young. 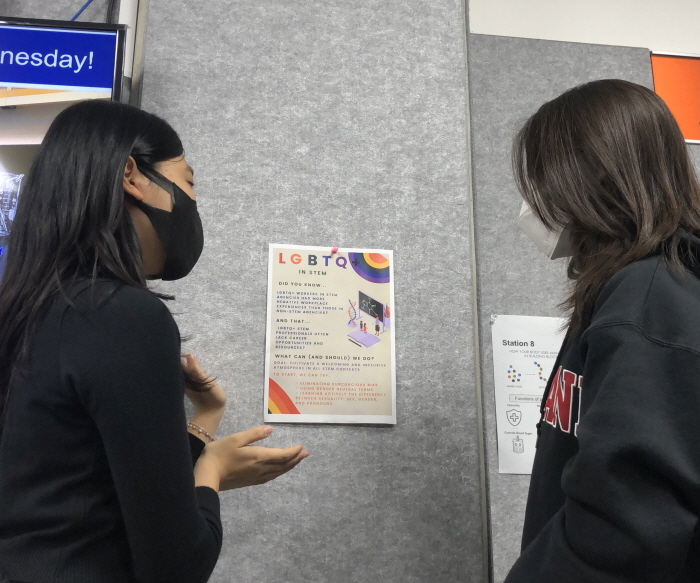 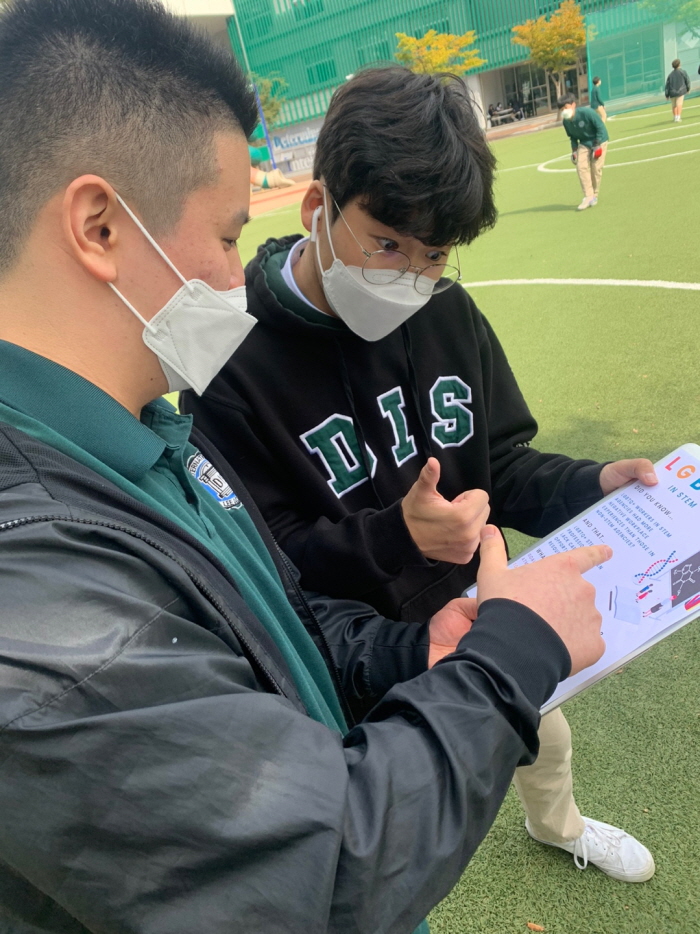 It often is understood that intution of Generation Z further expands to the global vision in the next few decades. As articulated under “Education,” we thoroughly scrutinized and advocated awareness of Synthetic Biology by directly approaching students of our contexts. Hence, to apply the same methodology for “LGBTQ+ in STEM,” we’ve created a poster that features the following hallmarks of the annual theme: negative workplace experiences in STEM (comparable to non-STEM agencies), lack of career opportunities and resources, and necessity of cultivating a welcoming and inclusive atmosphere in all STEM contexts (e.g. eliminating subconscious bias, using gender neutral terms, etc). This poster was printed and distributed en masse in Chadick International Songdo and Daegu Internatioal School, and Matthew and Hannah opened discussions with students from the sophomore grade either identifying with or supporting LGBTQ+, where open expressions and suggestions flowed.