Here we describe how proof of concept has been obtained throughout the project.

The aim of PsiloAid is to develop an efficient and sustainable way of producing the psychedelic psilocybin in E. coli to make it available for researchers as it shows great potential as a possible treatment towards depression. We took inspiration from the Sydney 2019 iGEM team and developed further on their idea of creating de novo synthesis of psilocybin from tryptophan. This synthesis consists of four enzymes: PsiD, PsiK, PsiM, and PsiH, which are naturally expressed in the fungi Psilocybe cubensis. Researchers have previously expressed the three enzymes PsiD, PsiK and PsiM in E. coli [1] allowing the psilocybin synthesis from the added precursor 4-hydroxy-indole. PsiH is a cytochrome P450 monooxygenase with a hydrophobic N-terminal, which is naturally associated with the endoplasmatic reticulum membrane, which is also true for its reductase, NADPH-cytochrome P450 reductase (CPR), which PsiH needs for efficient conversion of tryptamine to 4-hydroxytryptamine. Due to the hydrophobic N-terminals the expression in bacteria will most likely result in misfolded, inefficient proteins. Therefore, modifications of these N-terminals were designed in order to achieve an efficient PsiH and thereby allow De Novo synthesis of Psilocybin from tryptophan.

The different modification of N-terminals of the PsiH and CPR-enzymes are generally based on either substitution with entire N-terminals from other not membrane-associated enzymes, substitution of single bases to change amino acid sequence or deletion of the entire hydrophobic N-terminals.

During the process of introducing N-terminal modifications through overhang-PCR, the length of different PCR-products was controlled by gel-electrophoresis (see results page). The cloning of the modified PsiH or CPR into the plasmid with LacI and T7 Lac promoter system was controlled individually by colony-PCR with gene-specific primers (see examples on results page). The final triple transformants, which contain PsiH together with CPR and the PsiDKM-construct were screened through colony-PCR with gene specific primers to make sure they contained all three genes. Results of these PCR’s are shown in the picture below. The expected lengths are 5000 bp’s, 3800 bp’s and 3200 bp’s for PsiDKM, CPR and PsiH, respectively. 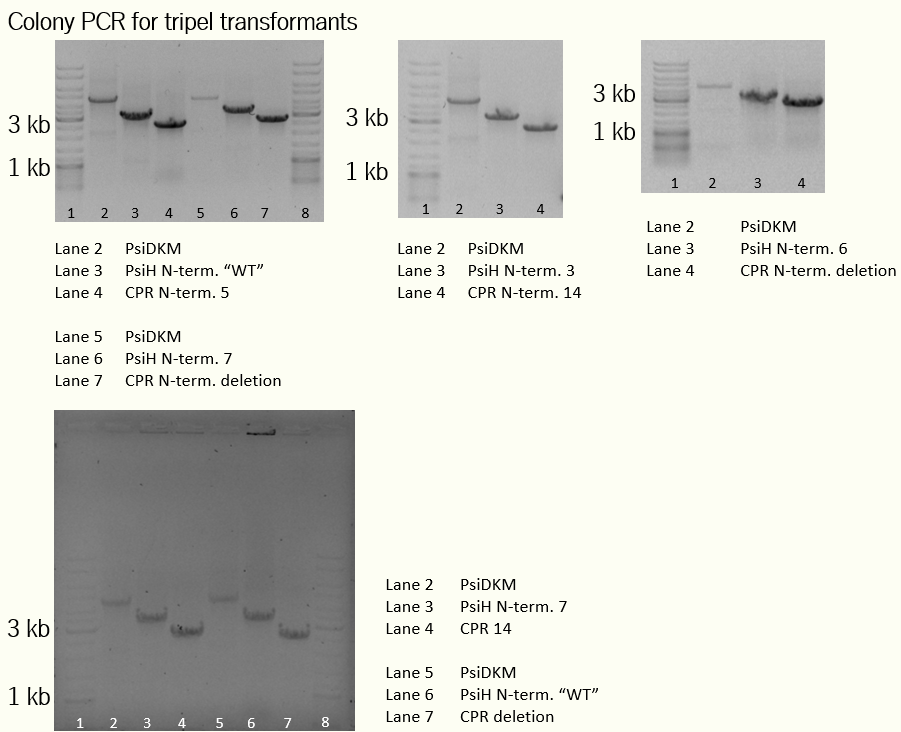 Figure 1: Shows the colony-PCR on triple transformants with gene specific primers for PsiDKM, CPR and PsiH (from left to right on each picture). BBa numbers for the parts are shown in table below.

To test the transcription of PsiH and CPR and whether it was induced by IPTG, RT-qPCR is performed for different N-terminal variants of the genes. The results show expression of all the tested enzyme-variants, however the pattern of induction was not exactly as expected for all variants, which is further explained on the results page. An example of induction is seen below, for the PsiH-enzyme with N-terminal modification number 7 (BBa_K4059043):

The validation of gene transcription in general was, however, enough to move on to testing the enzyme activity of PsiH, both alone and together with PsiD, PsiK and PsiM and CPR, by LC/MS.

We chose to use Liquid Chromatography-Mass Spectrometry to validate if our triplets consisting of PsiDKM+PsiH+CPR, the variants are shown in the table below, are able to produce psilocybin from the substrate tryptophane. Tryptophane is also produced naturally in E. coli, but we add this to hopefully increase the yield. When analysing the spectra, we found that six triplets contained the correct fragment ions located at m/z=202 and m/z=157. This indicates that the constructs are able to produce psilocybin when they are transformed into the E.coli strain ER2566. We did not notice a pattern regarding if the N-terminal modifications increase the amount of psilocybin produced. Unfortunately we are not able to quantify the amount of psilocybin produced by our constructs.

Figure 3: LC/MS result: The diagram indicates the arbitrary areas of the two fragment ions m/z=157(marked with orange) and m/z=202 (marked with yellow)

The main goal of PsiloAid is to de novo biosynthesise psilocybin in E. coli, to make psilocybin available for research. We created a functional construct containing all four enzymes needed to produce psilocybin. This was successfully transformed into E. colistrain ER2566 which resulted in our triplets. The triplets can produce psilocybin from tryptophan, and this was validated via LC/MS.