As analyzed in the exosome model overview, we created a genetic circuit, utilizing the CellDesigner v4.4 software, aiming to investigate the feasibility of our proposed implementation and develop an approach to tackle the "low transfection" problem the Wet Lab team encountered (Goal #3). We also used this Genetic Circuit Model in combination with the Exosome Production Model to to draw conclusions on the general functionality of our proposed implementation (Goal #4).

The genetic circuit consists of 5 parts, those being the Sensor, the Amplifier, the Effector, the Thresholder and the Repressor. Each part plays a key role in the function of the genetic circuit, and its inclusion is vital for it to work as intended.

The Sensor and the Amplifier, create and enhance the signal respectively, so that the Effector will be activated. At the same time the Thresholder and the Repressor keep the rest of the genes in check by forbidding their activation and/or stopping their production (“turning it off”) at will, through the Safety Switch, if need be.

You can find specific information on the exact function of each part in the Wet Lab section of our Wiki.

You can find our designed as .xml executable through CellDesigner, MatLab or anyother program that works with SBML in our github. 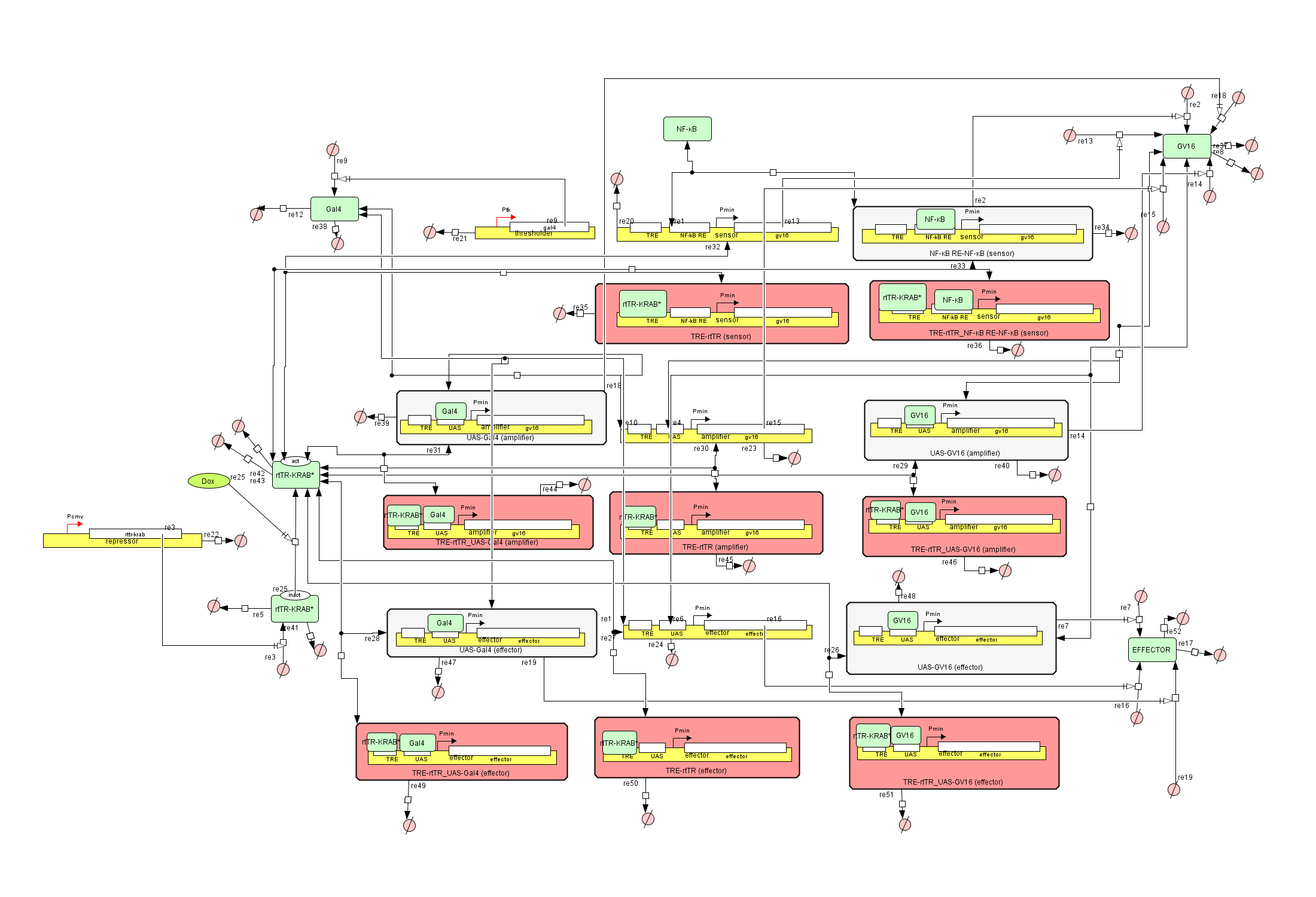 
At first glance the circuit might look intimidating, but it is composed of small simple parts, working together in harmony. Let’s take it step by step and explain how it works.

There are exactly 10 species used in the entirety of the circuit. Those are the above-mentioned genes, the NF-kB, Gal4-GV16, Gal4 and rtTR-KRAB proteins as well as the products of the Effector which can be anything.

The correct combination of a gene and a transcription factor enables the gene to be expressed and synthesize the corresponding protein. $$\small \frac{d[P]}{dt} = k_s * [TF-DNA]$$ where: $$ P = \;Protein\; product\; of\; the gene $$ $$ k_s = \;Protein \;synthesis \;constant$$ Complexes that contain the activated rtTR-KRAB* protein are considered inactive but have a small synthesis rate due to leaky protein production. $$\small \frac{d[P]}{dt} = k_l * [DNA]$$ where: $$ k_l = \;Leaky\; protein \;synthesis\; constant $$ The Thresholder and Repressor genes are not activated by a protein of the genetic circuit. They are constantly expressed utilizing transcription factors native to the cell, in order to maintain their restrictive function. Also, the product of the Repressor, the rtTR-KRAB protein, is in its inactivate state and can only be activated via the existence of the Doxycycline (Dox) in the cells environment. This interaction is described by the following equation: $$\small \frac{d[rtTR-KRAB^{*}]}{dt} = [rtTR-KRAB] * [Dox] * k_dox$$ where: $$k_dox =\; Doxycycline – rtTR-KRAB \;association\;constant$$ Finally, we have the degradation of the proteins into aminoacids (aa) and the disassembly of the gene array due to cell dilution. $$\small \frac{d[aa]}{dt} = [P]* k_{deg-p}$$ and $$\small \frac{d[lost]}{dt} = [Gene]* k_{dil}$$ where: $$k_{deg-p} =\; Degradation \;rate \;of \;a\;protein$$ $$k_{dil} = \;Dillution \;constant$$


During the development of the project, a problem occurred. We named the “low transfection” problem, because Mesenchymal Stem Cells are very difficult to transfect considering time, skills and resources. The fact that we needed to do so with 5 different plasmids didn’t help our situation.

Our solution was to create this model, to determine whether we could exclude some parts of it in order to reduce the number of plasmids while maintaining a significant amount of its functionality. In a different turn of events, we would use the simulations of the genetic circuit to demonstrate how this solution would function in close to real-life conditions and compare the results with the Wet Lab approach.


The first exclusion was to the amplifier construct. We ran the simulation in CellDesigner and MATLAB. 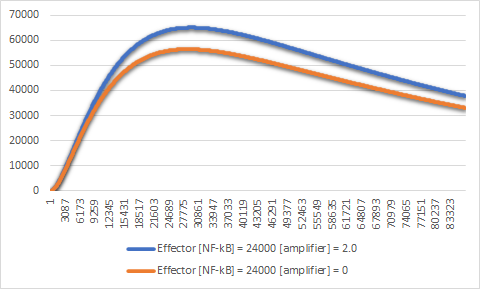 The exclusion of the amplifier construct reduces the expression of the effector by a significant amount (Figure 3). This small amount means that we can theoretically exclude it from the genetic circuit. But in order for this solution to work, we have to exclude at least one more plasmid.

The next construct we tested was that of the thresholder. 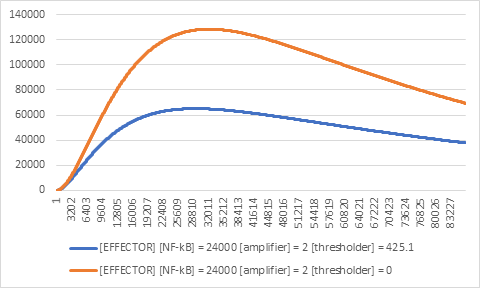 The results were like those of the exclusion of the amplifier construct, although in this case for a different reason. The fact that there is an increased expression of the effector construct (Figure 4), meant that if there was no NF-kB in the cells, we would have noticeable gene expression, therefore interfering with the wet lab results. 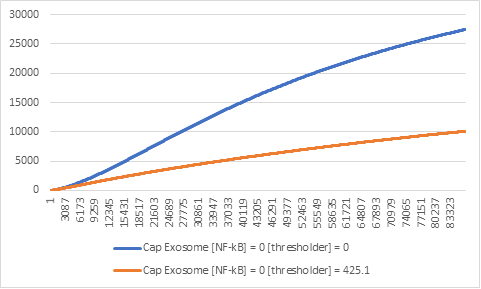 The absence of the thresholder construct can result in misleading results in the lab and uncontrollable expression (Figure 5). This comes in direct contrast with the reason we use the genetic circuit in the first place. Therefore, we concluded that its existence is necessary.

The same can be said for the repressor construct, whose exclusion would leave us unable to turn off the circuit entirely. 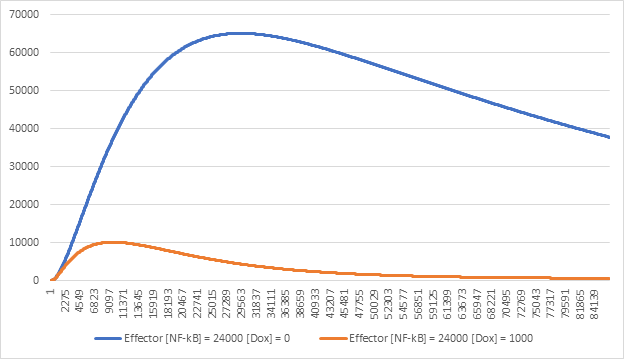 As we can see in Figure 6 the repressor construct has a very important role in the regulation of our circuit and its removal might prove to be more of an obstacle rather than a boost.

After careful thought and examination of our simulation results, we concluded that we cannot use less than 4 plasmid constructs and abandoned the lab experiment altogether. This is how the genetic circuit model contributed to the aid of the Wet Lab, as well as the construction of the hybrid model that combines the genetic circuit and the exosome production model, to test our idea from NF-kB to CAP-Exosome production.


In this table, you can find the general categories of the equations used to build our Genetic Circuit Model.


In this table, you can find the equations used to build our Genetic Circuit Model


In this table, you can find the parts (DNA, RNA, Proteins) used to build our Exosome Production Model.


In this table, you can find the values of the constants we used in the equations of the Exosome Production Model.

Since we were unable to conduct the necessary experiments in the wet lab, we decided to create a model to simulate it from start to finish.

We simply replaced the effector of the Genetic Circuit with the Exosome Model.

This way, the miRNA-140 carrying exosomes are produced when the cell is in an inflammatory environment, such the one of Osteoarthritis, via the NF-kB transcription factor.


To compare our results, we are going to measure the effects of different values on the production of exosomes. 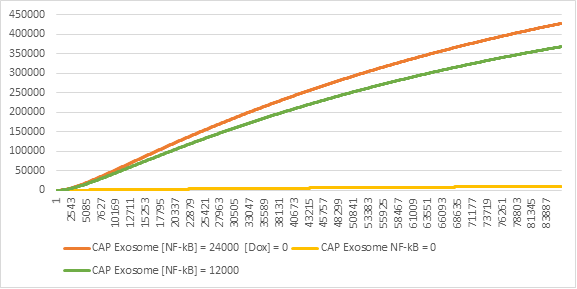 Having the Genetic Circuit as part of the exosome production, gives it the flexibility of activating only when necessary and according to the levels of NF-kB in the cell (Figure 8). This means that the production of exosomes is dynamic and reactive to the level of the inflammation, instead of constant and pro-active. 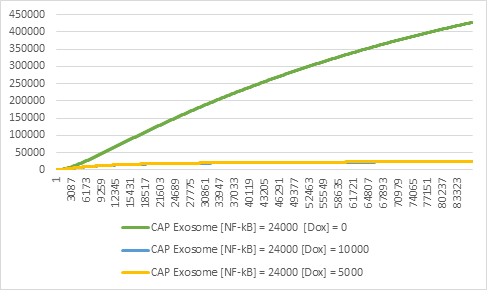 It is also important to note that the inclusion of the genetic circuit means that we can switch off the production of exosomes at any given moment (Figure 9), simply by inducing Doxycycline to the system. This is important, because it makes the system considerably more secure and allows for more complicated experiments to be conducted in the lab. 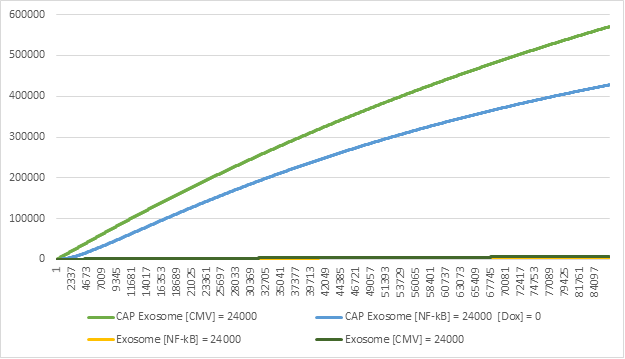 On the other side of the spectrum, we can see that the single plasmid transfected cell that utilizes the CMV promoter for constant expression produces a significant amount more exosomes (Figure 10). This is mostly since the genetic circuit is designed to be expressed under certain conditions and have control over the expression of the effector. It is also important to note that the difference between the two models is not significant enough to mark the genetic circuit as significant.

Although the genetic circuit model produces less CAP Exosomes, it provides safety measures and an adaptable dynamic expression system, both of which are crucial elements to designing a solution of Osteoarthritis with the aid of synthetic biology.


To create our models and calculate our results we used the software CellDesigner v4.4, as well as MATLABs SimBiology Model Builder and Model Analyzer, to validate our results. Both software's have a user interface that enables the user to create visual representation of the models (architecture of the model) and use equations to model their interactions. Then you can use the built-in simulator of CellDesigner v4.4 or MATLAB's SimBiology Model Analyzer to simulate the model.

More information on how these two pieces of software work, can be found in our educational page, where we have fully documented their functionality by creating two tutorials for beginners.