Depression is a serious problem nowadays around the world. Depression among the younger population, especially college students, is getting worse. In China, there was not enough attention on this issue. We would like to tackle this issue from two aspects: 1) promote the understanding of depression through iGEM human practice and 2) explore novel approaches to alleviate depression using synthetic biology. In our proposed implementation, we would like to focus on the second aspect.

Our project was inspired by studies showing that optogenetics can induce or reverse depression-related behaviors. That led us to think that what if there was a way to alleviate depression using light as the input signal. Using light to turn on the treatment of depression is much more humane compared to traditional ways of treating depression (such as antidepressants and electroconvulsive therapy). First, we need an optogenetic switch, which can be found in recent literature. Second, we need something to help with depression. We were brainstorming and searching for ways that could alleviate depression. A molecule called Gamma-aminobutyric acid (GABA) eventually showed up on our search radar. Gamma-aminobutyric acid (GABA) is a neurotransmitter that blocks impulses between nerve cells in the brain. As an important inhibitory neurotransmitter, it is involved in a variety of metabolic activities and has high physiological activity. Low levels of GABA may be linked to anxiety or mood disorders. Studies show that when GABA attaches to a protein in the brain known as a GABA receptor, it produces a calming effect. This can help with feelings of anxiety, stress, and fear. As a result of these properties, GABA has become a popular supplement in recent years. What's more, GABA is easy to synthesize. From bacteria to human beings, we all have enzymes that can catalyze the conversion of glutamate to GABA. In E. coli, that enzyme is called GadB.

In our biological circuit design, we want to use light to turn on an optogenetic switch which can then activate the downstream production of GadB. GadB then can catalyze the conversion of glutamate to GABA. To facilitate the release of GABA, whose transportation in and out of cells requires another protein called GadC, we incorporated a lysis gene φX174E to induce cell lysis. Our ideal implementation of the circuit would be to put it in probiotics. Patients can drink the yogurt containing these probiotics, then activate the circuit by sunbathing (Imagine one is sunbathing and eating tasty foods containing glutamates – the depression may already be alleviated before GABA is kicked in). 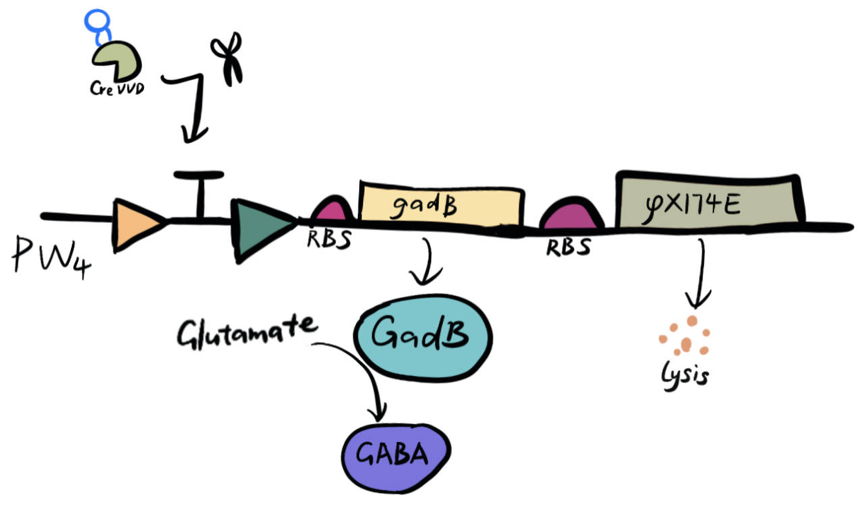 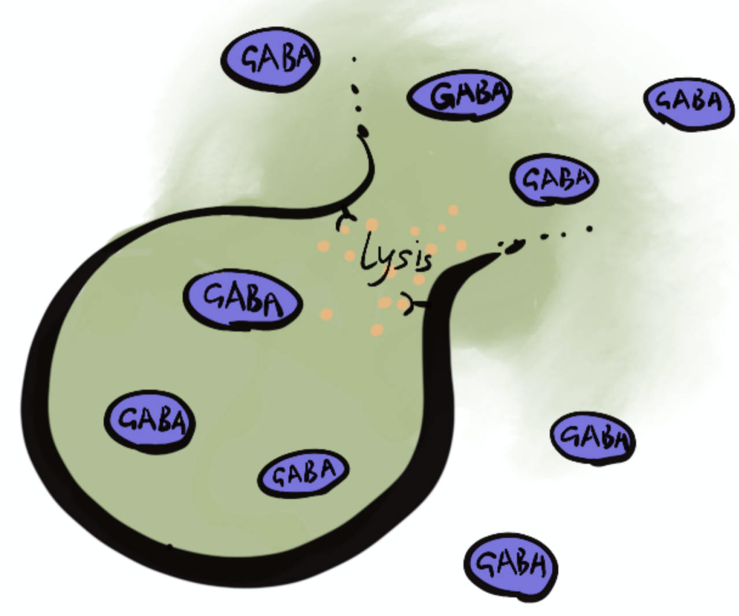 In the experimental phase, we will test our biological circuit in E. coli. There is a risk of spreading E. coli with antibiotic resistance into the environment. We will bleach the liquid media and cell cultures, and sterilize the plates before disposing of them to reduce the risk.

Our ideal implementation will involve transforming the circuit into probiotics. Probiotics generally do not pose harm to human beings and can be found in yogurts. Moreover, because our circuit contains a lysis gene to induce cell lysis and facilitate the release of intracellular GABA, modified probiotics will unlikely be a safety issue as they will be lysed and killed. We do need to investigate in vitro that how long it will take for all the engineered cells to lyse to make sure that no modified organisms can survive forever.