Depression is a common but serious mood disorder. Although there are treatments for depression, the possible adverse effects associated with antidepressant medication and the decline of treatments from patients can be problematic. Gamma-aminobutyric acid (GABA), as an important inhibitory neurotransmitter, has been shown to play a significant role in the regulation of mood disorders. Studies show that in healthy individuals, GABA-producing pathways are actively expressed in human gut microbiota. Based on these findings, we aim to engineer a dynamically controlled gut bacteria which can synthesize GABA to alleviate depression. We engineer a strain of E. coli to contain an optogenetic switch. When the switch is on, GadB (enzyme) and φX174E (lysis protein) can be made. GadB can catalyze the conversion of glutamate (which is abundant in foods) into GABA inside the cell. After the GABA concentration reaches a threshold, φX174E can lyse the cell and release GABA into the environment.

Do you know depression?

Depression is a mood disorder that causes a persistent feeling of sadness and loss of interest. Depression is one of the most common mental disorders in the world. Globally, more than 264 million people of all ages suffer from depression. Patients with depression may have feelings of sadness, emptiness, or anger. They may also experience sleep disturbances and anxiety, and may even have suicidal thoughts or conduct suicide in serious cases. In recent years, the number of people with depression in our country is increasing, especially the number of college students suffering from depression. Even though antidepressants may help with the symptoms by improving the way the brain uses certain chemicals that control mood or stress, they may have some unwanted side effects; furthermore, some patients might decline the treatment as they think they are not ill. Therefore, in this project, our team hopes to develop optogenetic switch-based gut bacteria supplementing gamma-aminobutyric acid (GABA) to provide a more acceptable approach to alleviate this disorder.

Gamma-aminobutyric acid (GABA) is a neurotransmitter that blocks impulses between nerve cells in the brain. As an important inhibitory neurotransmitter, it is involved in a variety of metabolic activities and has high physiological activity. Low levels of GABA may be linked to anxiety or mood disorders. Studies show that when GABA attaches to a protein in the brain known as a GABA receptor, it produces a calming effect. This can help with feelings of anxiety, stress, and fear. As a result of these properties, GABA has become a popular supplement in recent years. Some studies show that GABA in the bloodstream can enter the central nervous system. Also, a transcriptome analysis of human stool samples from healthy individuals showed that GABA-producing pathways are actively expressed in human gut microbiota. This leads us to think that gut bacteria producing GABA in the human gut environment might help alleviate depression symptoms. 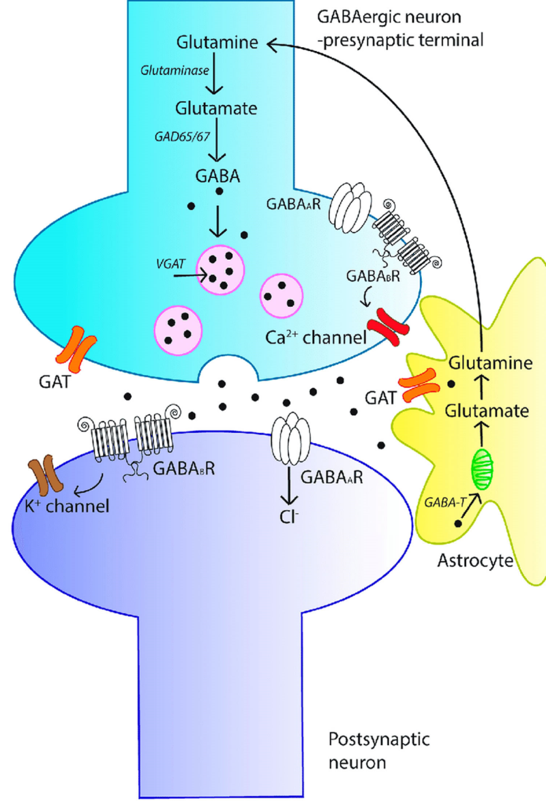 Our project was inspired by studies showing that optogenetics can induce or reverse depression-related behaviors. That led us to think that what if there was a way to alleviate depression by sunbathing… In our design, light can turn on an optogenetic switch which can then activate the downstream production of depression-alleviating molecules. The best implementation of such a biological circuit would be in gut bacteria. However, we are afraid that sunlight cannot penetrate the skin to activate bacteria in the gut. As a proof of concept, we want to add the luxCDABE system, which can generate blue light by itself, to replace sunlight as the internal light source. Our ultimate goal is still to find a way to turn on the circuit with sunlight directly (Imagine one is sunbathing and eating tasty foods containing glutamates – the depression may already be alleviated before GABA is produced).

LuxAB is a luciferase that can utilize the aldehyde made by LuxCDE to produce blue-green light. When exposed to blue light, VVDs change conformation to allow dimerization, which brings the Cre fragments together to make it an active recombinase. Cre recombinase then recognizes and excises DNA fragments flanked by two loxP sites. The excision eliminates the terminator placed 3’ of the promoter, so the following genes can be transcribed and translated into GadB and φX174E proteins. GadB catalyzes the conversion of glutamate to GABA. φX174E induces cell wall lysis to release intracellular GABAs into the human gut environment. 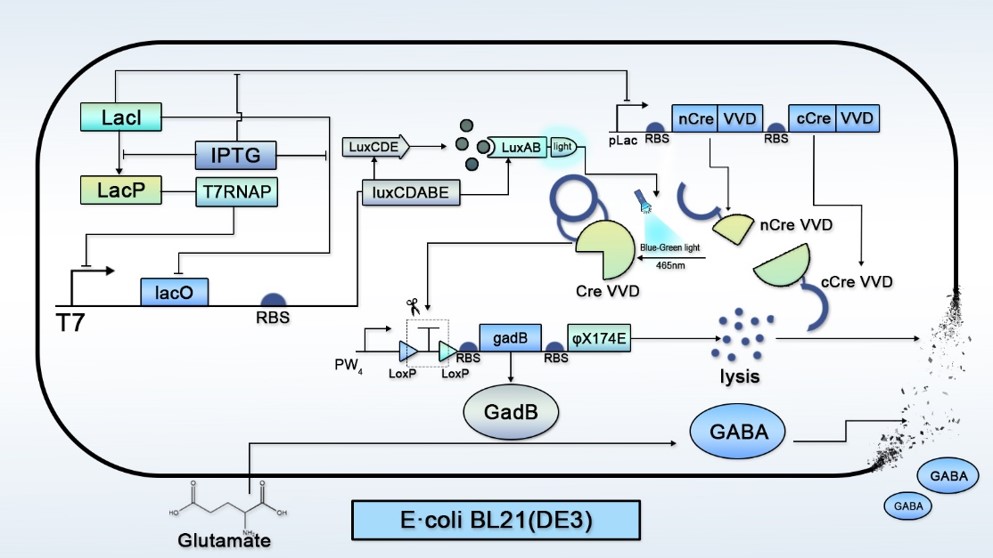 The luxCDABE operon of the bioluminescent bacterium Photorhabdus luminescens has proven to be a superb transcriptional reporter. It encodes a luciferase (LuxA and LuxB) and the enzymes that produce its substrate (LuxC, LuxD and LuxE), so cells that express the cluster emit the 490-nm light spontaneously.

VVD, a photosensitive protein, is derived from the fungus Neurospora crassa, and homodimerizes under blue light in 400-490nm and separates in the dark. Cre is a commonly used tyrosine recombinase from the P1 bacteriophage that excises DNA fragments flanked by LoxP sites (LoxP site: 5' - ATAACTTCGTATA - GCATACAT - TATACGAAGTTAT - 3'). To make Cre light sensitive, it is split into N-terminal (nCre) and C-terminal (cCre) fragments, with the Vvd monomer attached to the internal end of each fragment. When exposed to blue light, Vvd changes conformation to allow dimerization, bringing the Cre fragments together. So it can be activated to excise DNA flanked by loxP sites.

Glutamate decarboxylase or glutamic acid decarboxylase (GAD) is an enzyme that catalyzes the decarboxylation of glutamate to GABA and CO₂. GadC can ship extracellular glutamate into cytoplasm, where GadA and GadB catalyze the decarboxylation reaction, which consumes a hydrogen ion to produce GABA. GadC ships the produced GABA out of the cell. Our GABA-producing module consists of the enzyme GadB, which can catalyze the conversion of glutamate to GABA. This module follows the optogenetic switch module, where blue light-sensitive Cre-VVD can excise the terminators located 5’ of the gene gadB and start the transcription and translation of GadB. The goal of this part is to show that the enzyme GadB can produce GABA after adding the substrate, namely glutamate.

In order to make E. coli release GABA more effectively, we use φX174E to achieve cytolysis. Enterobacteria phage φX174 lysis protein E inhibits the translocase MraY activity, which catalyzes the synthesis of lipid I, a necessary step for the host cell wall biosynthesis. The goal of the lysis module is to make E. coli more efficient at releasing GABA, that is when GABA accumulates to a certain threshold concentration, cells will autolyze and release GABA into the extracellular environment. That threshold concentration is correlated with the concentration of the lysis protein ϕX174E. To achieve this, we design a bicistronic expression of gadB and ϕX174E. As both genes are regulated by the same promoter, the expressions of GadB and ϕX174E proteins are synchronized. Then GadB catalyzes the conversion of glutamate to GABA while the ϕX174E protein accumulates inside the cell. After the concentration of ϕX174E proteins reaches a certain threshold concentration, they will induce cell lysis, which will then release GABA into the extracellular environment.

Finally we will transform three plasmids (pACYCDuet-1-Chl-LuxCDABE，pBbS5a-nCre-Vvd-Vvd-cCre, and pET-30a-pT7-loxP-T-T-loxP-gadB-RBS-ϕX174E) into one E. coli cell. With the addition of IPTG, luxCDABE can generate blue-green light. Vvds dimerize and Cres form a complete enzyme. Then the active Cre excise the transcription terminators and the subsequent genes gadB and ϕX174E begin to be transcribed and translated into the GadB enzyme and a lysis protein. GadB catalyzes the conversion of glutamate to GABA. The lysis protein acts on the cell wall of E. coli and causes cell lysis. As a result, GABA is released into the gut environment. Because the lysis protein will not cause all the cells to lyse at once, there will always be some cells left that can multiply and keep this GABA cycle going.