Our biological circuit contains four modules: a light module, an optogenetic module, a GABA-producing module, and a lysis module. On this page, we demonstrated the engineering success of all these modules except the light module.

The light module contains light-generating genes luxCDABE under the control of a T7 promoter and a lac operator. This module is required for the current implementation of our engineered bacteria in the human gut environment. However, our ultimate goal would be to turn on the optogenetic switch by sunlight directly.

To construct the pACYCDuet-1-LuxCDABE plasmid, we first amplified the pACYCDuet-1-BsaⅠ backbone, pre-LuxCDABE-BsaⅠ and post-LuxCDABE-BsaⅠ with BsaⅠ restriction sites respectively. All fragments were then ligated using Golden Gate Assembly and transformed into DH5α to get the circular plasmid pACYCDuet-1-LuxCDABE. The band obtained by colony PCR was 6641 bp, indicating that the plasmid was successfully constructed. Then the plasmid was sequencing verified and transformed into E. coli BL21(DE3).

However, we failed to generate blue-green light with this construct. One possible reason for the lack of light with this module is that although LuxCDE can produce the substrates for LuxAB to generate light, there might not be enough of them for the luciferase to work; we will try to add extra n-decyl aldehyde to the system to provide more substrates in future experiments.

Meanwhile, this light module is necessary for our current implementation of the biological circuit; for our future implementation, this module could be removed as we expect to use sunlight to turn on the optogenetic switch.

Initially, we chose the v1-1-BsaI backbone to construct v1-1-pT7-loxP-T-T-loxP-sfGFP-T500. We cotransformed pBbS5a-nCre-Vvd-Vvd-cCre and v1-1-pT7-loxP-T-T-loxP-sfGFP-T500 plasmids into BL21(DE3) electro-competent cell to construct the Opto-Cre-Vvd system. We set up five experimental groups, where only ①③ should have signals. However, after adding IPTG, ①②③④ all showed green fluorescence, which was not what we expected.

At first, we suspected that the leaky expression of sfGFP was a result of a bad batch of BL21(DE3) competent cells. However, after trying a new batch of BL21(DE3) from Tiangen, the problem still existed. After discussing with our PI, we decided to change the backbone and add an operator (besides T7 promoter). And we replaced the v1-1-BsaⅠ backbone with pET30a-BsaⅠ backbone. In this new construct pET30a-pT7-lacO-loxP-T-T-loxP-sfGFP, the transcription of the sfGFP gene was more tightly controlled as there was an extra operator lacO and extra expression of LacI protein.

We then constructed pET30a-pT7-lacO-loxP-T-T-loxP-sfGFP and cotransformed pBbS5a-nCre-Vvd-Vvd-cCre and pET30a-pT7-lacO-loxP-T-T-loxP-sfGFP into BL21(DE3) to make a new Opto-Cre-Vvd system. To test whether the system could work or not, we set up five experimental groups (Figure 1) and measured the green fluorescence of them using a microplate reader. As we can see in Figure 2, cells that were cotransformed with both plasmids and received blue light showed a strong signal of green fluorescence, as strong as the positive control. In contrast, cells that were cotransformed with both plasmids and kept in dark showed a much lower signal. This indicated that blue light did activate the Cre-VVD system, which excised the terminators between two loxP sites and resulted in more sfGFP expression; however, it also meant that even without blue light, the Cre-VVD system could still form active dimers. Future work includes optimizing the Cre-VVD system and making it harder to form spontaneous dimers. Another curve representing cells that contained pET30a-pT7-lacO-loxP-T-T-loxP-sfGFP plasmid showed some expression of sfGFP, indicating that this plasmid itself had leaky expression. One thing we can do about this leakiness would be swapping the current terminators for even stronger terminators to prevent unwanted transcription from this construct before the Cre-VVD system comes to work.

After this experiment, we analyzed the length of the core region of the pET30a-pT7-lacO-loxP-T-T-loxP-sfGFP plasmid of these cells to verify the excision of terminators. We amplified the region from promoter to terminator using the first and second experimental groups as templates. We then ran a gel to check their sizes. As shown in Figure 3, lane 1 is the linear DNA amplified using cells that were cotransformed with both plasmids and received blue light, while lane 2 is the linear DNA amplified using cells that had both plasmids but were kept in dark. The linear DNA in Lane 2 is 1113 bp in size, indicating that the terminators between two loxP sites were still there; on the other hand, the linear DNA in Lane 1 is only 913 bp in size, suggesting that the terminator region were excised from the plasmid. Combining both fluorescence and gel results, we showed that the Cre-VVD system worked as expected. 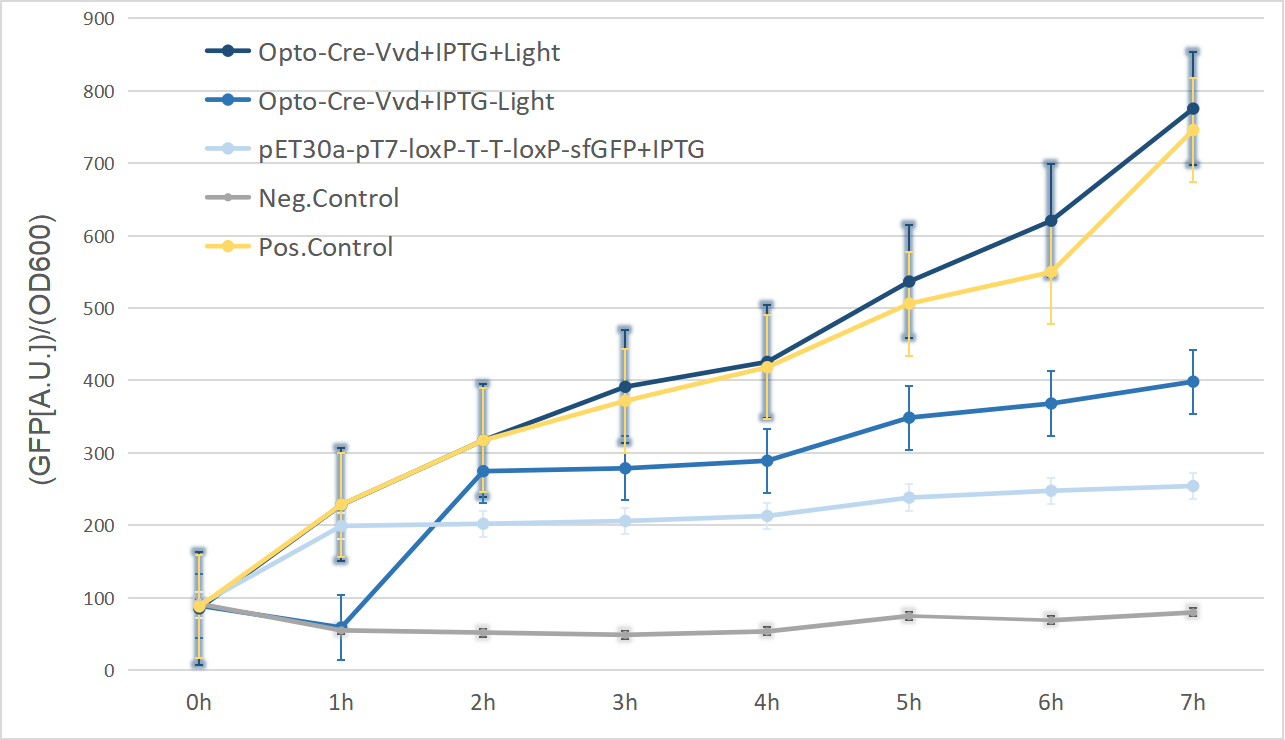 Figure 2. A time-course result showing the Cre-VVD system is working. 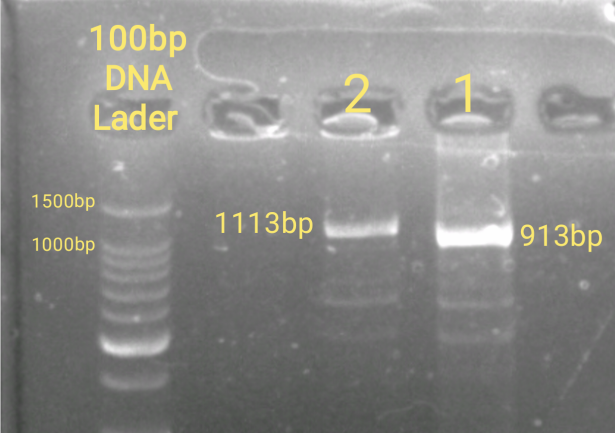 Our GABA-producing module consists of the enzyme GadB, which can catalyze the conversion of glutamate to GABA. This module follows the optogenetic switch module, where blue light-sensitive Cre-VVD can excise the terminators located 5’ of the gene gadB and start the transcription and translation of GadB. The goal of this part is to show that the enzyme GadB can produce GABA after adding glutamate. 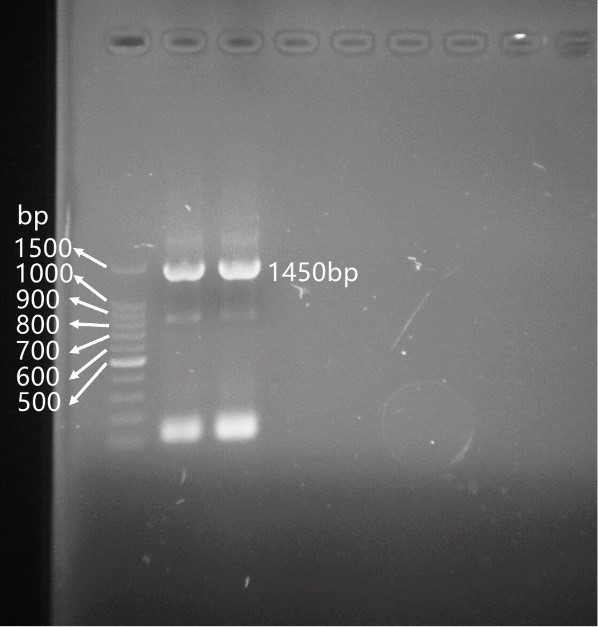 We obtained the plasmid backbone v1-1-pT7-RBS-T500-BsaI by PCR and used Golden Gate Assembly to ligate the backbone with the purified gadB-BsaI fragment to get the plasmid v1-1-T7-RBS-gadB-T500. The ligation product was then transformed into TOP10. We selected four single colonies (C11, C12, C13, C14) for colony PCR, and performed agar gel electrophoresis (Figure 5) on the PCR products of the colonies to see whether they contained our targeted plasmids. 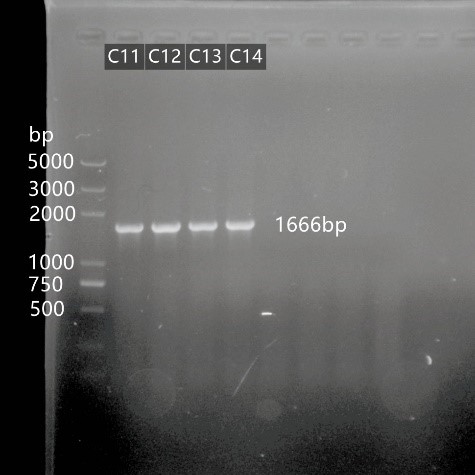 Figure 5. The colony PCR products have the expected length (1666bp), indicating the construct is successfully made.

Electrophoresis results show that the plasmids were successfully constructed. We then inoculate the colony C12 in a 5 mL tube and grew it overnight. We then mini-prepped the plasmid and sent it for sequencing. The sequencing results showed that the construct is correct. We transformed the plasmids into the expression strain BL21 (DE3), and we picked four colonies (numbered C21, C22, C23, C24) from the plate for colony PCR (Figure 6) 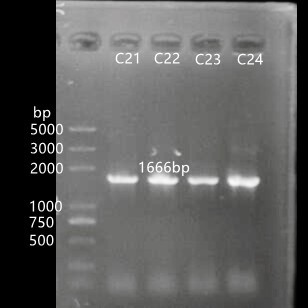 Figure 6. The colony PCR products shown in the figure all have the expected length (1666bp), indicating a successful transformation.

Based on the agar gel electrophoresis, we selected C21 for the next experiment. We inoculated C21 overnight. We then transferred 1% of the overnight culture to a 50 mL media. This was shaken at 37°C and 250 rpm for 3-4h until the OD600 value of the cell culture reached 0.6-0.8. Then IPTG (the final concentration is 100μM ) was added for overnight induction at 16°C and 200rpm. 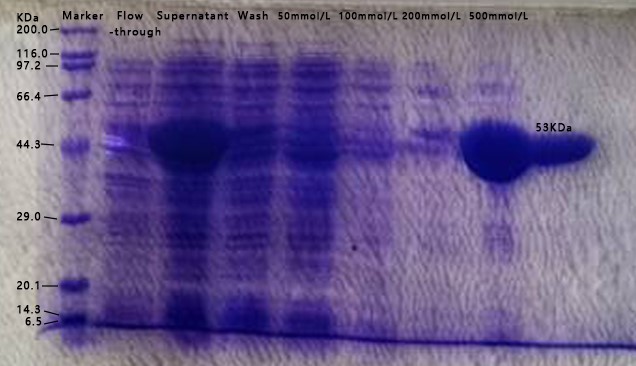 We centrifuged the cell culture to get cell pellets. Then we lysed the cells using a high-pressure cell disruptor and centrifuged again to collect the supernatant. We then purified the supernatant and eluted it with elution buffers containing a gradient of imidazole. We then took the flow-through solution, the supernatant, the wash solution, and elutions with different imidazole concentrations and ran a protein gel. As shown in Figure 7, a strong band about 53kDa showed up on the gel, indicating the successful expression of GadB protein.

Next, we tested whether GadB could catalyze the conversion of glutamate to GABA. Before doing that, we needed to develop a method to detect GABA. We referred to Berthelot's method for indirectly detecting GABA by detecting the OD630nm value of a derivative reagent. However, the reagents used in the Berthelot method were photosensitive and unstable. We then read more literature and found that 1-fluoro-2,4-dinitrobenzene (FDNB) can replace amino acids in a weak alkaline solution, producing a yellow compound dinitroxine benzodiazepines (DNP amino acids) which have an absorbance value at 485 nm. So we combined Berthelot's detection method with Yingguo L's derivation method to detect GABA. 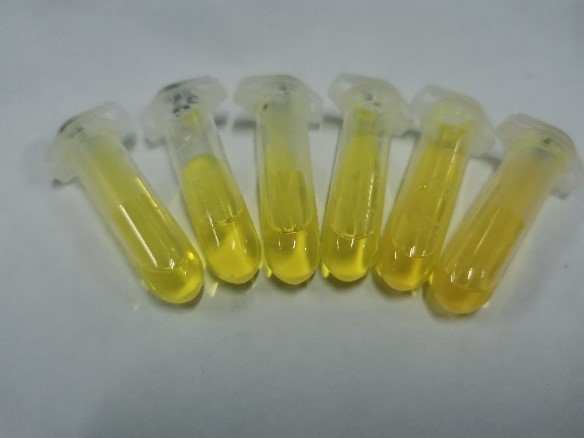 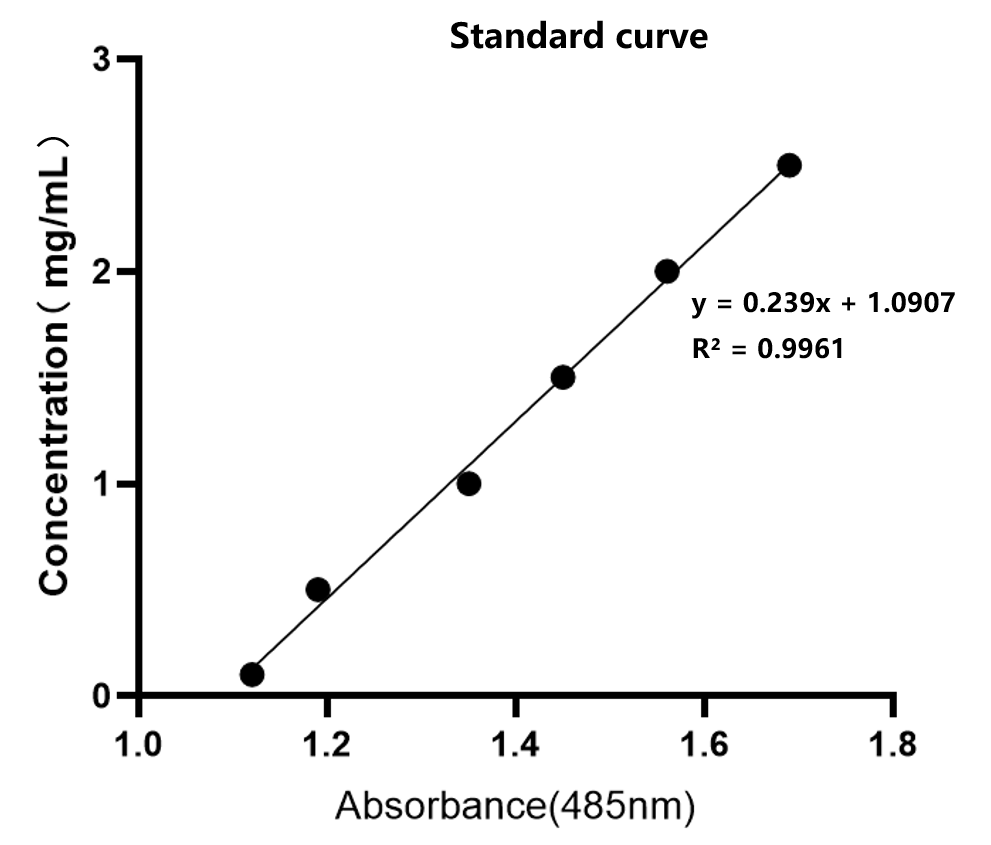 Figure 9. A standard curve of GABA measured at 485 nm.

The enzymatic reaction was conducted in a 2 mL reaction mixture consisting of 200 mM Na2HPO4-citric acid buffer (pH 4.0), 50 mM L-MSG, 0.01 mM PLP, and 50–100 μL of purified enzyme. 1-fluoro-2,4-dinitrobenzene (FDNB) was then added to the reaction. The mixtures were thoroughly mixed and incubated at 60°C for 1 hour. After cooling to room temperature, added PBS (0.02 mol/L, pH 7.0) to the mixtures to make a final volume of 10 mL. Then we measured the absorbance at 485 nm. The result was shown in Figure 10, indicating that GABA was indeed generated in the reaction and the function of gadB was as expected. 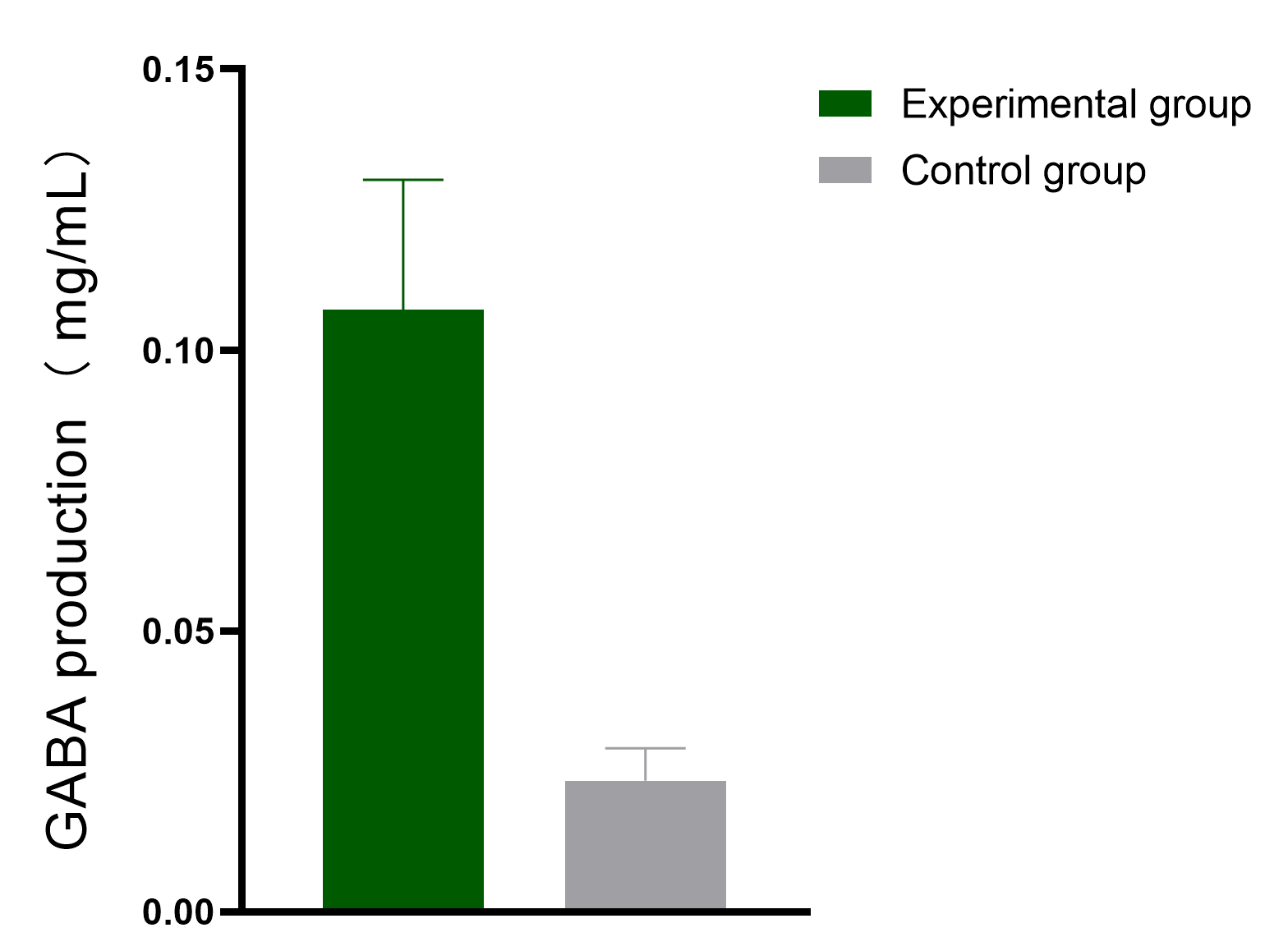 This module has been demonstrated to work as expected and the results are shown in Contribution.