The ViruGuard consists of several parts which carries different aspects of our design. 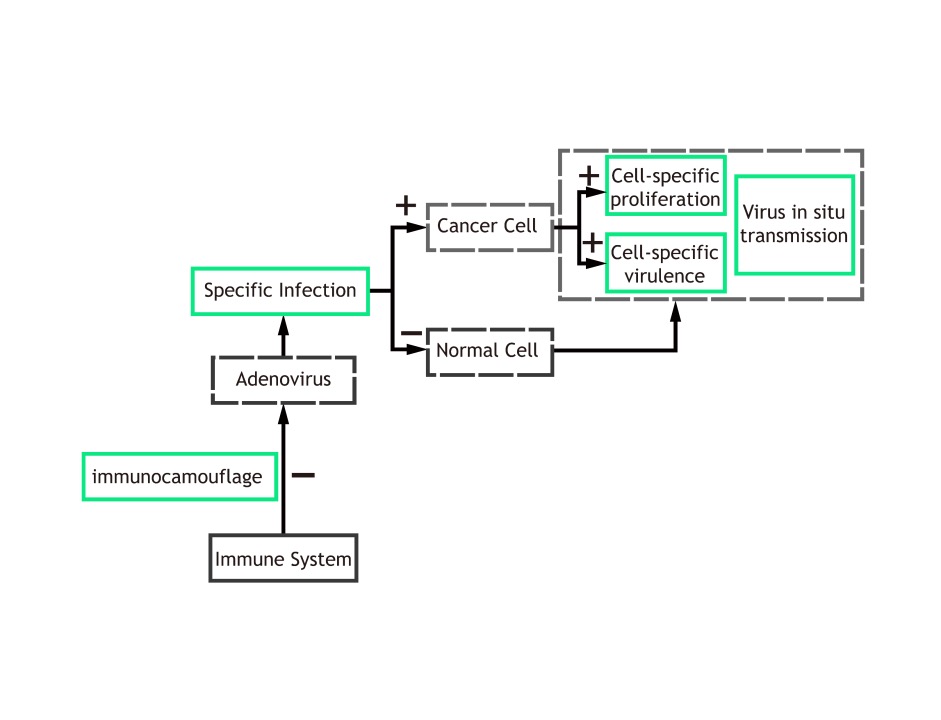 Figure.1 An overview to the project design.

The virulence to the cancer cell is realized by RNAi mechanism. Several shRNAs which specifically target survival-related genes VEGFA and hTERT will play a role in suppressing the proliferation of the tumor. In addition, knockdown of VEGFA can reduce angiogenesis and extracellular matrix synthesis in tumors, so as to enhance the transmission of virus in tumors and exert greater virulence.


Besides, we also use the TLR9 interference sequence to realize immune camouflage to avoid early clearance to the virus by the immune system.


We were concerned about the safety and specificity of our product, so we have made some designs in different stages in the whole process. In the infection stage, we use GPC3-fiber fusion protein for better cancer cell recognition. In the virulence stage, we used tumor-specific promoters and tumor-low-expressed miRNAs to ensure that the essential gene E1A for virus survival can only be expressed in cancer cells at the transcription and translation levels, respectively, to restrict virulence only to the cancer cell.


Besides, we have designed a special sequence called 'miRNA sponge' to avoid the possible debasement of virulence caused by our security insurance. Moreover, the in-situ diffusion of the virus due to the massive replication of the virus in the tumor region will further enhance virulence.


The very first step for an immune cell to recognize adenovirus and start the following immune behavior is the interconnection between TLR9 receptor on the surface of immune cells and the specific CpG sequence in the virus genome. Toll-like receptor (TLR9) can recognize the DNA of pathogenic viruses and bacteria, which contains unmethylated cytosine guanine phosphate (CpG) sequence. The combination of CpG and TLR9 promotes its dimerization and activates TLR9 signal through signal ligand MyD88 to produce interferons (IFNs) and pro-inflammatory cytokines, triggering the immune response, and eliminating foreign antigens. The mechanism protects our health in daily life while it's bad for Viruguard in this situation, so we had to find a way to reduce its function temporarily. 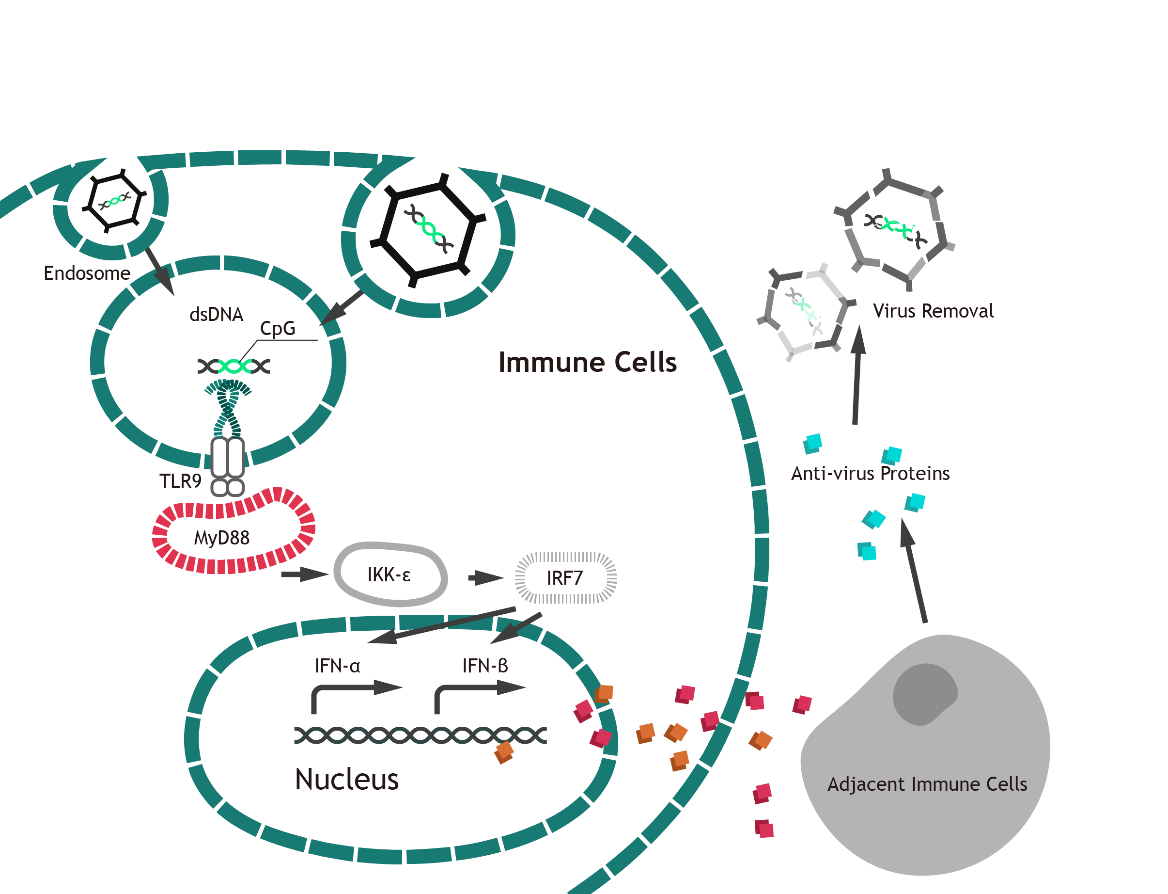 Luckily, a recent study has shown that the DNA sequence TLR9i (TLR9 interference) can be used to interfere with the function of TLR9 receptor (The binding site of TLR9i oligonucleotide on TLR9 partially overlaps with CpG DNA, and the binding affinity to TLR9 is higher than CpG DNA. The stem-ring structure formed by TLR9i oligonucleotide is tightly embedded into the TLR9 ring structure to prevent the dimerization and activation of TLR9. By inserting TLR9i sequence into Ad5 genome, when it coexists with CpG sequence, TLR9i will competitively bind to TLR9. TLR9i sequence has stronger TLR9-binding affinity than CpG sequence, and it will not lead to TLR9 receptor activation when it binds to the receptor. In this way, the immune system would reduce the early clearance of immune system to the virus. This ensures that the virus can successfully enter the cancer cells later. 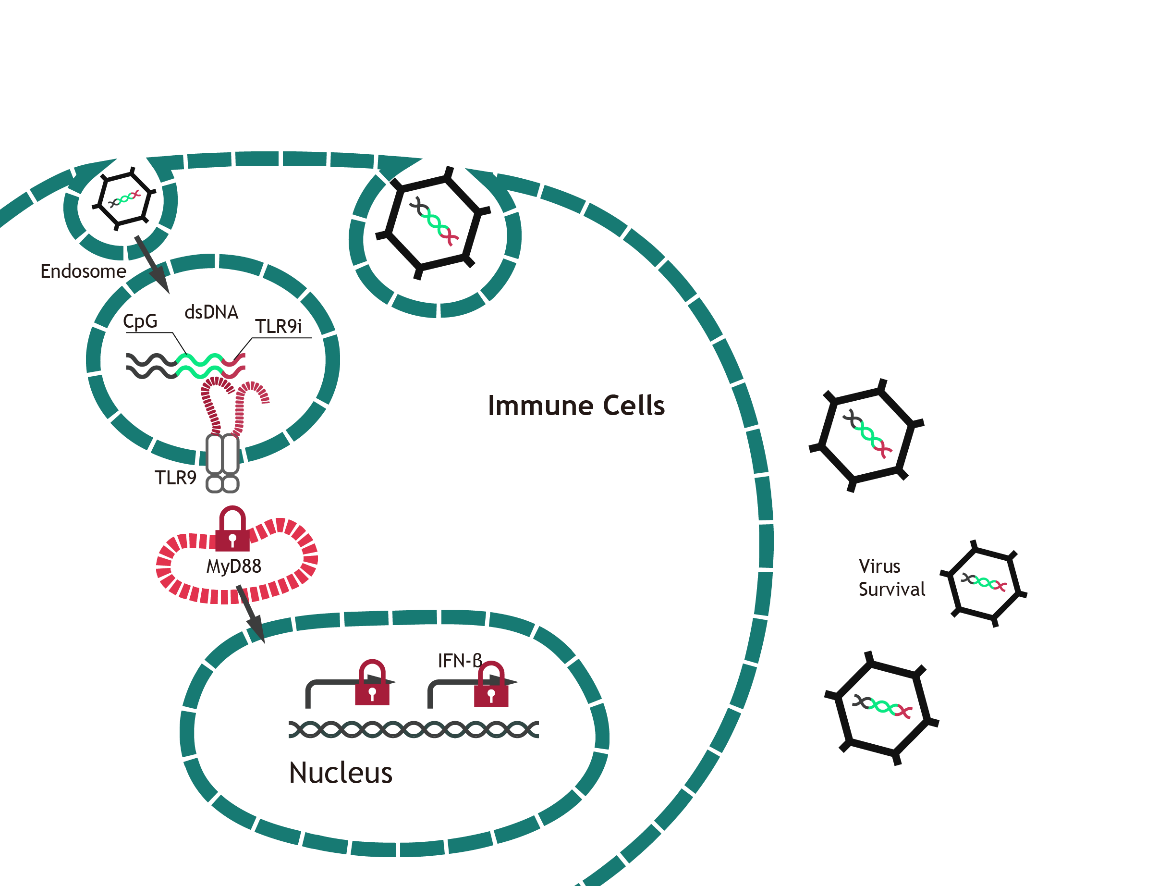 Figure.3 The insertion of TLR9i sequence to the virus genome.

However, comparing tumor cells with normal cells, the expression of CAR in tumor cells is lower than that in normal cells, resulting in adenovirus more inclined to attach to and infect normal cells, which is one of the reasons for severe side effects and low specificity of conventional oncolytic virus therapies. In HCC that we studied, there is a specially expressed receptor GPC3 on the surface of liver cancer cells, which does not exist on the surface of normal cells. By fusing the fiber of adenovirus with anti-GPC3 scFv, which can combine the HCC cells specifically expressed receptor GPC3, the possibility of virus binding to normal cells is significantly reduced and the possibility of virus binding to liver cancer cells is increased. Therefore, anti-GPC3 scfv can not only increase the safety by limiting the process of CAR in normal cells combining virus, but also improve specificity and efficiency of The ViruGuard's infection. 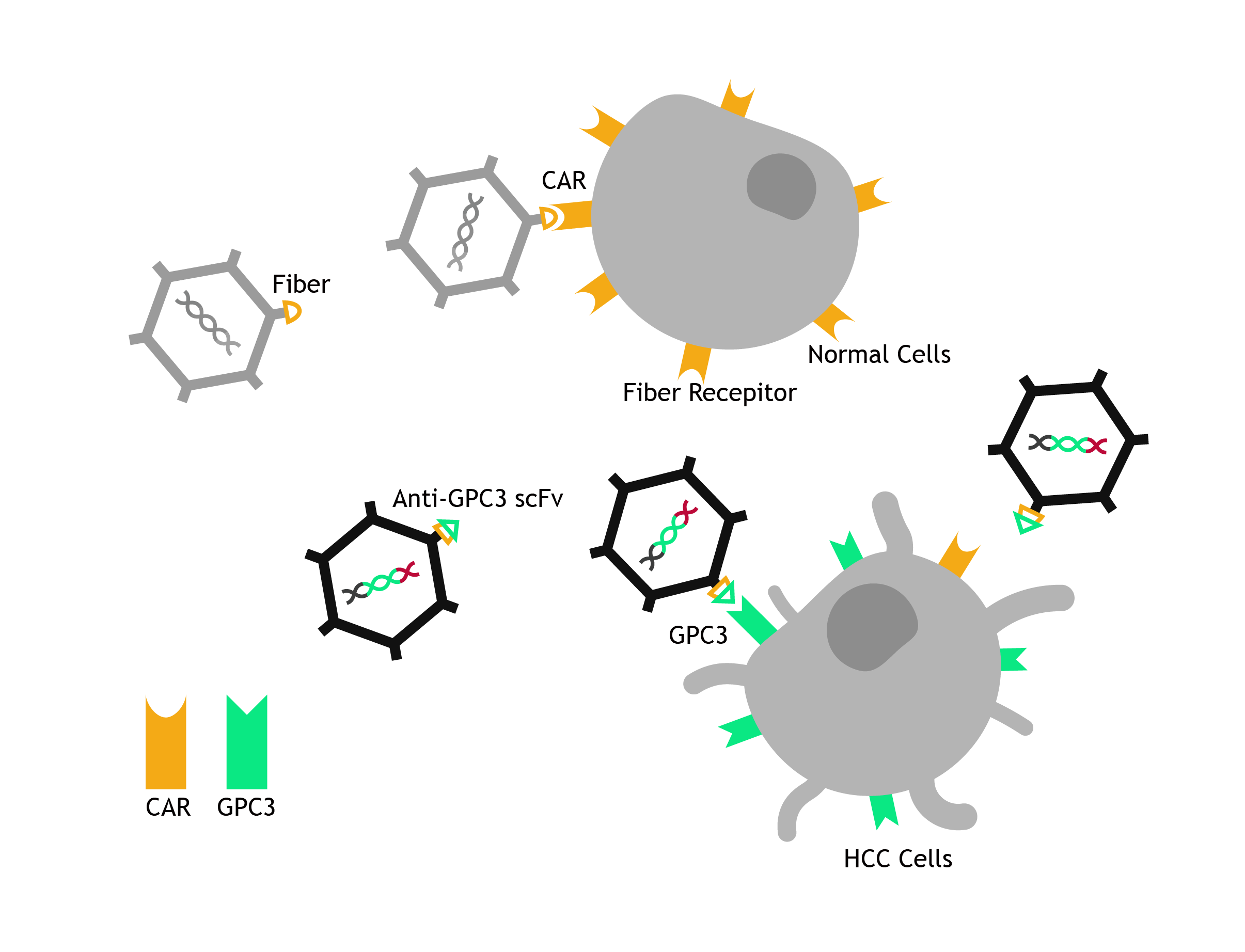 There are specific miRNA expression differences between normal cells and tumor cells. In our design, this miRNA level difference will be used to regulate the fate of the virus genome after entering the cell. We hoped to use this difference to monitor the specific replication of virus in tumor cells and reduce virus proliferation and viability in normal cells by controlling the expression of virus key protein. 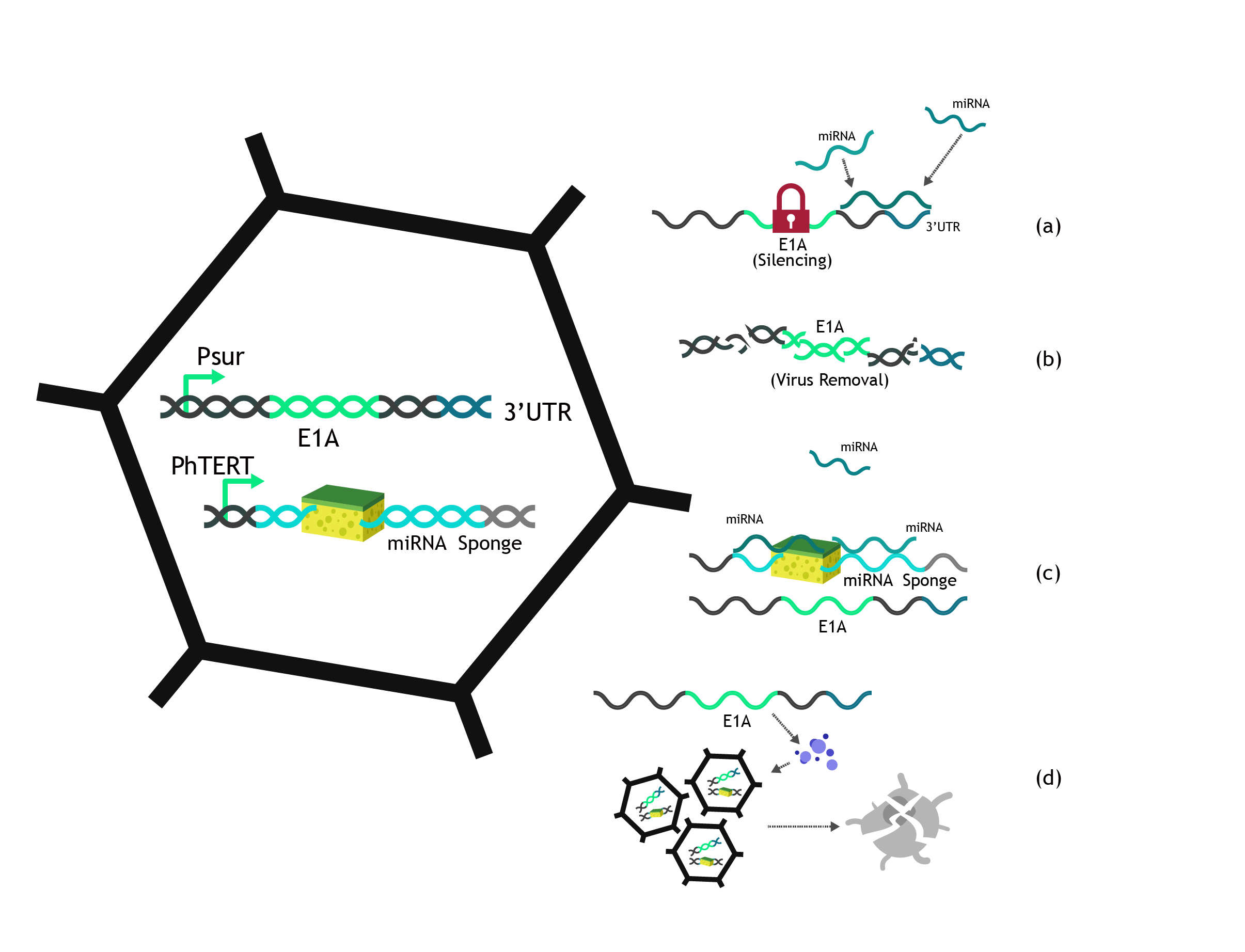 Figure.6 miRNA induced suicide switch and miRNA sponge mechanism. (a,b) In normal cells, the E1A gene will be silenced and the survival of the virus will be suppressed. Therefore, the virulence to the normal cell will be reduced. (c,d) In cancer cells, miRNA sponge will be expressed under the control of a tumor-specific promoter. The sponge will absorb the miRNA. E1A gene will stay normal. The oncolytic virulence will make effect to inhibit cancer cell growth.

We chose three different miRNAs as our switch to control the survival of virus: miRNA 199a,195 and 22 which expressed higher in normal cells than in tumor cells. By inserting the complementary sequence of those high expressed miRNAs into the 3' UTR of E1A. E1A is an essential gene for virus survival and the combination of the free miRNAs and their complementary sequence in 3'UTR of the gene would lead to silence, inhibiting the proliferation of the virus. In tumor cells, due to the lower expression of those miRNAs, it has little effect on virus viability.

To reduce the inhibitory effect of free miRNA silencing mechanism on the oncolytic virus in cancer cells, we designed a special sequence called 'miRNA sponge', which is composed of a series of tandem complementary sequences of miRNA 199a, 195 and 22. The mRNA transcribed by it can reduce the level of free miRNA mentioned above through complementary binding, which limits the ability of these kinds of free miRNAs to bind to the target position of the oncolytic virus E1A gene. To ensure that this mechanism will not affect the virus silencing mechanism in normal cells, we use the tumor-specific promoter hTERT to regulate its transcription. In normal cells, the expression of miRNA sponge is comparatively low so that the miRNA in normal cells can remain in an effective concentration. 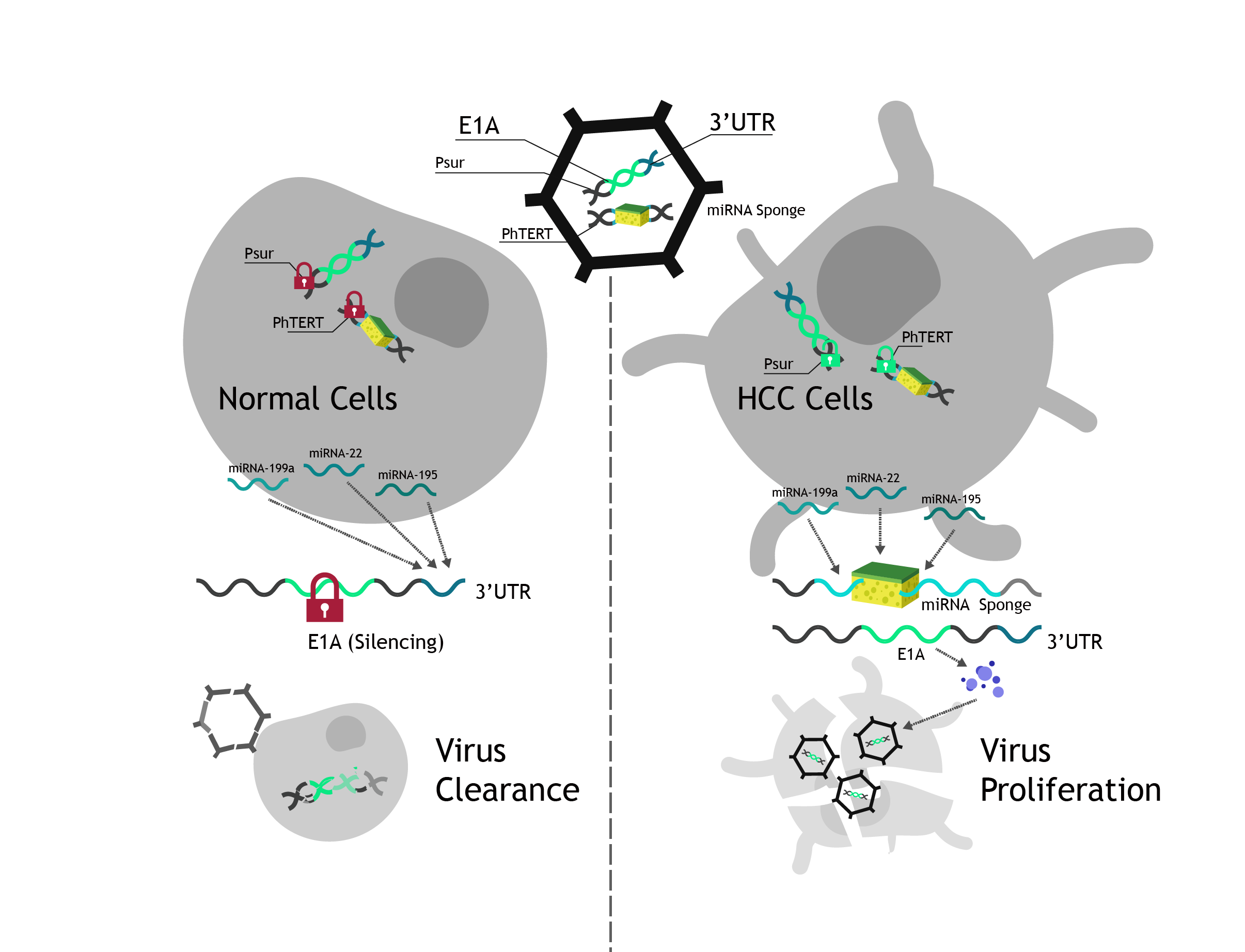 The killing effect of viruses on tumor cells is realized by RNAi. We focused on interfering with two genes closely related to tumor survival: VEGFA and hTERT.

The former gene carries the ability to produce vascular epidermal growth factor, which is widely expressed in cells and highly expressed in tumor cells. Its expression allows blood vessels formation around the tumor to provide fresh blood for its growth, which is one of the most important sources of exogenous factors necessary for tumor growth. Therefore, the knockdown of VEGFA means starving tumor cells. In addition, since the dense vascular system and the existence of collagen bundles in extracellular matrix ECM in the tumor will hinder the further transmission of the virus in the tumor, our siRNA targeting VEGFA can effectively reduce tumor angiogenesis and extracellular matrix synthesis, so as to enhance the transmission of the virus in the tumor.

The latter protein is only expressed in malignant tumors and human embryos. It is a telomere reverse transcriptase gene, which can reduce or even eliminate the telomere shortening caused by cell division and ensure the unlimited proliferation of tumor cells. Therefore, knockdown of hTERT means weakening the replication capability of cancer cells.

By integrating shRNA targeting the two proteins into the virus genome, shRNA will be processed into mature siRNA complex to achieve gene silencing after a series of nuclear processing.

Because the shRNA designed by us targets VEGFA, which is a widely existed gene in many types of cells, its safety needs to be guaranteed. We use tumor cell specific promoter to regulate its action. hTERT and survivin promoters are selected as the candidates. Their transcriptional initiation efficiency is low in normal cells but high in tumor cells. 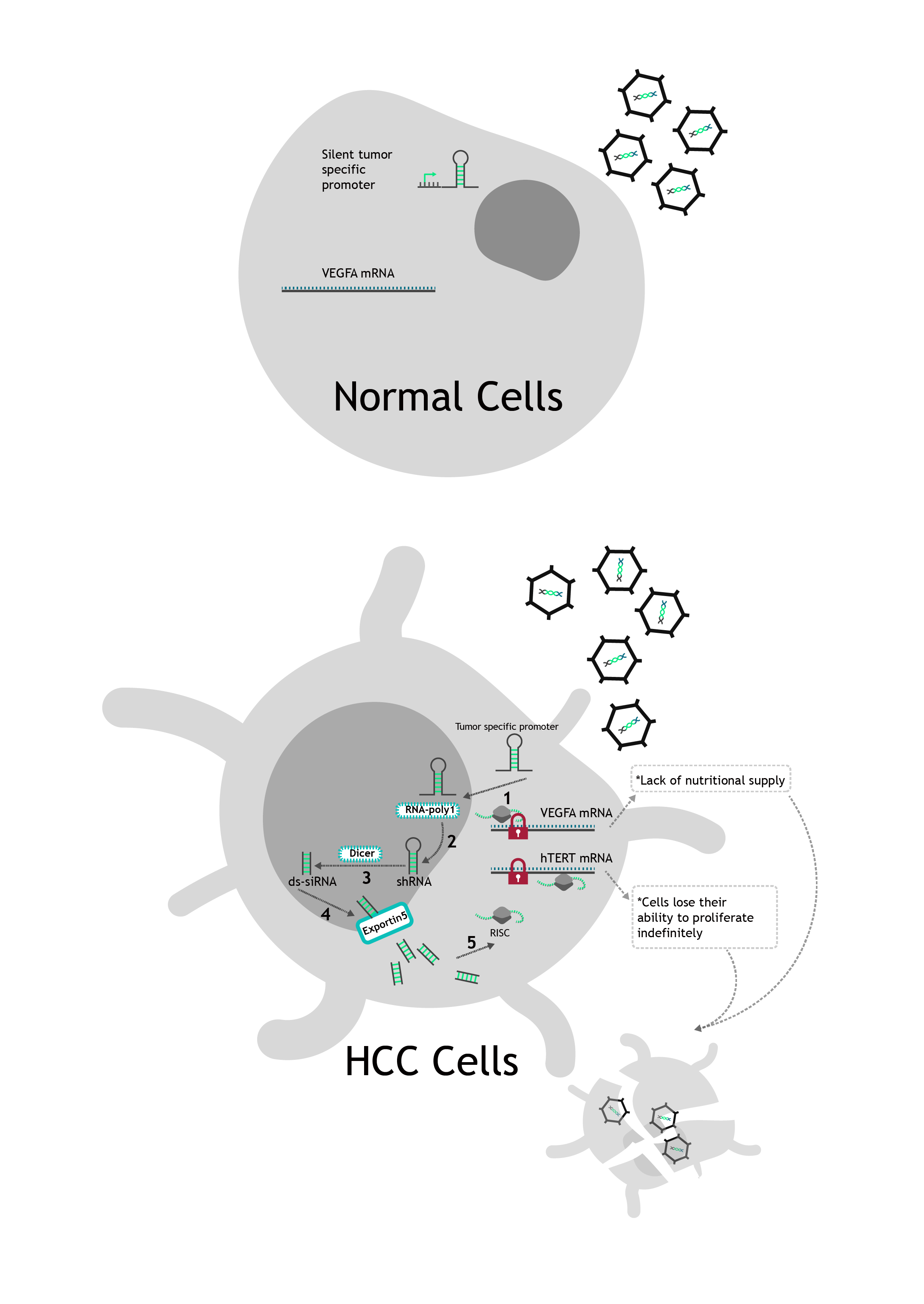 When the oncolytic virus successfully lyses the cell, new virus is produced to continue to make the function. Since the tumor hasn't metastasized yet, the virus will gradually spread from our injection site to the surrounding cancer tissue to achieve in-situ clearance, so as to prolong the action time and enhance the effect. The high recognition ability and targeting of the virus can fully kill tumor cells and reduce the possibility of subsequent recurrence. 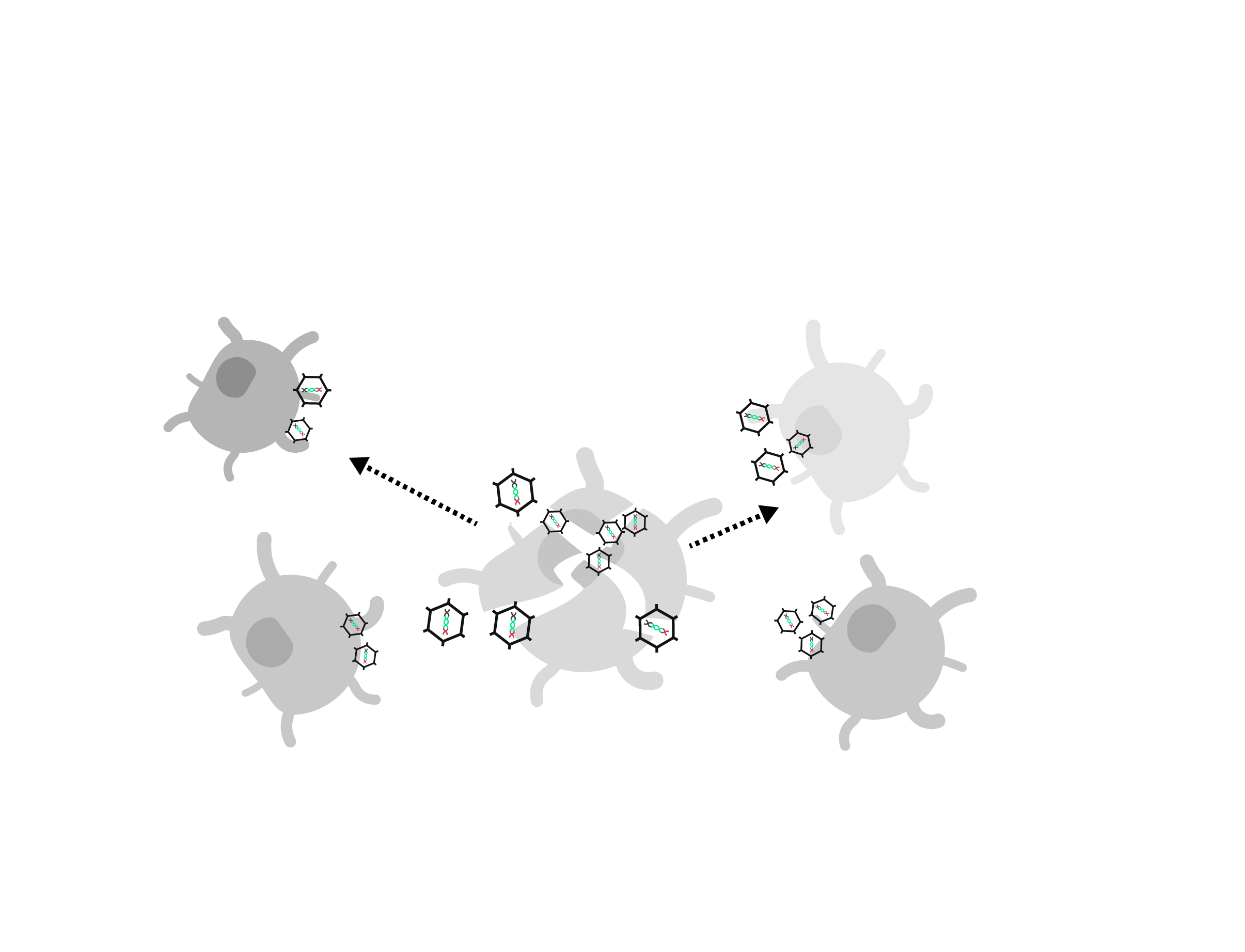 Now we have offered a complete set of solutions to solve the various problems which hamper the current oncolytic virus therapy development, including early clearance by the immune system, low affinity to tumor cells and etc. We have made it to realize some quite meaningful improvement to oncolytic virus development including immunoclearance for more efficient virulence, modified fiber protein for tumor cell-specific infection, the combination of miRNA suicide switch and miRNA sponge for the specific proliferation of virus in cancer cells and RNAi killing mechanism for low-dose but high efficient clearance of cancer cells. 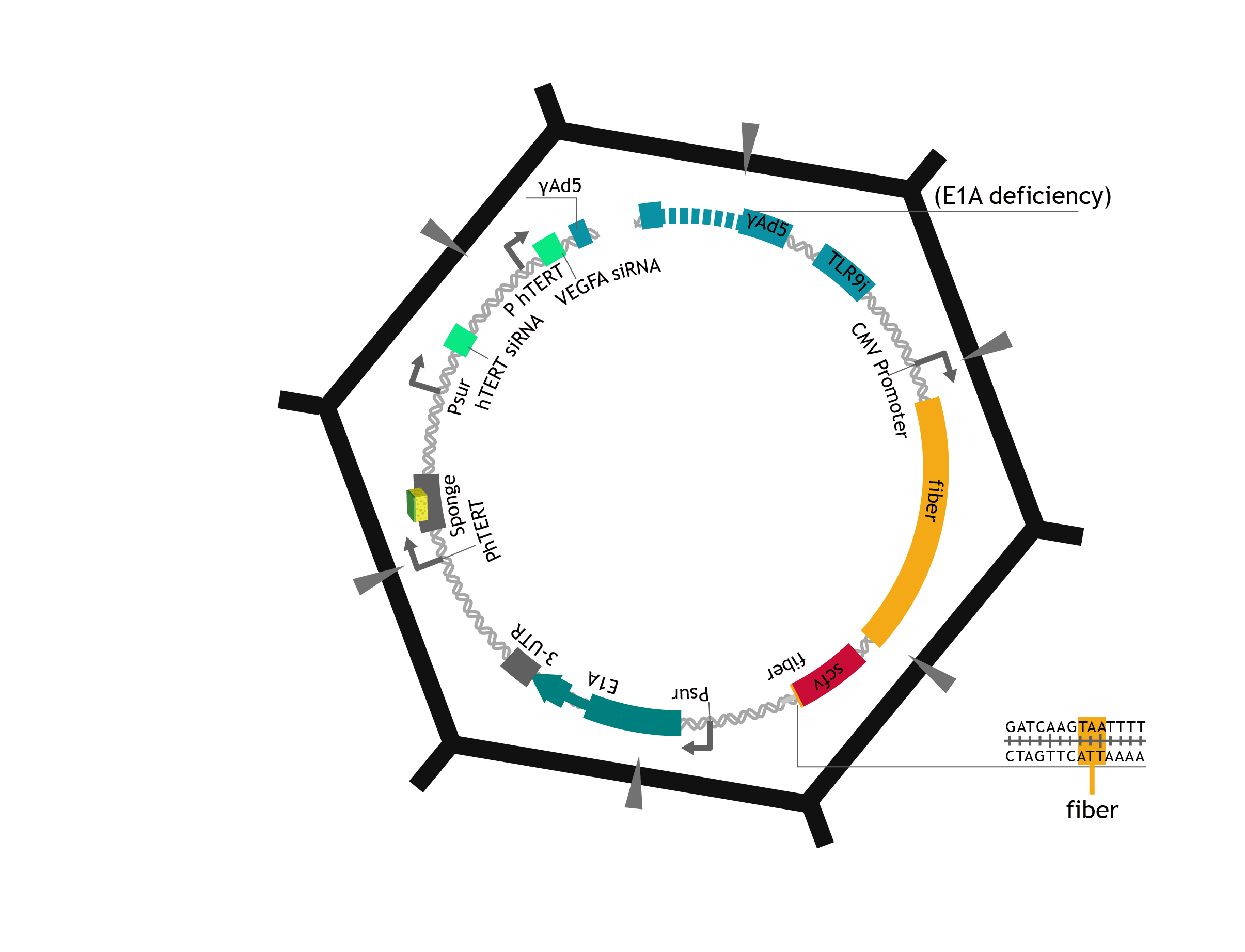