Metal-sensitive promotors are typically regulated by a receptor protein that binds to the metal ion or complex [1]. Such promotors are important to develop whole-cell bacterial bioreporters for heavy metals [2, 3]. Compare to chemical and physical methodologies, whole-cell-based monitoring with metal-sensitive promotors is easily applicable and inexpensive [2]. Consequently, these promotors have a bright future in both detecting metal pollutant and used for fine-scale design of cell-based circuit (e.g. bio-calculator, painting, cell-level battle games, etc.).

Despite the importance of metal-sensitive promotors, excess heavy metal is toxic in all its forms to many bacterial cells [4]. A trade-off between high concentration of heavy metals for metal-sensitive promotors and low concentration to avoid growth inhibition of sensor cells needs to be considered. In order to solve this paradox, T7 promotor can be used to improve the overall sensitivity of sensor cells to metal ions. The bacteriophage T7 promotor, with the corresponding T7 RNA polymerase (T7RNAP), is widely used in bacteria [5, 6]. In the presence of small molecule inducer, such as isopropyl β-D-1-thiogalactopyranoside (IPTG), this orthogonal system can achieve high levels of protein production [6, 7].

In the present study, we introduced T7 promotor to improve the expression efficiency of a cobalt-sensitive promoter – rcn (BBa_K540001) [8]. It was described by team iGEM11_LYON-Biosciences_INSA_ENS that this promotor was responsive to both Co2+ and Ni2+. The RcnR repressor binds to the promoter in the absence of Co2+. When sufficient Co2+ molecules accumulate in the cell cytoplasm, the cobalt ions bind to the RcnR repressor and prevent its attachment to the rcn promoter. We have done comprehensive measurements about Prcn, about its ion-specificity and its dose-dependent and time-dependent response to Co2+. For the results and other details, see our Contribution and Measurement page.

Owing to that the length of T7 promoter is only 19 bp, we directly included its sequence in our designed primers and constructed the new vector via simple one-step recombination based on the plasmid (BBa_K540001_pSB1C3) we used in measurements. We transformed the recombinants containing sPrcn to E.coli DH5α for screening, and then picked positive clones to extract plasmids, which would be later transformed into E.coli BL21(DE3) for subsequent experiments. 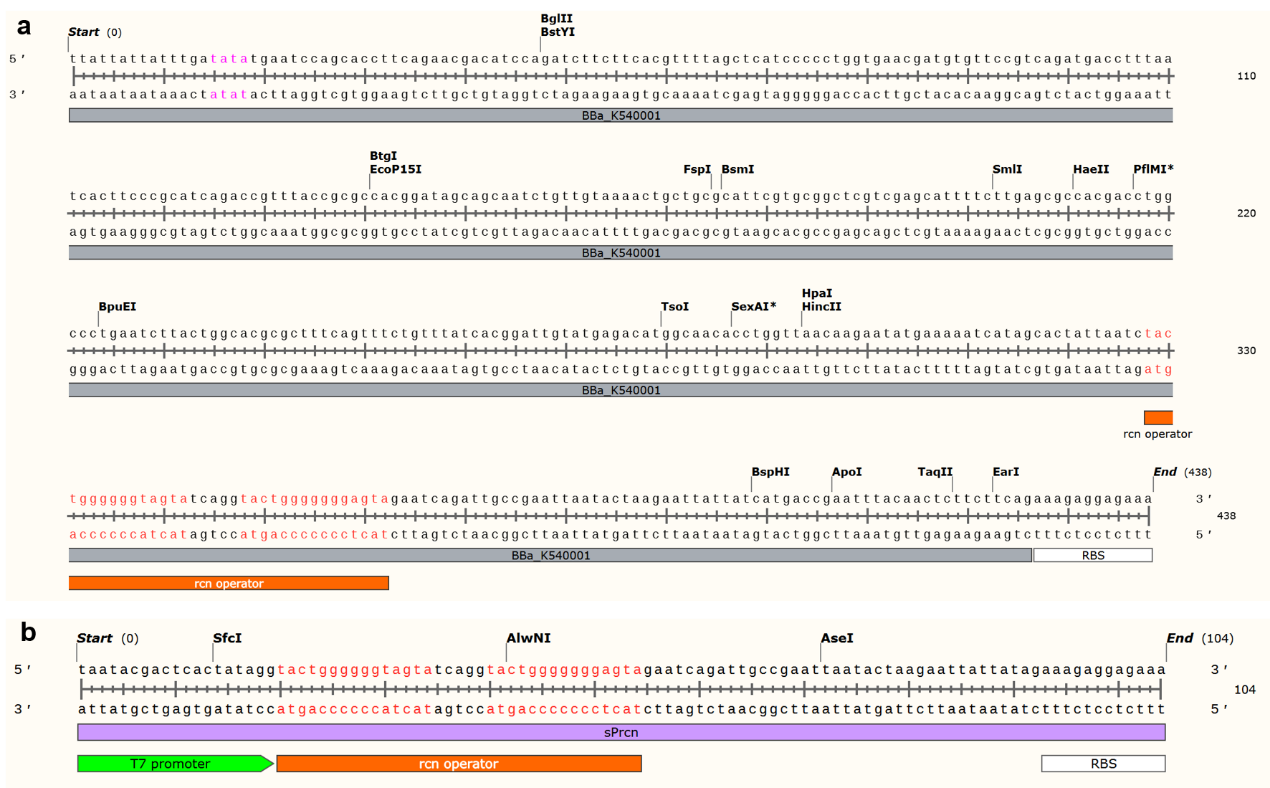 We promptly conducted experiments regarding the response of sPrcn to different concentrations of Co2+ and IPTG, worried that sPrcn might not function after our alteration to its sequence, whereas the results endowed us with much surprise. The fluorescence/OD600 increased rapidly when we raised the IPTG concentration, implying that the expression of eGFP could be controlled by T7 promoter in sPrcn, and that about 1mM IPTG is enough to induce high expression.

In the meantime, it turned out that sPrcn could respond to Co2+ as well, even with a higher sensitivity and efficiency. Cells treated with 60μM Co2+ or higher concentration would manifest a downward fluorescence/OD600 trend, and that dosage for Prcn might be around 150μM. And the peak value of fluorescence/OD600 for sPrcn reached more than 400000, which was 15000 higher than the peak value for Prcn, meaning that sPrcn provides the expression of downstream protein with a wider mediating amplitude. In contrast, high concentration of Co2+ did not necessarily translate into high fluorescent activity of the Prcn-gfp, and might exert a toxic effect on cells. In conclusion, sPrcn possessed higher sensitivity and efficiency than Prcn, perfectly in line with our expectations, overcoming the paradox of GFP expression caused by toxicity of metal ions. 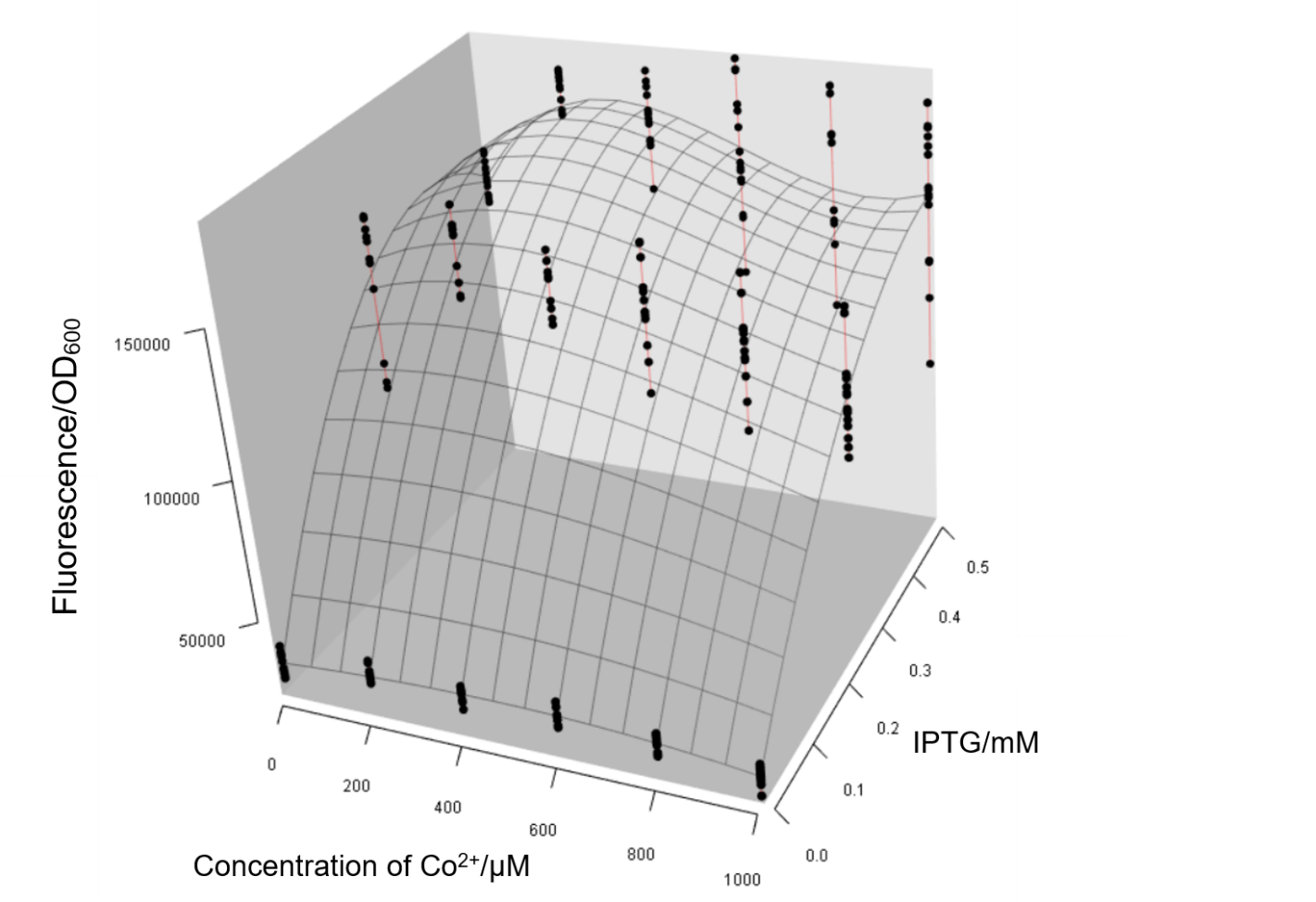 Figure 4. The expression of sPrcn upon the cobalt chloride and IPTG of different concentrations (with deficient oxygen). The E.coli BL21(DE3) were respectively treated with 0μM, 25μM, 50μM, 100μM Co2+ after the OD600 reached 0.4 to 0.6. After 11h we collected 100μL from each sample and measured their OD600 and absolute fluorescence. Each dot in the figure reflects one type of treatment. The trend surface represents predicted expression of enhanced GFP by polynomial models.

Similar to what we have done in kinetic measurement of Prcn, we initially used 1.5mL-Eppendorf tubes to culture E.coli instead of 15mL-round bottom tubes, leaving E.coli lack of oxygen. Under such conditions, the expression of eGFP could still be regulated by IPTG, whereas it became insensitive to the Co2+ of different concentrations, suggesting that sPrcn cannot functions as a cobalt-specific promoter under oxygen-deficient environments. However, through observing the value of fluorescence/OD600, sPrcn in cells cultured without sufficient oxygen had similar efficiency to Prcn in cells cultured with sufficient oxygen, which from another perspective verify that the introduction of T7 promoter tremendously promoted the efficiency of sPrcn.

1. We constructed our improved part, sPrcn, by introducing of T7 promotor and preserving the rcn operator.

2. The downstream expression controlled by sPrcn could be regulated by IPTG, and the concentration of 1.0-2.0mM is recommended.

3. Our improved part (sPrcn) possessed higher sensitivity and efficiency than Prcn, enhancing the expression of GFP by around 100,000 Fluorescence/OD600. Less Co2+ could be applied to reach a high expression of GFP, thus causing less harm to cells.

We believe our work can provide implications for the improvement of biosensors that can detect heavy metal both in natural environment and solutions in laboratory.