Our proof of concept is expected to be performed using a fluorometric assay in a 96 well plate reader. We plan to evaluate the optical density in the plate reader. The data obtained will be used to make a normalization curve and linear equations for each of the devices. Based on the fluorometry assay, those that are fluorescent will be inoculated in a culture, of which we would select individual cells. The inductors will be in solutions. We will have a baseline without any inductors. The individual genetic circuits will be evaluated separately and then all the devices together. With the results obtained, we will perform kinetics of the entire device. A validation curve of concentration vs induction will be created for each assay.

The outputs for device 1 are Homoserine lactone and mCherry. The mCherry gene (BBa_J176005) is a red fluorescent protein that comes from a monomeric red fluorescent protein from the coral Discosoma sp. The mCherry gene expresses a red light that has emission at 610nm and excitation at 587nm. We would qualitatively test the RDX concentrations by observing the intensity of the color red emitted by mCherry. While we would quantitatively measure the fluorescence of the mCherry reporter using a fluorometry assay in a 96 well plate reader. Also, this reporter will be used to monitor the transcription of the genes. We will use a control group that will not have an inductor or a reporter gene to compare the device efficiency. 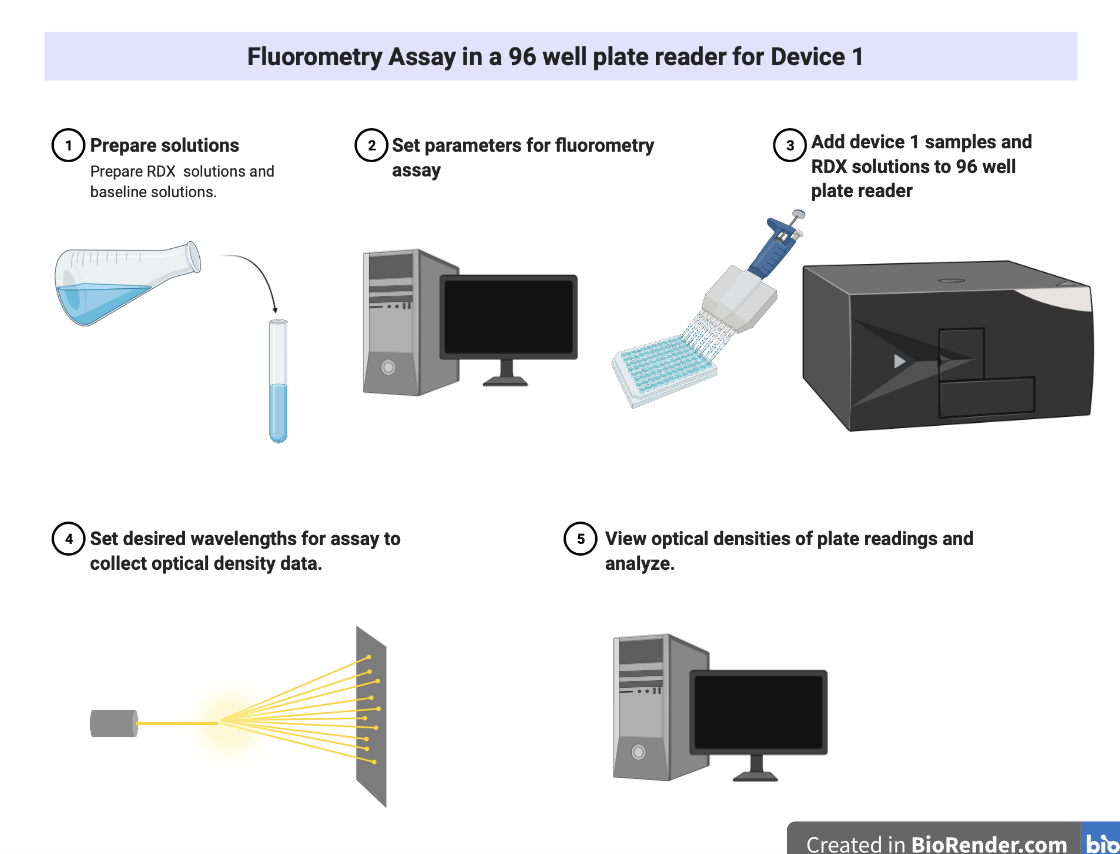 For the second device, the input would be acyl-homoserine lactone (AHL) and the output would be nitrite and formaldehyde. Based on this, the device would express a yellow hue that should be observed qualitatively in the presence of the homoserine lactone. This pigment is produced by the reporter gene amil GFP (BBa_K592010), and according to the wavelength spectrum of a range from 300-700 nm, the absorption peak is at 502 nm and an emission peak at 512 nm. We would quantitatively measure the fluorescence of amil GFP through the usage of a fluorometer assay in a 96 well plate reader. Additionally, this reporter will serve to monitor the device functionality. There will be a control group that will not have an inductor or reporter for an additional comparison with the function of the device. It has also been considered to use cyclic voltammetry to evaluate biodegradation capacity. 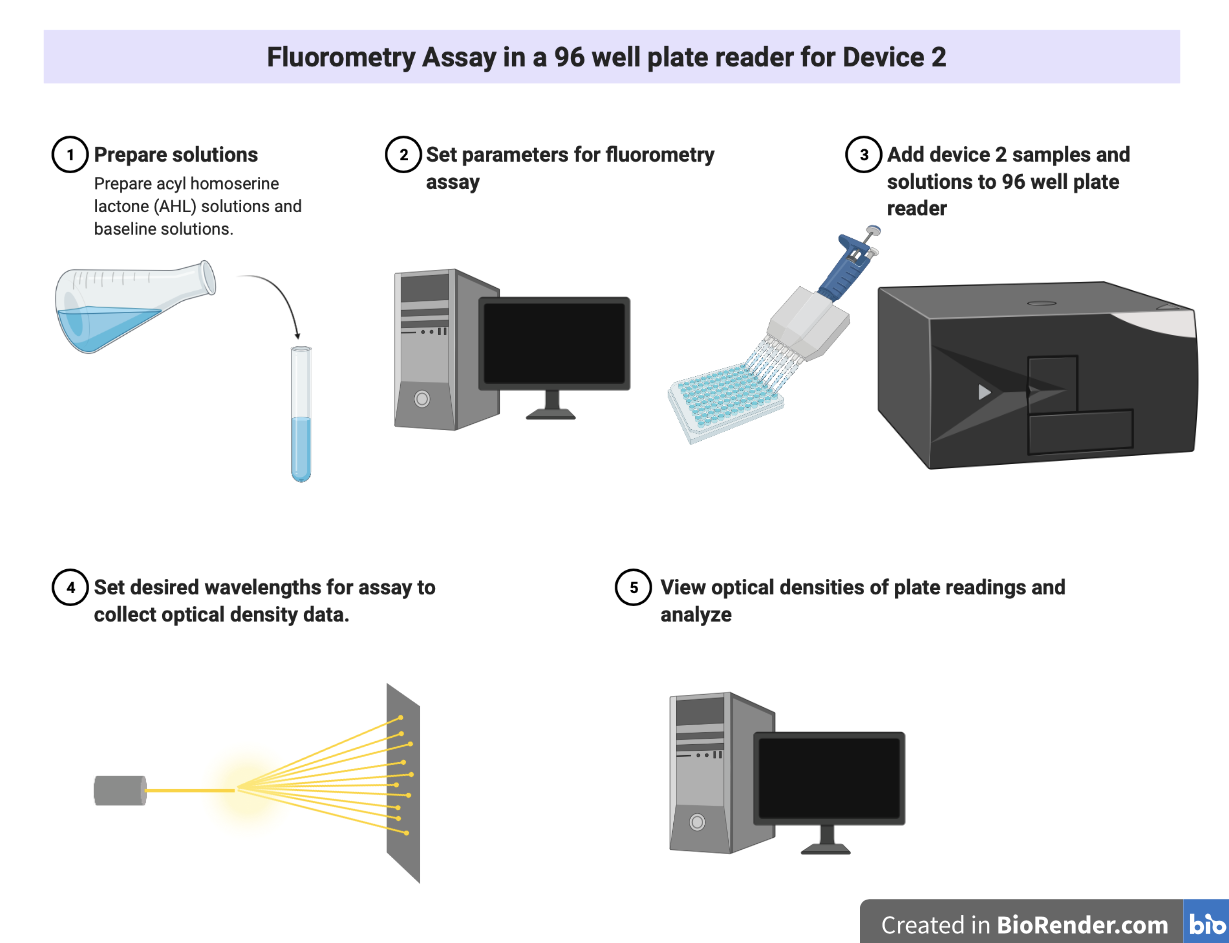 Our third device will stay in a theoretical form due to the difficulties at the moment of synthesizing the genetic sequences. We have not yet determined a specific proof of concept for this device, however it would focus on quantifying the levels of the inputs of nitrite and formaldehyde to determine the range that causes bacterial lysis. The evaluation of the lysis gene functionality would consist of carrying out multiple cultures at different concentrations of nitrite and formaldehyde. 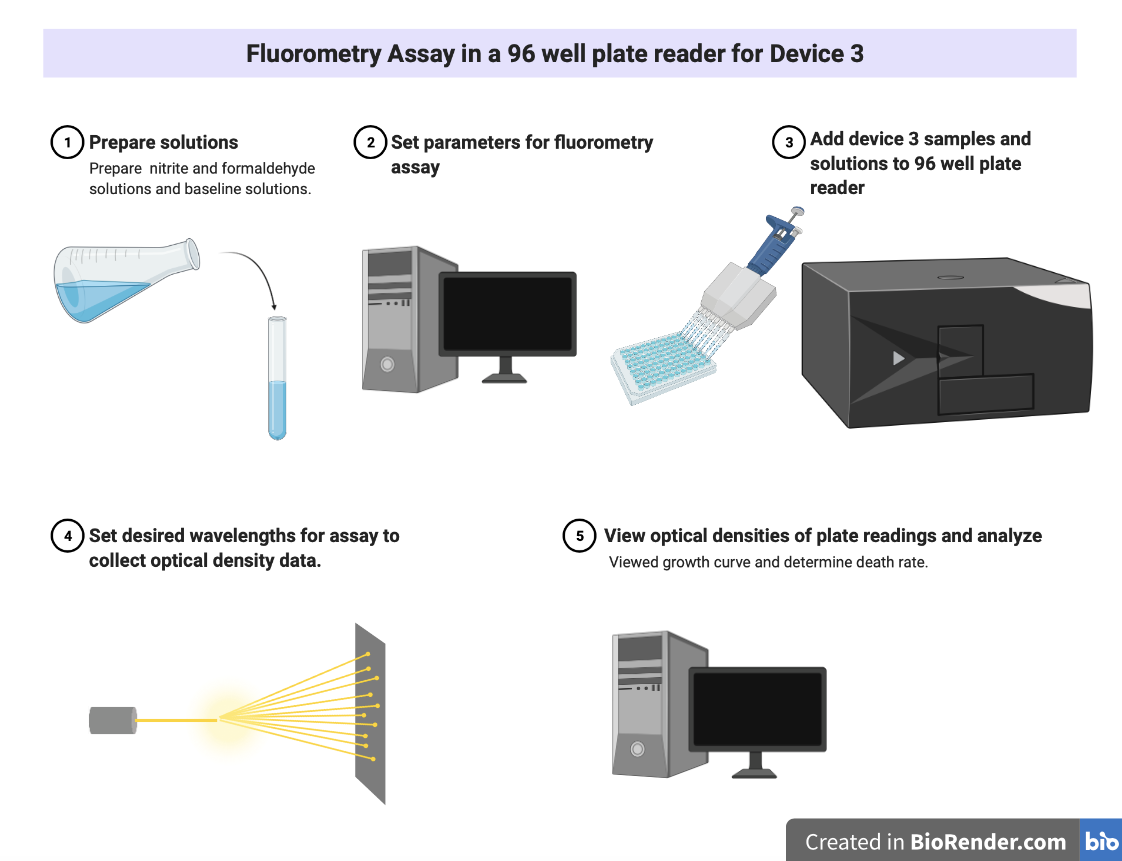 We expect to obtain concentrations, validate prototypes of the devices, establish effectivity in each of the different inductor concentrations and to determine light intensity emitted by reporter genes at different inductor concentrations. With the data collected we plan to make normalization curves, linear equations and to confirm the effectiveness of each device. As part of verifying the functionality of the devices, the quantification, detection and monitoring of the fluorescent signal produced by the reporter genes could quantify the rate of the transcription levels of the devices.

We expect to obtain a directly proportional relationship between the inductor and the reporter gene. Results should indicate that at a higher RDX concentration the reporter gene should emit higher fluorescence and there should be a higher AHL production. AHL will be the inductor to the second device so the second device’s activation will confirm the functionality of the first device.

The expected results should consist of observing and quantifying the functionality of the second device by measuring the fluorescence of the amil GFP reporter gene. Additionally this will confirm the production of AHL in the previous device because the device is activated through the interaction of AHL with the luxpr promoter.

Images were created with BioRender.com