Our plan starts with one single bacteria being able to degrade RDX and we expect it to end as a potential solution to the day to day contamination issues the people of Vieques are constantly facing. As mentioned in our Description page, several health risks are predominant in the municipality due to the presence of explosives and dangerous compounds in the waters. The Anones Lagoon has been identified as one of the areas with the highest amounts of contaminated water, especially due to the presence of RDX in its environment. Due to this we would like to focus on this area specifically due to it being one of the most dangerous and troublesome ones. We believe that attacking the root of the problem is the first step to treating it. 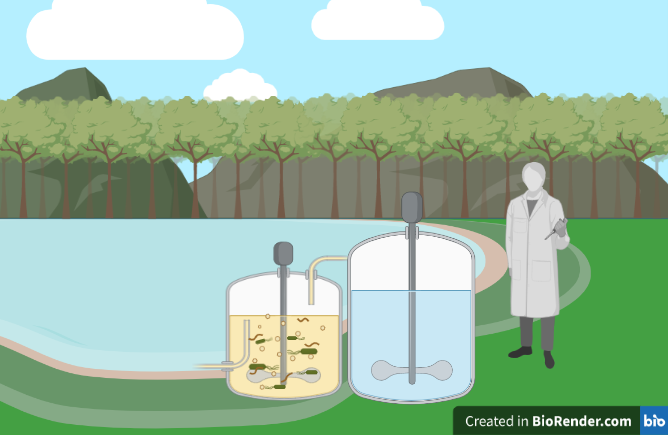 Figure 1. Conceptual diagram representing our proposed implementation project, showing how a large scale bioreactor would be localized right next to the Anones Lagoon, followed by an enclosed water treatment machinery. Made using Biorender.com.

Our implementation plan involves the use of a larger scale bioreactor capable of processing large amounts of contaminated water, and letting it recirculate and ensuring the highest amount of RDX removal as possible. Similarly to our small-scale bioreactor, we expect this larger scale model to contain several sensors to monitor the constant changes in temperature, pH, oxygen and metabolite production. Our genetically modified bacteria produce nitrite and formaldehyde as by-products of the denitrification process of the explosive compound, meaning these two compounds must also go through an additional bioremediation process to ensure an efficient cleanup process of the contaminated waters, and avoid leaving residual contaminants such as nitrite and formaldehyde.

In case of this large-scale bioreactor, its design would be that of a continuous stirred tank bioreactor. In large biological water treatment plants, such bioreactors usually are operated in continuous mode. This design would also enable the water to be uniformly distributed instantly upon entering the reactor, facilitating the biodegradation process by maintaining a constant flow of its inner components. Additionally, the constant water inlet will allow continued cell proliferation and promote the denitrification of the RDX present in the influent water.

Regarding our chassis, we would be using Pseudomonas putida as our model organism. The reason as to why we chose P. putida is due to the fact that it is considered one of the most versatile bacterial strains. This saprotrophic bacteria is Gram-negative and aerobic, requiring oxygen for its metabolism, which is fitting for our stirred tank bioreactor system's aerobic inner environment (Becerra, 2007).

Another favorable characteristic is the bacteria's ability to withhold several plasmids at the same time, which benefits our multiple-device genetic circuit. Another significant characteristic is the tolerance to environments with metal contamination and the ability to increase resistance to heat and saline stressors through its filamentous phenotype. These characteristics make this organism of great interest for bioremediation, which made it the perfect fit for our genetic circuit that focuses on the detection and biodegradation of the explosive RDX (Becerra, 2007; Loeschcke & Thies, 2015).

We are aware of the several safety issues we need to take in consideration while proposing this implementation work plan. Our proposed third device, which we expect to be fully developed and validated, contains a killswitch which will maintain a control over our bacteria and enable cellular lysis once nitrite and formaldehyde is detected in the environment. Our third device also contains an RDX-induced promoter, which means our genetic circuit won't be functioning unless there's RDX in the environment. This ensures that our bacteria won't activate its biodegradation mechanism unless it is present in an environment with RDX.

Lastly, we are aware of the risks that come from working with explosives and contaminants such as RDX, nitrite and formaldehyde. Due to this we need to ensure that our machinery is capable of containing RDX without any risk of it escaping the bioreactor and leaking out into the Anones Lagoon. The same applies for the processed waters, since they need to recirculate and be processed further to eliminate residual nitrite and formaldehyde.

Other challenges present in our project include the maintenance and supervision of our large scale bioreactor. While it should be able to work independently due to the several sensors present in its machinery, we also need to take in consideration other factors such as oxidation of the bioreactor's material, accumulation of biomass and the presence of other contaminants in the Lagoon's waters. While this bioreactor is made to treat RDX contaminated waters, we are aware that the Anones Lagoon contains additional contaminants such as lead, mercury and arsenic. These variables need to be taken into consideration when polishing the reactor's design. We recognize that challenges still exist that needs to be solved before considering the implementation of this bioreactor, but we are confident that the basis of our project could lead to the development of several other novel solutions to this contamination issue present in Vieques.