Application of our system into the hardware

We decided to test our Hardware to induce the page lysis and GFP production in order to prove that the phages do induce lysis in a minicell producing strain and that our plasmid is induced by arabinose. The steps are performed in the hardware machine to show that it operates properly.
We used our TB43 lambda strain transformed with our GFP inducible by arabinose plasmid. As a preliminary step, the tanks have been bleached and rinsed with distilled water.
The first step is the incubation of our TB43 lambda cells at 30°C overnight in 500 mL of LB with antibiotics (kanamycin). We then measured with TECAN SPARK plate reader the OD600 and the fluorescence of our samples (9 technical replicates) to study these parameters before cell lysis.
After increasing the temperature to 42°C, it is expected to see a decrease in OD due to the lysis of theE. coli cells. by the phages. At the same time, an increase in fluorescence due to the GFP production induced by 10mM of arabinose in minicells is expected. This concentration was chosen as the result of our plasmid characterization. 10mM is the optimum concentration for high yield and low burden.

First, the TB lambda strain was grown for 12h at 30°C in a normal incubator to reach an OD of approximately 0.15. It is important to keep the temperature under or equal to 30°C, in order to not induce phage lysis. 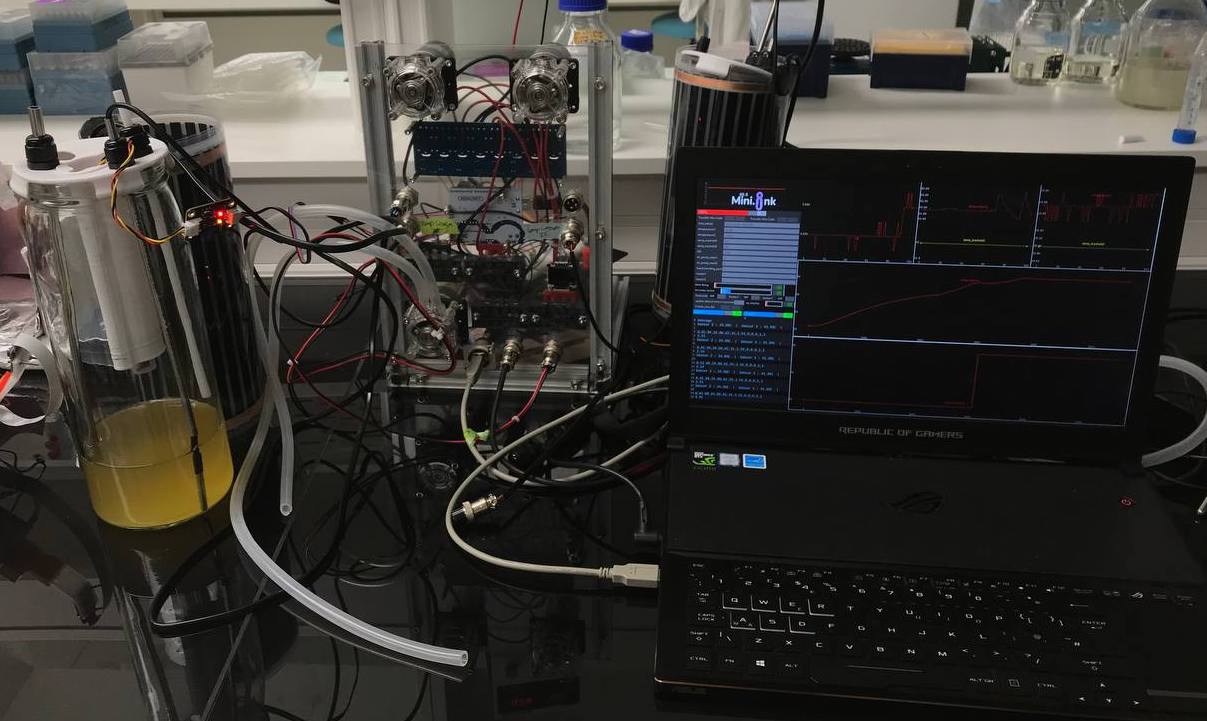 Then, the temperature was increased to 42°C and maintained for 3 hours. We are expecting to kill the majority of the mother cells. The step of raising the temperature took 6 hours. 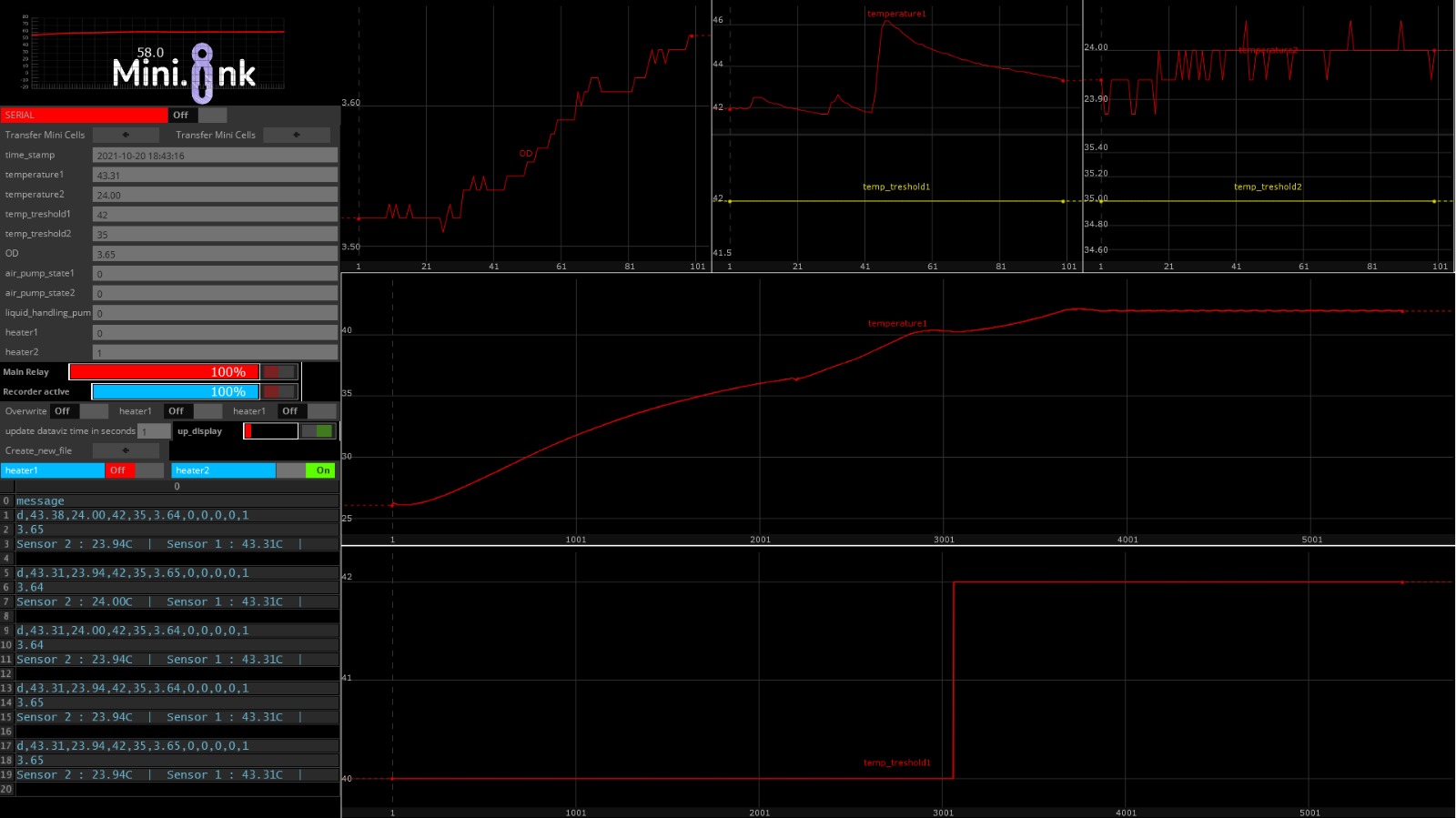 Figure 2) Temperature regulation of our Hardware. Data collected with the temperature sensors.

After 3 hours at 42°C, arabinose at a concentration of 10mM was added to induce GFP production by our plasmid. Then, samples were taken to measure both the OD and fluorescence in a TECAN Infinite. Measurements were taken every 10 minutes over 9h. 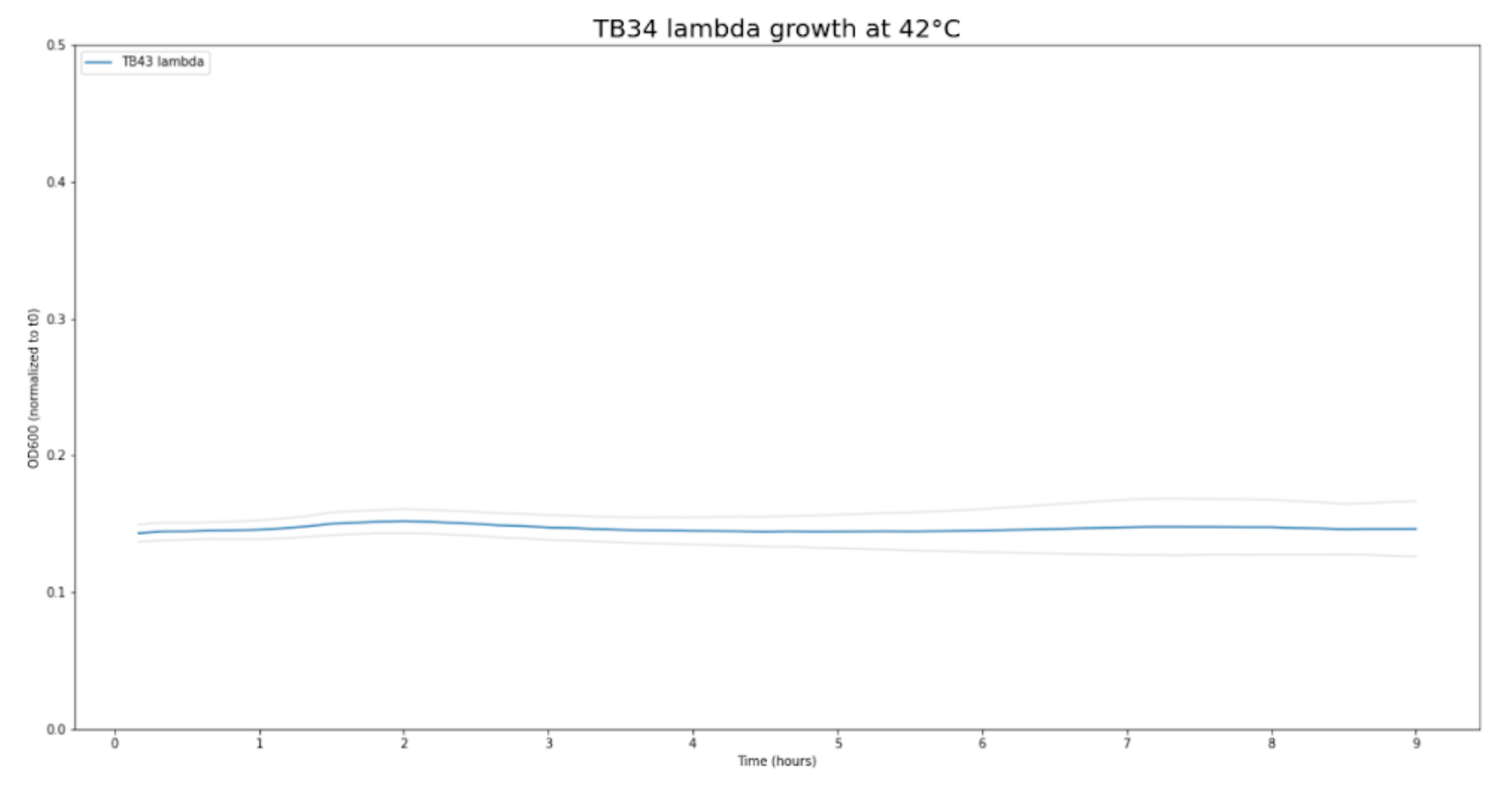 Figure 3. Timecourse measurement of the OD for the TB43 lambda strain at 42°C. The mean of 9 replicates is plotted.

Before the 2-hour incubation at 42°C in our hardware, the OD was of 0.15. We can see that the OD decreased during the 2 hours as the initial OD is below 0.15. This is due to the phage-induced cell lysis. The OD does not increase in the next hours indicating the absence of bacterial growth. The data with TB43 lambda in the hardware is similar to the data obtained previously for minicell purification. This confirms both the correct functioning of the phage system and of the hardware heating system. 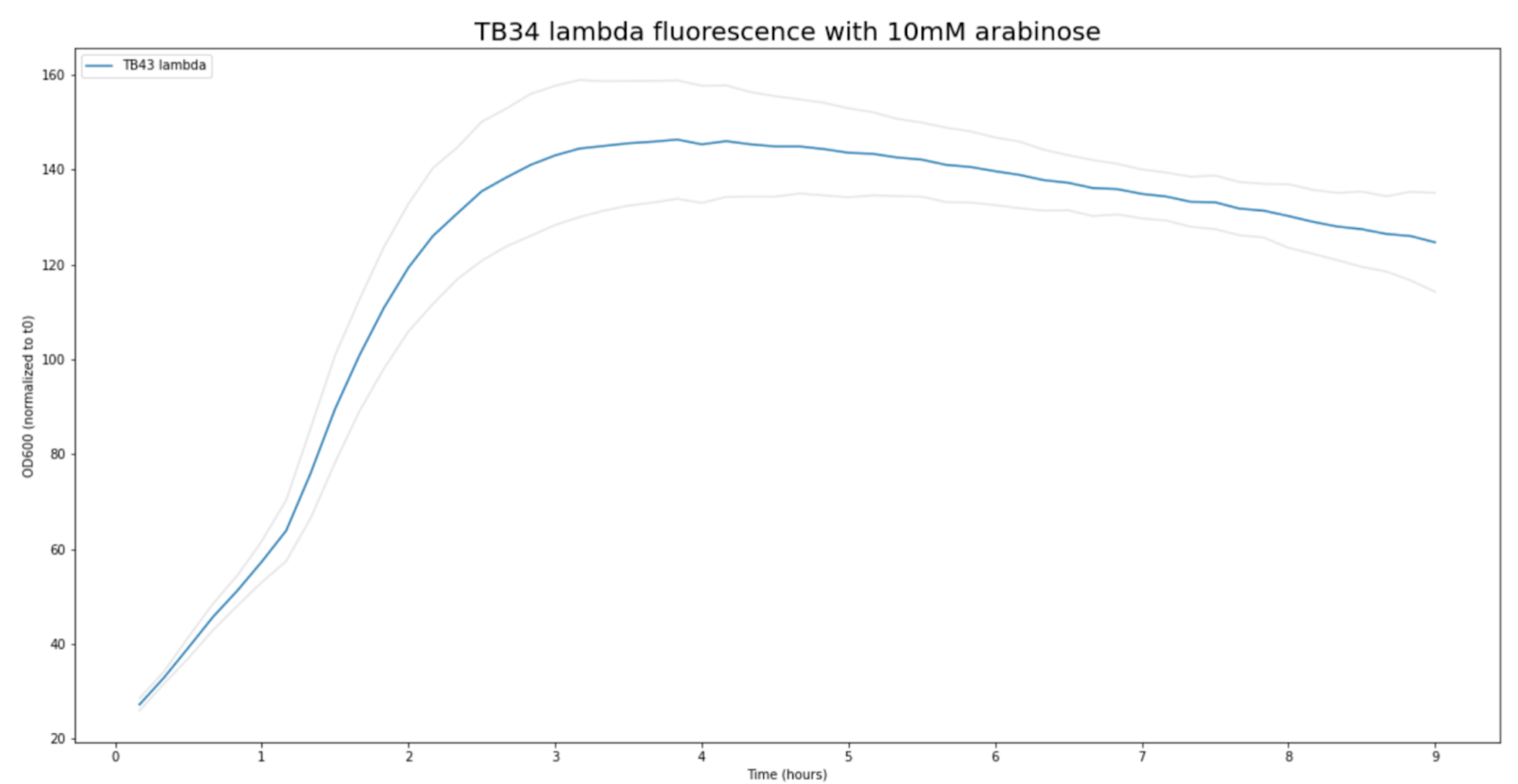 Figure 4) Timecourse measurement of the fluorescence for the TB43 lambda strain transformed with our GFP producing plasmid arabinose induced. The initial arabinose concentration is 10mM. The mean of 9 replicates is plotted.

We can observe an exponential fluorescence increase until 3 hours. This proves the induction of GFP production by arabinose. There is a slight decrease in fluorescence after 3 hours. It is correlated to the decrease in OD. It is not possible to account for the fluorescence emitted by minicells as the sample is not 100% free of E. coli which keep producing GFP.

With this experiment we proved that different parts of our project that were created separately can be combined together and perform equally. We proved that:

In the future, we want to implement the filtering system (See Filtering section)in addition to the targeted lysis in order to increase the purity of minicells. We also want to improve the time required to heat our culture in the incubator. We hope that in the future it will be possible to produce biosafe and sustainable proteins at a local scale.

Purified minicells -resuspended in PBS- were examined for the Taq production by centrifugation at 13,000g for 1 min. 3,5,7,10,12,15 μl of the supernatant was added to a 50 μl PCR reaction. Amplification was performed in 1X Standard Taq Reaction Buffer(NEB) containing 0.5 mM dNTPs, 1 mM MgSO4, 500 nM of the forward (VF) and reverse primers (VR) and 10 ng of DNA template.

Following an initial 4 min incubation at 95°C, the reactions were subjected to 30 thermal cycles of 30 sec at 95°C, 30 sec at 50°C, and 1 min for the extension at 72°C. The resultant PCR products were analyzed by 1.2% agarose gel electrophoresis. DVK_AE (addgene number 66067) was used as a template, the expected amplicon size generated by VF and VR primers is 841 bp. 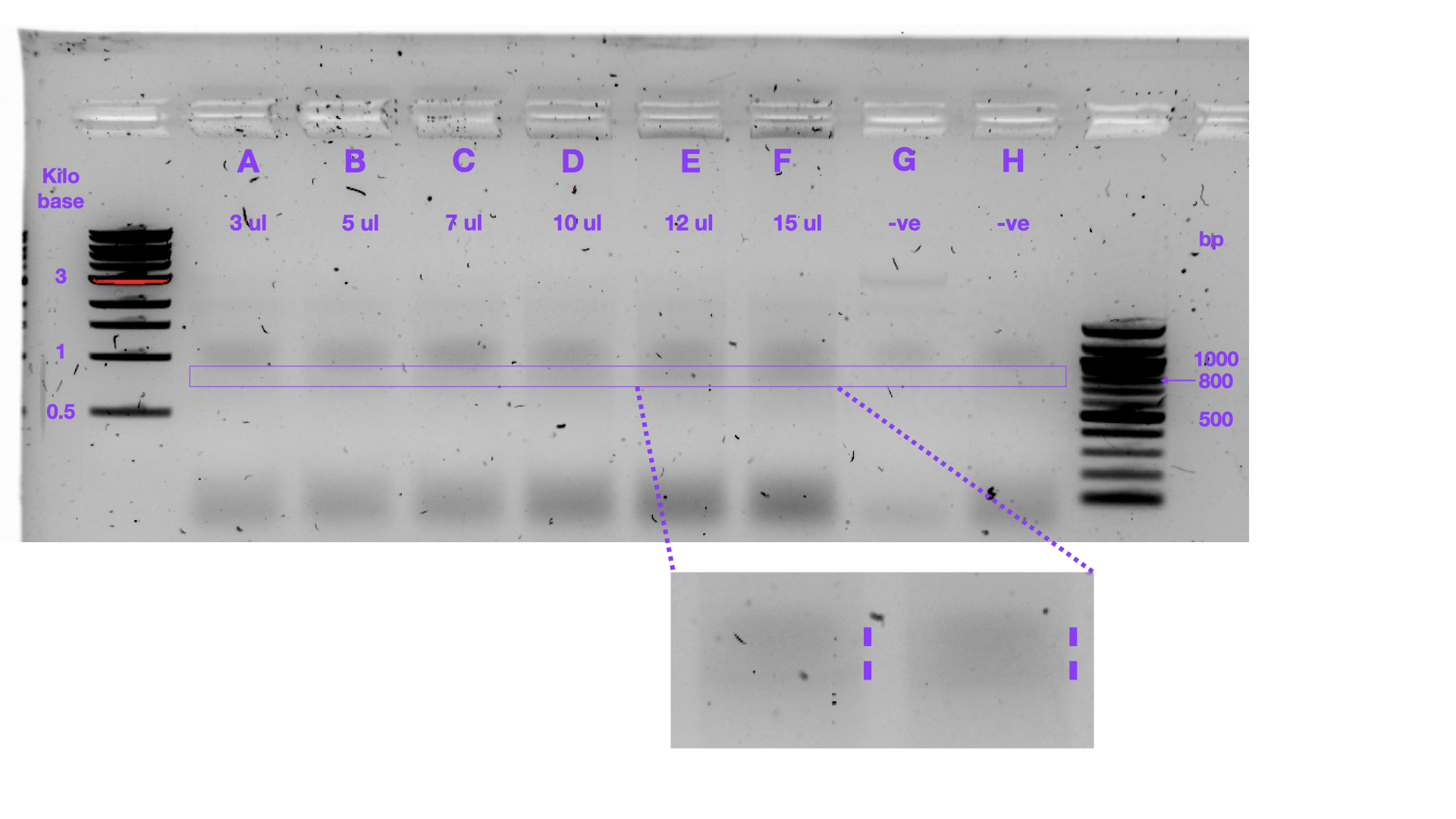 Figure 5) Gel image of the PCR products where the minicells’ supernatant was added directly to the reaction in different volumes, in A: 3ul, B: 5ul, C: 7ul, D: 10ul, E: 12 ul F:15 ul. G: is the no supernatant control. H: is the no template control. First lane: 1kb ladder (NEB), last lane 100 bp ladder(NEB) The expected amplicon size is 841 bp; we did obtain very weak bands corresponding to the expected size in reactions D, E and F, which indicates not only the success of the Taq polymerase production in minicells but also the possibility of using the crude extract of minicells producing Taq to perform a PCR.

However, since the bands obtained were weak, and they were only noticeable when higher volumes of the supernatant were used, we believe further optimization is needed, where a higher concentration of minicells is used or different reaction conditions are tweaked.

For the controlled production of Indigo, our team focused on engineering a bacterial strain to produce the tmm gene in the presence of L-arabinose in the medium. This would allow us to control indigo production as it will only be produced in the L-arabinose containing tank of the hardware system where only minicells will be present.
We decided to use Circular Polymerase Extension Cloning (CPEC) to clone tmm into two plasmids: pBAD-pR obtained from Dr. Paul A Davidson (University of Sheffield) and pST000 obtained from Dr. Jake Wintermute (CRI).
pBAD-pR plasmid contains the whole arabinose operon (AraC, pC and pBAD promoter) ensuring a tight and controlled expression of the protein of interest.
pTS00 only contains the arabinose promoter and would therefore be more leaky on its own. In both cases, the tmm gene was cloned downstream of the promoter (after the ribosome binding site). 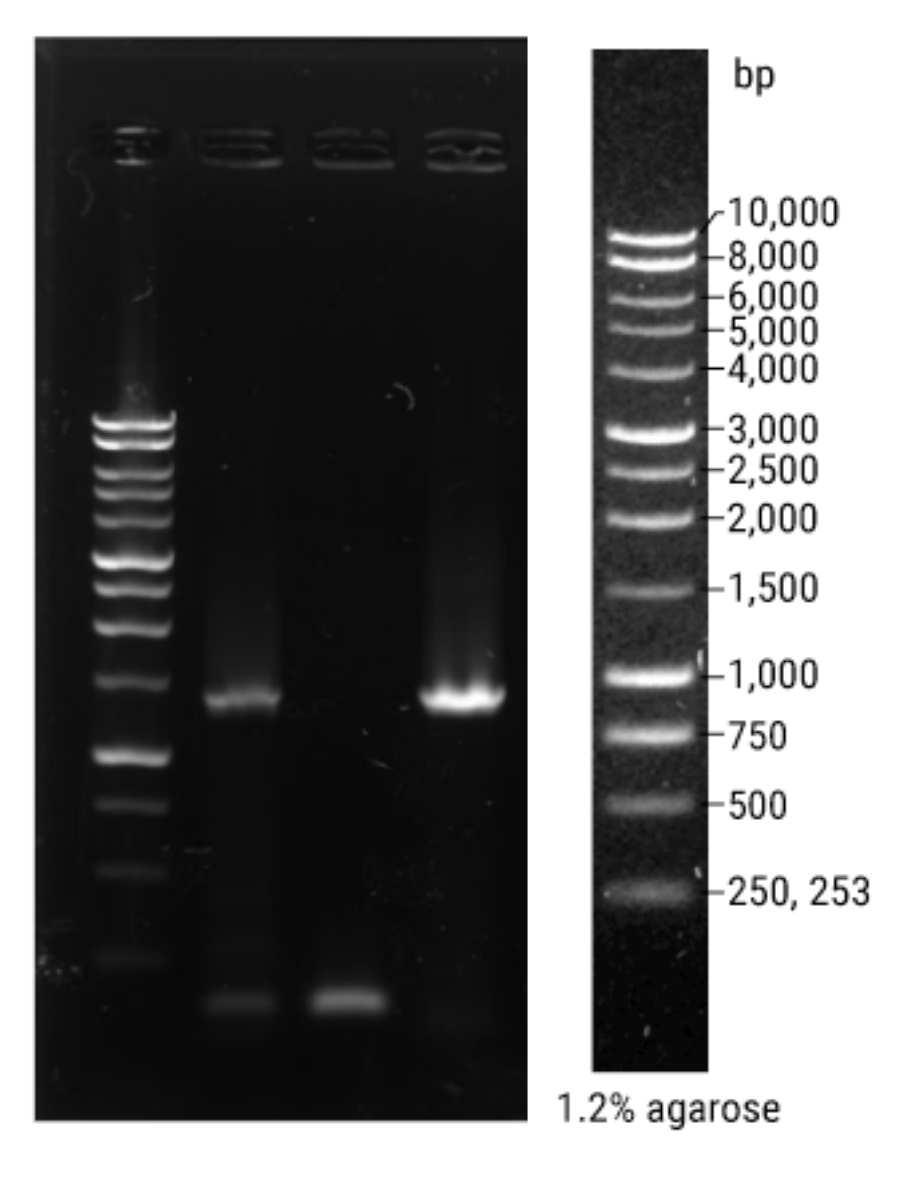 A band is visible around 1.2kb, the size corresponding to our plasmid. The product has been sent for sequencing. The results were not received before the wiki freeze. 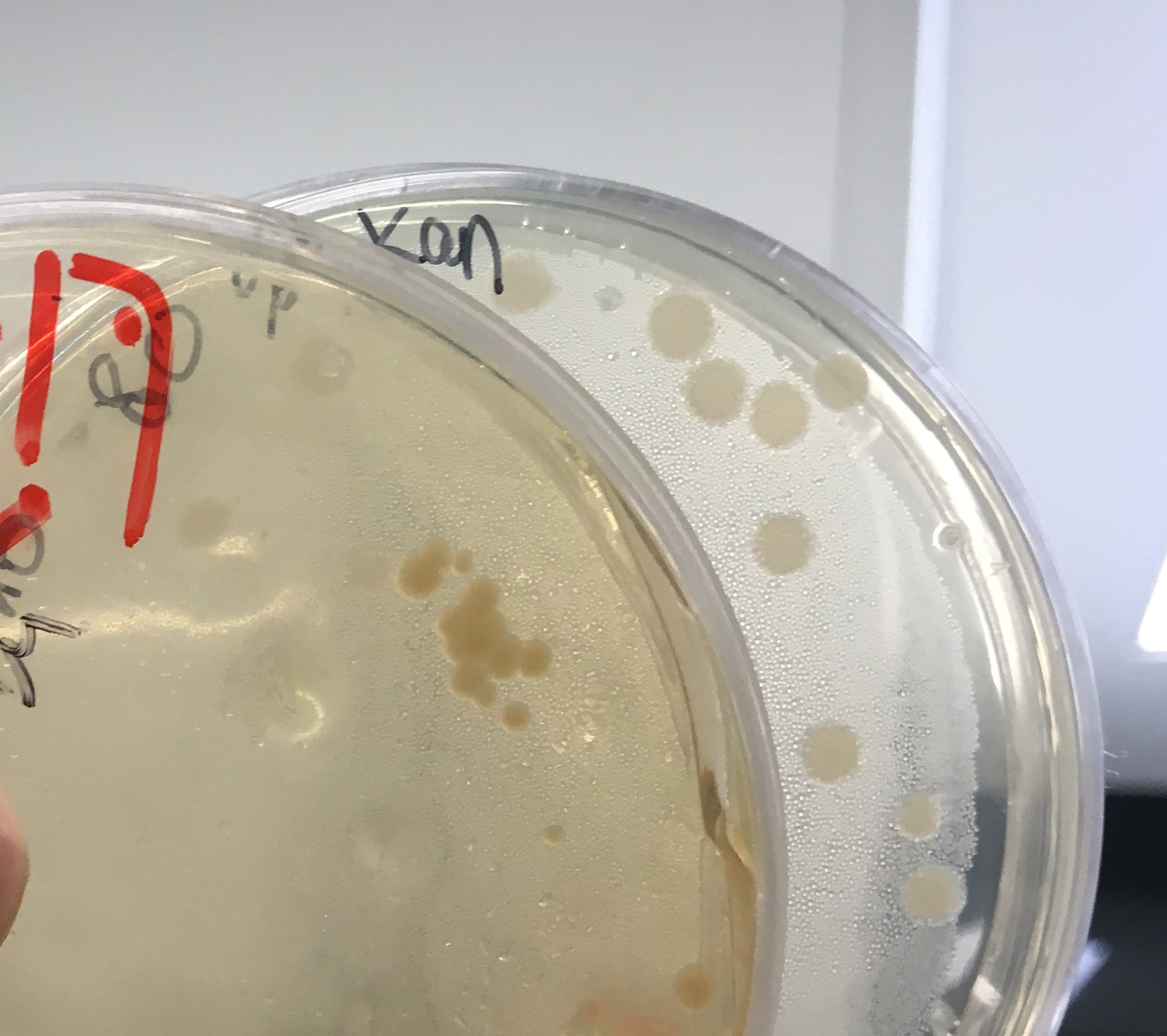 We can see a difference in color between the cells transformed with our TMM plasmid and cells not containing the plasmid. The cells containg the plasmid a darker, almost orange. This shows the production of indoxyl, the precursor of indigo. The plasmid is a medium-copy plasmid. This can explain why the color is not very strong.
Further characterization will be conducted to confirm and quantify the expression of TMM by the cells.