In these years, pollution caused by chemical dyes has been paid more and more attention. Through reading relevant materials and the phenomenon we noticed in daily life, we found a kind of dye which was allowed to be worn in the royal imperial family, magistrates and some elites as a symbol of power––Tyrain Purple.

This purple dye comes from changes in the chromophore of the indigo moiety by the addition of two bromine atoms in 6BrIG. It was a massive task to obtain Tyrain Purple in ancient times and .this process produced an awful smell.

Today, chemical industry makes life more colorful and convenient. However, as we can see in some places, the riveres turn into a strange color and the fishes are crying, the air diffuses a vile smell and the birds are fleeing. Although the chemical industry has greatly increased production, it has also caused damage to the environment. So where is the light of dye production? We think it is bio-production.

We redesign the metabolic pathway of 6BrIG through biosynthesis, the enzymes we used are as follows: 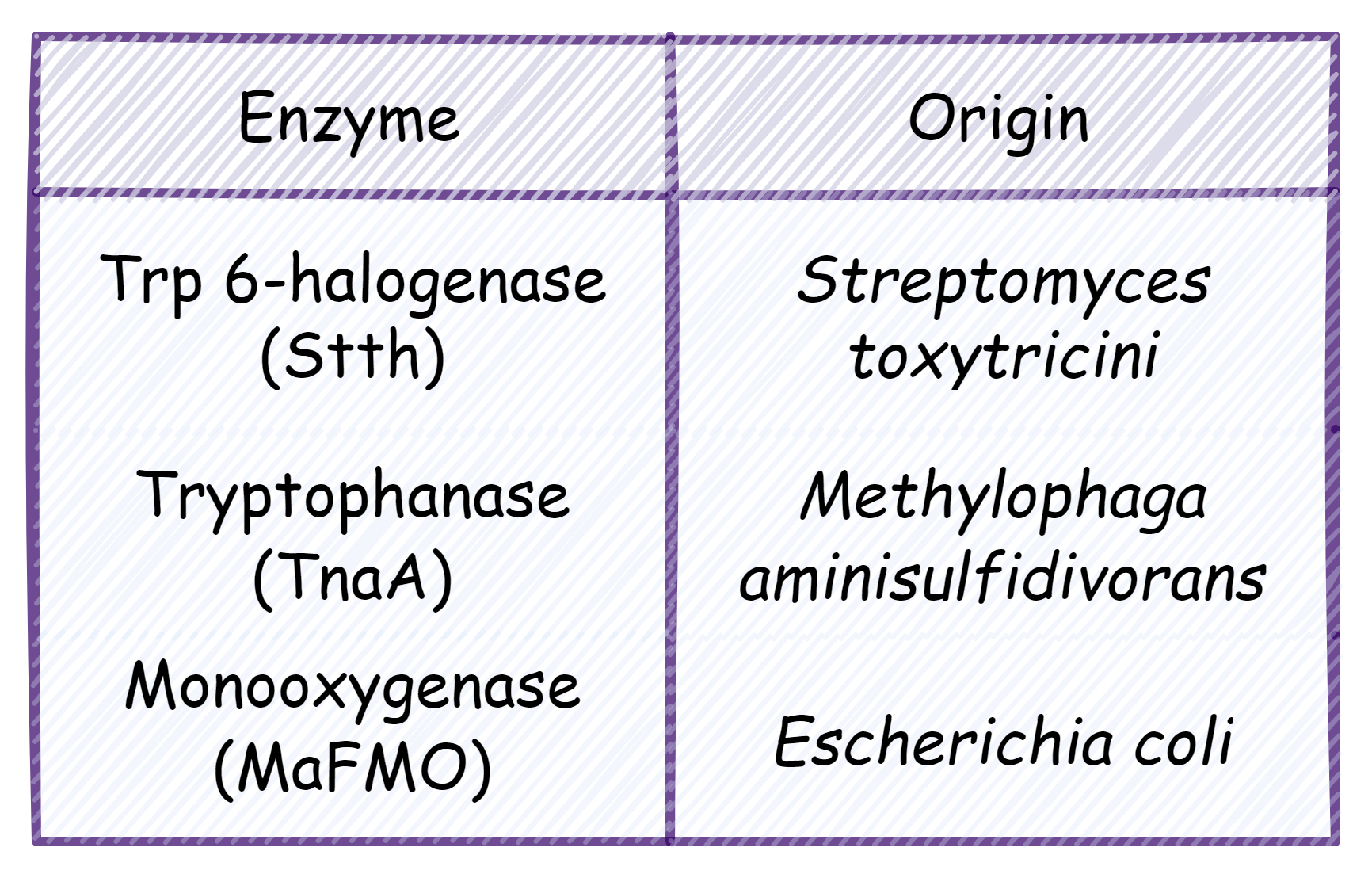 Fortunately, these enzymes are originated from different microorganisms and we can find the nucleotide sequence through NCBI. We choose pET28a as the basic plasmid because of its high efficiency. And then we synthesized these genes through GenScript. 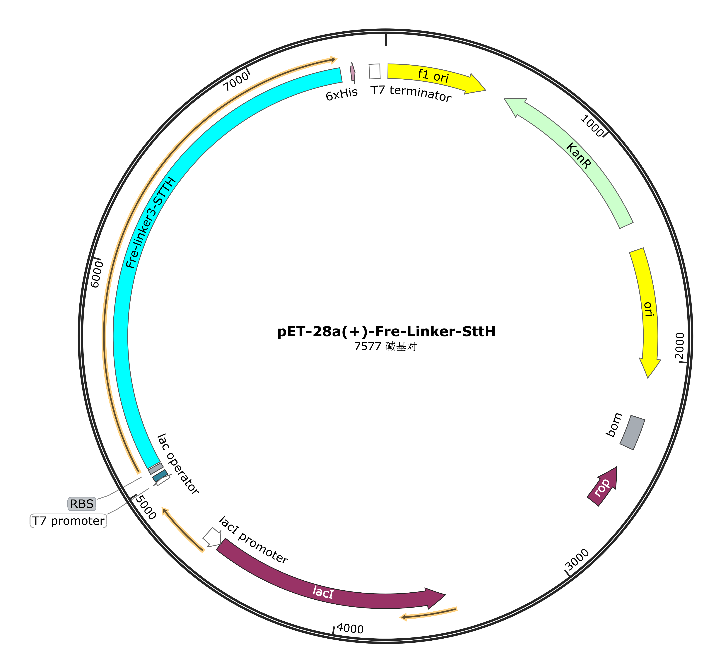 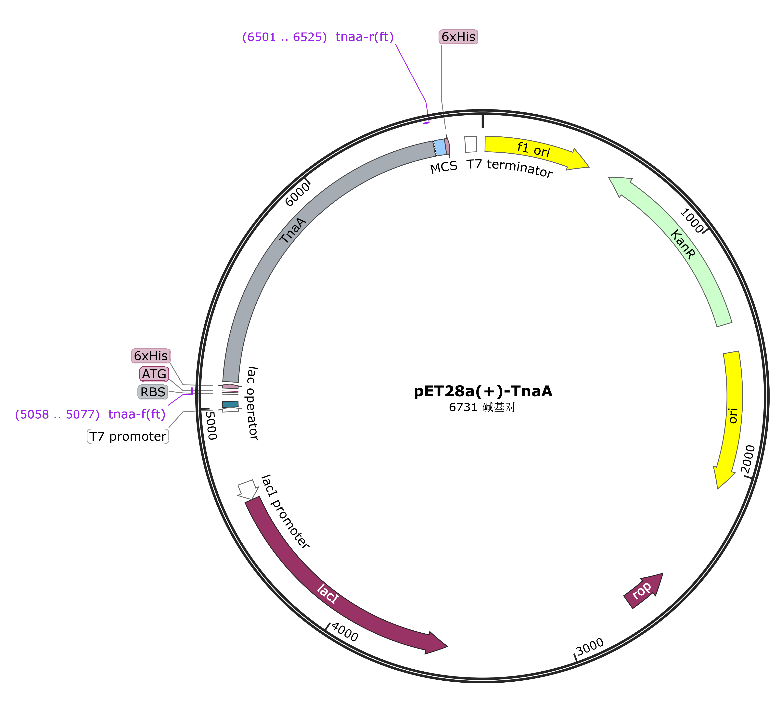 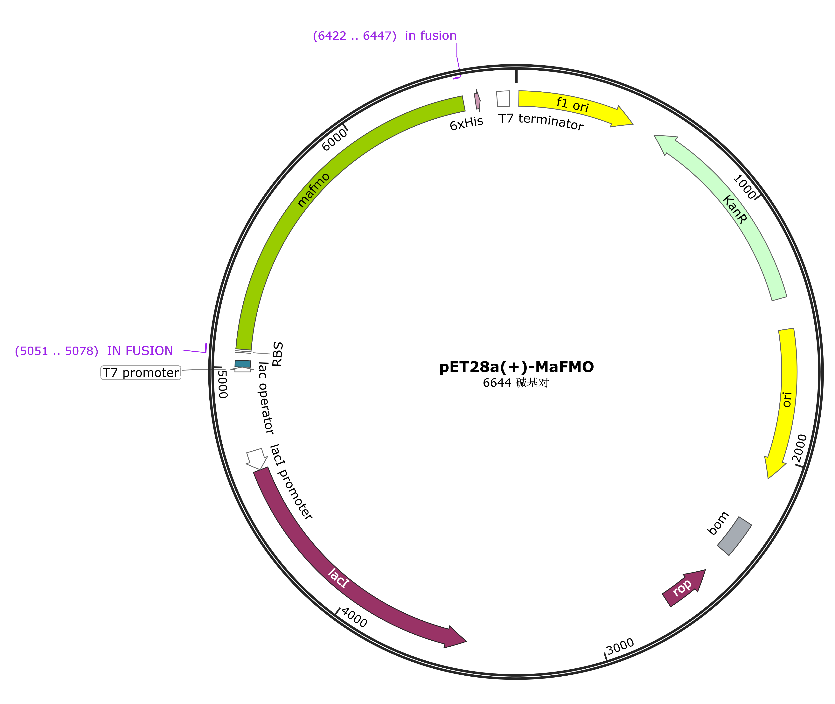 We obtained the DNA sequence of SttH from NCBI and constructed an expression vector successfully. After collecting the bacterial culture, we resuspended the pellet with PBS, added glucose, NaBr, and tryptophan to it, placed it in a shaker at 30°C, 220rpm, but didn’t get much the 6-Br-Trp we wanted.

After consulting some related literatures, we learned that SttH could successfully overexpressed in E. coli, but the enzyme mostly existed in an insoluble form, possibly limiting the conversion of bromination up to 31.2%[1]. To improve the bromination reaction rate, we attempted to increase the solubility of SttH by constructing a fusion enzyme with a highly soluble protein at the N terminus of SttH[2]. We chose Flavin reductase (Fre) as a fusion partner for SttH, since it is highly expressed in a soluble form in E. coli and can regenerate FADH2 efficiently. 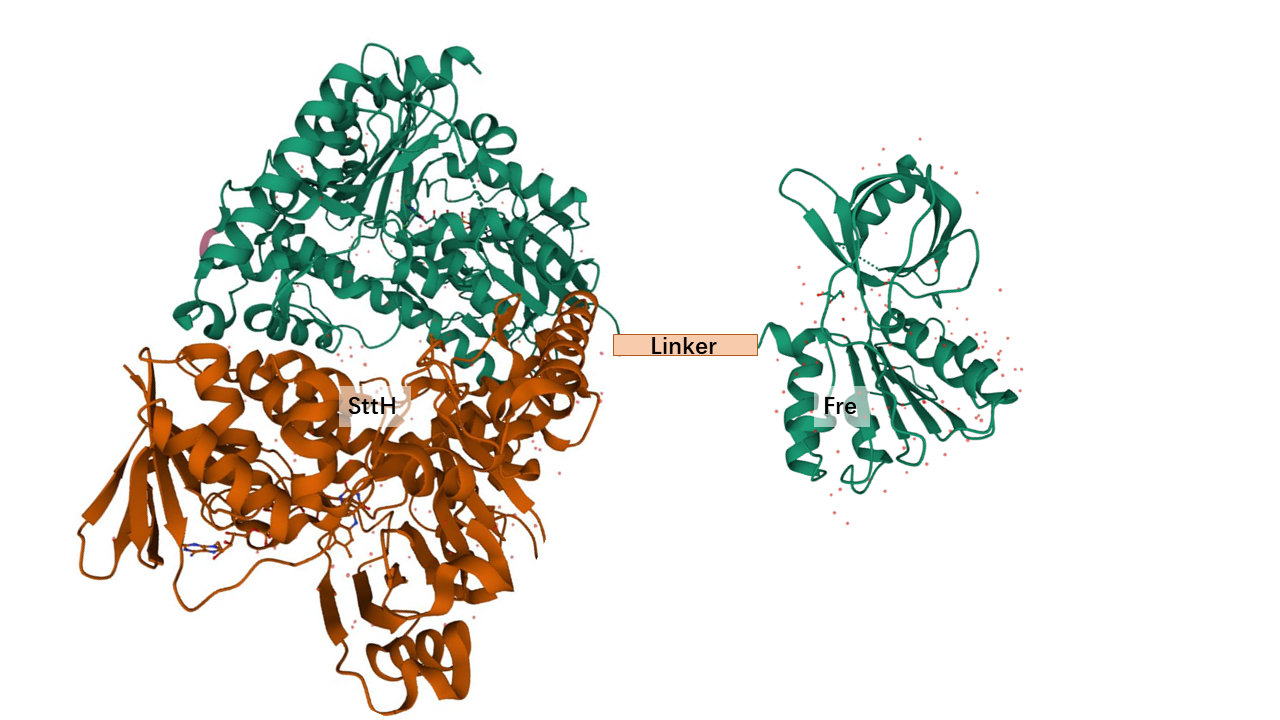 SttH and Fre are connected through a linker 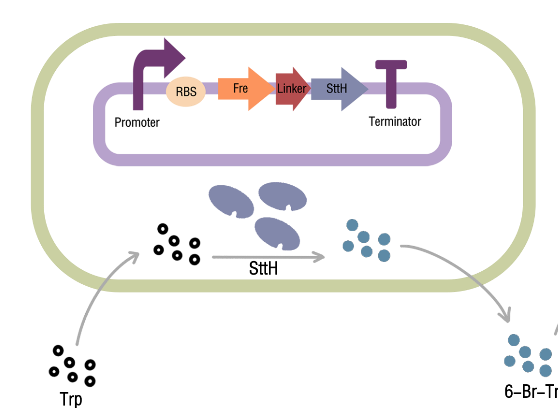 Our design in the first cell

Knock out internal TnaA through CRISPR/Cas9

During the experiment, we found that our final product was blue rather than purple, because indigo was accidentally appeared during the first step of the whole-cell reaction, it was undesirable. 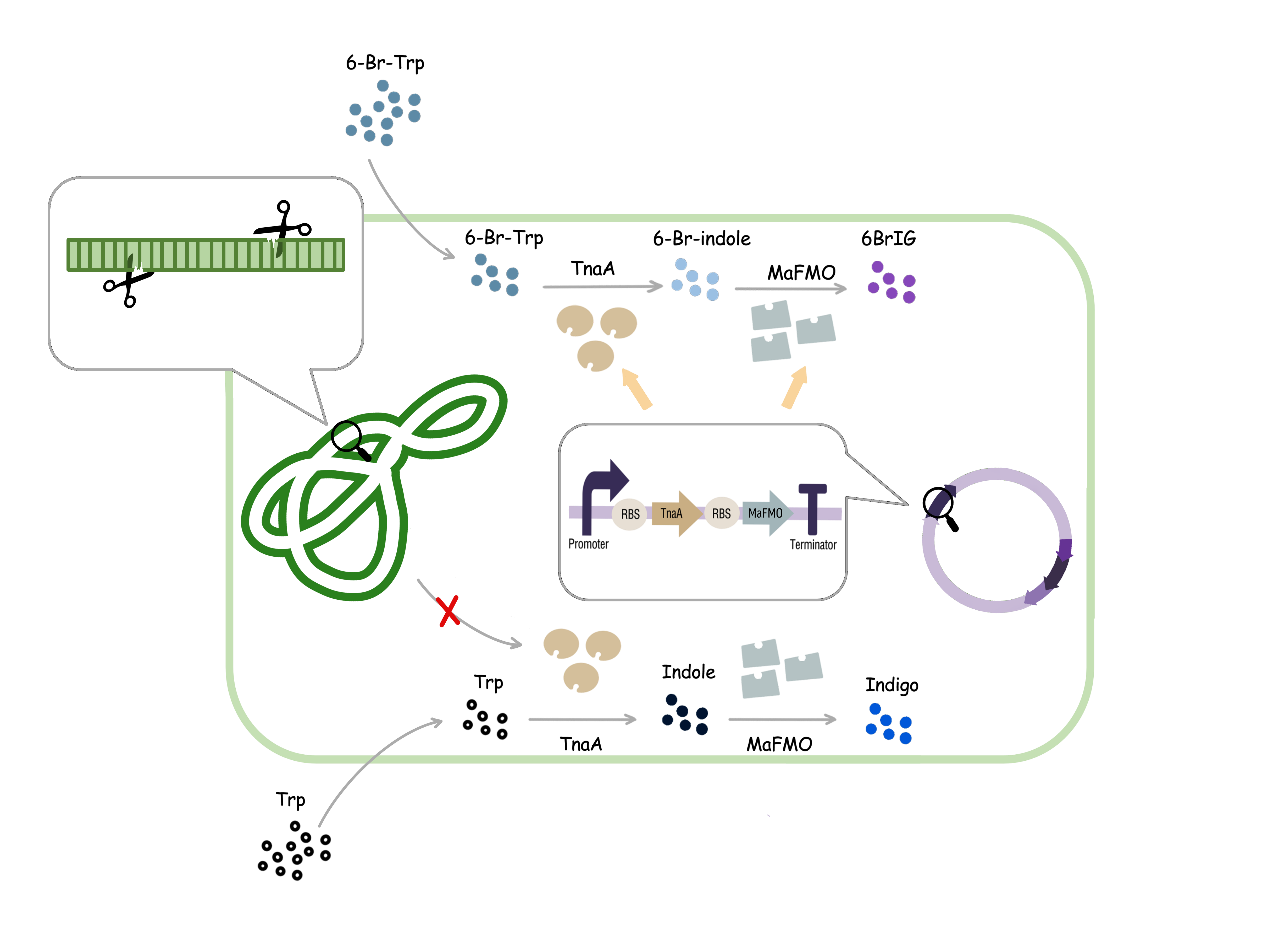 We chose to use the double plasmid CRISPR/Cas9 gene knockout system, which is efficient and convenient. When we had no way to obtain plasmids, we were surprised to find that BJU_China was knocking out this gene and they presented us with two plasmids generously. 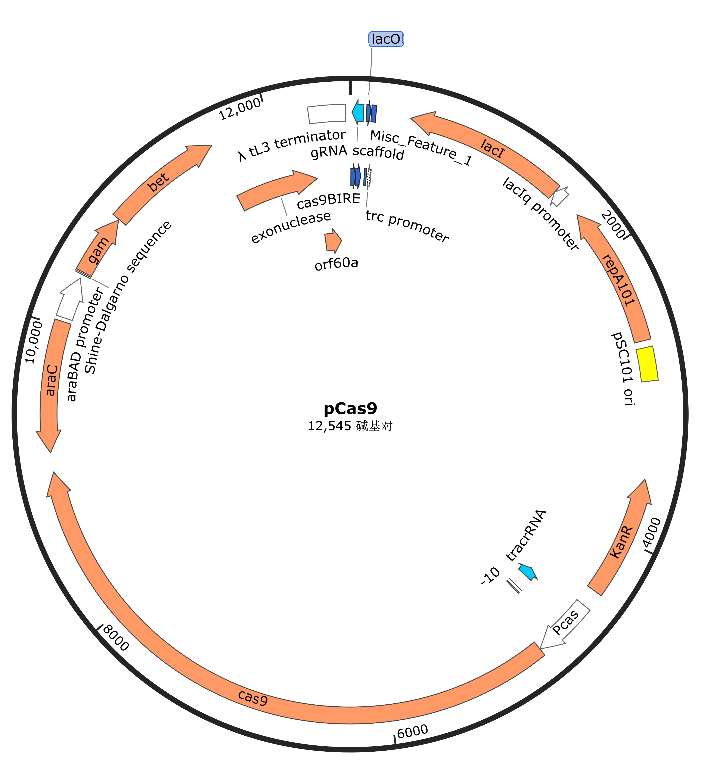 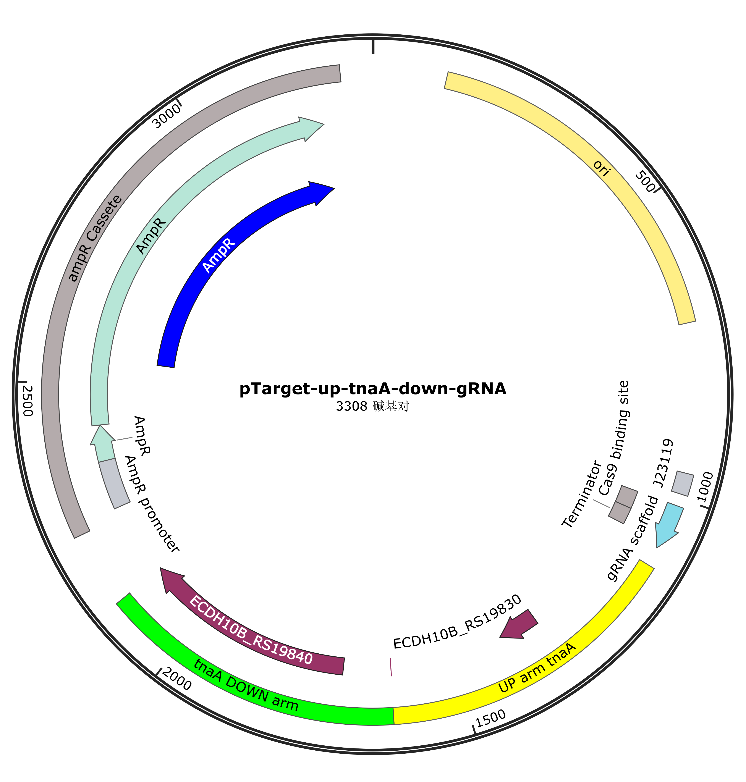 Firstly, we expressed MaFMO and TnaA in two separate cells, and added the existing 6-Br-Trp to the mixture of MaFMO and TnaA to obtain a purple solution. Although the 6BrIG was produced successfully, we thought this complex process wasted a lot of 6-Br-indole.

To improve the production of 6BrIG, we plan to make MaFMO and TnaA expressed in only one cell. Here we choose In-Fusion seamless cloning technology to construct expression vectors. This technology gets rid the limits of restriction sites, and we can redesign the plasmid brilliantly.

We successfully ligated the two gene fragments into pET28a and obtained transformed colonies, which was confirmed by sequencing. 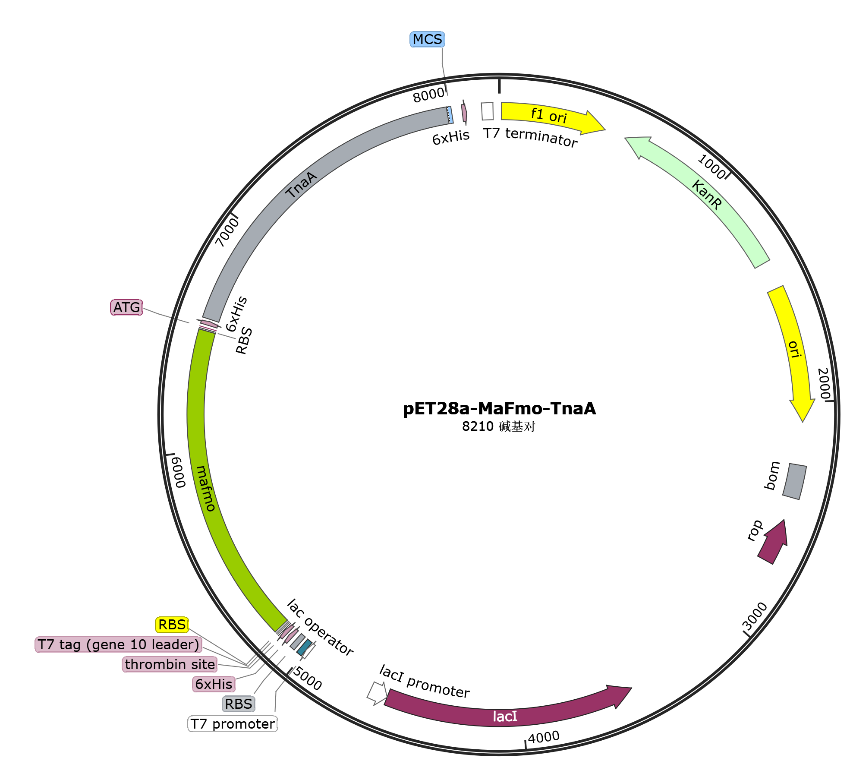 To make the system work more efficiently, we put forward a bold idea. We hope to put these three enzymes on a plasmid based on Series Connection. We choose to use a light promoter to induce Fre-linker-SttH. 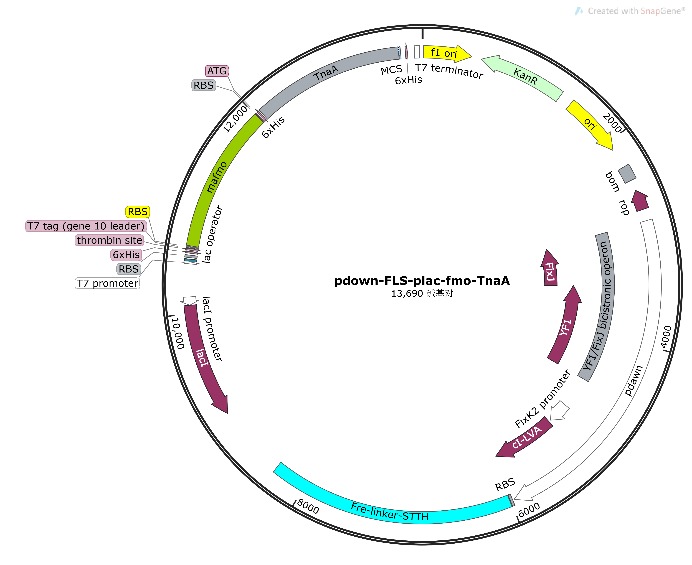 The plasmid map of our large plasmid system

Because of the COVID-19, We have not verified this system in the laboratory, but our partner SZPT-CHINA proved the feasibility of this promoter in E. coli successfully. In the next stage, we will verify it in the lab.