Our goal is to engineer a Salmonella phage genome carrying phi29 DNA polymerase gene by in vitro Tol2 transposon system. Therefore, we created Tol2 system by synthesized TPase (Tol2 transposase) gene by IDT and acquired the Tol2 transposable element from Addgene (pBSII-SK-mTol2-MCS (Plasmid #51817)) based on the sequence in Oryzias latipes (aka Japanese rice fish). The Bacillus phi29 DNA polymerase gene requested from TAS_Taipei, an iGEM team in 2020, was assembled onto Tol2 elements. We isolated Salmonella phages from Liuchuan River near our campus with phage hunting procedure and safety-related concerns which were supervised by Prof. Chih-Hsin Hung of I-Shou University in Taiwan. Then, we engineered the Salmonella reporter phages including one commercial phage λ 1105 from BCRC and two isolated Salmonella phages in vitro through Tol2 transposition in the TXTL system. When specifically infecting Salmonella by our reporter phages, the phi29 DNA polymerase was produced and triggered RCA. The amplified DNA can be measured with EvaGreen DNA-binding dye.

Our goal is to engineer a river-isolated Salmonella phage with an unknown full genome sequence. Two issues we met when we consider safety. First, Salmonella is a biosafety level 2 pathogen. Second, to edit an unknown genome sequence, we used a Tol2 transposon system that touches the GENE DRIVE issue using recombinase-like activity. Therefore, we established a cell-free in vitro transcription-translation (TXTL) system in our experiments to overcome the problems such as (1) using Salmonella extracts rather than live bacteria, (2) performing genome engineering in vitro including Tol2 transposase expression and gene insertion onto the genome, and (3) synthesizing Salmonella phage in vitro without its host (i.e., live Salmonella). In the end, we went to P2 lab under the supervision of Prof. Jan, we tested the engineered reporter phage in Salmonella diagnosis. For application, we limited the use of our product in the lab to reduce any possible risks to harm people or the environment.

In vitro transcription and translation (TXTL) is a convenient cell-free system that has increasingly been developed to apply in synthetic biology1,2. In addition to achieve biosafety level, TXTL becomes powerful in prototype characterization of genetic parts, devices and circuits. Moreover, TXTL is particularly useful to express and purify proteins which are toxic, insoluble or unstable in cell-based system.

The TXTL system not only makes safe project design, but also benefits iGEM teams in the application of synthetic biology. Furthermore, this will reduce possible risks to nothing.

A gene drive is to make a bias in the inheritance frequency that may has a particular suite of genes in an organism’s progeny. Transposase has recombinase or endonuclease activity in the transposition of Tol2 transposable element. We used the Tol2 transposase in safety concerns by the following. With these measures and rules, we think there's no or minimal risks if having any chance to harm the people or the environment.

(1) Tol2 transposase is from Oryzias latipes (aka Japanese rice fish) and has been just used in E. coli prokaryotic system.

(3) Tol2 transposable element is composed of a minimal specific DNA sequences with a 200-bp left end a 150-bp right end. The two ends or any likely similar sequences can not possibly exist in the E. coli genome. We ran BLAST on Escherichia coli strain K-12 DH5alpha chromosome (NCBI GenBank: CP017100.1) with both end sequences and found no significant similarity in the result.

(4) We used T7 promoter to drive the Tol2 transposase and generated a plasmid carrying T7-Tol2 transposase in E. coli DH5alpha where Tol2 transposase protein cannot be expressed. We never transferred the plasmid into E. coli BL21 or any cell with T7 RNA polymerase and not used in any eukaryotic cells.

(5) For all safety concerns, we applied cell-free TXTL reaction to express the Tol2 transposase and engineer a phage genome.

(6) In all lab activities, the Safety Committee in our school regulates the lab- related activity, material usage and waste treatment (e.g, all of the lab waste will be taken away by a local lab waste management company). And we followed the government lab regulation rules.

Our product is only used in the lab with its own regulation procedure based on government policy. There are a few or no risks associated with the application.

✓ E. coli/Salmonella bacteriophage λ1105 is a modified version of phage λ, widely used in genetic and physical analyses in E. coli and Salmonella. We purchased it from Bioresource Collection and Research Center (BCRC) in Taiwan.

✓ Liuchuan River-isolated Salmonella bacteriophages were isolated from Liuchuan River near our campus. The phage hunting procedure, protocol and safety-related concerns were supervised by Prof. Chih-Hsin Hung of I-Shou University in Taiwan. As his comments, he thought there's no problem to deal with the phages isolated from a river based on his experience.

All organisms we used at Biosafety Level 1 don’t pose a threat even if they escape from the lab. These organisms can't directly cause any disease to humans under general circumstances and present minimal hazard to the environment.

✓ Salmonella Typhimurium LT2 was obtained from Prof. Cheng-Yang Huang and operate all the related experiments at P2 laboratory of Prof. Ming-Shiou Jan. The two professors are both in Chung Shan Medical University in Taiwan. We didn't take Salmonella out of the lab from the University. And we are supervised by them or their senior doctoral students.

Salmonella is associated with human diseases such as diarrhea, fever, abdominal cramps and vomiting that are developed within 8 to 72 hours after contaminated meals or water were taken.

Function: the Tol2 transposase to drive transposition of Tol2 elements

Usage: to modify phage genome through Tol2 element and TPase

Usage: to modify phage genome through Tol2 element and TPase


Risks of the Manipulation

All chassis we used won't pose a threat even if they escape from the lab. These chassis can't directly cause any disease to humans under general circumstances and present minimal hazards to the environment. Our engineered phages might enter the environment accidentally. As mentioned, the product is only used in the lab, therefore, just as doing on E. coli and recombinant DNA, the regulation is monitored by the safety committee and the government.

We cultured bacteria of E. coli strains in a laminar flow clean bench throughout the whole process of gene cloning and protein expression/purification. The phages we handled are considered as BioSafety Level 1 by BCRC in Taiwan and a phage expert, Prof. Chih-Hsin Hung of I-Shou University. We also isolated and manipulated the phages with the procedure provided by Prof. Hung. With regard to Salmonella Typhimurium LT2 at BioSafety Level 2, we performed all of the related experiments at P2 laboratory of Prof. Ming-Shiou Jan at Chung Shan Medical University in Taiwan and conducted the experiments under the supervision of him or his doctoral students. We engineered phage genome and packaged the recombinant phage in the cell-free TXTL system to prevent use of live Salmonella cells. And all of the waste from the lab was disinfected by an autoclave sterilizer and transported away by a local lab waste management company.

We have our own biosafety committee, which consists of two research teachers. They oversee proper work area conditions by checking on disposal of Petri dishes and liquid wastes, sanitation, and teaching proper laboratory techniques. Our guidelines, taken from bio-risk management posts on the website of CDC Taiwan, cover lab safety policies and procedures ranging from lab-specific rules to behavior. For example, we prohibit food, open-toed shoes, and drinks in the lab. We also have a thorough clean-up procedure. For example, we have waste bins for used tips, which are autoclaved before disposal, and liquid wastes are bleached. Teachers acquaint us with all experiment techniques. Moreover, he is also highly familiar with iGEM owing to years of experience as the instructor of the iGEM team of our school.

The main regulations regarding bio-safety and bio-security, including biosafety inspections of high-containment laboratories, biosafety technical specifications and guidelines, biosafety education and training, bio-risk management post on the website of CDC Taiwan. See the guide book and the related documents here

• Biosafety equipment (such as biosafety cabinets)

• Dual-use and experiments of concern

• Accident reporting procedure including emergency phone number and the instructor who is in charge.

All personnel received a tour around the lab and were informed of the rules upon entering the lab, the main rules include:

1. No running or sudden movements in the lab.

3. All experiment waste must be thrown in a designated bin, which will then be put through a machine for sterilization.

4. All pipettes must be sanitized after use.

6. Experiments can only be performed with gloves and lab coats on.

7. All personnel must wash their hand upon entry into the laboratory and wear suitable clothing. 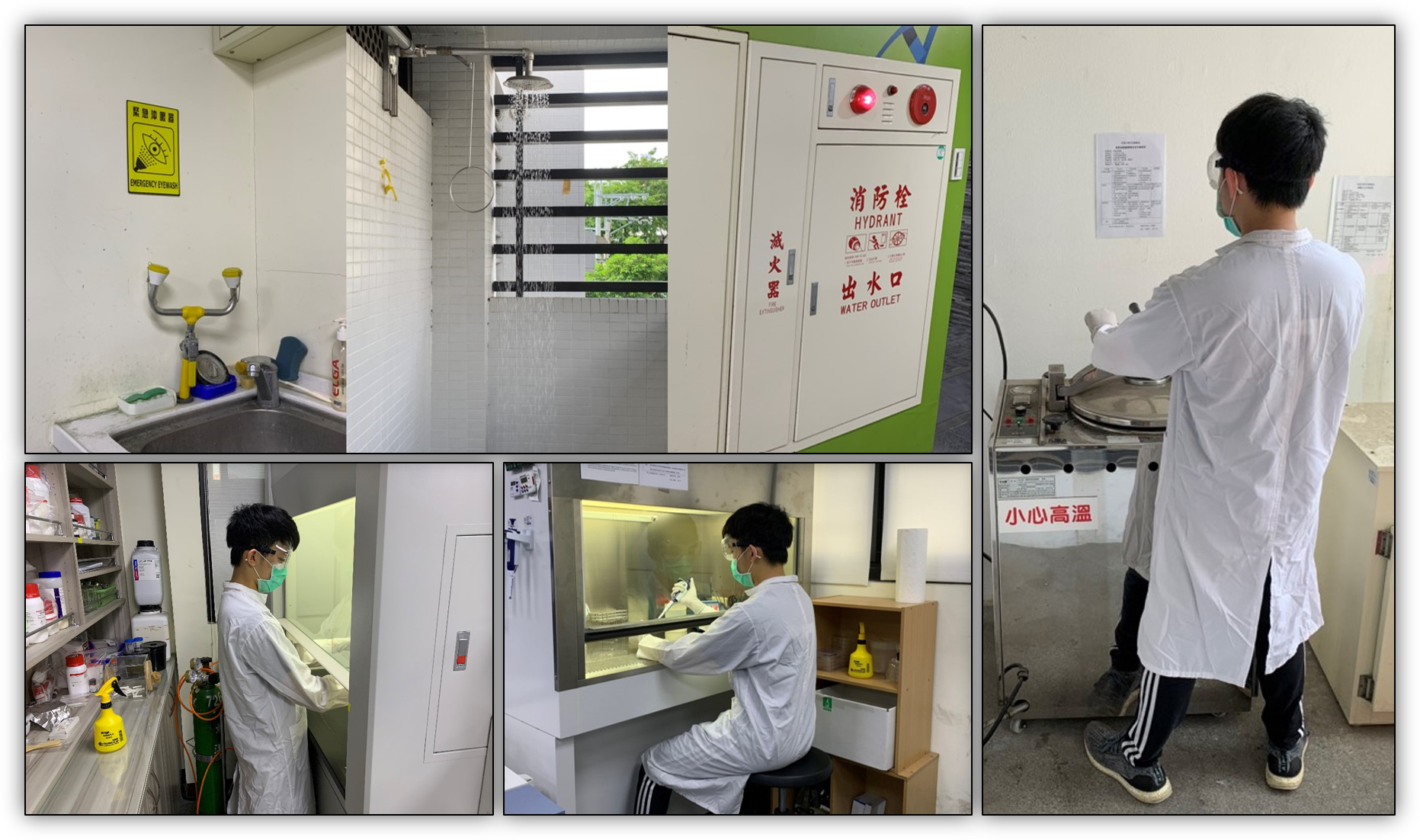