PURPOSE OF THE MODEL

The goal of our project is to develop a pathogen diagnostic tool based on phage typing with a faster detection time than conventional methods. When using our product, deSALMONEtor (aka Salmonella detector), there’s a step in which the user must wait for the mixture of His-phi29 phage and the specimen to interact. The phage will infect the bacteria and inject its DNA that lets the bacteria produce phi29 DNA polymerase. It is expected that after a period of time, the infected cell will burst, and the phi29 DNA polymerase produced will be released. The recombinant polymerases will then be used in the rolling circle amplification (RCA) process.

The issue here is that how long should the user wait. To find the optimal time for phage-bacteria interaction is a critical step. Mathematical modeling is a very useful tool to describe the relationship between the variables of interest for the researchers under a possibly varying environment. Therefore, the modeling provided as an important tool for our project, in which a crucial variable that strongly affects the result may change under different experimental conditions.

The key objective is to find how long the bacteria would burst (latent time) to release the recombinant enzymes (i.e., phi29 DNA polymerase). And the core independent variable that we would like to investigate in relation to the latent time is cell density.

According to the research by Abedon, et al., they found that to maintain the high productivity of a phage (burst size), the phage may compromise the latent time (called a tradeoff) to achieve the highest phage production in one generation1. And the productivity decreased at a constant rate with time post infection.

In our case, cell density varies greatly from specimen to specimen and may greatly affect the latent period. We would like to use mathematical modeling to simulate the optimal latent time for our Salmonella detection using a reporter phage carrying phi29 DNA polymerase gene.

Based on the Abedon’s research, the relationship between burst size and optimal latent period in a phage infection at low MOI (i.e., under MOI=1) is modeled with an equation as stated in Equation 1.

In which B is the burst size of phage (PFU per infected cell), R is the intracellular rate of phage progeny maturation, L is the latent period time (min), and E is the eclipse period time (min). The value of (L-E) is defined as a time for phage maturation. The D was utilized as a constant parameter according to Wang’s assumption, referring to a decline of phage productivity with time in the interaction between phage synthesis and host cell machinery2.

Based on the experimental data and researcher’s experience, the value of D provided as 0.001 by Wang2 was used for most phage-bacteria interactions in many papers including Equation 1 given by Abedon1. Therefore, we also adopt this constant value (D=0.001) into our model.

To verify the latent time (L) and the burst size (B), we conducted an experiment of phage infection to Salmonella bacterial cells at a cell density of 105 cells/ml by our isolated engineered Salmonella phage #ST1::phi29 at MOI=1 in the LB broth. The lysates were collected by an interval of 5 min until 60 min, and subjected to plaque assays on LB agar plates. As Fig. 1 demonstrated, the phages were released at around 40 min (latent time, L) to a plateau level with an average phage production of 98.4±14 PFU per infected cell (burst size, B). 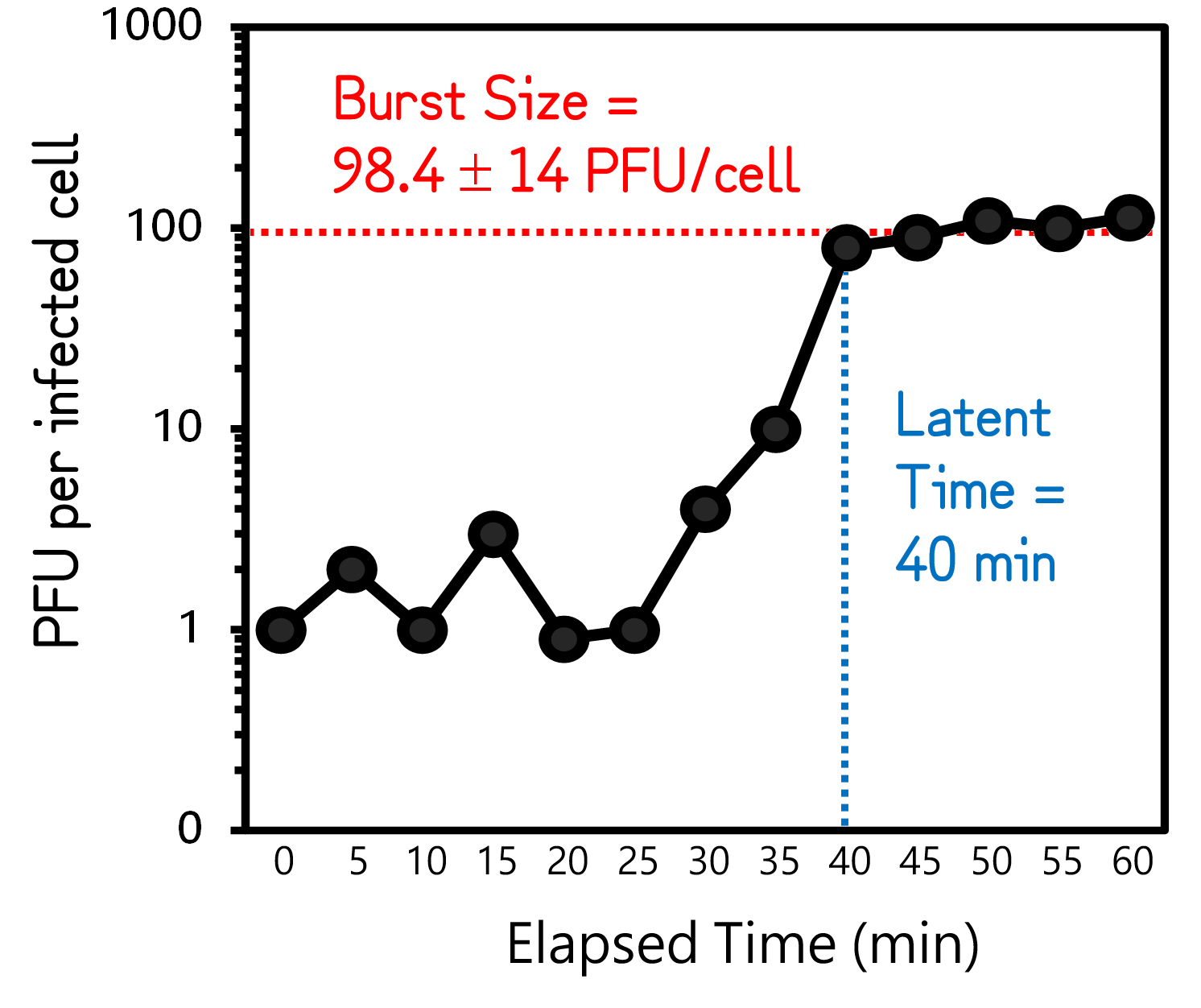 Figure 1 |The phage production (PFU per infected cell) of Salmonella infection in relation to the elapsed time (min). Salmonella bacteria at a cell density of 105 cells/ml were infected by the phage at MOI=1.

For the value of E, the time of the eclipse period, it is difficult to measure E in terms of various cell densities in our experimental setting, especially as low as 1-100 cells that were usually seen in a contaminated source. In a study by Young Choi et al., the eclipse period time (E) for a Salmonella-specific phage is 10 min and the latent time (L) is 25 min3. In another paper by Carey-Smith et al, an isolated Salmonella phage from sewage acquired E for 38 min and L for 50 min4. The value of L-E is consistently given by around 15 min from independent studies and Salmonella phages. In addition, based on Abedon’s modeling1, the phage maturation time (L-E) is set as a constant for a type of phage even in the interaction with its host in different environments. This helped us assume the value of phage maturation time (L-E) for our isolated Salmonella phage is 15 min. Based on our experimental data (Fig.1), L was obtained as 40 min, then E was calculated as 25 min.

R is defined as an intracellular rate of phage progeny maturation by Abedon et al1. It was speculated that the rate (R) varies majorly depending on the culture medium where the bacteria grow and a related phage has similar values of R in the same culture condition. That implies R should remain constant (or close to constant) for an interaction between a specific phage and its host bacteria in a similar environment. R is defined by Abedon et al. in Equation 2 below. Applied the burst size (B) of 98.4±14 PFU per infected cell in our experimental data (Fig. 1) and the constant phage maturation time (L-E) of 15 min to Equation 2, we got the value of R as 6.56±0.93.

It turned out the Equation 3 by substituting all the constants and the calculated parameters from the model (Equation 1) describing the relationship between burst size (B) and optimal latent time (L) for our engineered phage to Salmonella in a given growth condition.

We have collected a set of our experimental data involving burst size (PFU per infected cell) in relation to cell density (cells/ml) (Table 1). By inputting each value of the burst size into the equation, we can get a set of data presenting optimal latent time (min) in relation to a given burst size.

Applied the given cell densities to the corresponding set of predicted latent time, the trend curve was generated in Fig. 2 to describe the optimal latent time as a function of cell density (Equation 4). The simulation suggested that as cell density increases, burst size also increases, resulting in increasing latent time. Based on the study of James Bull et al.5, this phenomenon is consistent with their data that can be clearly explained by the effects of environmental factors, in which extracellular polymeric substances (EPS) synthesized by microorganisms in the environment may cause more phage production (burst size) in a dense bacterial population. In other words, as burst size increases in a given cell density, the phage appears to be spreading to less protected areas and result in greater loss of phage production, which can be overcome by more cell densities. This implies that to increase burst size by a phage needs a longer optimal latent time to protect itself to prevent from loss in a given cell density. That is more cell densities could produce more phages (burst size) only in a longer latent time with the a gradually declining efficiency of phage production (burst size) with time. The constant rate (D) in terms of (latent) time was given by Wang’s study in Equation 1. These conclusion and inference explain the independent experimental findings and the reasonable mathematical modeling including our observation in our own experiments and modeling. 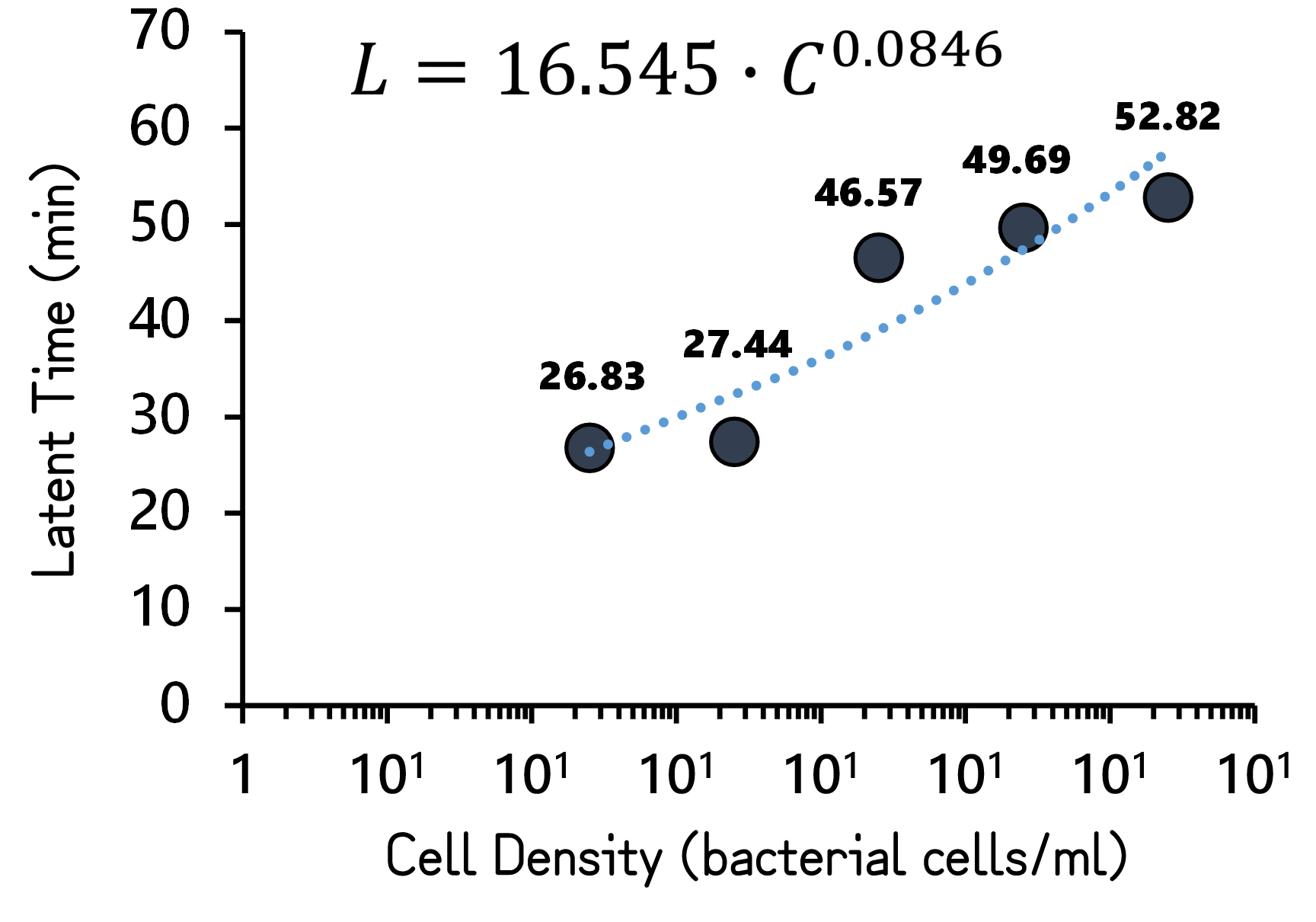 Figure 2 |The exponential modeling of the optimal latent time as a function of cell density.


Finally, we got Equation 4 for an exponential model of the optimal latent time by a phage as a function of cell density based on our experimental data of burst size of our isolated engineered Salmonella phage infection on Salmonella.

where L represents an optimal latent time (min) and C refers to a cell density (cells/ml).

This model was examined using our experimental data of RCA and plaque assays with phage-infected cell lysates at an interval of 5 min to 60 min. Under 105 cells/ml of Salmonella infected by the phages at MOI=1, you can find the RCA signals began to sharply increase at 35 min and become the maximum at around 45 min (Fig. 3). The time is extremely close to the optimal latent time of 43.81943 min predicted by our mathematical model (Equation 4). In addition, the Fig. 3 also showed the burst size in relation to the latent time, pointing out the time for RCA should be around the end of the latent time (40 min). Altogether, the optimal time to collect lysates for RCA was predictable by our model and verified in our experiments. 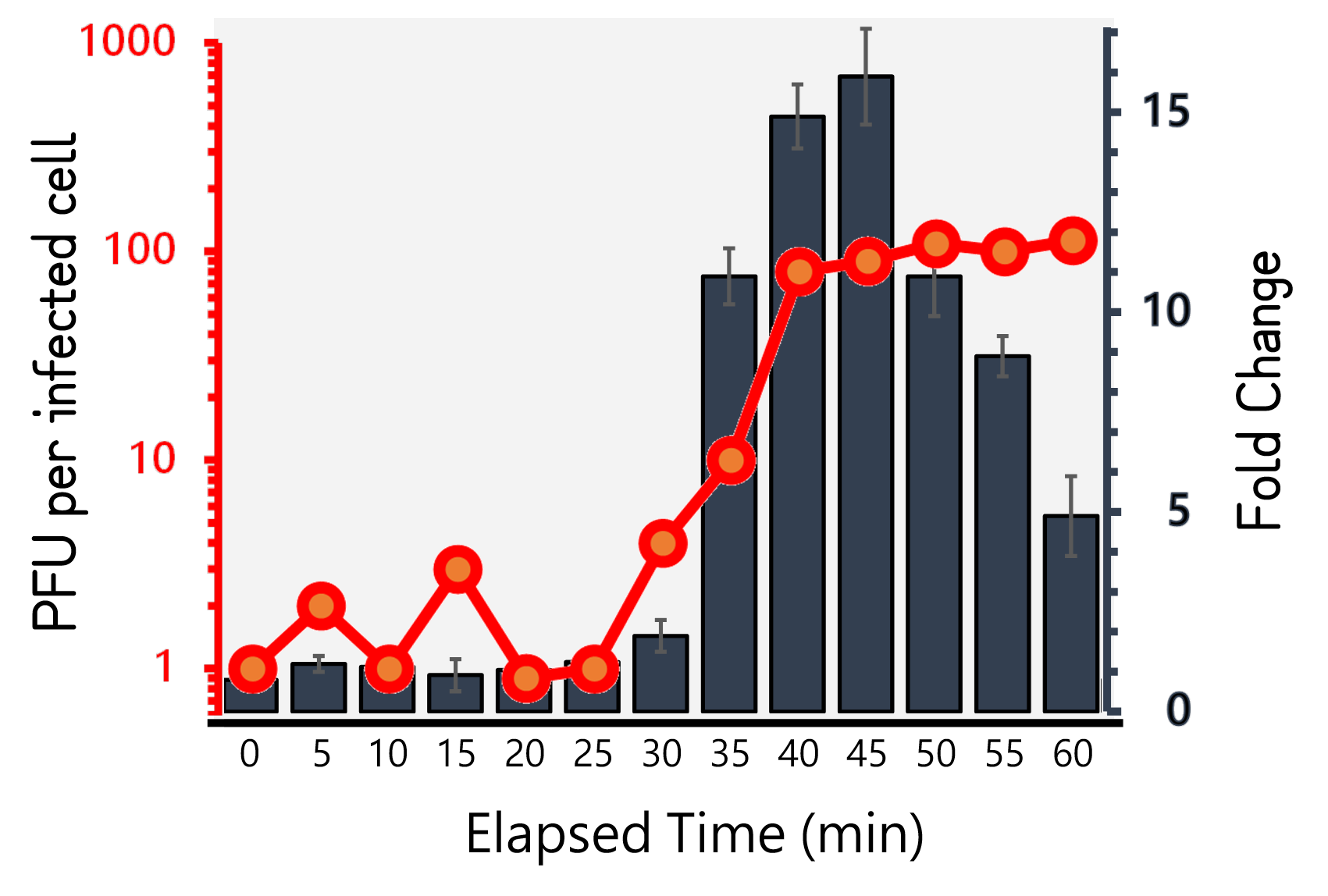 Figure 3 |Salmonella phage #ST1::Ф29 latent time (min) and burst size (PFU per infected cell, the left Y axis) and the relationship to RCA assay (fold change, the right Y axis). 105 cells/ml of Salmonella were infected by the phages at MOI=1. Phage-infected Salmonella lysates were harvested for 1 hour at an interval of 5 min. The lysates were subjected to plaque assays and RCA reaction followed by stained with EvaGreen dye. The burst sizes were counted by numbers of plaques. The RCA signal were read at Ex/Em=500/530 nm and divided by the background level without phi29 DNA polymerase.


For the application in a real situation (i.e., food poisoning), the pathogen exists at very low cell density (1-100 CFU/ml). Therefore, it’s a good time to test our model to simulate the optimal latent time for low cell densities that are impossible to be measured for the latent time and burst size of a phage. 16.545 min and 24.427 min were predicted by our model (Equation 4) for 1 and 100 CFU/ml of bacteria, respectively. We mimicked the food poisoning in terms of cell density by adding 103 to 107 cells of Salmonella in a beaker of 500ml water (equals to 2-2x104 cells/ml) and prepared the water without bacteria as a control. After 25 min post infection by phage::Ф29 at 200 PFU/ml, the lysates were harvested and enriched by our device (see our HARDWARE page), followed by RCA assays. The Fig. 4 showed the results of RCA signals from different cell densities and the limit of our reporter phage on Salmonella diagnosis, demonstrating the optimal (latent) time for collection is predictable by our mathematical model. 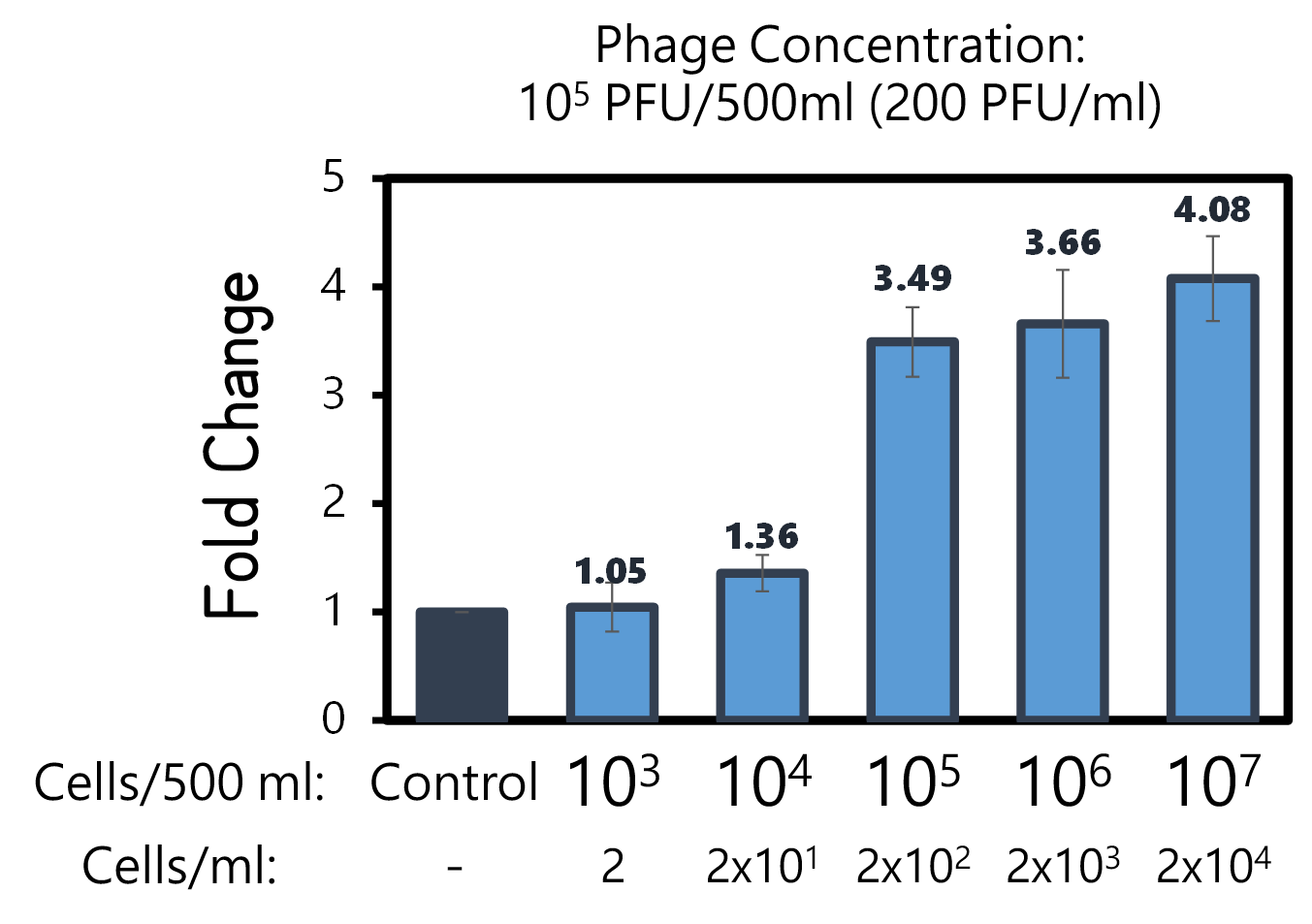 Figure 4 |Salmonella test at various concentrations between 2-2x104 cells/ml in 500ml water with engineered Salmonella phage carrying His-phi29 DNA polymerase gene at the concentration of 200 PFU/ml. The lysates were collected at 25 min post-infection, a time predicted by our model. RCA was performed on the embedded Ni-column in a 3D-printerd Luer lock adapter. The amplified DNAs were stained with EvaGreen Dye and measured at Ex/Em=500/530 nm in a microplate reader (BioTek Synergy H1).

With the use of modeling, we are able to find out the required waiting time for the user’s specimen to get ready for RCA. This not only solves an important issue in the design of our product, but also considers all the possible conditions. It is theoretical and practical, we examined the model with our experimental data. Here, we present a quite reliable solution that we can implement.

Although our model successfully helped us figure out the optimal waiting time, it is undeniable that some specimens may be collected from different sources that ultimately result in the difference of phage-bacteria interaction. This is an issue, since during our modeling we assume that the culture media and growth condition are similar. Therefore, it is a possible direction in which we may investigate in the future. This extension will improve our product by increasing the accuracy through adaptation to different collection sources.