Communication is an essential process of iGEM since it’s all about communicating your ideas, your experiment, and your opinions to all sorts of people no matter if they are a part of iGEM or not. It’s all about spreading the enthusiasm for synthetic biology. We couldn’t think of a better way to spread our enthusiasm by using a board game as our material, material design was our main focus for both communication and a part of education. We designed a board game on the topic of bacteriophage modification. It is designed to educate the public on how bacteriophage helps solve problems around the world (in short, each player is playing as a bacteriophage, trying to find a matching DNA to solve the crisis given). It is an interesting way for people to learn how bacteriophage works and, most importantly, as they slowly realize how powerful a phage can be when facing all the global issues, it turns into a game that evokes their passion for synthetic biology, changing people’s view on synthetic biology. We even brought this game to elementary schools to teach children about synthetic biology, and we also took this material with us to present at the National Museum of Natural Science, influencing hundreds of audience on the importance of synthetic biology.

The material we came up with, as mentioned, was a board game. When communicating with others, it is crucial not to be too restricted and too purposeful. Taking another interesting and attractive method might be an easier approach to deliver the message, and board games fall directly in this category. Since our experiment was all about engineering a bacteriophage to combat the problem of salmonella, we focused on communicating the importance and the positive impacts of bacteriophage, educating the public what it is and what it does. Therefore, the topic for our board game also resolves around bacteriophage. 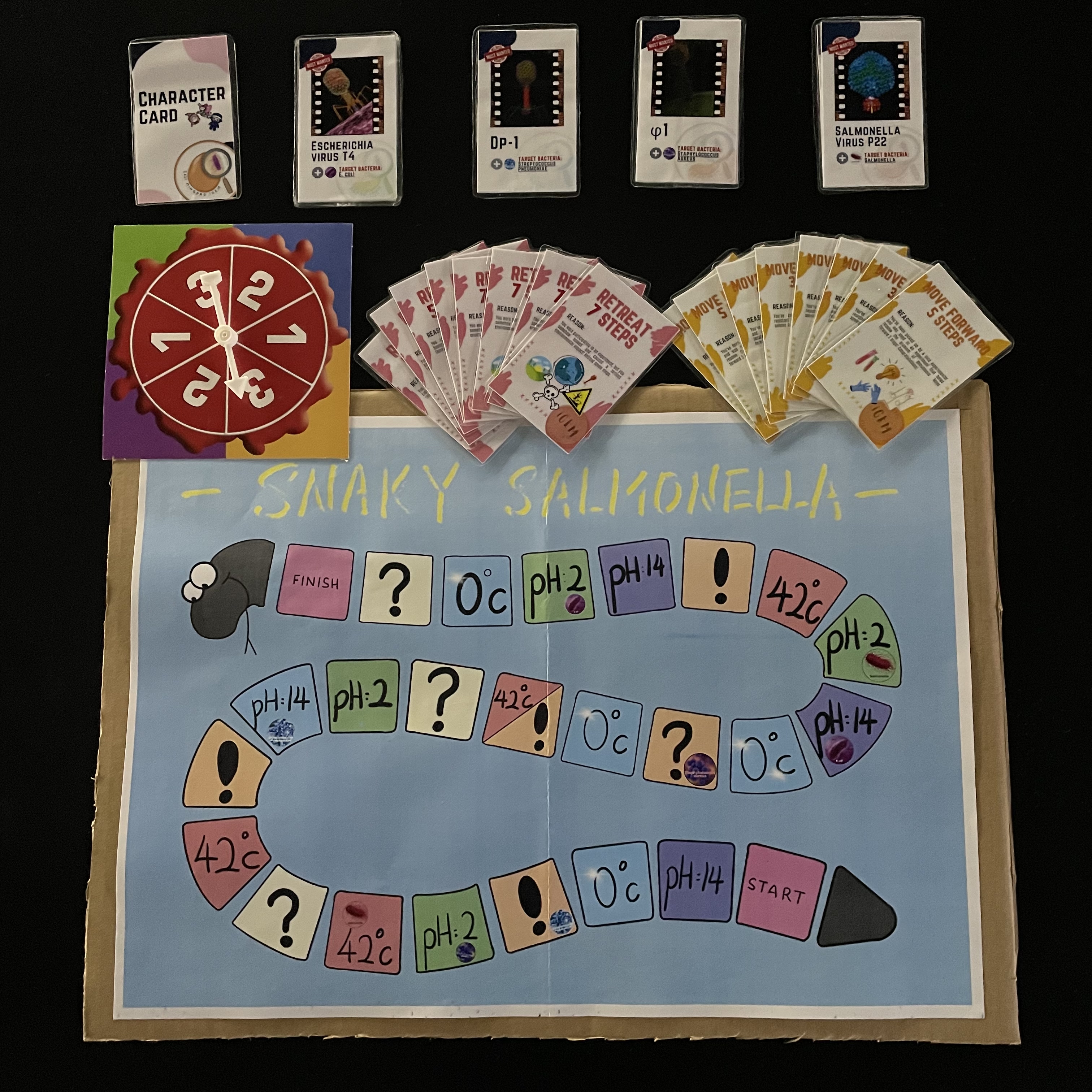 The players will each play a specific type of bacteriophage, competing against each other to see who gets to the end point first. There are four characters in this game, they are “Salmonella Virus P22,” “φ1,” “Dp-1,” and “Escherichia virus T4.” Each of them will have different advantages in the game.

3. Dp-1 is corresponding to Streptococcus pneumoniae, a bacteria that leads to pneumonia. Same, the player with this phage will gain advantage once he/she encounters Staphylococcus aureus.

4. Escherichia virus T4 is corresponding to E.coli, a bacteria that sometimes leads to bad stomach cramps, vomiting, and diarrhea. Similarly, the player with this phage will gain advantage once he/she encounters E. coli.

Deeply inspired by Snakes and Ladders, a common board game that requires players to roll dice to determine how many steps they go; when encountering ladders, you move up; when encountering snakes, you go back down. However, for our game, there’s a twist to it, there are no snakes, meaning there are no routes going down. The entire path, from the starting point to the end, is sought to be the life of a bacteriophage.

But here’s another twist, we incorporated another classic game, Monopoly, to our board game. Each block on the path will be characterized into specific functions. There are four types of block on the board. If you land on any of the blocks, there will be corresponding consequences.

1.Chance: If you land on blocks like this, you’ll have an opportunity to draw one Chance card from the Chance deck. The card will imply a scenario, in which your bacteriophage is a part of. There will be a positive consequence followed by the scenario, allowing you to move forward some steps, giving you extra advantage. For example,”You’ve been picked up by an experimenter to conduct an experiment that helps solve the problem of salmonella infection; move forward five steps.” Through these cards, players will start to realize how great of an impact bacteriophage can cast on the world, solving all sorts of issues. 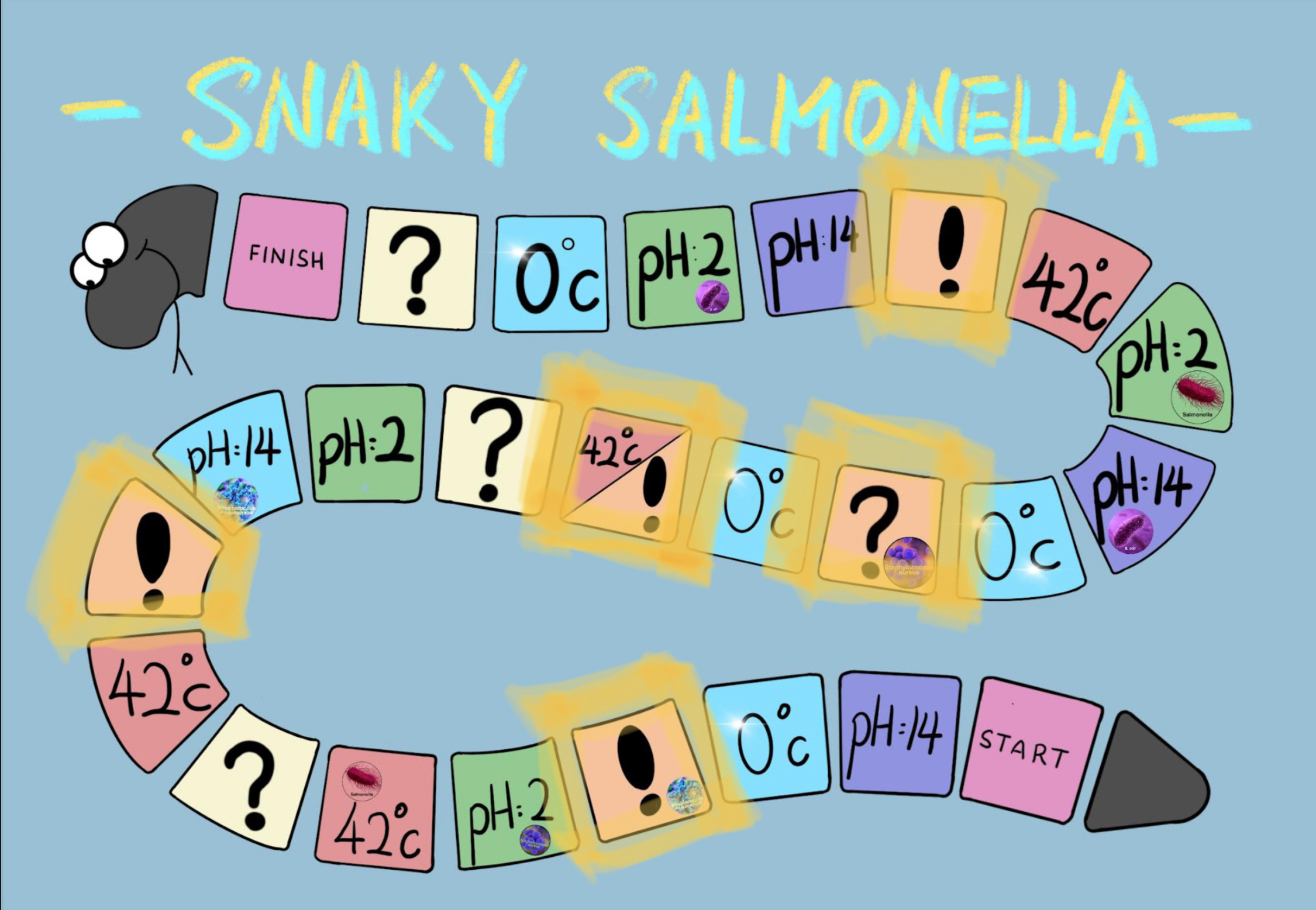 2.Event: Similar to Chance, you will have to draw an event card from the event deck after you land on it. What’s different is that Chances will no doubt have positive outcomes, but events will have both positive and negative outcomes, meaning it might give you a disadvantage, forcing you to retreat some steps. For example, “You were participating in an experiment, but you somehow leaked and caused a serious environmental impact; retreat seven steps.” Through these cards, people will be able to understand some possible disadvantages of bacteriophage, because after all, we couldn’t only teach them the positive side of phage since we were supposed to educate them holistically. 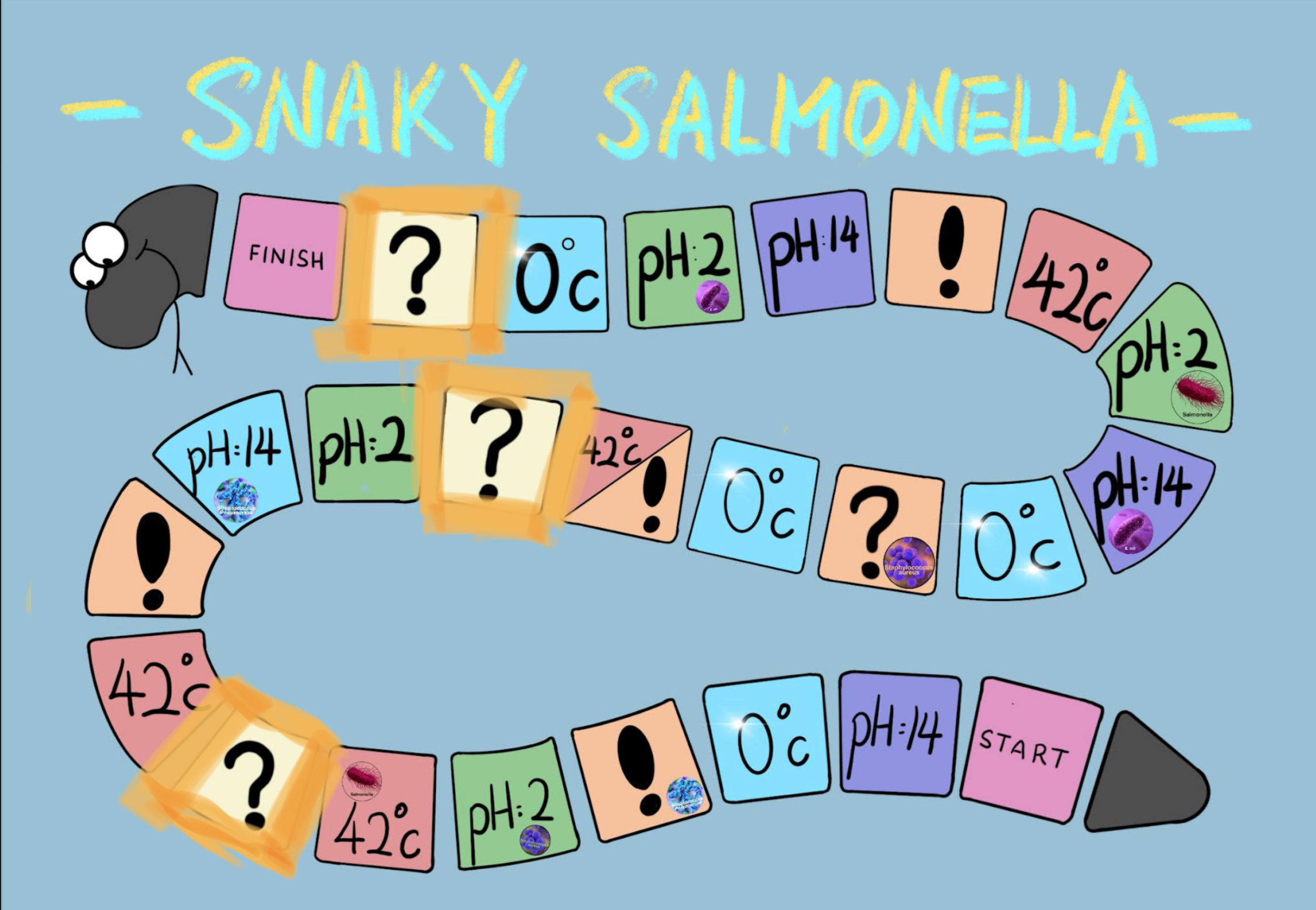 3.Temperature: If you walk on these blocks, you will have a possibility to either remain at your current block, or retreat five steps. The reason for retreating is because bacteriophage can only survive in certain temperatures. If the environment exceeds 40° Celsius or drops below 20° Celsius, there’s a large possibility for the bacteriophage to die. There will be 4 blocks of temperature change on the map: 3 blocks will have temperatures out of the suitable range, meaning you will have to retreat five steps; while there’s only one block with a temperature at the right level, which the player doesn’t have to move. THis teaches people about the optimal temperature and living environment for bacteriophage, giving them sufficient background knowledge. 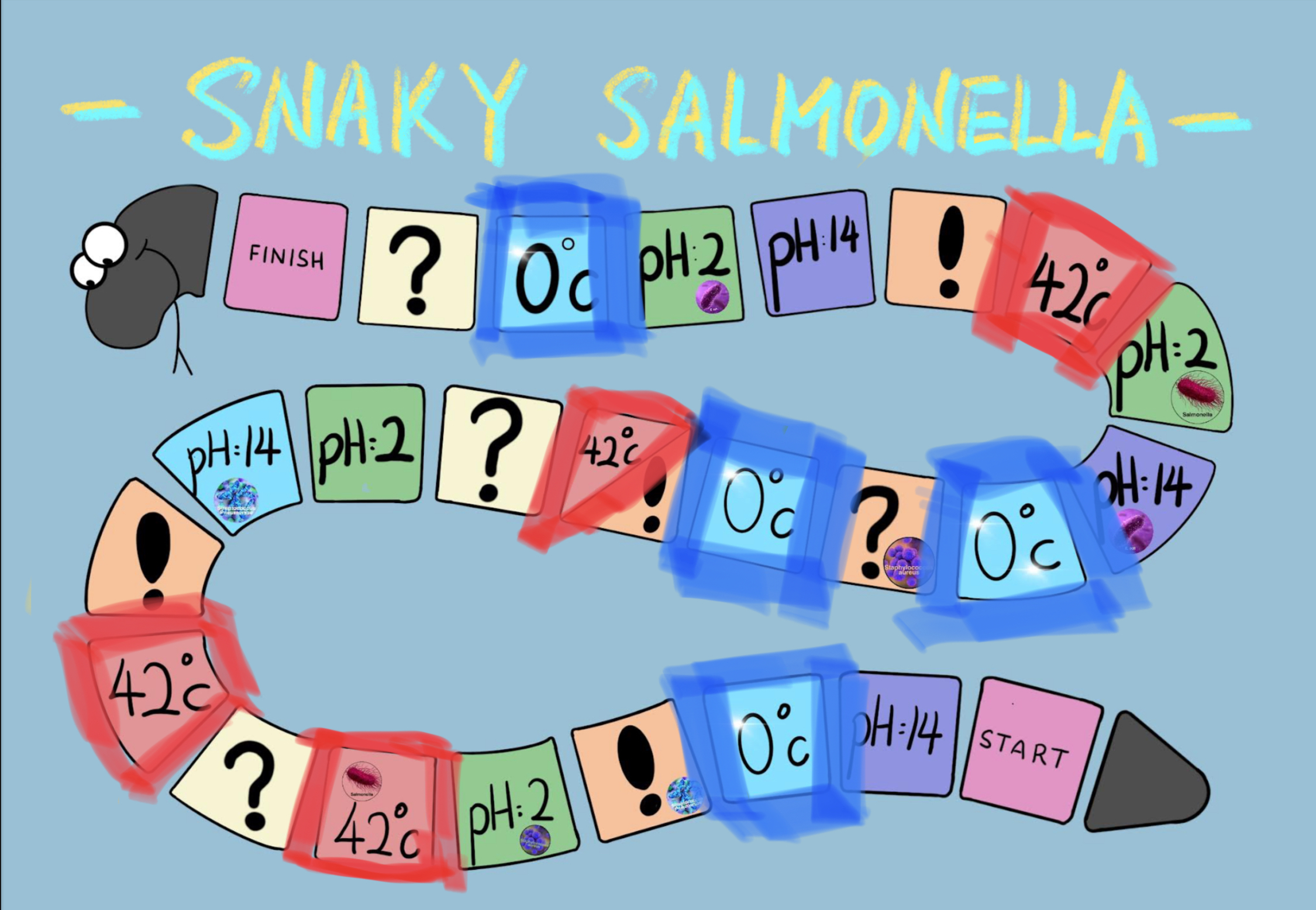 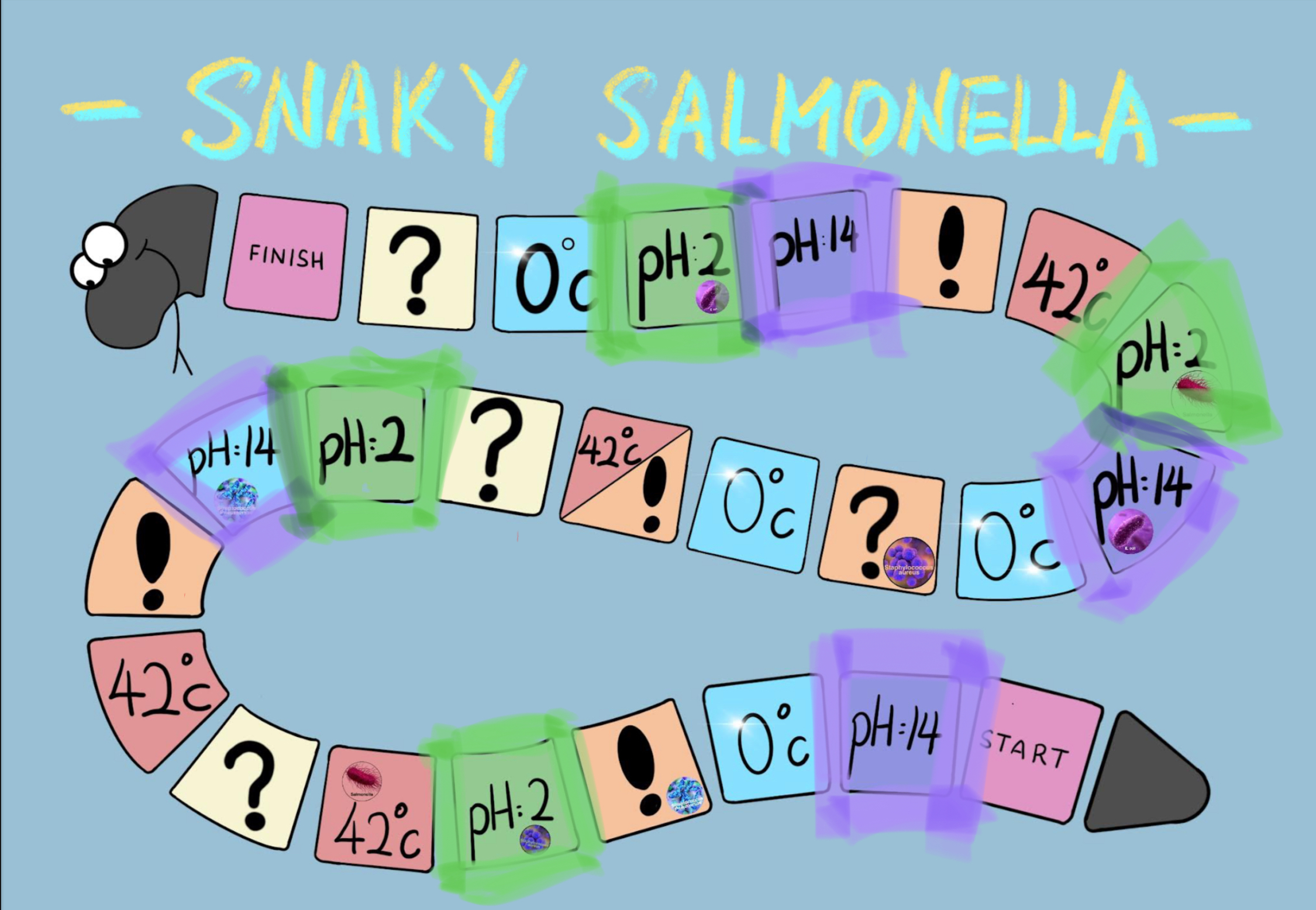 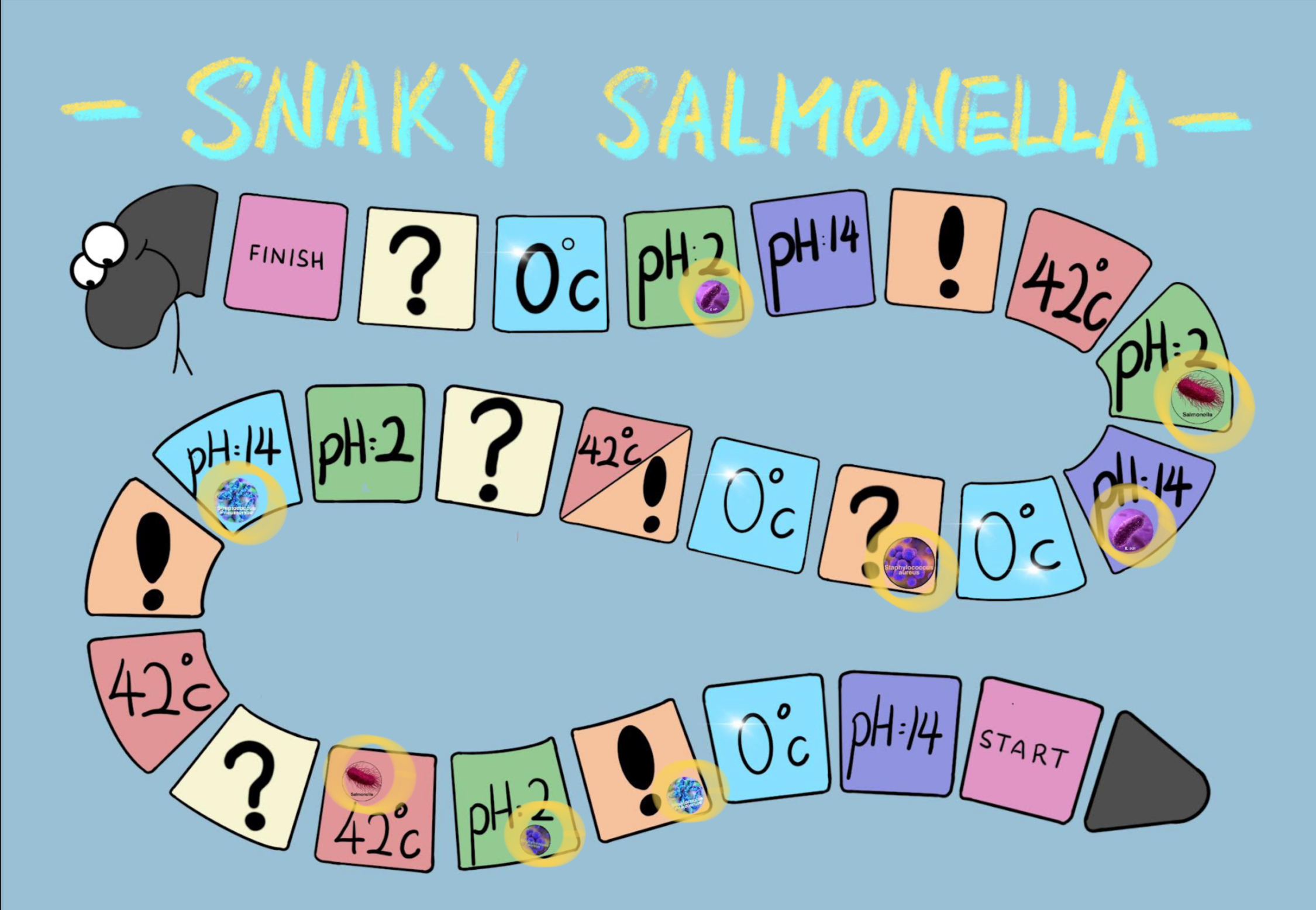 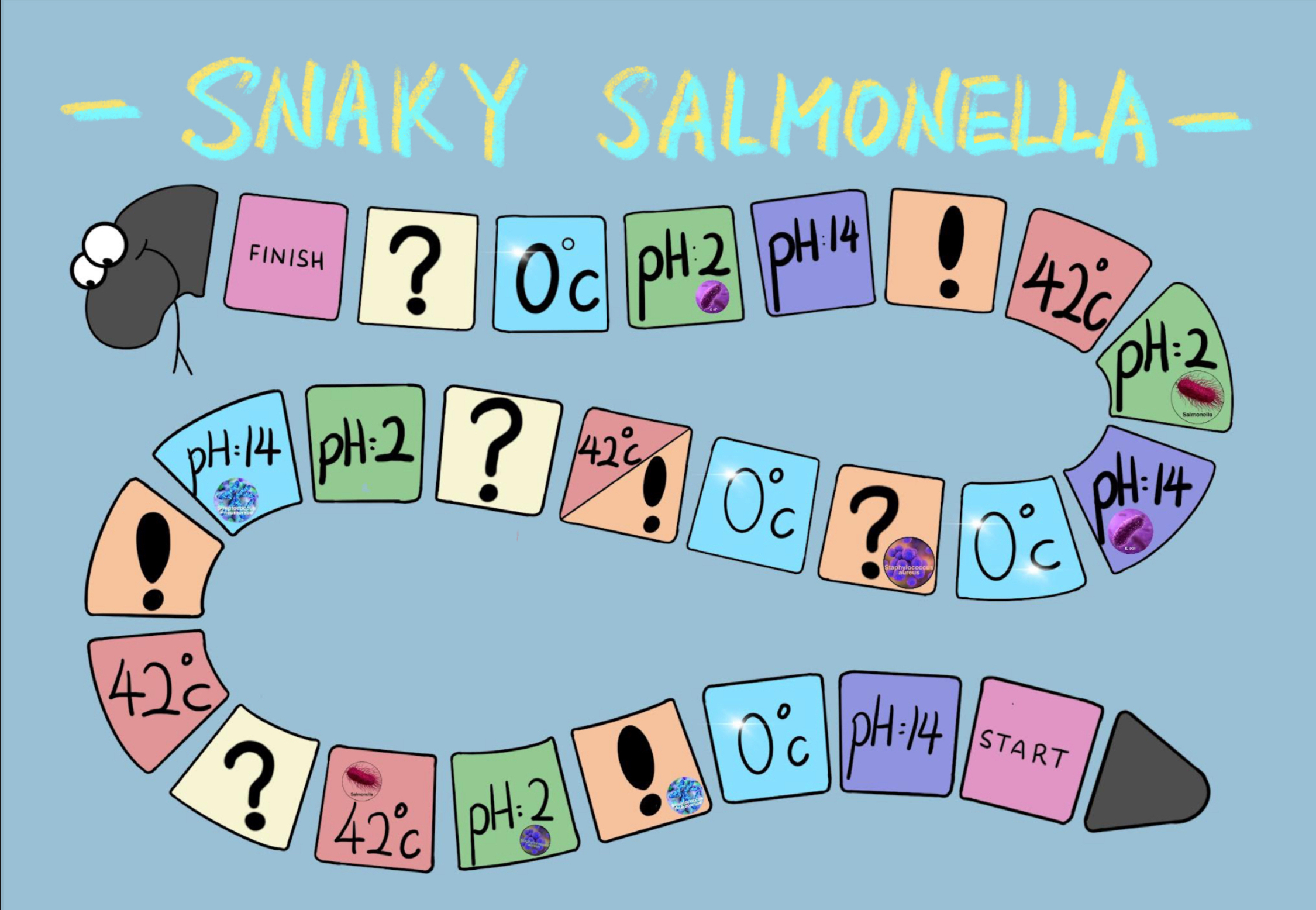 a. Chance cards: Explained previously in Board design 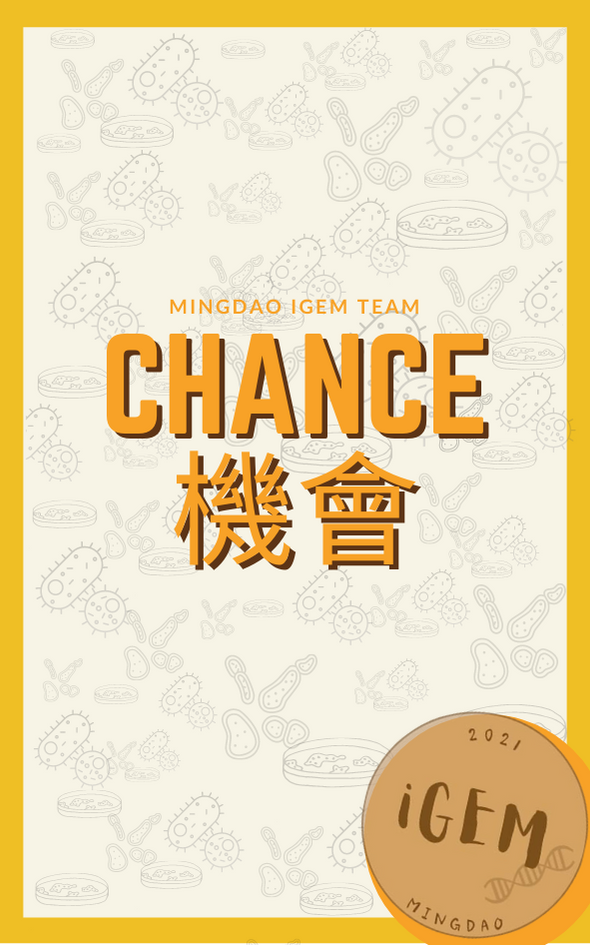 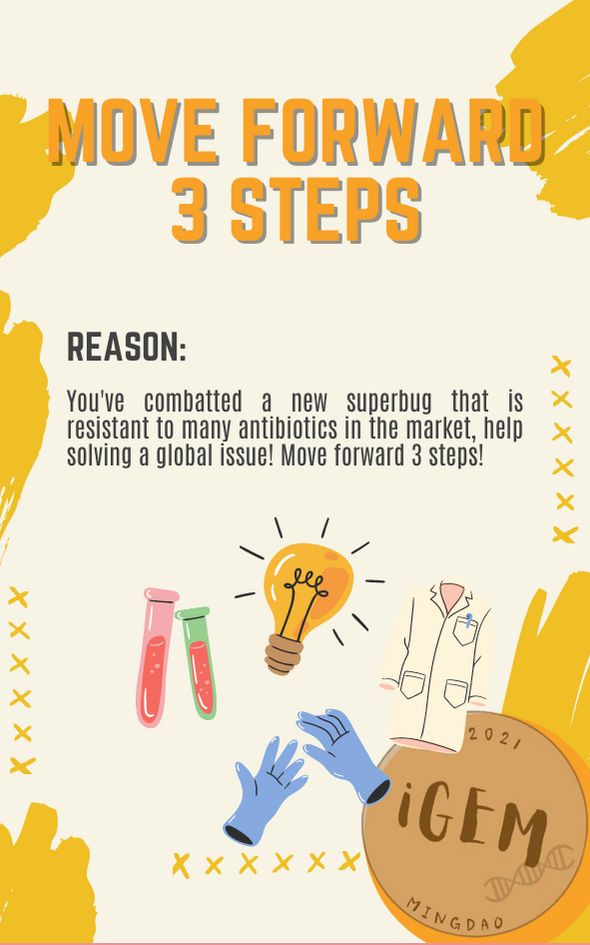 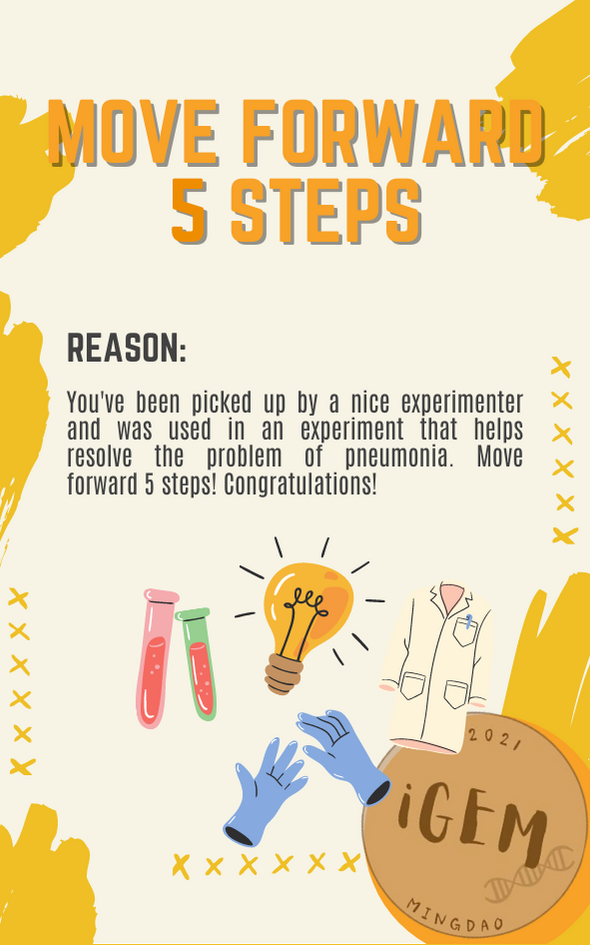 b. Event cards: Explained previously in Board design 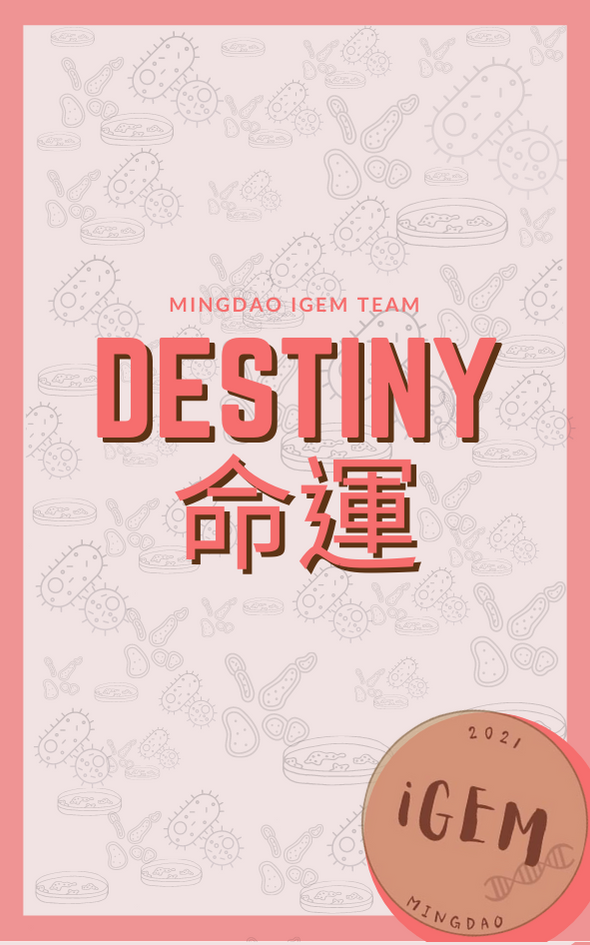 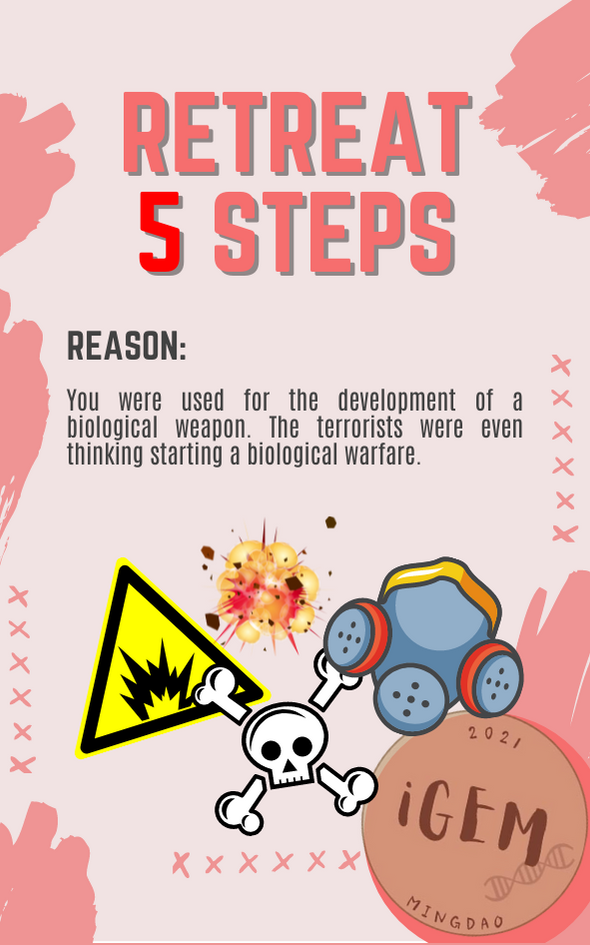 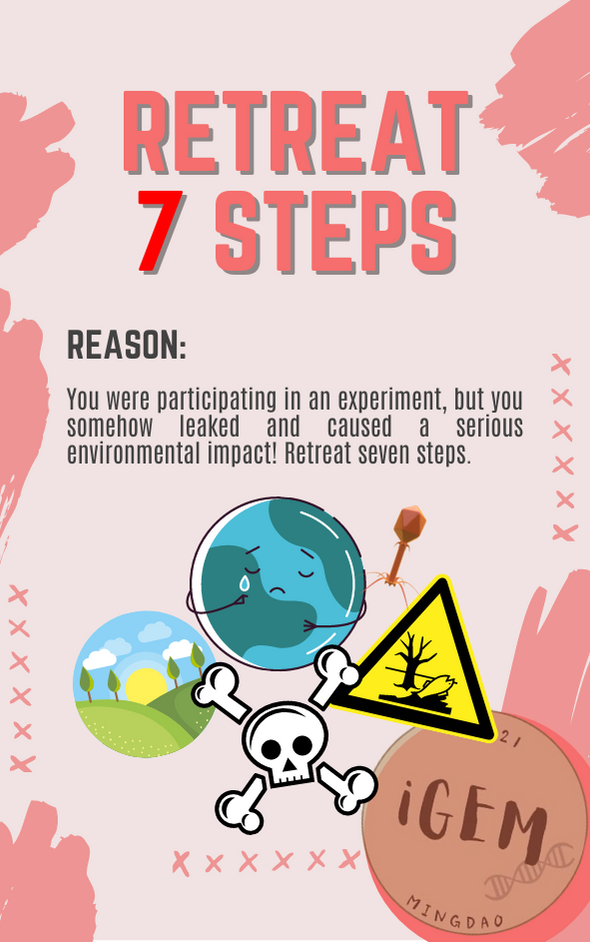 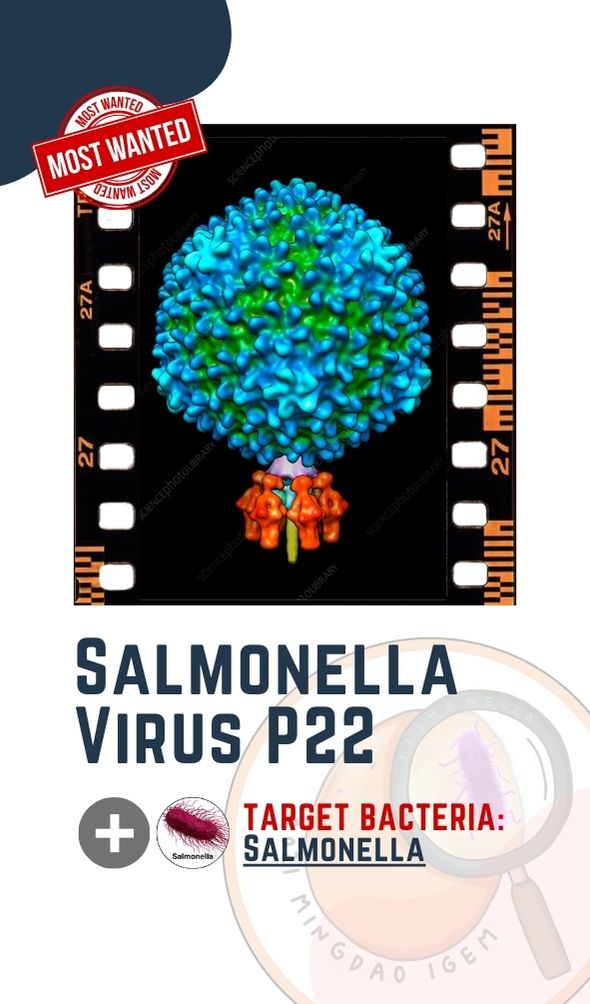 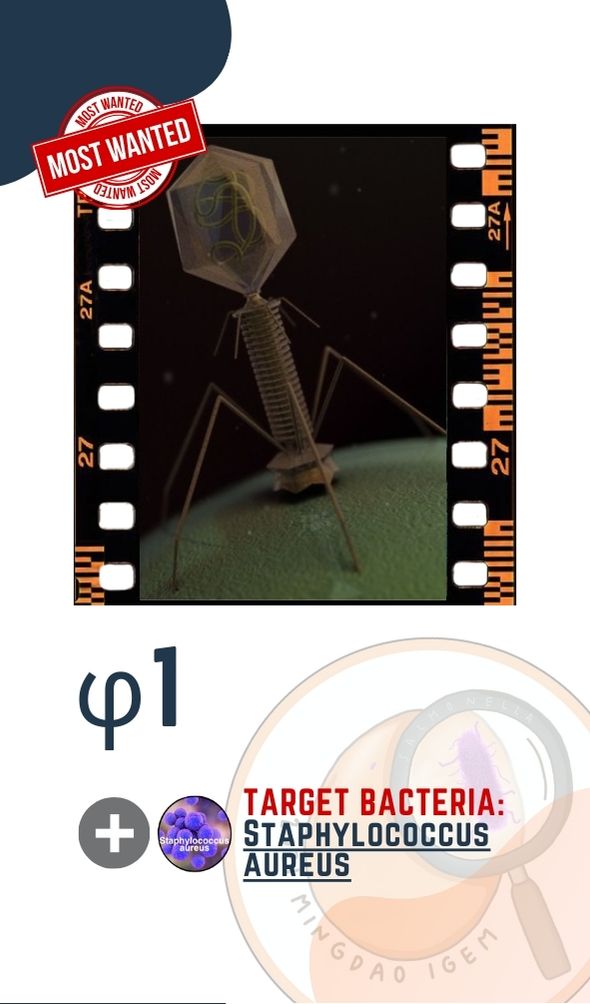 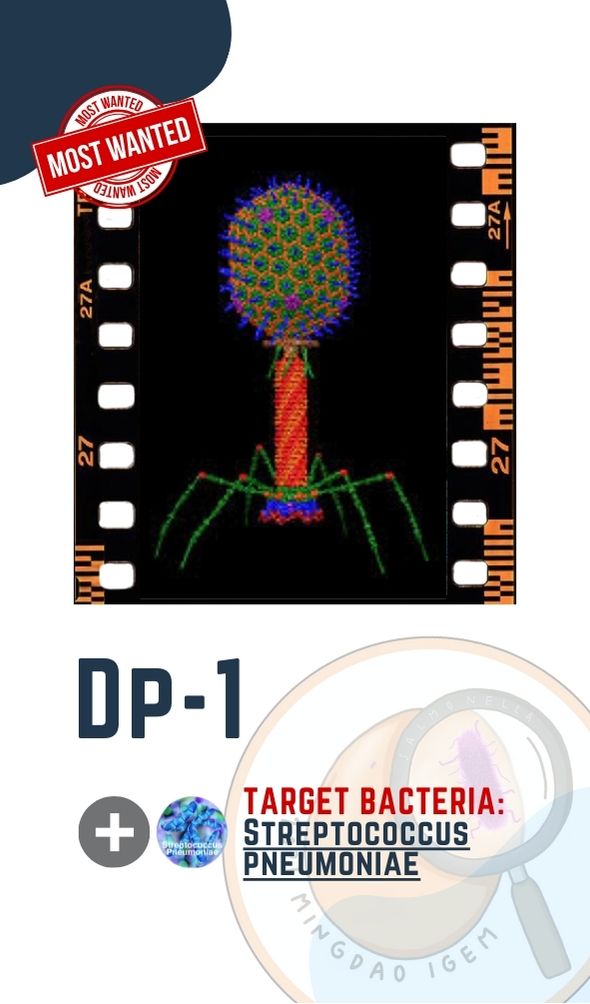 3. Character chess piece: A representation of the bacteriophage you’ve picked. 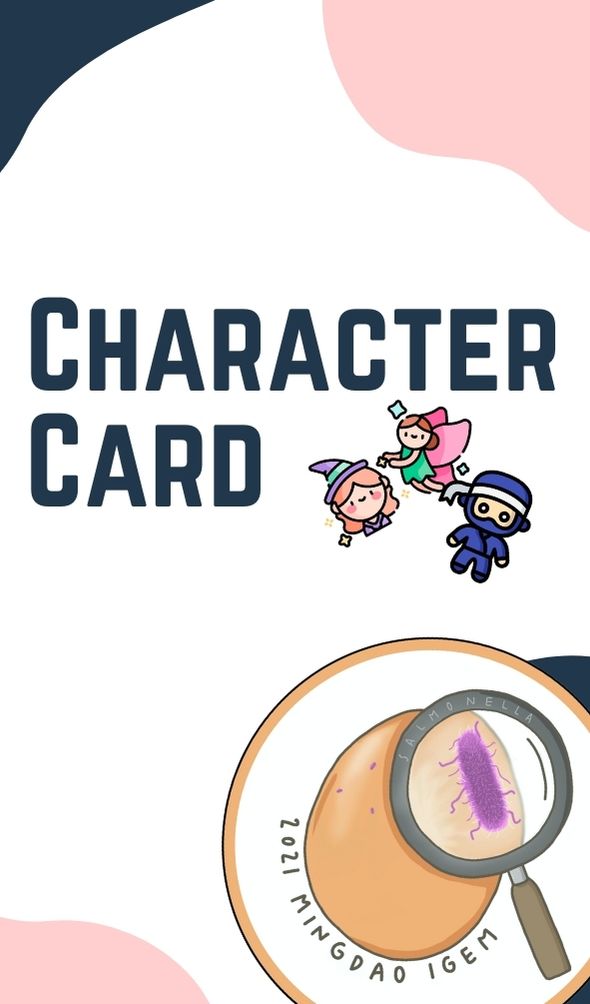 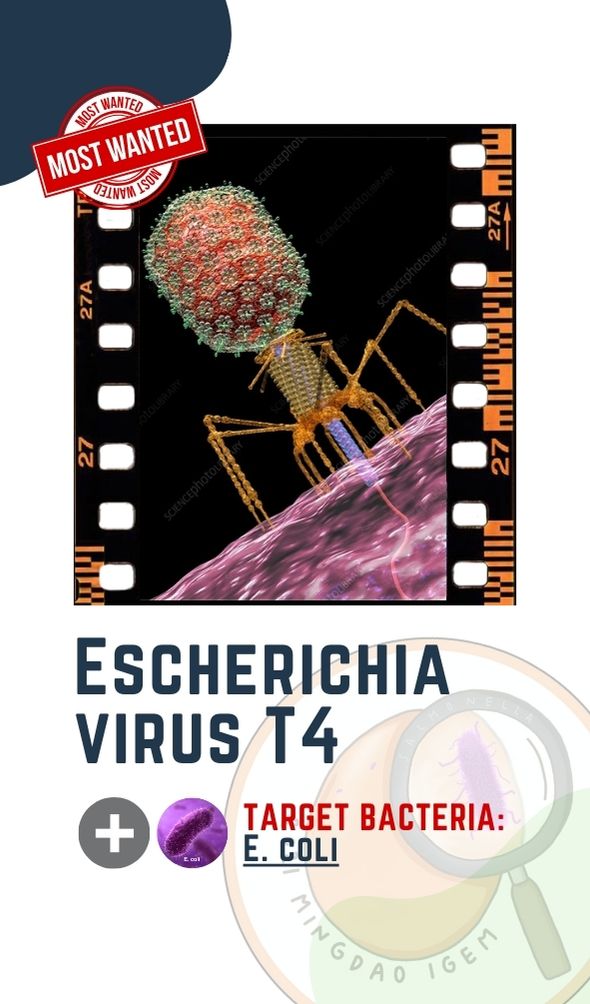 4. Wheel: The wheel determines how far you can go. The minimum step you can go is 1; the maximum is 3

1. 2-4 players draw from the character cards to determine which bacteriophage each player is representing.

3. The first player spins the wheel to determine how many steps to take. Move forward according to the number rolled. Do what the block you’re on insists you. Either you retreat some steps due to acidic level and temperature change or you draw from the Chance or Event deck and react accordingly.

4. The second player follows, and so on and so forth until a player reaches the end of the map.

We were granted the opportunity to exhibit our board game with the general public at the National Museum of Natural Science in Taiwan. It was during the Biotechnology Festival hosted by the museum; we were given a stall where not only could we explain to the general public our project and what iGEM is, we could have people sit down and have a quick experiment and a quick game! We got people from different ages, all the way from elementary school children to 64 years-old grandma.

The procedure went like this: when a person arrives near our stall, we have people inviting them to a 10 minutes session on iGEM. If they are willing to come, we first introduce them to what synthetic biology is and what we are planning to do this year for our project. We then have five minutes for a quick experimentation to evoke their interest in synthetic biology (more on this in Education). For the remaining three minutes, we invite them to a quick round of Snaky Salmonella. Through that game, we successfully communicated our project’s main idea, the importance and the impact of bacteriophage, and our enthusiasm for synthetic biology. (more on this in Education) 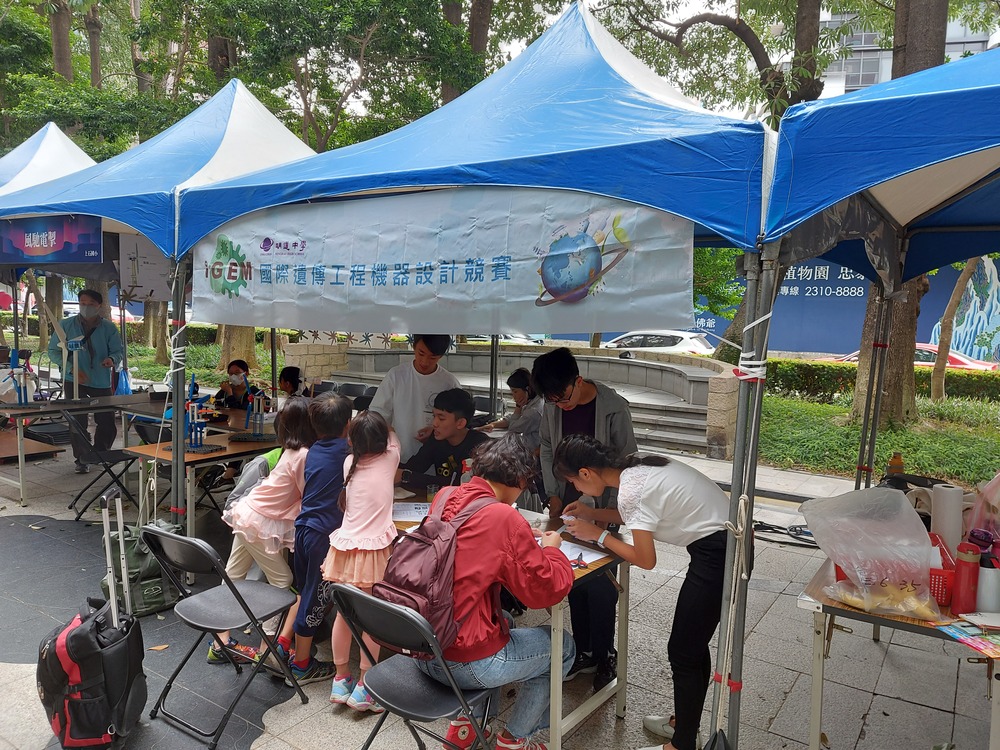 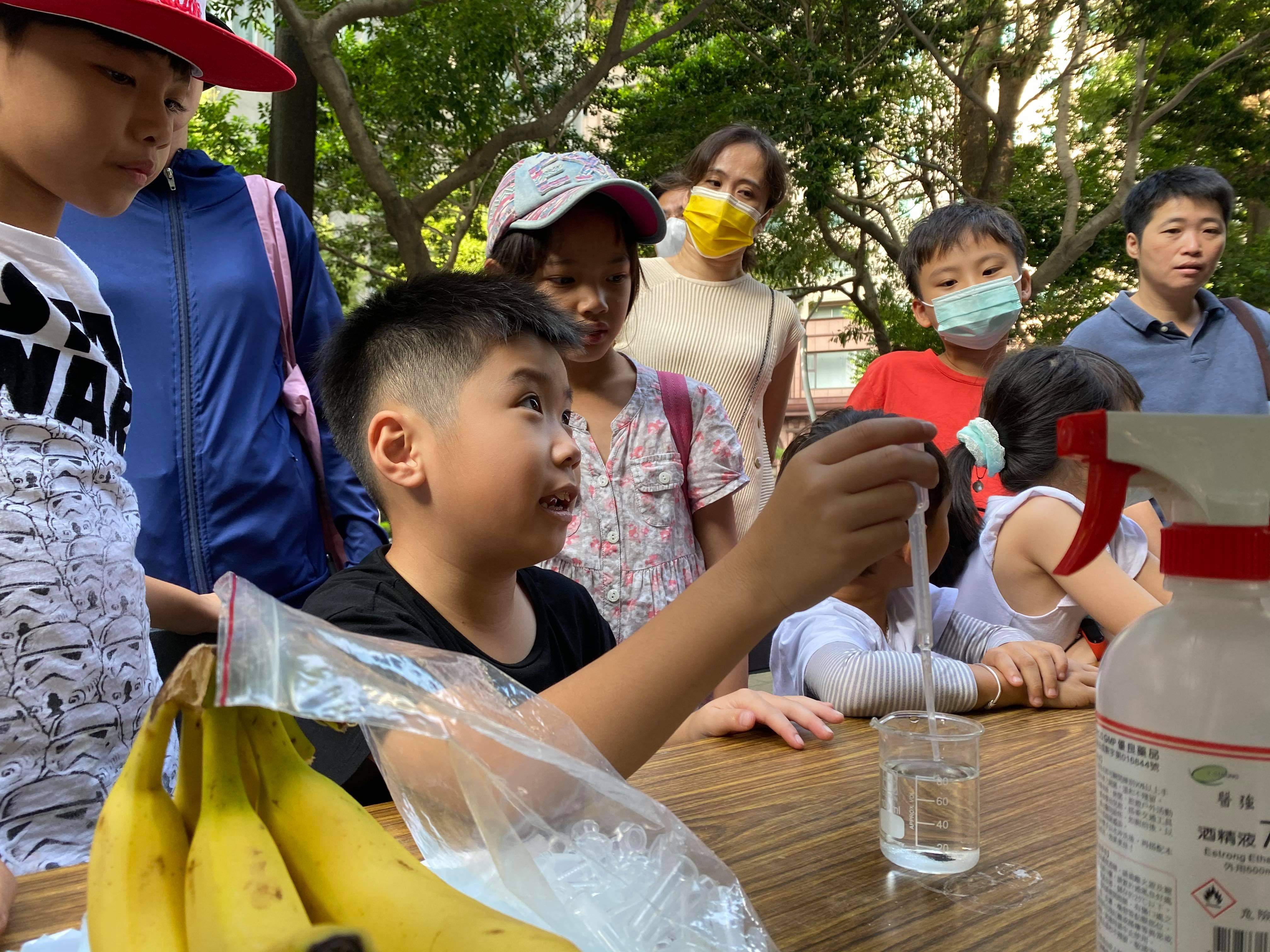 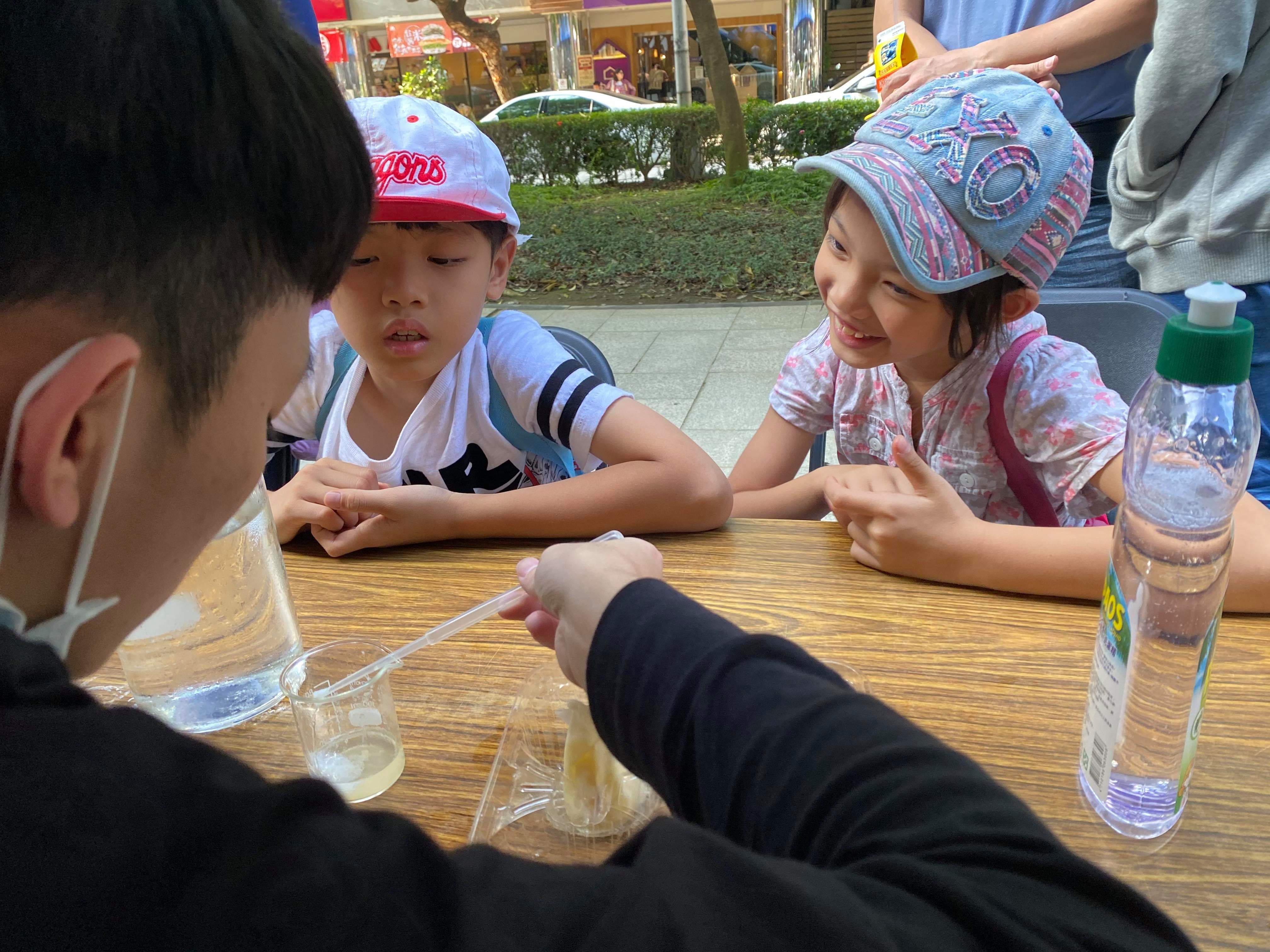 We brought this game to elementary students during their visit to our lab. Since synthetic biology is beyond their curriculum, we reached out to a local elementary school nearby, offering an opportunity to teach them about synthetic biology and iGEM. The school, Jiu-De Elementary School was kind enough to accept the offer and brought their kids to our school for a lab visit and a quick lesson (details and more in Education). In the end, we also invited them to play a couple rounds of the board game. Out of our expectation, many of them actually enjoyed the game! Who would have thought that a modified version of a classic game would actually attract kids. We saw them discussing which bacteriophage is better based on their different abilities and types of bacteria and disease they can combat, they were intrigued! We believe we’ve successfully planted a little seed of synthetic biology in their heart. Hopefully, one day, the seed will ferment and one of them can devote themselves to this field! (details and more in Education) 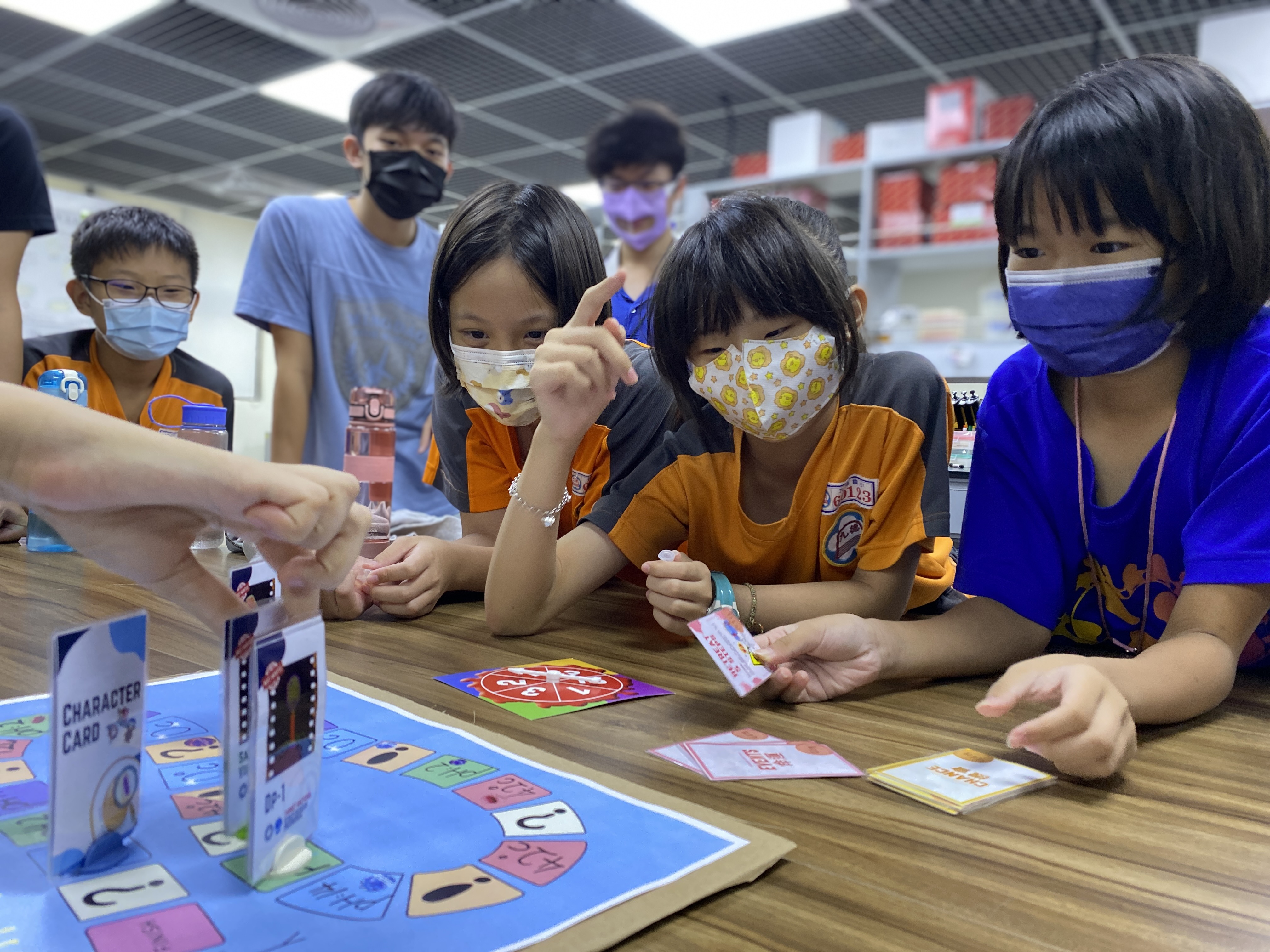 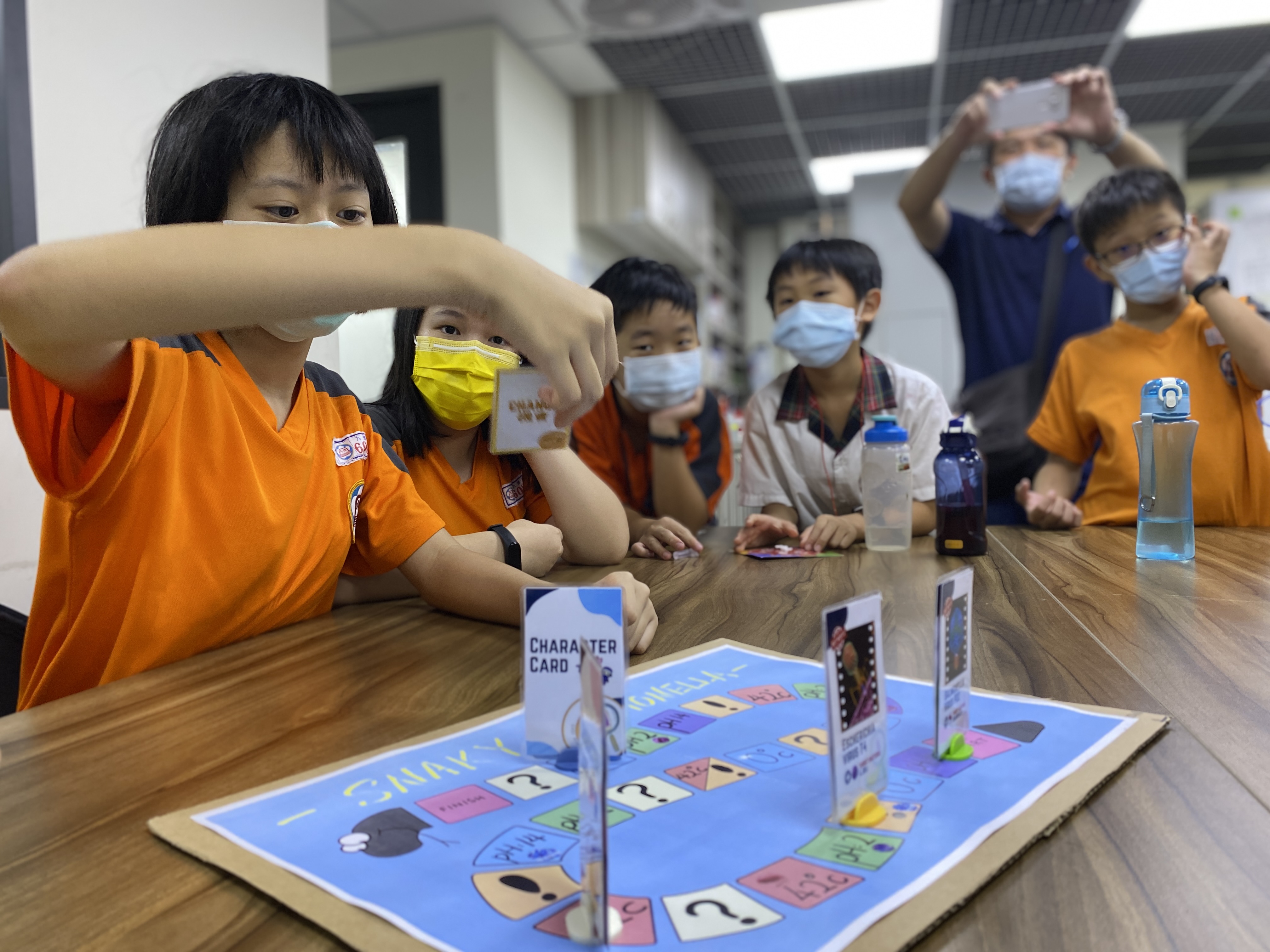 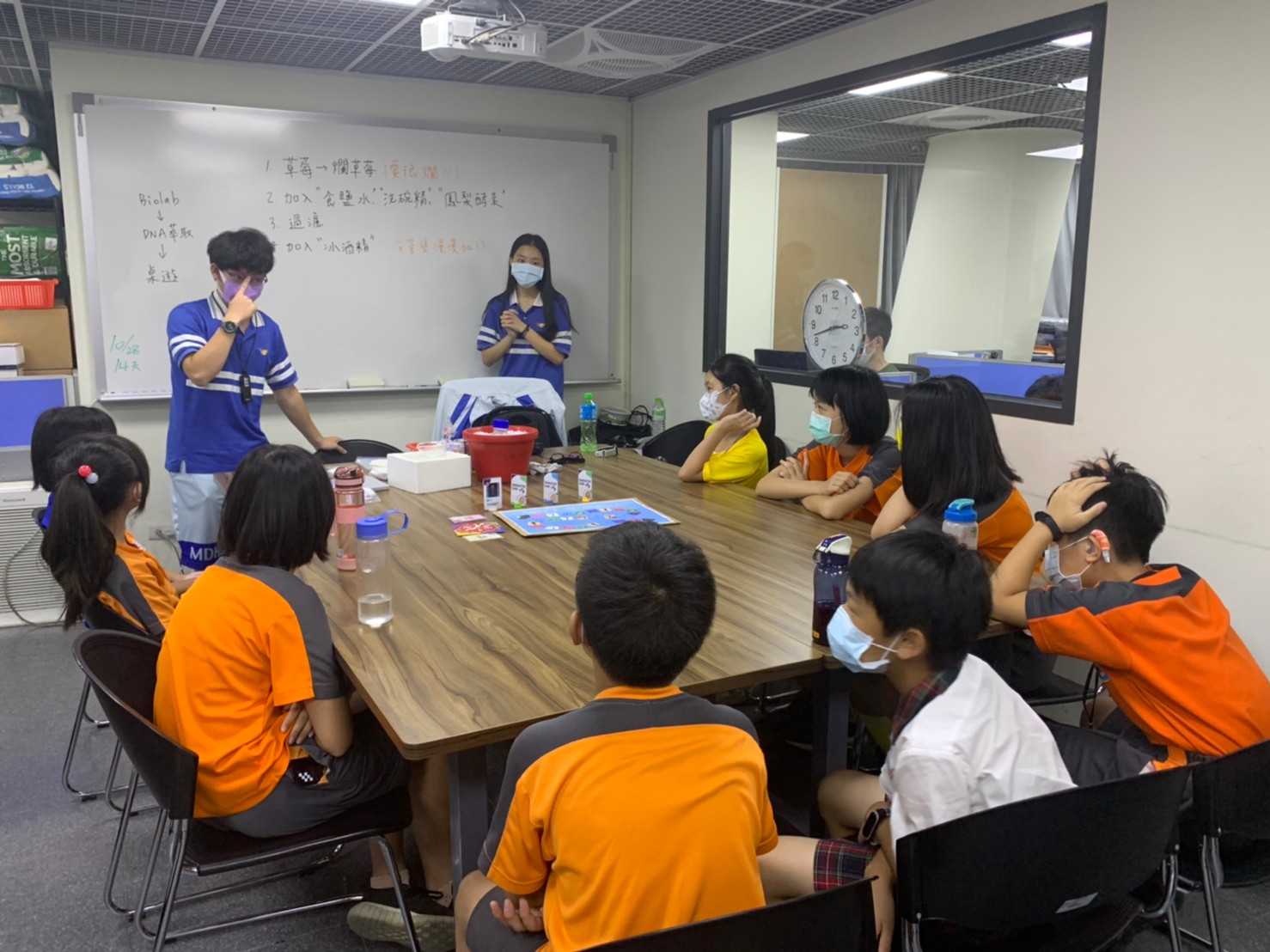 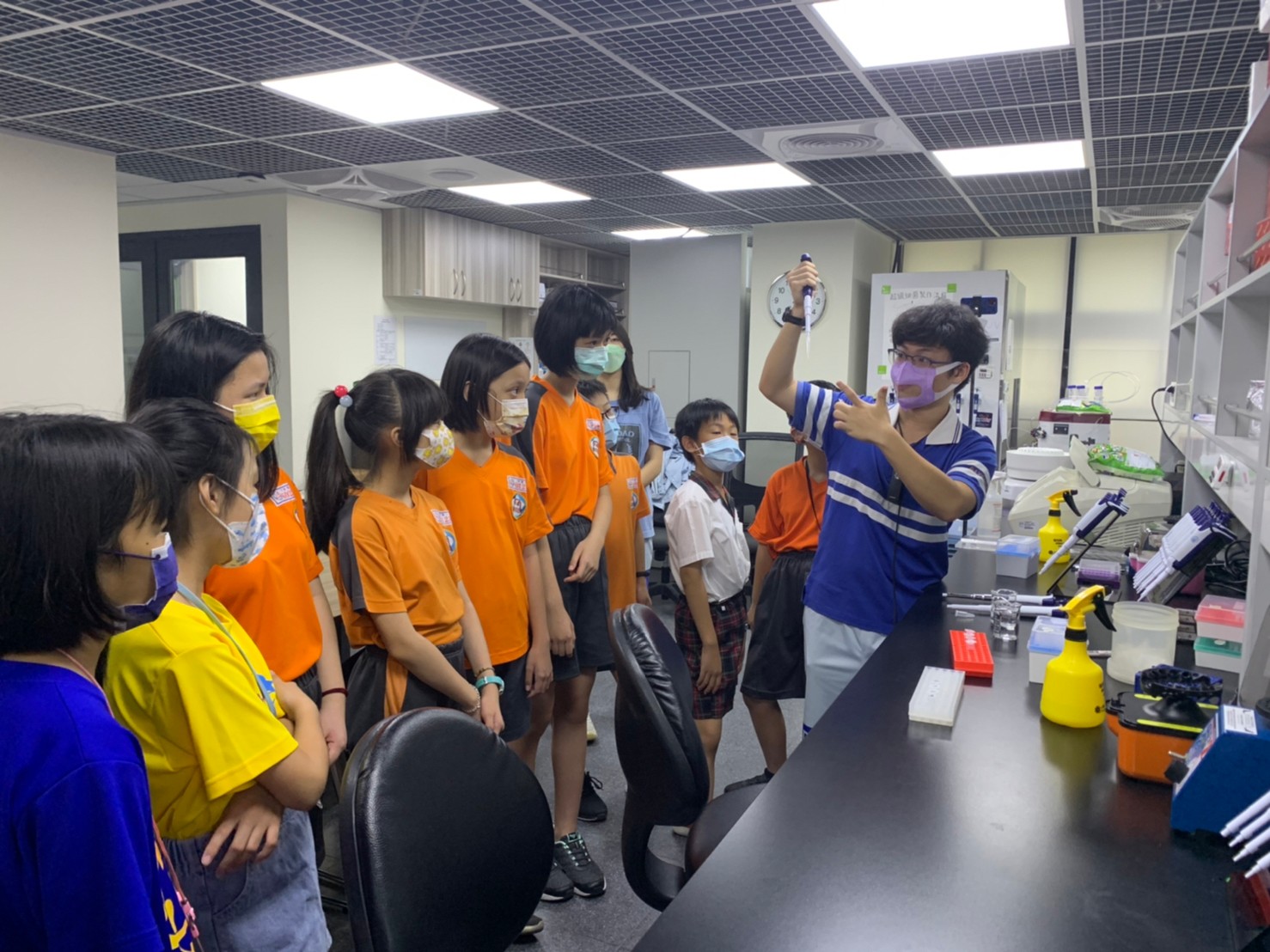 We hosted the STEAM Fair for our school and held a stand at the fair, introducing high school students to iGEM (details and more in Education). Similar to the Biotechnology Festival in the National Museum of Natural Science, we invited people to sit down and play our board game and communicate with them. Specifically for junior high students, we invited every class in our junior high department to our lab and did a quick experiment while we introduced them to iGEM. Of course, the board game was played after each session. What’s special about these two events was that after holding this fair, we actually had new members joining the team! Two students reached out to us after the event, showing their willingness to participate in iGEM and they are now in our team as well. Slowly but surely, we are spreading what we love to everyone around us. (details and more in Education) 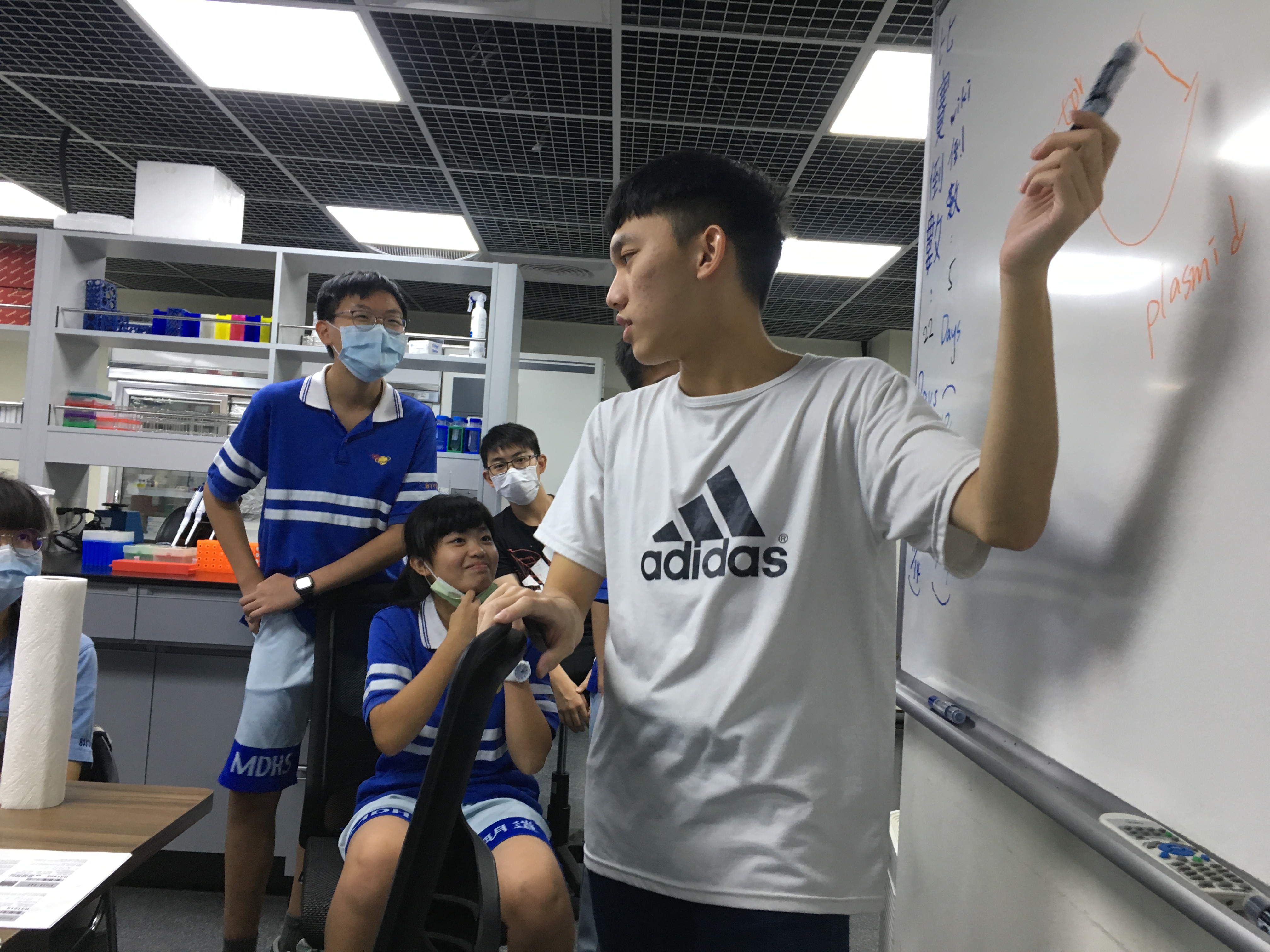 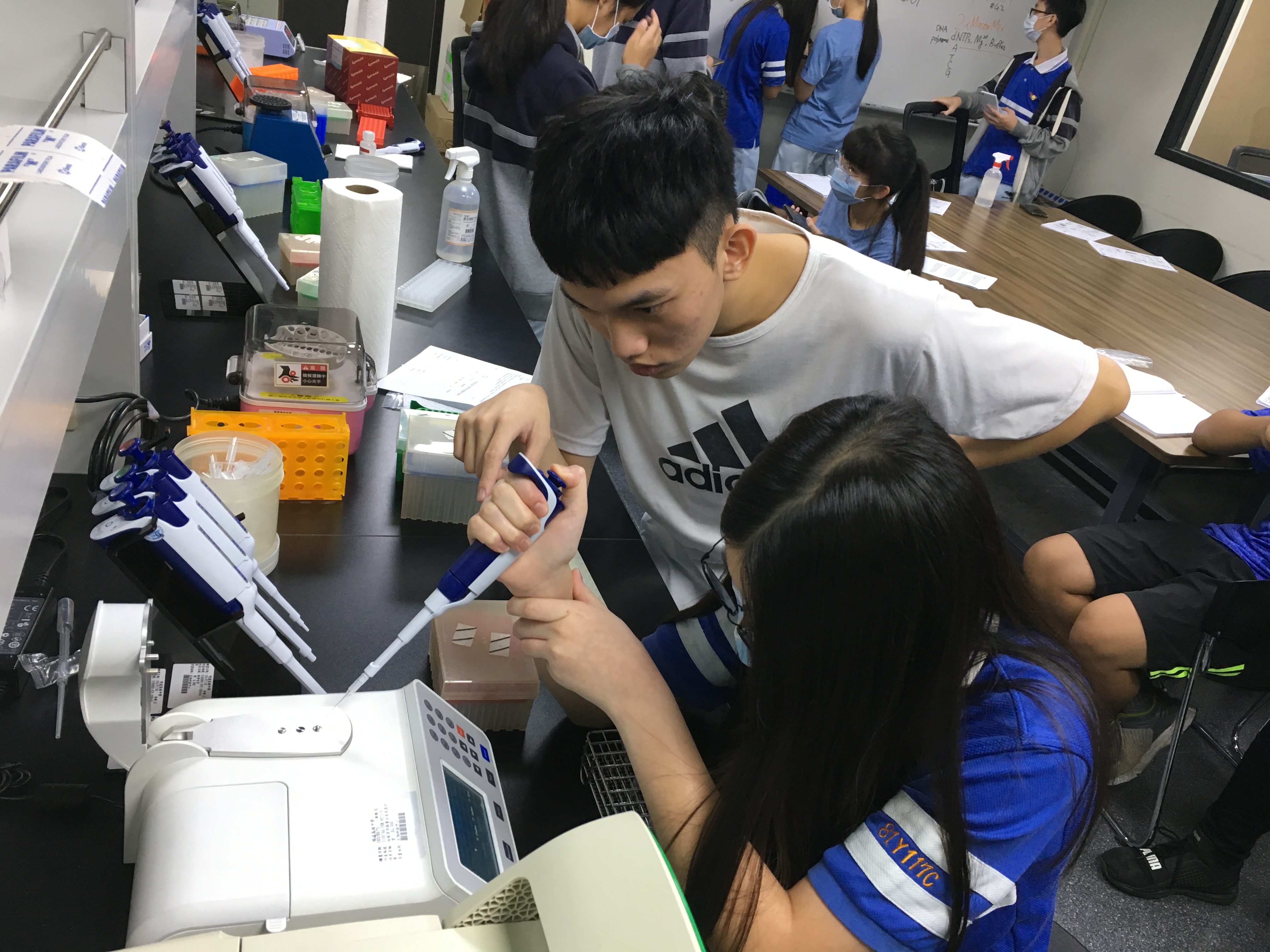 Communication in iGEM is crucial, it is what passes this tradition, this spirit, and our enthusiasm to the following generations. We tried our best to come up with a material to help us communicate our experimental idea, purpose, impacts, and enthusiasm, hoping that we can inspire someone. Through countless events held with the general public, elementary school students, and high school students, it could be said that the process has so far been successful. From the responses we got, with students wanting to join us, with little children enjoying the process of the experiment and the board game, and with inspired adults asking us questions regarding the competition, we surely spread a lot of “synthetic biology seeds” in our society. Maybe it might not be enough, but at least we’ve tried and we do not regret the effort we’ve put in!