Hardware
- Click to visit -
Overview
We developed a method to detect the infection of flower viruses and viroids by isothermal amplification that can be carried out on the spot by farmers. In addition, we created the hardware named “DLAMI” that makes it easy to measure the fluorescence of samples. We produced DLAMI by using a 3D printer and received feedback from farmers who would use it to improve it. Eventually, we confirmed that DLAMI is sufficiently user-friendly.
Problem
We proposed and examined a method using CRISPR-Cas12a assisted RT-LAMP for detecting infection of flower viruses and viroids, which have become a serious problem in the flower industry. (see the Description page for details)
We used a method to detect by amplifying nucleic acids of virus and viroid enzymatically and expressing fluorescence reporters. Early detection and isolation of infected individuals on the farm would be effective in minimizing damage. We tried to build a system that would allow farmers to detect the virus on the spot so that our detection method could be used more effectively. For this purpose, we selected the RT-LAMP method rather than the qRT-PCR method because this system requires skilled manipulation and expensive specialized equipment (ex. a thermal cycler). On the other hand, the RT-LAMP method does not require large-scale equipment and expertise, so it is easy to use for farmers.
By doing experiments, our wet team demonstrated that the CRISPR-Cas12a assisted RT-LAMP functions as expected. (see the Results page for details) However, there is a problem for farmers to detect the virus on the spot using this method. That is, how to observe the output fluorescence. To address this issue, we decided to develop a device that can be easily and quickly used by anyone working in a farmhouse. This device is a part of DLA (Disease Leave Assessment) cycle. (see the Implementation page for details)
Design
We designed the hardware named “DLAMI”(DLA’s Machine-Interface) shown in Figure 1 to observe the output fluorescence. DLAMI is a black box with a lid and a stand for the PCR tube. There are two holes in the side of the box. The bigger hole is used to irradiate 470nm blue light to excite samples. We used 470nm blue LED light as excitation light. This will irradiate light that includes light in the wavelength near 495 nm, which is the maximum absorption wavelength of fluorescent dye “FAM”, and does not contain high wavelength light which does not influence excitation[1]. The smaller hole is a camera hole in which we shoot the sample which is irradiated by blue light. In the front of the camera hole, there is a 525 nm long-pass filter to penetrate fluorescence by cutting off irradiation light. 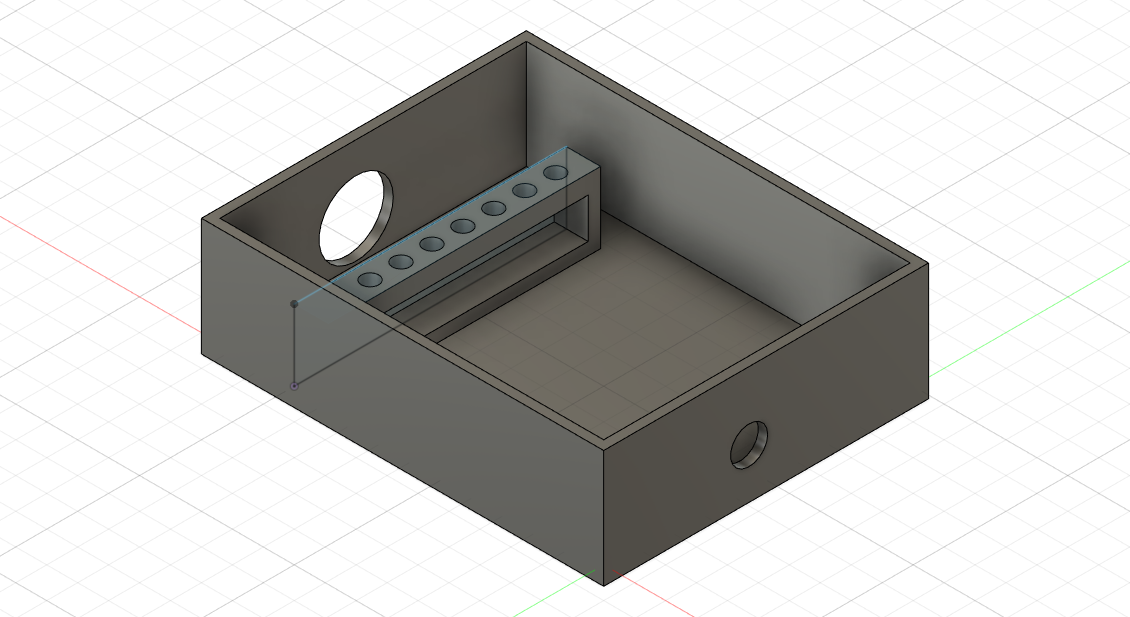 Fig.1 Design of DLAMI
Please click here to download stl file ( as zip file ).
Demonstration
We produced DLAMI with a 3D printer. Ultimately, DLAMI was produced as Figure 3. This picture is shot before inserting a filter and the LED.
Fig.2 Parts of DLAMI created by 3D printer 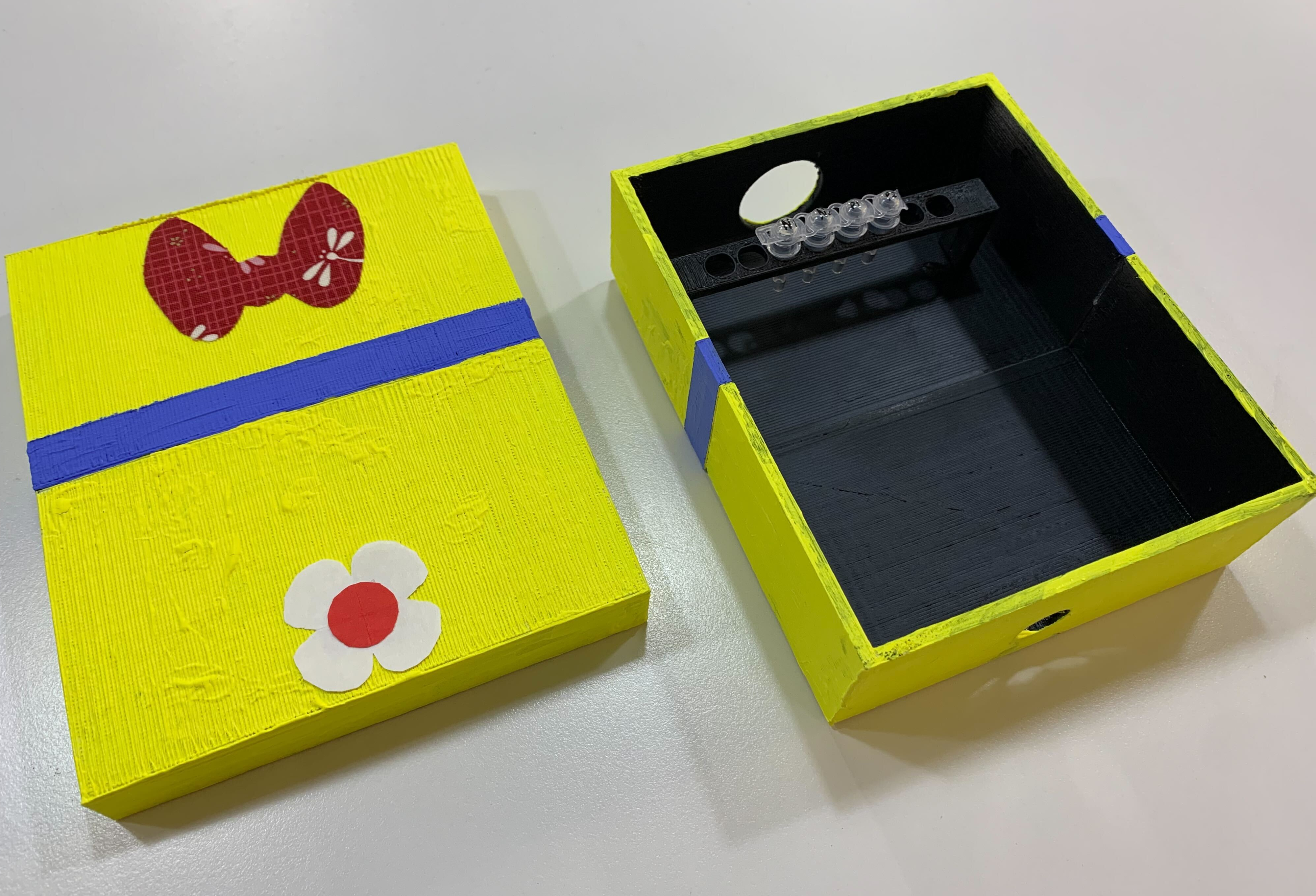 Fig.3 DLAMI
By putting the sample in the tube stand and closing the lid, taking photos from the camera hole while lighting , we can take a photo of the excitation light of the sample. This picture of a PCR tube in which contains GFP is as Figure 4. The sample was irradiated by blue light and the filter cut off irradiation light. This picture suggested that we can shoot the sample irradiated in the darkroom by using DLAMI. We actually took the picture of PCR tubes which contain the virus DNA template. We can distinguish positive from negative from this picture. Thus, we have been able to create a device that can easily capture the fluorescence of a sample, which can be used by farmers. 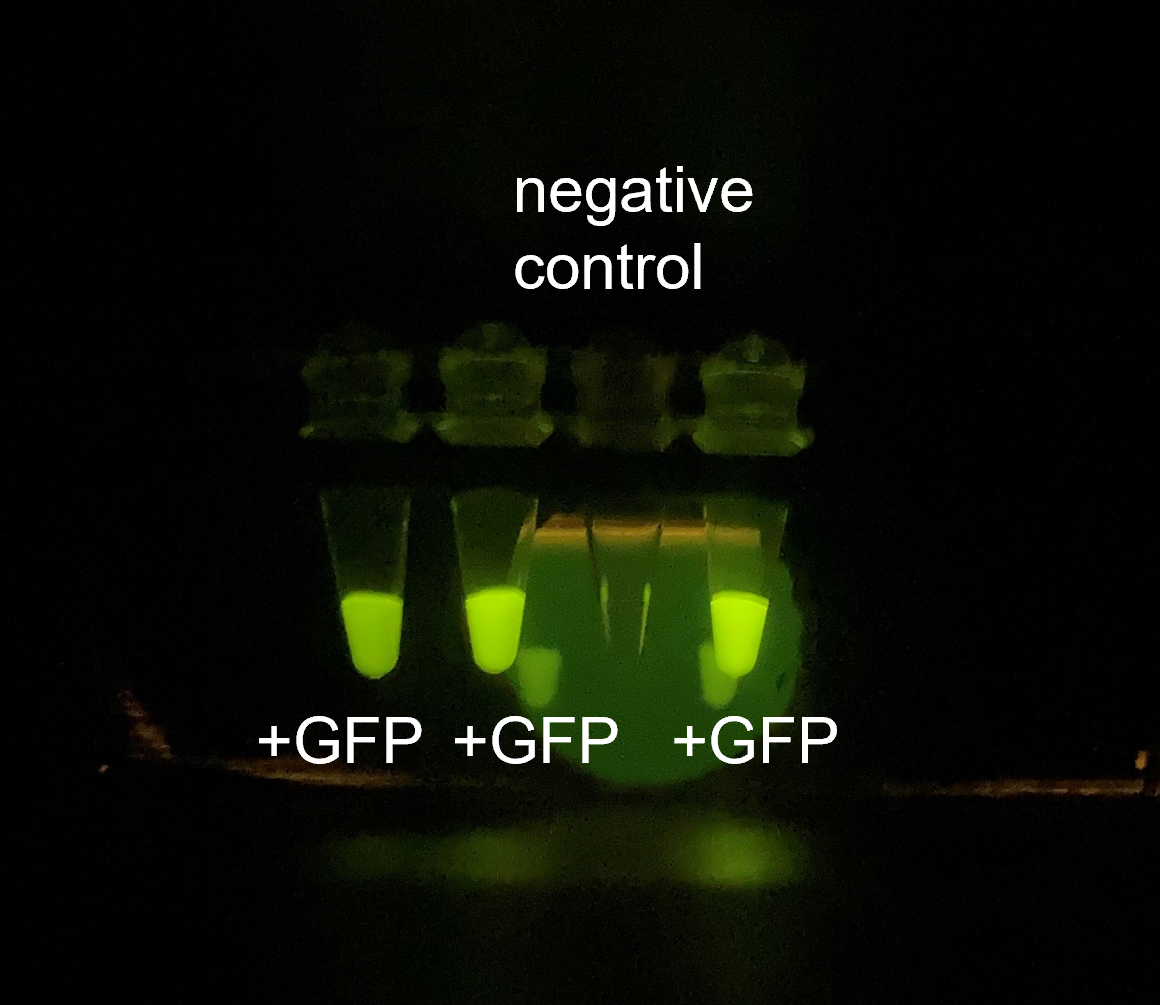 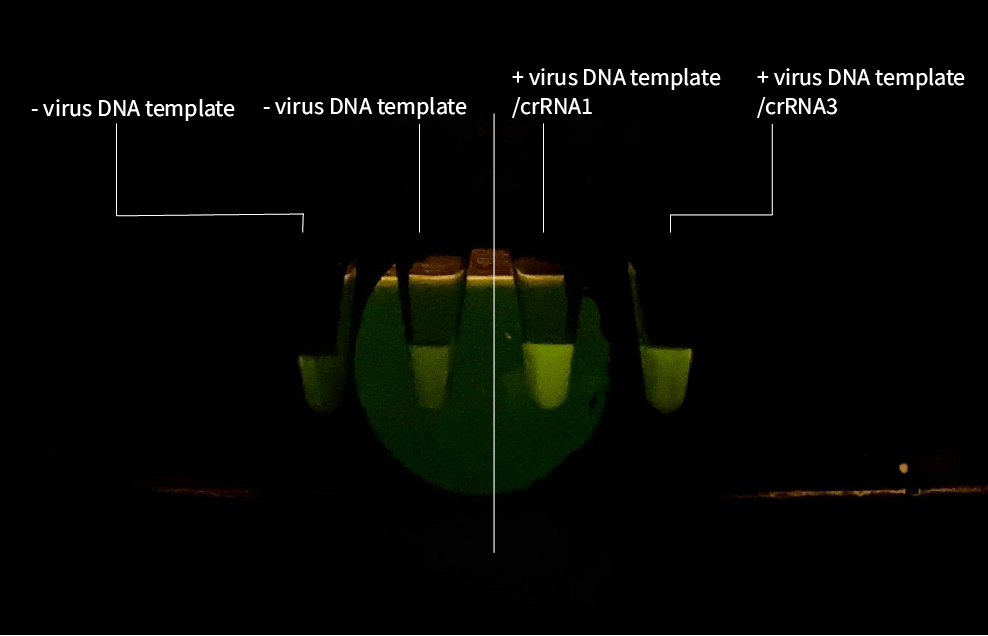 Fig.5 A photo showing Fluorescence The detection of plant viruses was demonstrated to be practicable. Enzyme reaction was tested with two different guide RNAs. +virus DNA shows more fluorescence compare to negative control.
Feedback
We interviewed to confirm whether DLAMI established is actually useful for farmers.
First, we showed the blueprint of DLAMI to Mr. Kurokawa, who is a flower farmer in Kyoto, and asked his opinion on DLAMI and the detection system. He said that there is a great demand for the viral detection by farmers who manage their farms on a large scale. So far, there is no diagnostic system that farmers can use easily. Thus, using a detection system has commercially great merit and economical value. In addition, when we asked about the labor of the detection system, including using DLAMI, he said that the merit of the detection system outweighs the labor. Therefore, we found that the purpose of this device, which is to allow farmers to perform virus and viroid detection easily, was well achieved.
Future application
The RT-LAMP method, like the real-time qPCR method, is commonly used to detect nucleic acids, including detection of COVID-19. As discussed on the software page, false positives and false negatives are a constant concern with the nature of infection testing. To improve accuracy, we need to increase the prior probability of testing (the probability that a positive specimen is included), and by training our software and combining it with imaging as a preliminary step, we might improve the accuracy of testing for plant viruses in the field.
DLAMI is designed to take pictures of fluorescence with a smartphone camera and detect viruses. Therefore, by taking photos of the specimen leaves with the same smartphone and storing them with the detection results, it is possible to store the "leaf photos" and "infection test results" in a single smartphone. By accumulating information with these correspondences while testing many specimens, and using it as teacher data for machine learning, more accurate image diagnosis may become possible. In this way, our attempt to connect software diagnostic imaging, RT-LAMP method, and hardware for detection through the medium of smartphones is creating an effective and portable diagnostic device that has never existed before.
In addition, we developed DLAMI to detect viruses in farmers, but its application is not limited to flowers. By changing the LED and a filter to match the fluorophores used, this device can be used for a variety of other fluorescence measurements. Therefore, DLAMI will contribute to various iGEM projects that require fluorescence measurements by providing a user-friendly fluorescence measurement method.
Reference
1. OPTO SCIENCE Filter finder https://www.optoscience.com/maker/omega/finder/