Education and Communication
- Click to visit -
Education for High School
Overview
In order to promote synthetic biology, we aimed to create educational materials that are easy to understand even for those unfamiliar with biology. We also conducted educational activities for high school students to verify the effectiveness and improve the materials. This activity formed part of an educational program of the Hyogo Prefectural Board of Education. According to the results of the pre- and post-event questionnaires, the participants’ attitude toward synthetic biology and genetic modification changed positively. This is the achievement of the educational activities by iGEM Kyoto.
About materials
We have created slides about synthetic biology, genetic modification, and iGEM so that people around the world can view them via the Internet (wiki), which allows us to reach out and make synthetic biology more accesible to a wider audience. In addition, since the term "synthetic biology" is not popular in Japan, we aimed to create slides that are easy to understand for people who are not very familiar with biology.
Our slides are composed of three major parts. The first one is about iGEM (Kyoto), the second one is about synthetic biology, and the last one is about our project. Here is the reason why we put them in this order. First, by explaining we can let people know about who we are and get them interested in the following slides. Next, we show what synthetic biology is and how it is done in practice to allow the readers to systematically learn about synthetic biology. Finally, we explain what we are doing in our project, so that the reader can get a better understanding of synthetic biology with the knowledge gained from the previous slides, and how what he or she has learned is being used in the project. The following are the slides we used.
These slides were made as concise as possible using hints and illustrations. During the workshop, we also asked questions to each student and gave hints according to their level of understanding while explaining. We hope you'll try to answer the questions too!
About the activity
In order to verify and improve the effectiveness of the materials we created, we conducted educational activities for high school students as part of the Hyogo "Science & Technology" (Sci-Tech; it means “blooming” in Japanese) project. The Hyogo "Sci-Tech" project is a project of the Hyogo Prefectural Board of Education aimed at fostering human resources in the field of science and technology through cooperation among high schools, universities, companies, and research institutions. The project started when Hyogo Prefecture was selected by the Ministry of Education, Culture, Sports, Science and Technology as a core SSH (Super Science Highschool)(regional hub) in the SSH program[1].
The specific activities we carried out were a lecture on synthetic biology followed by an interactive workshop. Before and after the activity, we conducted a questionnaire survey on synthetic biology and genetic modification to find out the changes in the students' awareness.

A photo of the participants during the activity
In order to prevent the spread of Covid-19, all of these activities were conducted online. The above photo is a group photo of the participants during the activity. Although it was difficult to reach a wide audience online, we still made some preparations to make this activity accessible to more people.
The first thing we did was to create a poster that would catch the eyes of many people. We added wording that would attract people who were not interested in biology and invited a wide range of participants. As a result, we found, through the pre-event questionnaire, that even students who are interested in fields that are relatively unrelated to synthetic biology such as psychology and animal behavior joined the event. Secondly, our educational activities were as part of the Hyogo Prefectural Board of Education's "Sci-Tech" project. If we had conducted this education activity for only one high school, only the students of that high school would have had access to the activity, but by conducting it as part of this project, students from multiple high schools were able to participate, leading to access by a larger number of people.
The lecture was divided into three parts: Part Ⅰ, Part Ⅱ, and Project explanation. The specifics of each part are described below.
In the workshop, we divided the students into two groups, and we presented them with biology-related questions, which we discussed with them to come up with answers. When selecting questions, we were careful to make sure that the questions were related to the actual tools used in iGEM, such as plasmids and restriction enzymes, and that the questions emphasized thinking skills so that the discussion would be meaningful.
In order to encourage an open dialogue with the students, we conducted a questionnaire before the activity. The questionnaire was designed to help the iGEM Kyoto team to understand the needs and interests of the students and to facilitate the dialogue. Specifically, since we found out from the questionnaire that many of the students were interested in medicine, we added lectures that bridged the gap between synthetic biology and medicine, such as gene therapy and nucleic acid medicine, and set up a time for us to answer the questions raised in the questionnaire and resolve the students' doubts.
During the workshop, we asked each student to speak up about the answer to the question, and gave hints to students who were still in the process of answering to encourage them to think, so that they could actively participate in the workshop even if they did not have a complete understanding. It is assumed that by making it easier for them to speak up, the dialogue became more open.
We evaluated the results of this activity through a questionnaire from the students. Before the lecture, we asked the following question,

"What do you imagine when you hear the word 'Gene Editing'? Which impression is stronger, good or bad?"
50% of the students answered that they had a bad or rather bad impression of the word.
However, in the questionnaire after the lecture, the students were asked, "Has your impression of genetic modification changed as a result of today's lecture? Specifically, how did it change?" Then the answers were as follows.

We discovered that the negative image that the students had has improved in a positive direction. This can be said to be the fruit of education's materials and educational activities.

The result of the pre-event questionare
The result of the post-event questionare
Education for IBO delegate candidates and JBO participants
Overview
In order to spread synthetic biology, we aimed to create educational materials that would allow people with relatively extensive knowledge of biology to experience synthetic biology in a short period of time, even if it is online. The presentation was made at an educational activity held jointly with iGEM UTokyo for International Biology Olympiad (IBO) Japan candidates and the Japan Biology Olympiad (JBO) participants.
About materials
In Japan, even if biology is taught in high school, few students themselves know about synthetic biology and the activities of iGEM. For this reason, we aimed to create slides for people with relatively extensive knowledge of biology with the aim of conveying the fun of synthetic biology and iGEM.
Our presentation is divided into three main parts. The first one is about Parts and BioBricks, the second one is about Snapgene and BLAST, and the last one is about the brief history of the project. In order to show how iGEM works and how interesting it is, we particularly focused on the second part of the presentation, Snapgene and BLAST, where we demonstrated how to use these tools. For this reason, we prepared a simple theme so that the audience could learn how to handle Snapgene and BLAST by following the examples.
The reasons for arranging slides in this order are as follows. First, we explained the basics of synthetic biology design, Parts and BioBrick, to give a brief understanding of synthetic biology and to provide the prerequisite knowledge for the subsequent slides. Next, we demonstrated Snapgene and BLAST, tools commonly used in synthetic biology and iGEM, to make synthetic biology familiar and attract people's interest with its novelty. Finally, by showing the simple origins of the iGEM project, we tried to structure the lecture in such a way that it would make the audience realize the connection between biology and social issues.
The following are the slides we used.

About the activity
We collaborated with iGEM UTokyo to educate the International Biology Olympiad (IBO) candidates and the Japan Biology Olympiad (JBO) participants on how effective the materials we created are in practice. The specific activities we conducted jointly with iGEM UTokyo were lectures on synthetic biology, explanations of each team's projects, and introduction of iGEM activities. To prevent the spread of Covid-19, all of these activities were conducted online. 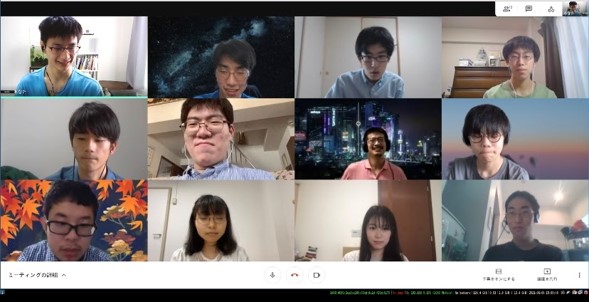 A photo of the participants during the activity
Reference
1. Hyogo Prefectural Broad of Education, 兵庫「咲いテク」事業, https://www.hyogo-c.ed.jp/~koko-bo/05risuu/r2ssh-ssh/r2ssh-scietech/r2ssh2.html
Next:
Sustainable Development Impact →