Contribution
Our Contribution
This year, our team could make an innovative contribution to future iGEM, mainly through adding new parts to the iGEM registry.

BBa_K3815000
BBa_K3815002
BBa_K3815007
BBa_K3815000 and BBa_K3815002 are the sequences for the new purification method, called ELK16 system. This system had not been adopted by other past iGEM teams. As you can see the detail of the parts from URL, they are composed of ELK16 that has the ability to self-assemble, Mxe GyrA intein that is capable of self-disconnecting by DTT, PT linker, and the targeted protein. In this system, when the fused protein is produced, ELK16 self-aggregates and precipitates. After that, taking this aggregate and adding DTT in order to cut the N terminus of the intein, we can get the targeted protein. Compared to the other methods, the expensive column is not needed to collect peptides, and the additional process to separate the tag from the protein of interest could be omitted. 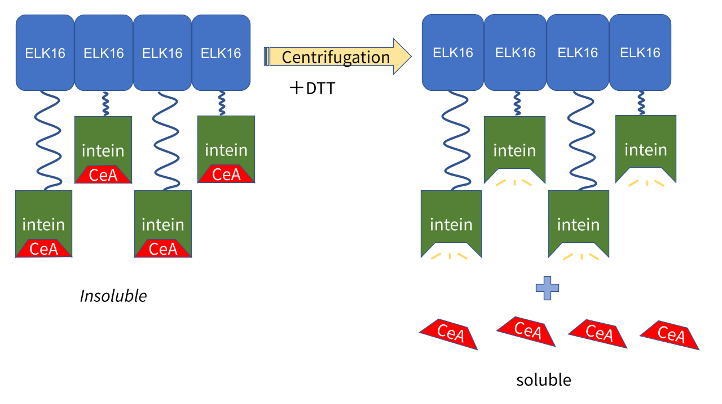 Fig.1 The mechanism of ELK16 system

Fig.2 BBa_K3815002
This part is to produce an antimicrobial peptide called Defensin1, which has been confirmed to be synthesized by ELK16 system.

In addition to the parts above, we also made part composed of His tag, Mxe GyrA intein, PT linker, and the targeted protein. In the ELK16 system, the fused protein needs to be precipitated in order to recover the targeted protein[1][2][3]. Some proteins could not solubilize again once they have formed the aggregates. In this case, this part might be useful because this has His tag instead of ELK16.This purification system with His tag and intein has contributed greatly to the development of recombinant protein production and purification because it might save time removing tag. The intein that we used this time is cut only when adding DTT. Therefore, it should be useful to improve the protein purification for future iGEM teams. In addition to this, the intein is also used for tag-free purification currently being actively researched, so this part would be applied in a variety of ways.

Fig.3 BBa_K3815007
This part is to produce an antimicrobial peptide called Defensin1, which has been confirmed to be synthesized by this tag intein method.
References
Next:
Team →