Background: An essential question that we asked ourselves over and over again was: why is OSCC ignored during the earlier stages? To get an answer to this question and also the social and economic factors that grip OSCC patients across India, we decided to talk to Dr. Hriday Dewan Kant, from Azim Premji University and Dr. Sadhna Saxena, from the Department of Education, Delhi University (2002-2019).

Feedback: Our conclusions were two-fold. First, we realized that people from low-income backgrounds in developing countries like India do not have proper cancer awareness or a cancer care system[33]. Second, we believe that even though a patient may realize there is an issue, they choose not to go to a doctor in fear of subsequent expenditures that they cannot afford.

Implementation: Hence, we resolved to keep a low-cost and portable kit as our top priority. The hardware of our kit was specifically designed, keeping in mind the affordability and reusability of our diagnostic kit. We had numerous choices for the detection sensor, including PhotoMultiplier Tube (PMT), Photodiodes, CCD camera, smartphone camera, etc. We rejected PMT since it costs in lakhs for an individual kit. Similarly, photodiodes would require an extra electronic circuit. That's why we finalized a smartphone CMOS sensor for signal detection and a smartphone app for data processing, thereby reducing the amount of electronics to use considerably (hence, making the kit more cheaper, portable, and easy to use).

Background: Another question raised in the discussions was about the efficiency of the kit. How will we ensure that false positives and false negatives approach zero as the project dabbles in medical sciences and gravely concerns those who get tested.

Feedback: It was evident that by choosing three dysregulated biomarkers, we were reducing the chance of any discrepancies. However, we had to consider the possibility that certain biomarkers were not encountered in the study conducted in the PGIMER patient population.

Implementation: We plan to use Machine Learning to determine the functional form of the function which will output the testee's susceptibility score for OSCC and the probability distribution across the set of available categories the individual is likely to belong to, for example, average, high susceptibility to OSCC but not manifested yet, OSCC already exists but is in early stage, OSCC already exists but is in late-stage, inconclusive, etc. Displaying the probability of each category may also reduce the chances of misinterpretation. In addition, if the probability values are given alongside in an understandable and straightforward presentation, it will compel the professional to carefully consider the results and explain the future course of action to the patient.

Background: While we interacted with our peers, we felt the need to communicate our ideas better and more accurately. We contacted Dr. Ipsa Jain, who is a science illustrator and communicator affiliated with the Institute of Stem Cell Biology and Regenerative Medicine (inStem), Bangalore.

Feedback: She steered our team towards the use of visual representations, flow-charts and sci-art while explaining our project. She also suggested major changes in our presentation style that would help the general public grasp the workings of our kit. For the duration of the project we had to communicate our idea to various groups of stakeholders, each of whom had a different scientific background. Discussions with Dr. Ipsa also helped us identify our target audience and make suitable changes to our presentation taking into account the exposure to science our audience had.

Implementation: We also discussed basic design principles and visual hierarchy, which we then employed in our presentation. 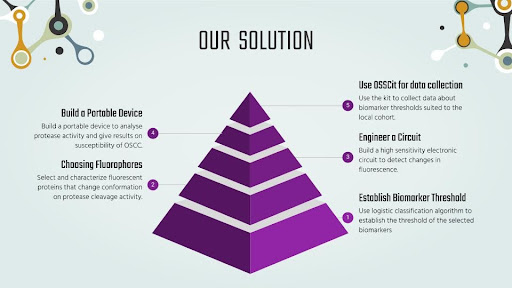 This is a slide from our presentation that employs visual hierarchy in a sense that the reader's eyes are guided from the base of the pyramid to its peak, taking them through the important milestones in our project with a short but crisp outline of each step. The pyramid is also a representation of how each step is built on the foundation of the previous one.