Awareness Survey and its Analysis

We wanted to gauge the awareness level of the general public regarding oral cancer, dental hygiene and cancers in general. For this, we decided to collaborate with IISER Bhopal, who were also working on cancer-related diagnostics. Both the teams met up virtually and decided to work on general and cancer-specific questions for the common people. Once the questions were ready, they were reviewed for readability and validity by the humanities faculty. Our survey was translated into Punjabi and Bengali as well to reach a wider set of audience whose mother tongue is not English. We did not receive any responses in the vernacular languages and think that might be because typing in these languages is not straightforward. 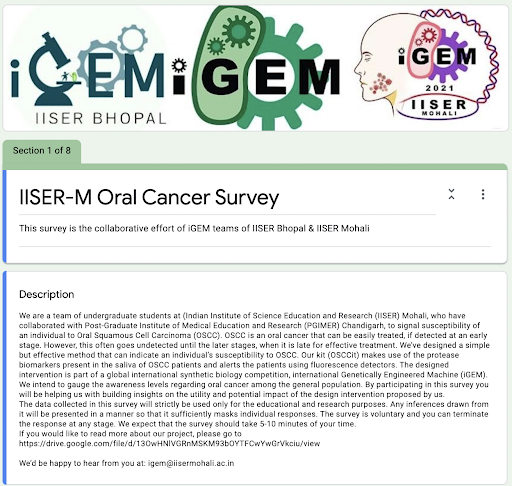 We circulated our survey for the public and received 86 responses. Our survey efforts mainly showcase the inferences collected from the younger literate generation with equal voices from both the genders spread throughout the country. Hence, any inferences made from this survey pertain only to the section of society with the above mentioned characteristics. According to our poll, this group of people in majority are moderately (46.5%) or highly (27.9%) concerned about the development of better cancer diagnostic and treatment methods.

We also collected total household income to find the different financial groups of people our survey was able to reach. Almost all financial categories of people were included in the survey with around equal proportions (with slight acceptable differences).

Google/ internet, school/ university, social media and acquaintances who have/had cancer turned out to be their major sources of awareness about cancers. But almost half (54.8%) of the surveyees had never even heard of OSCC, even though this disease is rampant in India.

Even though most of our participants came from literate backgrounds, they did not know what symptoms could point to oral cancer.

It was also observed that a significant proportion (14%) of participants utilize the internet to address their medical issues. This may be because people consider regular checkups profligate and prefer being their own doctors. Although this behaviour is understandable due to financial constraints, it may turn out to be dangerous as one does not have the required medical expertise to diagnose and treat a problem, which also leads to late detection of several diseases.

A similar trend is seen in the frequency of visits to a dentist’s office where a majority of 53.5% people only visit the dentist only when it is required while our interactions with medical professionals emphasize on regular annual check-ups for a normal individual.

This tendency of the Indian population captured by the survey motivated us further to build a low-cost diagnostic kit. Even though our test is by no means equivalent to a proper medical checkup, it fulfills its motive by being an easily accessible preliminary test. Additionally, we arranged for an awareness talk by a medical professional who specializes in oral cancers. Since our surveyees answered questions via an online survey, we were confident that they would be able to attend the virtual talk as well.

We recognized our responsibility towards the public in disseminating awareness about the ill effects of products like cigarettes, tobacco and alcohol. Not only that, we realized that dental hygiene is rarely talked about in Indian households and dentists are mostly visited when required (supported by survey efforts as well). However, sayings like “Smoking kills” or “Tobacco use is a health hazard” are so common that they have become platitudes for most adults, and it has become challenging to make a difference in their behavioural activities. We collectively arrived at the resolution that awareness must reach young impressionable minds as well as their teachers on the gravity of diseases like oral cancers as well as a dental hygiene guide for them.

We successfully arranged for an awareness talk on Oral Cancer and OSCC by Dr. Himanta Bansal, who is a professor and the H.O.D. of the Department of Oral Pathology at the B.J.S. Dental College, Hospital & Research Institute, Ludhiana. Dr. Himanta touched upon some commonly believed myths, for example, most people assume that e-cigarettes/smokeless tobacco are safer due to the absence of smoke. 1021 people registered for the talk, however, due to limitations of the Zoom license, only 414 people were able to join live on Zoom during the talk duration. For this reason we hosted the talk live on YouTube << a href="https://youtu.be/6yHO3wpGbWw">https://youtu.be/6yHO3wpGbWw> and received more than 700 live participations. 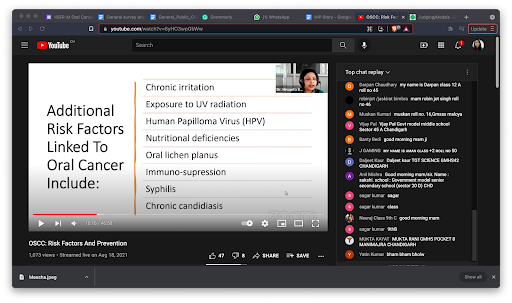 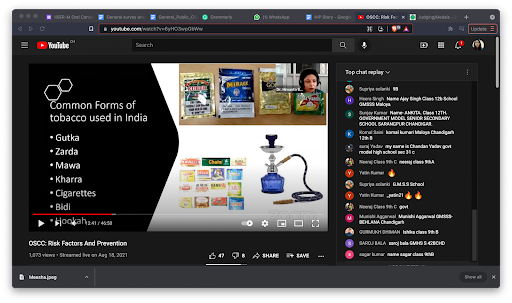 We also made the provision to offer a certificate of participation to those who joined Zoom (link to join Zoom was only given to registered participants, and entry was allowed based on a first-come first-serve basis) and filled an after-talk feedback form. This feedback form consisted of some questions, answers to which helped us to gather insights on the participant population, their opinion on the talk, and other useful feedback. The after-talk feedback form was filled by 101 participants which included various school students and teachers across India (but mainly from Punjab, Haryana and Chandigarh region). 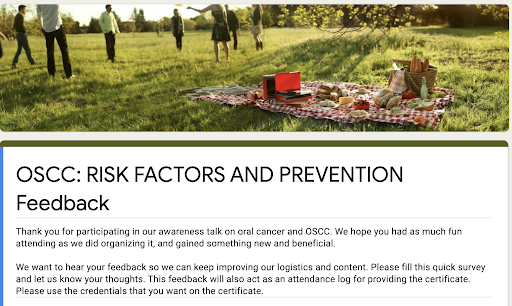 Out of the 101 people that filled the feedback form, 68.3% agreed that the talk was highly relevant and beneficial for them. We also asked the participants to tell us about their key takeaways from the talk and we received an overall positive response.

What we asked: ​​What were your key takeaways from the talk? Few answers we received:

a. Got to know a lot about what are the risk factors and prevention methods of OSCC
b. Informational, statistical and self reflective.
c. All things are good but mam's voice is not clear
d. More such awareness talks should be conducted

Reaching out to College students

We also aspired to reach out to undergraduate students, especially in our own institute, as our college participated in iGEM for the first time in 2 years. We wanted to make sure our juniors knew about iGEM, synthetic biology as well as OSCC. The aim was also to reduce the disconnect due to COVID-19 between the junior-most batch and the IISERM community. Hence, we organised several virtual meetings discussing iGEM, our project and clarifying their questions.

Further, we chose to reach a wider audience of college students by collaborating with Manthan, IISER Mohali’s student-run magazine. We reached out to the writers in the magazine who could relay our message. Three writers from Manthan interviewed our team members where we again addressed iGEM and OSCC. We opened up about some of the hurdles we were facing due to COVID-19 and how we intended to overcome them. After receiving positive feedback from the editors of Manthan and its readers, we thought it would be beneficial to give other teams a platform to talk about their project as well. IISER Bhopal, Manipal University, and IISER Tirupati shared their project details, progress, hurdles, and future course of action and impact. All the articles can be viewed here. 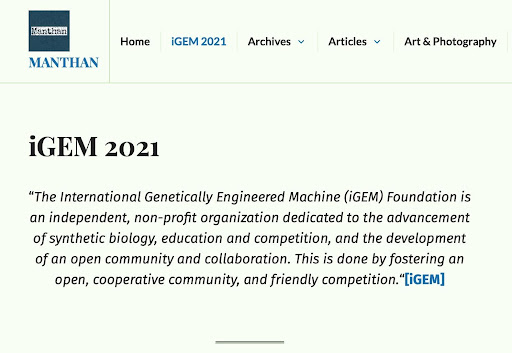