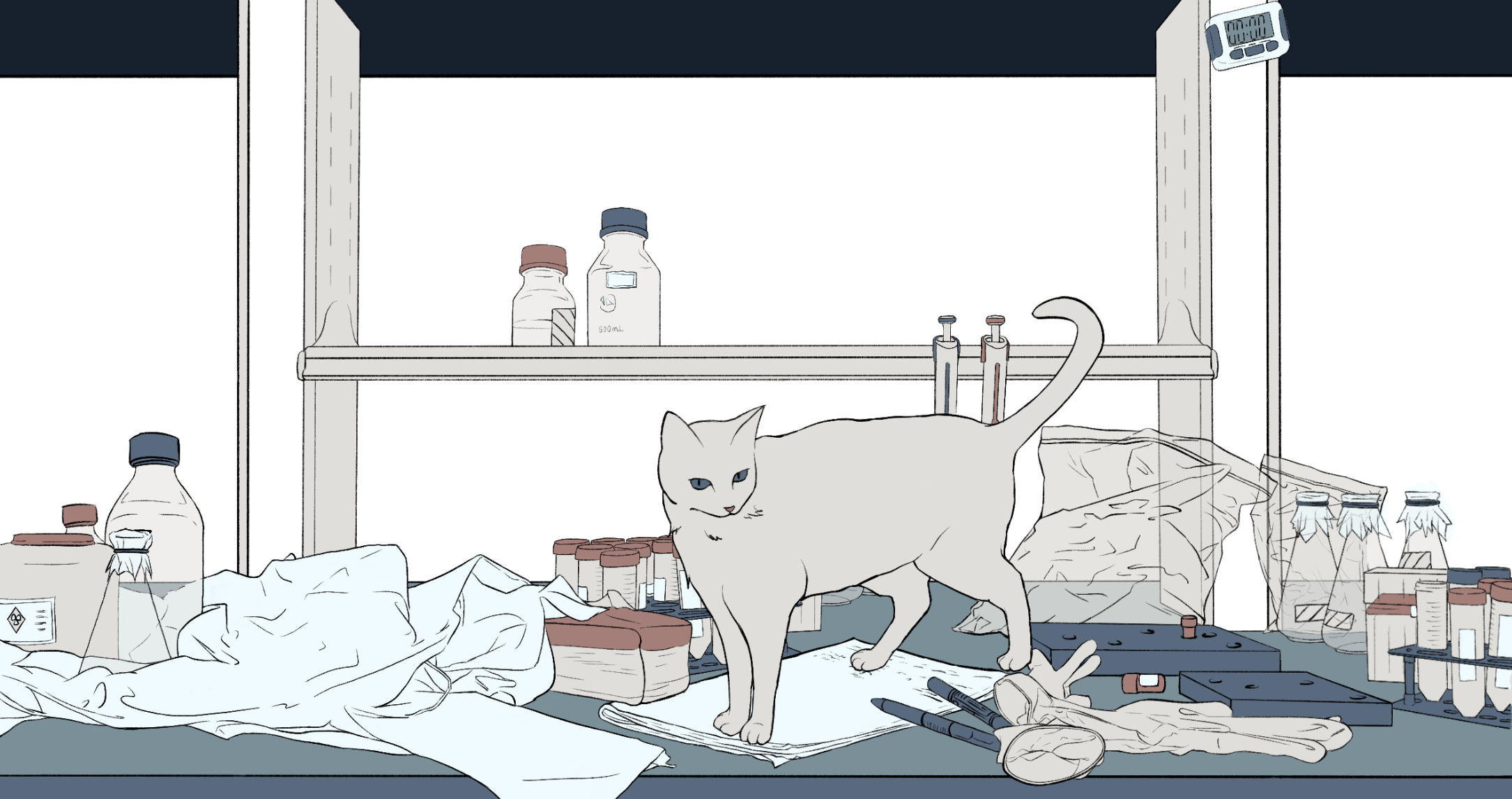 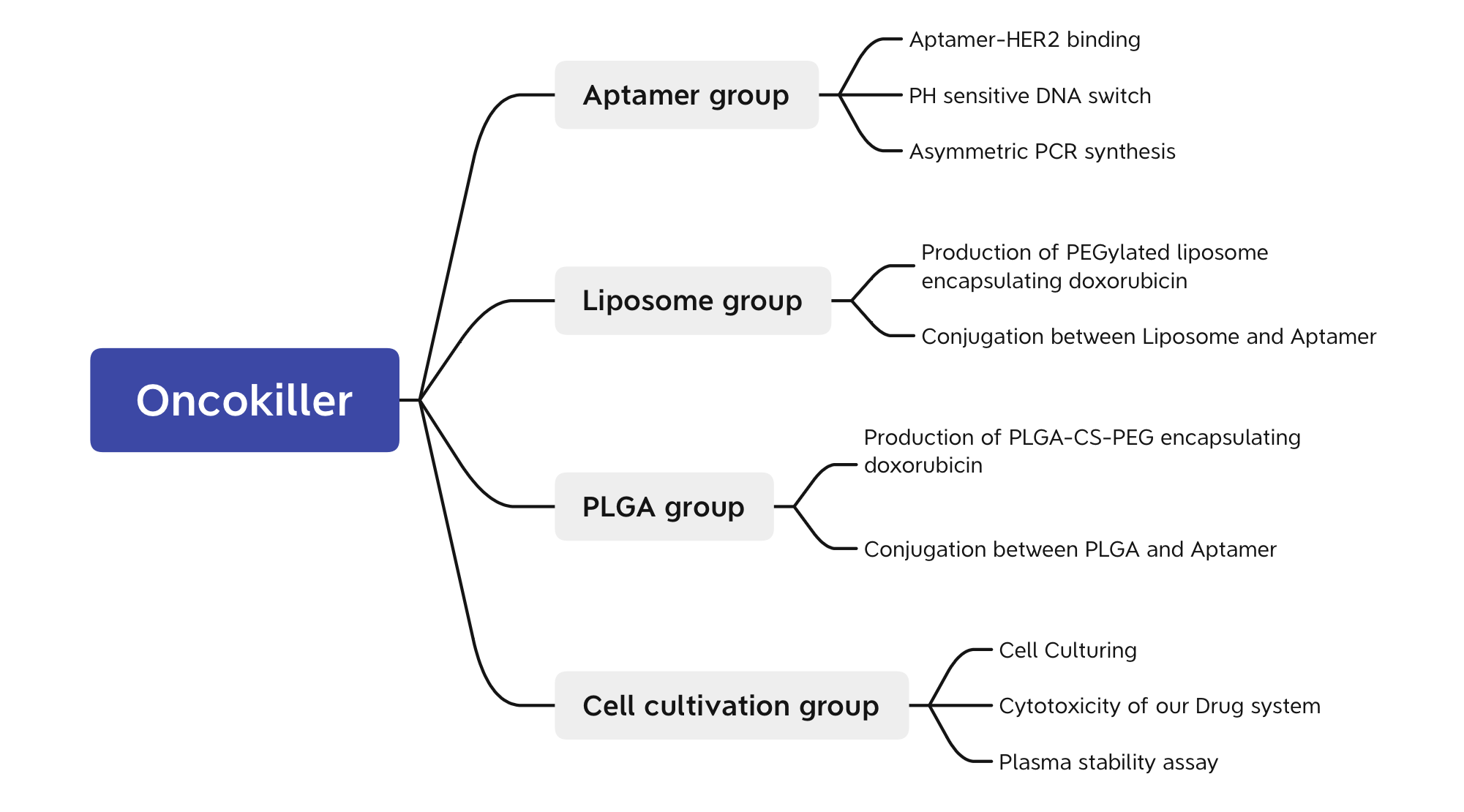 Many experiments have to be done for this sophisticated project, so we organized the experiment into four parts:
1. Aptamer
2. PLGA
3. Liposome
4. In Vitro Verification

Below is our experimental design, which is all the experiments we planned to do (including a brief description of their procedure and principle) in order to produce our final drug.

The result of the experiment can be found on our Results page.

The protocol of the experiment can be found on our Protocol Summary page.

ELONA assay[1] imploys immobilized HER2 protein on well-plate. The aptamer is incubated in the well and free aptamers are washed. The aptamer is either tagged with biotin or FAM, which can be amplified by either Streptavidin-HRP or directly measured under a microplate reader. The higher the value measured, means more aptamers bound on HER2. 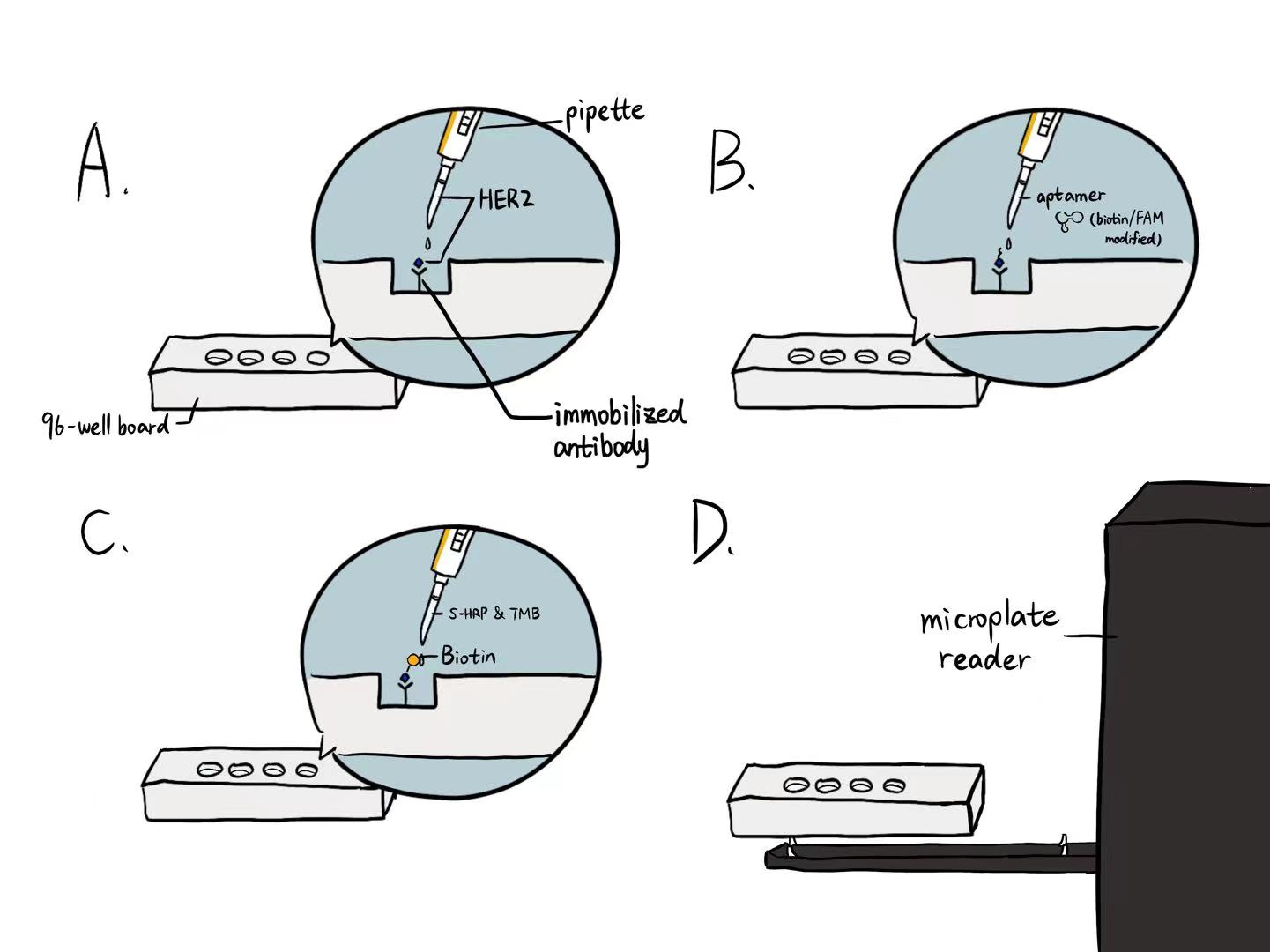 Figure 1 The general process of ELONA assay.A) coating of HER2 onto the well-plate. B) Incubation of aptamer into the well and then wash. C) If biotin-labelled aptamer is used, extra steps of incubation with S-HRP and TMB is performed, separately. D) Tested under microplate reader.

One of the most important designs in our system is the pH-sensitive motif of the aptamer. The pH-sensitive strand displacement aptamer switch system consists of three parts——Aptamer, Intramolecular triplex motif, Displacement strand. This design adopted from previous literature[5][6]. The aptamer is connected to the displacement strand(DS) by an internal triplex domain. Both the target particle and DS can bind to the aptamer. This design allows the aptamer to selectively binding to the target at low pH, without changing the aptamer sequence itself. The spacers are added to reduce the undesired interactions between functional regions.[1]

Figure 2[6] The sequential structure of the pH-sensitive motif.

The 3D structure of the modified aptamer can change between a triplex and a duplex under different pH. This is due to two types of base-pairing: Watson-Crick interaction and Hoogsteen interaction. Conventional base-pairing present in DNA between A-T and C-G are known as Watson-Crick base pairing denoted as "-", also known as complementary base pairing. However, another type of pairing exists as well, known as Hoogsteen base pairing. One of the bases of A-T or C-G is flipped, and hydrogen bonds hold them together as well. However, C·G hoogsteen bonds (denoted as "·")require protonation of Cytosine to form one essential hydrogen bond. A DNA switch can be designed to be pH-sensitive. As shown in Figure 2, the DNA can fold into a triplex under low pH, and unfold into a duplex at high pH. Due to the protonation of cytosine to form C·G bonds, regulating the amount of C·G and A·T present in the switch could regulate its threshold value of folding. 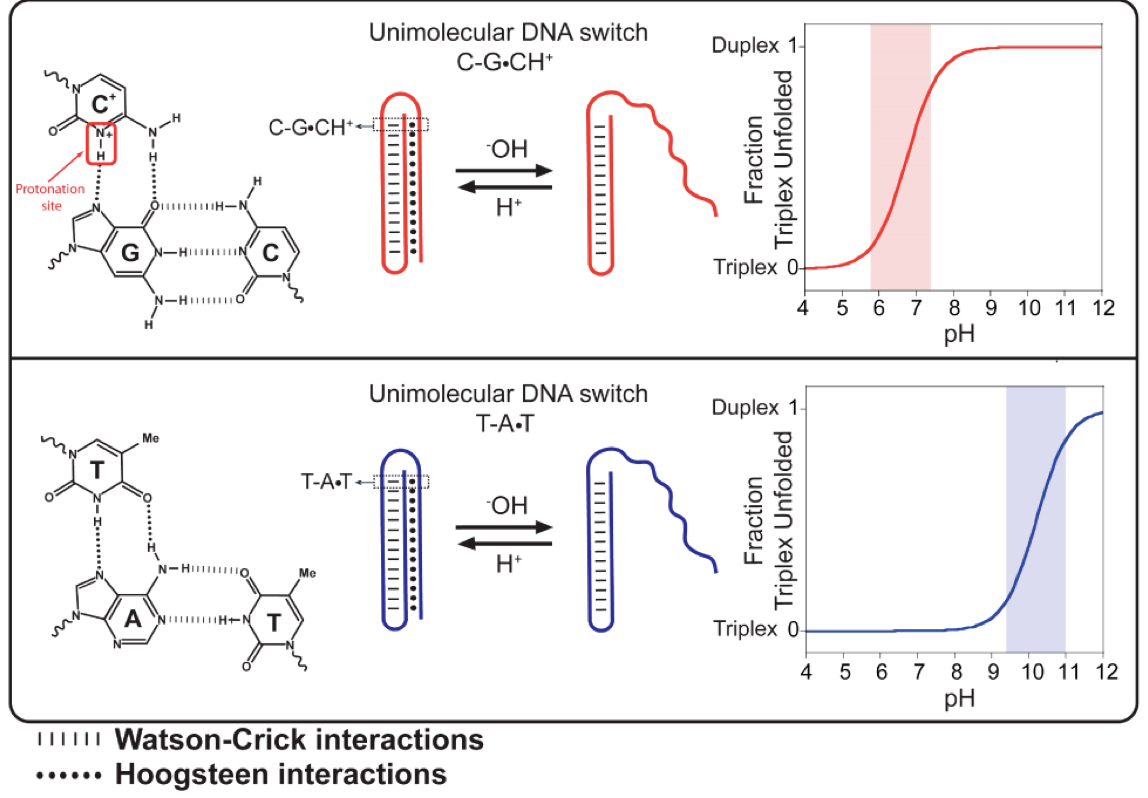 Figure 3[5] A DNA nanoswitch that folds under different pH ranges depending on its proportion of C·G and A·T pairs.

At higher pH, within normal tissues, the mostly unprotonated linker becomes a duplex by Watson-Crick base pairing. The arm of DS region is long enough for it to competitively bind to the aptamer, thus decreasing the affinity for targets due to the present of competitors. 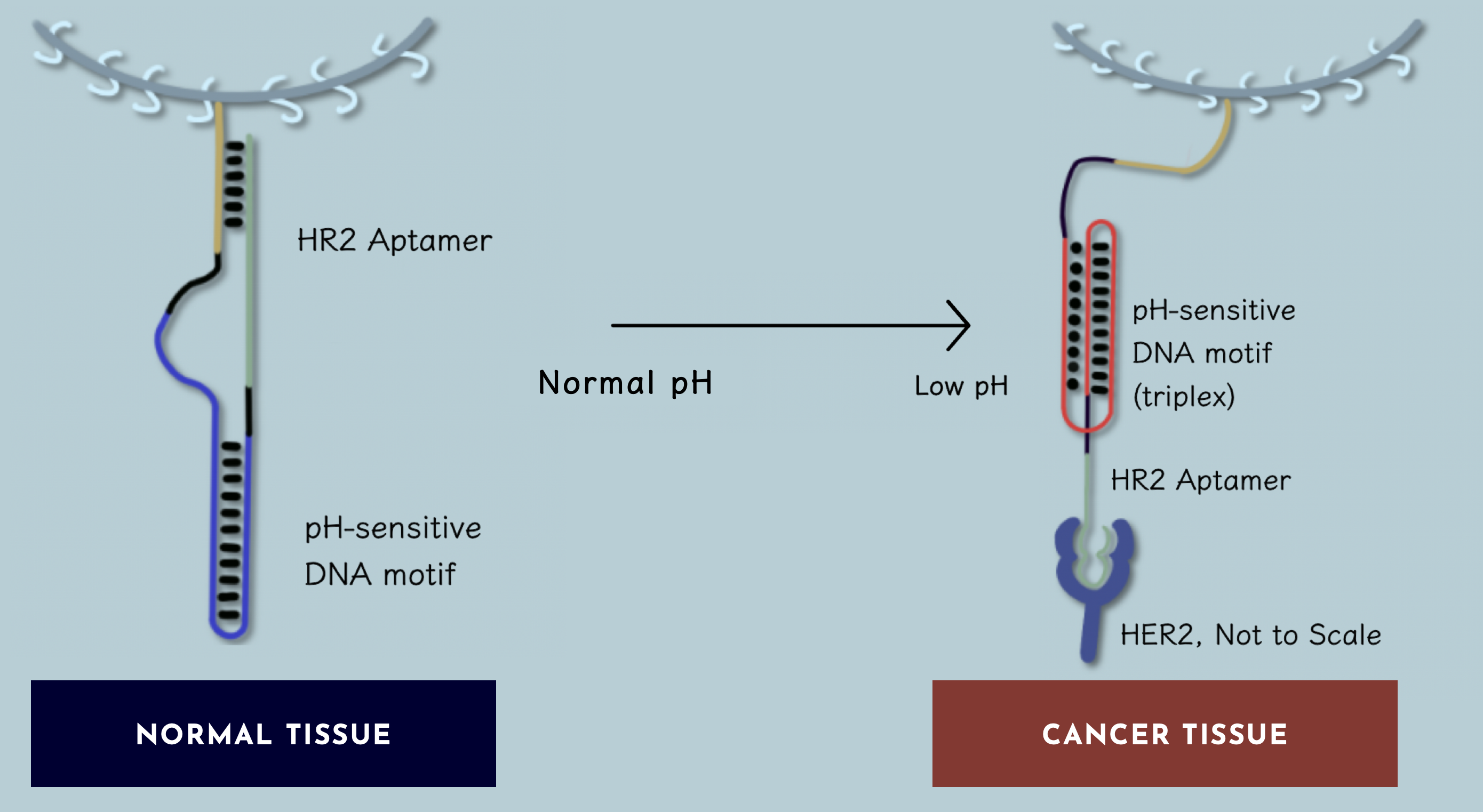 Figure 4[6] The structure of pH-sensitive aptamer under low pH. The linker is a triplex due to Hoogsteen base pairing.

At lower pH, within cancerous tissues, the protonated cytosine bases turn to Hoogsteen base pairing, making the linker a triplex. The arm of DS region is so short that it cannot bind to the aptamer, thus increasing the affinity for targets due to the absence of competitors. We attached the pH-sensitive motif to HR2 aptamer, a full sequence can be found here. To verify the effectiveness of pHs-HR2 aptamer on targeting HER2 and simulate in vivo environment, we plan to perform ELONA under different pH for a single concentration of aptamer (A qualitative test).

After designing the pH-sensitive sequence of the aptamer, we noticed that it is too long (145 bp) to be synthesized by chemical methods. Thus, we plan to split the aptamer sequence into 2 partially complementary 'pre-aptamer' sequences, which can be synthesized chemically.

After linking the 2 'pre-aptamer' sequences using PCR, we plan to utilize asymmetric PCR (asPCR), an analog of normal PCR but with different concentrations of forward and reverse primer, to generate ssDNA from the dsDNA template. As, previous literature has shown that with a forward: reverse primer ratio of 20: 1, the asPCR could generate a maximum amount of more than 50% of ssDNA[7], we plan to a similar primer ratio. (The capability of asPCR to generate ssDNA can be rationalized that as the PCR cycle proceeds, the less concentrated primer will be eventually used up, and by then the system can only generate ssDNA from the only available primer). The graphic illustration of the PCR strategy is shown in Figure. 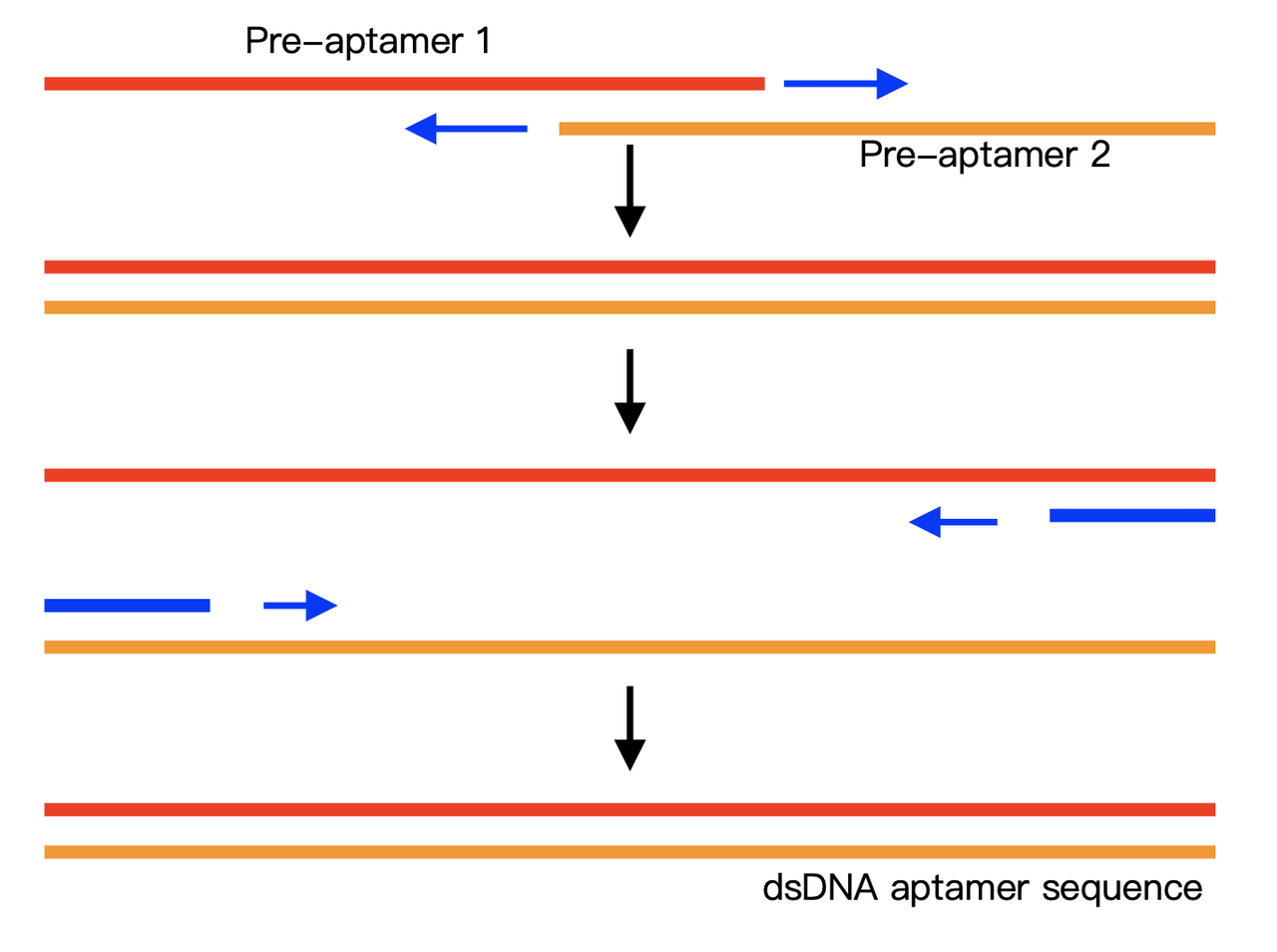 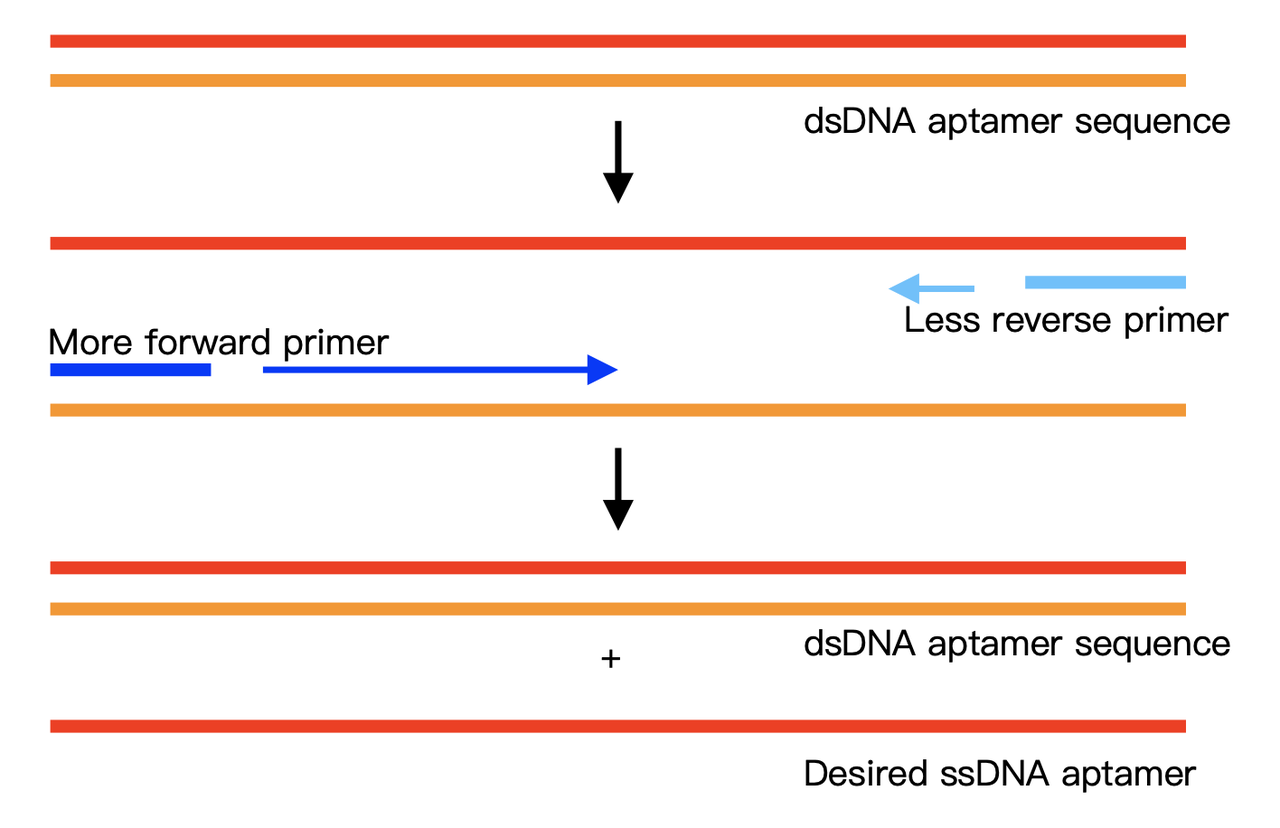 After PCR, we plan to verify the presence of ssDNA with agarose gel electrophoresis, for the speed by which ssDNA travels will deviate from that of the dsDNA generated, and eventually the single strands will be separated and can be extracted for use.

The coating of CS-PEG layer on PLGA to form PLGA-CS-PEG nanoparticle is a double-step procedure.

Secondly, the PEG chains are attached to the PLGA-CS complex due to the hydrogen bonds forming between amino groups on the chitosan and the electrons of oxygen atoms of the PEG molecules.[3] 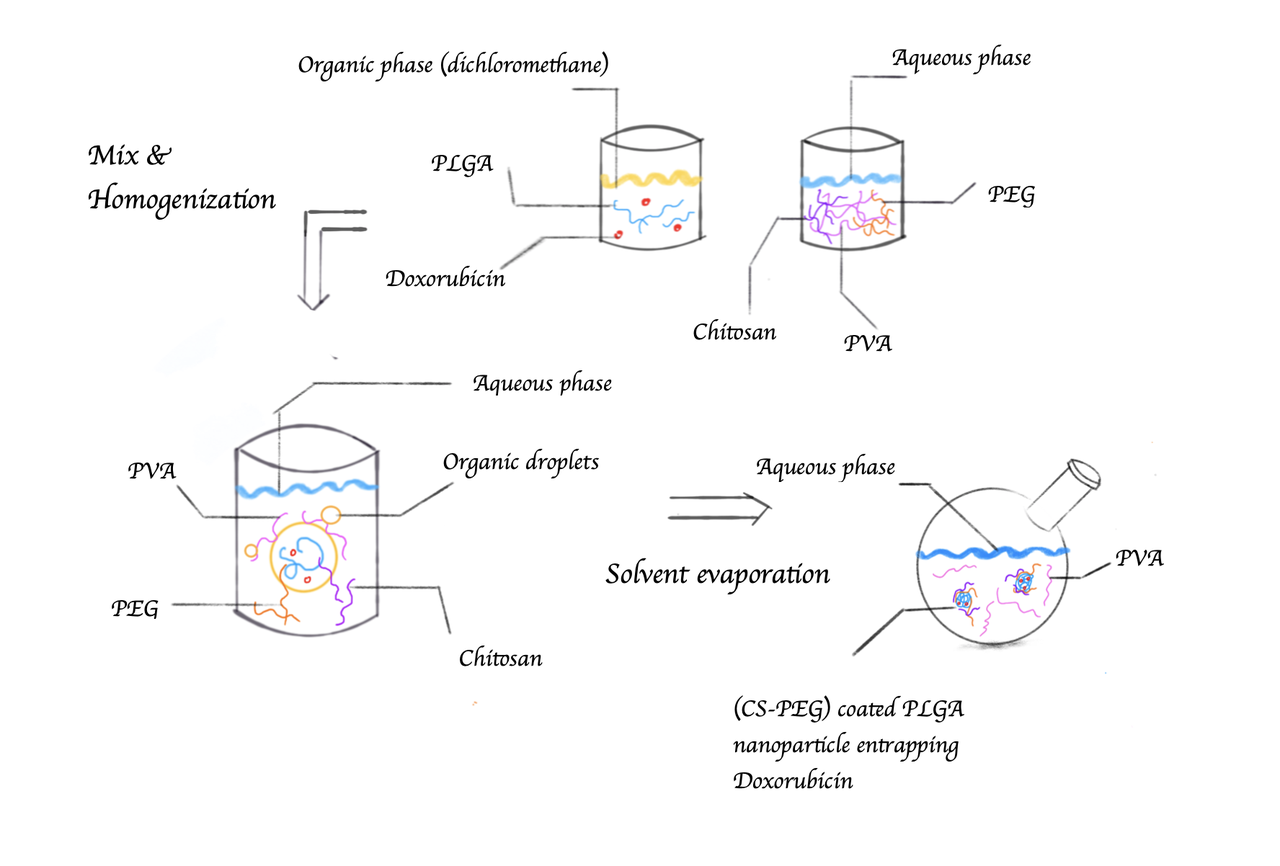 Through FTIR(Fourier Transform Infrared Spectrometry) and TEM (Transmission Electron Microscopy), we were able to prove the existence of suitable sized nanoparticles in our resulting product.

To prove the successful encapsulation of doxorubicin in PLGA nanoparticles, we plan to apply HPLC (High-Performance Liquid Chromatography). Both drug-containing nanoparticles and drug-free nanoparticles were tested for comparative analysis[2]. 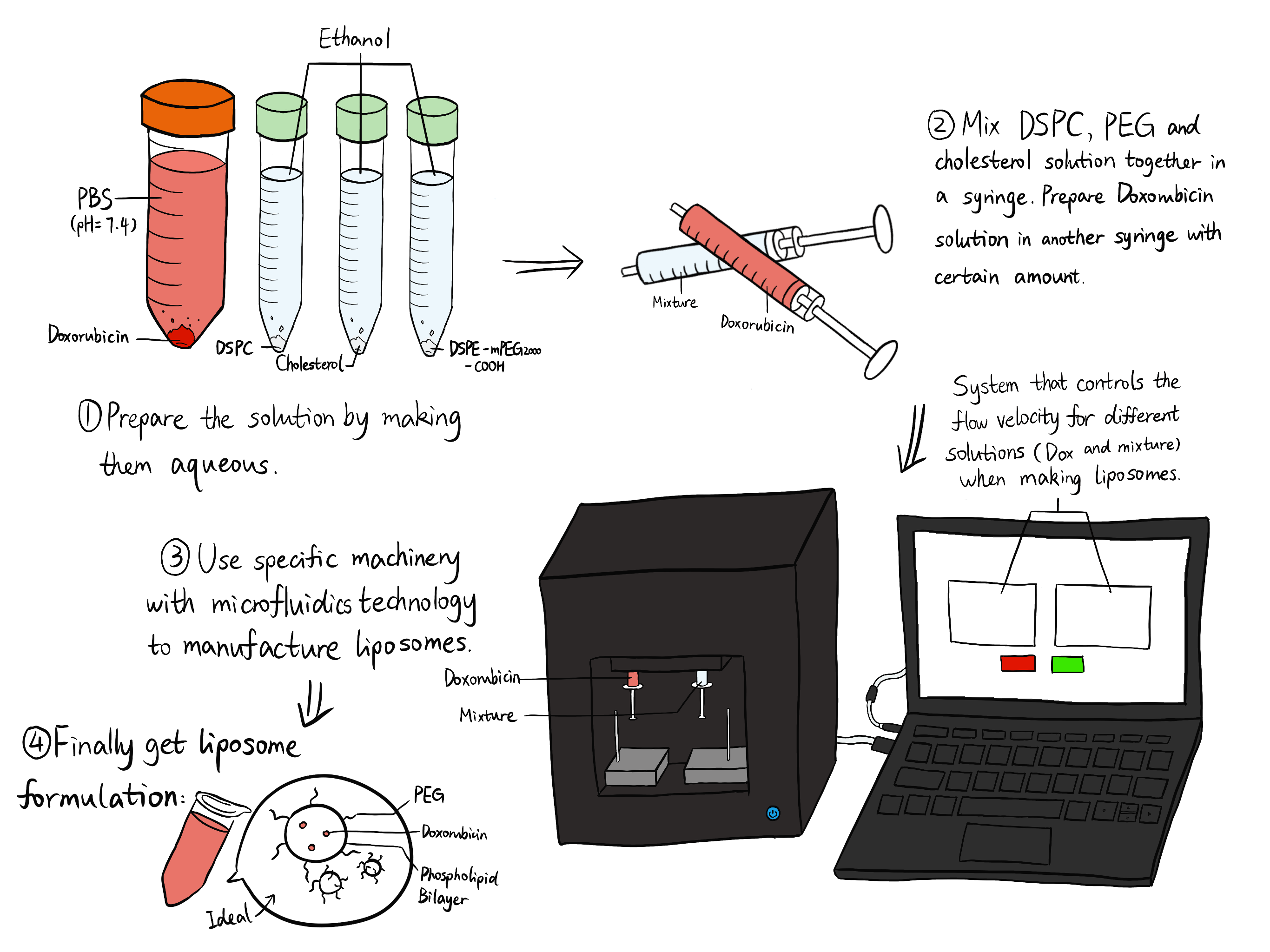 Figure 7 Method used for the production of PEGylated liposome nanoparticles.

For liposome, since it possesses the same issue as PLGA( the rapid opsonization by phagocytes in the blood circulation ), we will further stabilize it by applying a surface modification using PEG. This can significantly prolong the half-lives of the liposome nanoparticles. The PEG chains attach to liposomes due to the hydrogen bonds, similar to the binding between PEG and PLGA.

Then, we will calculate the encapsulation efficiency of doxorubicin in the nanoparticles by the formula below.

The final drug amount is obtained by measuring the amount of drug recovered from destroyed liposomes by Triton X-100, a surfactant breaking down the spheres of liposomes.

Conjugation between Nanoparticles and Aptamer:

Conjugation between nanoparticles and aptamers is an important section of our project, as it combines the two important functions—killing & targeting.

The conjugations of aptamer-liposome and aptamer-PLGA are similar, and thus they are demonstrated together. By modifying aptamers with an amine group at the 3' end, we linked the aptamer to the exterior carboxyl ends of the nanoparticle with cross-linking agents N-hydroxy-sulfo-succinimide (NHS) and 1-ethyl-3-(3-dimethyl-aminopropyl) carbodiimide (EDC), which assist the amide formation between the aptamer and the nanoparticle. The mechanism of the reaction was given in the Figure below. 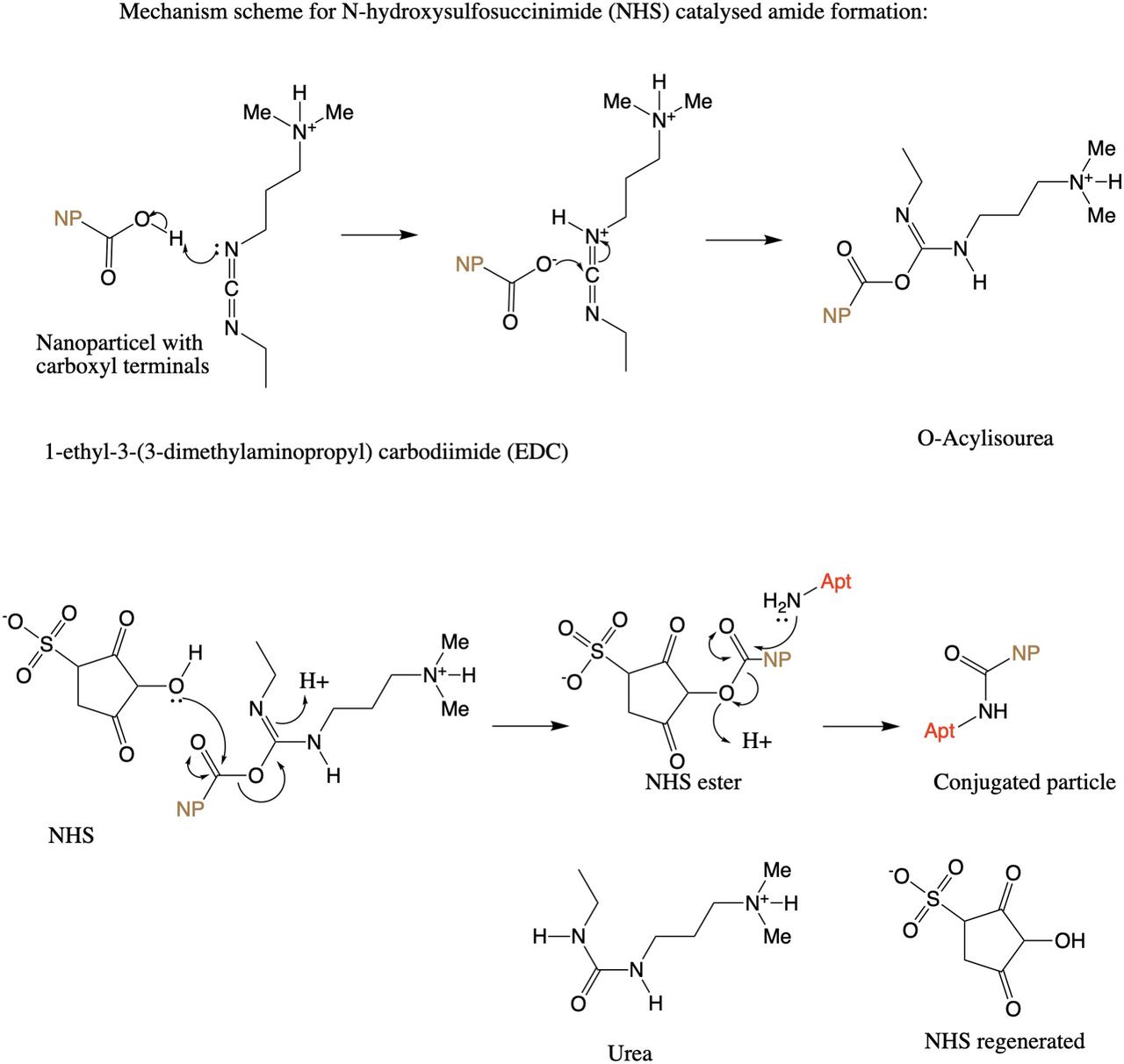 Figure 8 Mechanism scheme for the conjugation between aptamer and nanoparticle. The nanoparticle is represented by 'NP' in brown; the aptamer is shown by 'Apt' in red. The O-Acylisourea intermediate produced form EDC and the carboxilic acid, which is not very stable, is immediately attacked by NHS forming an NHS ester, which is more stable than O-Acylisourea and maintains adequate leaving group ability that allows for efficient conjugation to primary amines.[8]

In Vitro Verification of Drug System

In order to prove the effectiveness of our drug delivery system. We set up several cell experiments, including cell culturing, cytotoxicity of the system, and the plasma stability assay verify different properties of our system.

Cell culturing is the first step of testing the cytotoxicity of our system. It is crucial to cultivate cancer cells for the following experiments.

Cytotoxicity of our Drug system

By incubating our drug with cells, we were able to verify the cytotoxicity of our drug system as well as the effectiveness of our aptamer.

We will incubate our drug with the cancer cells and test the cell viability at regular intervals using CCK-8 (Cell Counting Kit 8). CCK-8 test will allow us to use a microplate reader to quantify the number of live cells. We will cultivate the cancer cells with the addition of our two drug delivery systems——PLGA-based and liposome-based system, and identify the cell viability. Cell Counting Kit-8(CCK-8) is a widely used test kit for cytotoxicity and cell proliferation. It contains a chemical called WST-8, which will react with 1-Methoxy PMS. The slightly yellow WST-8 will turn to WST-8 Formazan orange dye as the dehydrogenase in mitochondria is reduced. The faster and more the cells proliferate, the darker the color; the higher cytotoxicity, the lighter the color. The depth of the color is directly proportional to the number of living cells, which can be used to analyze cell proliferation and cytotoxicity directly. 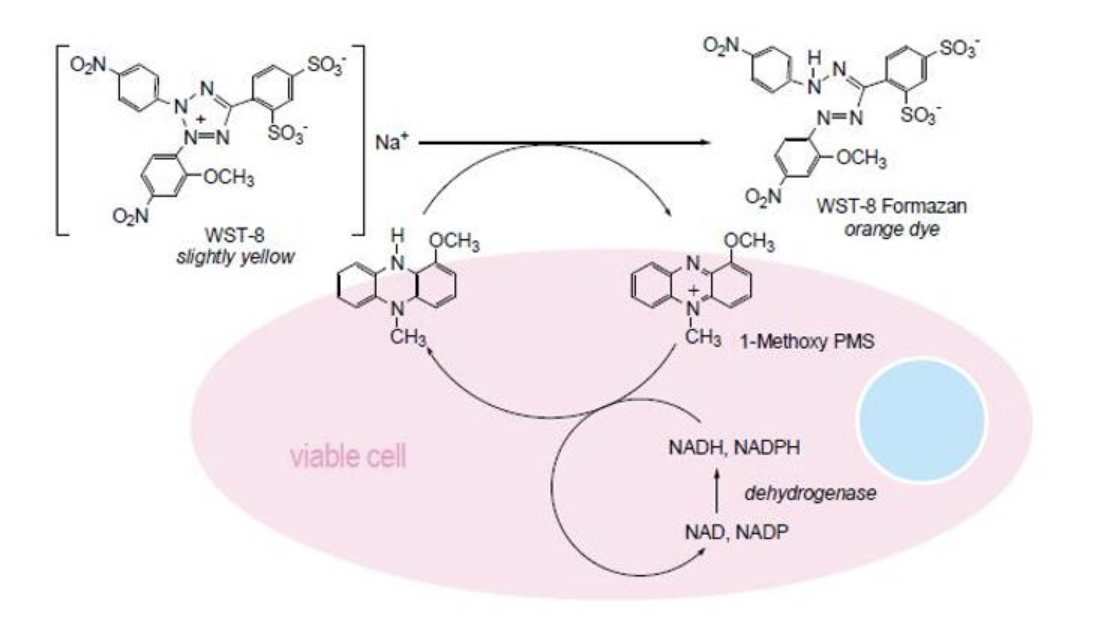 To verify the stability of our system, we plan to carry our plasma stability assay to find out its half-life within the body. The drug will be incubated in blood plasma and then the resulting solution will be separated using HPLC.[9]

Improving stability is an important aspect of our system. A lack of stability will directly result in serious side effects since toxins will be released in the bloodstream or taken in by various cells such as phagocytes.

To verify the stability of our system, we plan to apply a method called plasma stability assay to find out the half-life of our drug delivery system within the body. The drug will be incubated in blood plasma to mimic the in vivo environment and then the resulting solution will be separated using a machine called HPLC(High-Performance Liquid Chromatography). We will then calculate the amount of drug maintaining, compare the data with the original amount of drug, and thus deduce the half-life of the system.

HPLC can separate the matters dissolving in a solvent due to the different flow rates of various particles on an absorbent(column of the machine), and give the quantity of each component. In this case, we separate doxorubicin, the toxin we apply, and other parts of our system to calculate the amount of drug remaining.[9] 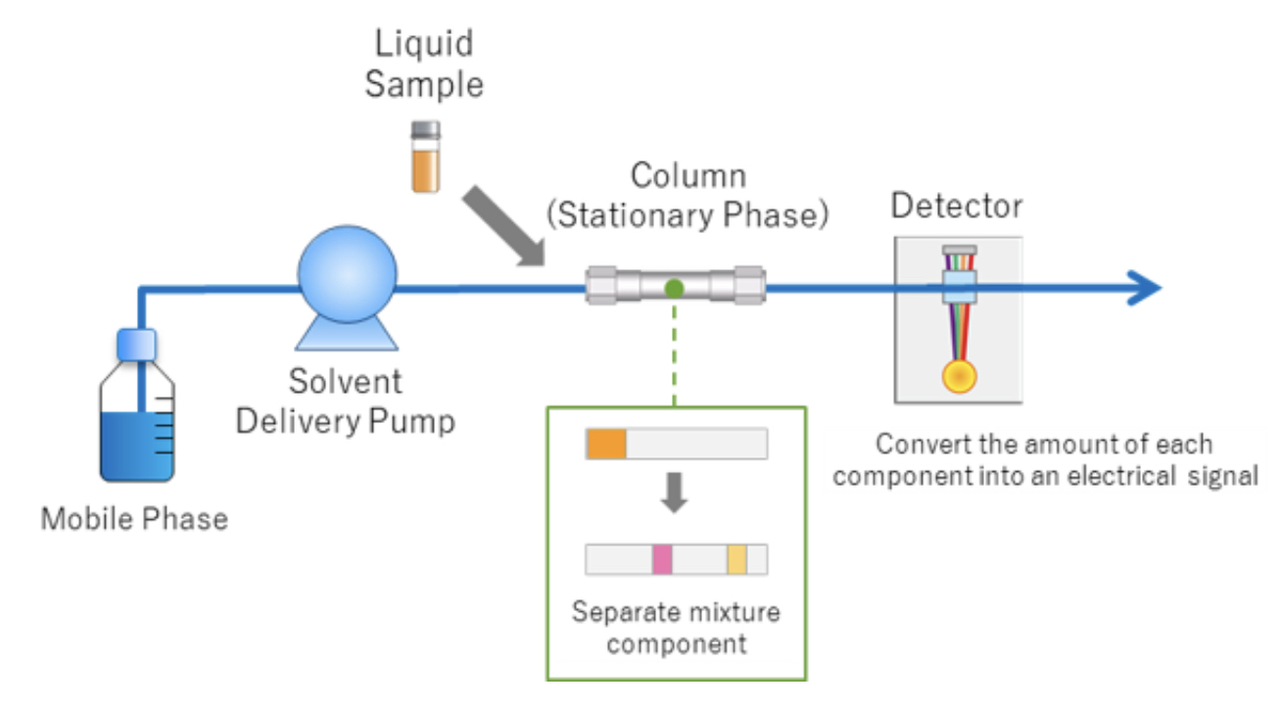