After browsing large amount of previous teams’ wiki and research papers, our team concentrated contributions to two registry pages of two parts- Part:BBa_K1781002 and Part:BBa_K1694005, therefore our Contribution was made up of detailing scFvs and ZHER2 comprehensively and presenting new research direction of future IGEM team.

To work efficiently in E.coli—scFvs Improvement of solubility and biological activity of the inclusion bodies of scfvs(Part:BBa_K1694005)

In this year's contribution part, we move our focus on the newly-released technique-Single-chain variable fragment antibodies (scFvs) which is Part:BBa_K1694005. Single chain variable fragment antibodies (scFvs) have attracted much attention due to their small size, faster bio-distribution, and better penetration into the target tissues, and ease of expression in Escherichia coli. It gave a new opportunity for modern breast cancer treatment.

Because of these advantages, our team provides some supplements to this part page. As scFvs are small and non-glycosylated proteins, they can be easily overexpressed in eukaryotic hosts such as Escherichia coli (E. coli). However, highly expressed scFvs usually accumulate as unfolded protein aggregates, which are called inclusion bodies (IB). As a result, dissolving and refolding of protein from IBs become a challenging task.

According to our research, a team from Iran completed a series of experiments to investigate how different types, concentrations, pHs, and additives of denaturing agents affect the IBs solubility of HER2 scFvs.

First, inspired by the team, better solubility of anti-HER2 scFv IBs can be achieved in this way.

The data below obtained by the team by dissolving Isolated anti-HER2 scFv IBs in different concentrations of urea or GdnHCl and also their combinations. Inclusion bodies were also dissolved in solubilizing agent at different pH. With the results from previous experiment, other solubilizing agents at pH 11 containing urea 6 M with different reducing agents were also used to solubilize anti-HER2 scFv IBs. Furthermore, as BME was selected in this experiment from other addiitives, a new round of data were obtained with urea (6 M) at pH 11 supplemented with different concentrations of BME. 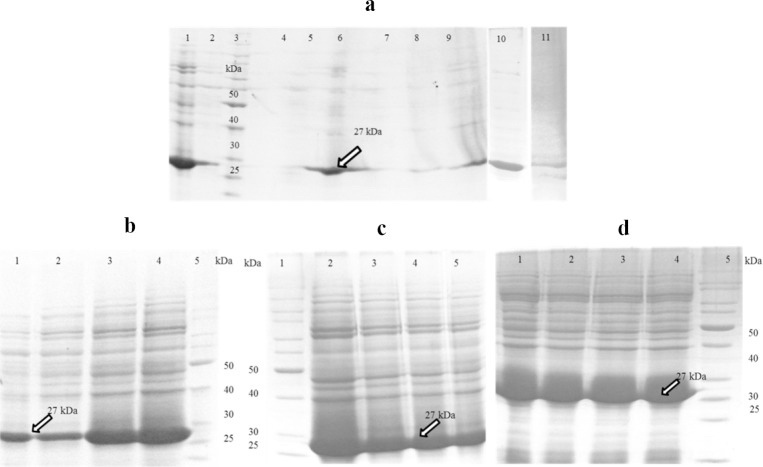 After analysing the data above, we can get our results and first improvement, urea 6 M solubilizes more IBs compared with other solubilizing agents. The effect of pH on the yield of IBs solubilizing was also checked out and the optimum pH was 11 (Fig. 1b). Inclusion bodies were also dissolved with urea 6 M at pH 11 in the presence of DTT, BME or n-propanol and our results showed that addition of BME to the solubilizing buffer resulted in improvement of IBs solubilization (Fig. 1c). Different concentrations of the reducing agent were also examined and most IBs were dissolved with urea 6 M at pH 11 containing 4 mM BME (Fig. 1d).

Ten buffer additives were chosen and used in combination for Plackett-Burman design [Table 1]. Six factors (tricine, arginine, glucose, citric acid, betaine, and imidazole) out of 11 factors had 88.8% contribution in refolding of anti-HER2 scFv. Tricin, arginine, and imidazole had positive effects while other buffer additives showed negative effects [Table 2]. The optimum concentration of the three variables with positive effect was further evaluated by Box-Benhken design. The results of 15 runs designed by Box-Benhken model are summarized in [Table 3]. 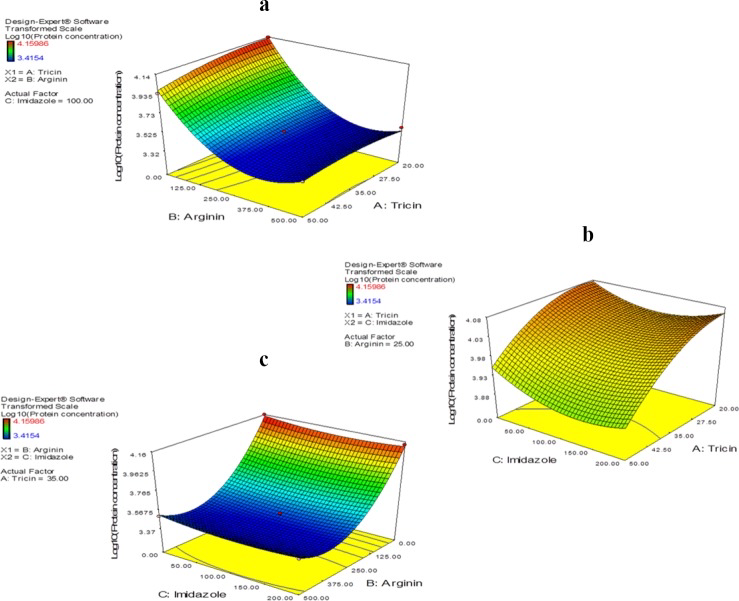 At last with the help of the response surface quadratic mode, the experiment suggest that the optimum concentrations of three buffer additives for refolding of anti-HER2 scFv were tricine, 23 mM; Arginin, 0.55 mM; And imidazole, 14.3 mM.

Improvement and New Application for ZHER2(Part:BBa_K1781002)

Another focus for this year’s contribution part is Part:BBa_K1781002, ZHER2. The human epidermal growth factor receptor 2 (HER2) is specifically overexpressed in tumors of several cancers, including an aggressive form of breast cancer. It is therefore a target for both cancer diagnostics and therapy. The 58 amino acid residue Zher2 affibody molecule was previously engineered as a high-affinity binder of HER2. ZHER2 binds to a conformational epitope on HER2 that is distant from those recognized by the therapeutic antibodies trastuzumab and pertuzumab. Its small size and lack of interference may provide Zher2 with advantages for diagnostic use or even for delivery of therapeutic agents to HER2-expressing tumors when trastuzumab or pertuzumab are already employed. Biophysical characterization shows that Zher2 is thermodynamically stable in the folded state yet undergoing conformational interconversion on a submillisecond time scale. Our team will provide some improvements and new applications to the parts page with the help of papers. 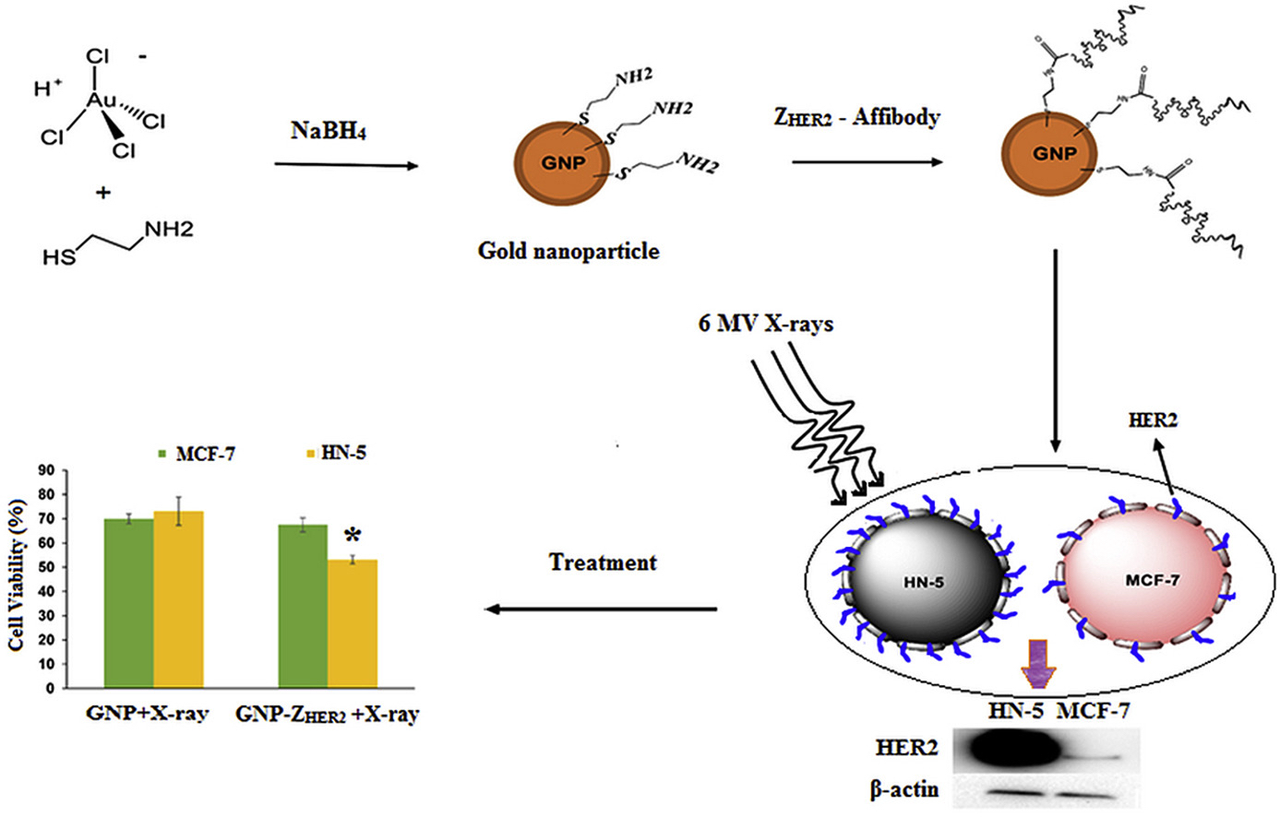 The picture above is a review of a project of an Iranian team, which gives us a new enhancement of X-ray radiotherapy by specific delivery of ZHER2 affibody-conjugated gold nanoparticles to HER2-positive malignant cells. The most significant results must be the induced radiosensitizing effect of cysteamine-coated GNPs on four different malignant cell lines exposed to X-ray radiation of megavoltage energy. Induced cytotoxicity of trastuzumab-coated GNPs in combination with X-ray radiation against HER2-positive breast cancerous cells has been shown.

After employing ZHER2 affibody for specific delivery of GNPs to different HER2-positive cell lines, results showed that coating of GNPs with affibody could improve the potential of X-ray in ablation of cells treated with GNPs. As seen in the figure, affibody has increased the efficiency of X-ray radiation in killing HER2-overexpressed SK-BR-3, HN-5, and SK-OV-3 cell lines. The efficiency of GNP + X-ray combination therapy on HER2-overexpressed cell lines was improved by 10–20% following ZHER2 conjugation to the surface of the prepared GNPs. These results confirm the importance of GNP targeting for efficient X-ray radiation therapy of tumor cells. According to the experiment of this team, GNP-ZHER2 can be conjugated with x-ray radiation, which significantly reduces the viability of Her2 - overexpressed cancerous cells, making treatments more effective. Future researches can continue to explore the combination of x-rays radiation and targeted therapy to improve cancer treatment efficacy. 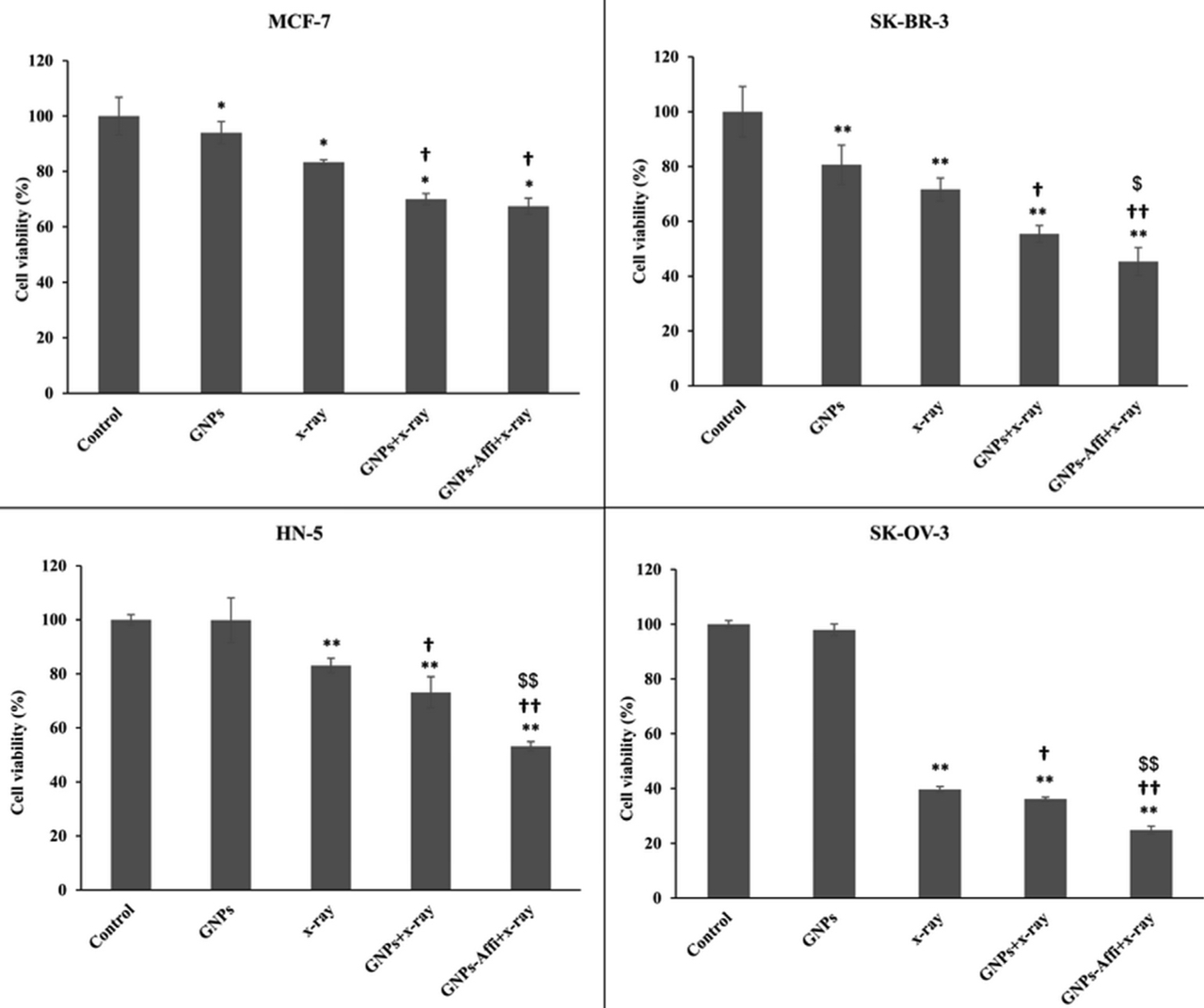 Better drug delivery—Hyperthermia-triggered intracellular delivery of an anticancer agent to HER2+ cells by HER2-specific affibody (ZHER2-GS-Cys)-conjugated thermosensitive liposomes (HER2+ affisomes). 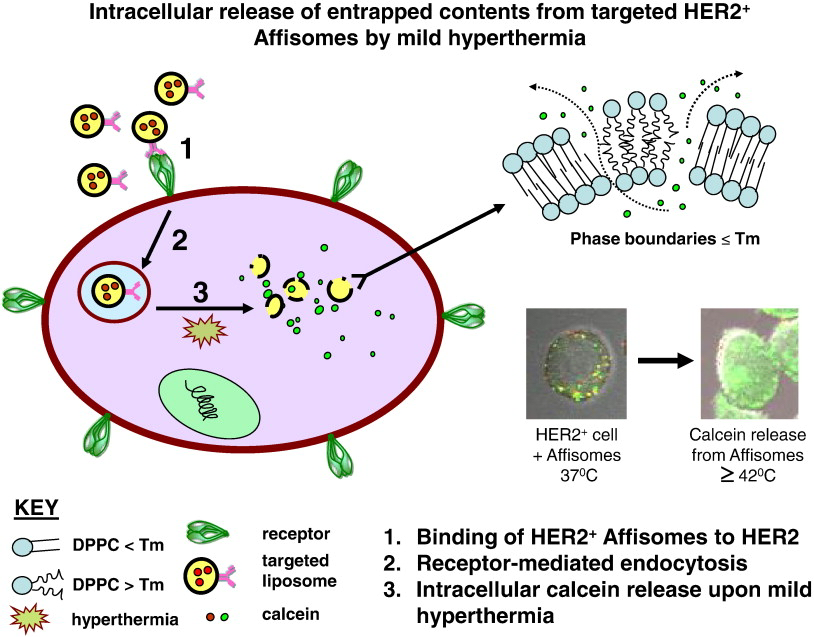 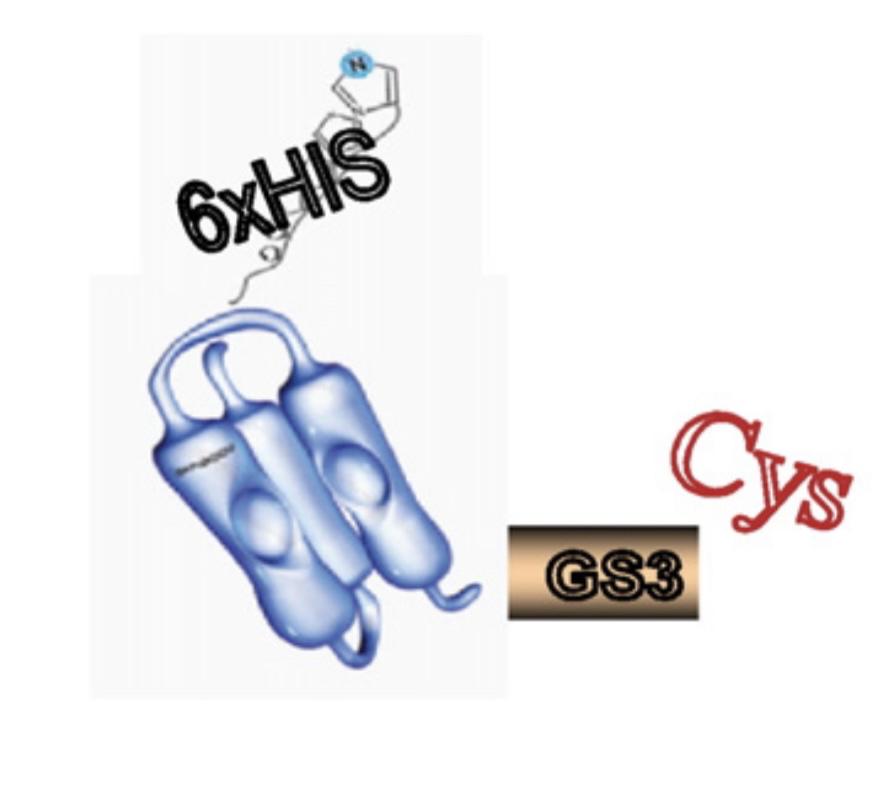 Fig.6[4]Design of ZHER2-GS-Cys includes introduction of a spacer (glycine–serine linker) at the C-terminus before cysteine residue. The N-terminus also includes a histidine tag (6× His).

This new design was raised by a team from the USA through examining the localized delivery potential of these affisomes by monitoring cellular interactions, intracellular uptake, and hyperthermia-induced effects on drug delivery. According to their experiment, ZHER2:342-Cys was modified, by introducing a glycine–serine spacer before the C-terminus cysteine to achieve accessibility to the cell surface-expressed by HER2.

Also, results showed that HER2+ affisome/SK-BR-3 cell complexes have cytosolic delivery at 45 °C, with no effect on cell viability under these conditions. Similarly, DOX-loaded HER2+affisomes showed at least 2- to 3-fold higher accumulation of DOX in SK-BR-3 cells as compared to control liposomes. Brief exposure of liposomes–cell complexes at 45 °C prior to the onset of incubations for cell killing assays resulted in enhanced cytotoxicity for affisomes and control liposomes. Compared the experiment's results with Doxil (a commercially available liposome formulation), which showed significantly lower toxicity under identical conditions. Therefore, the results prove the better performance of ZHER2 in the drug delivery area, and ZHER2 encompasses both targeting and triggering potential and hence may prove to be viable nano-drug delivery carriers for breast cancer treatment. 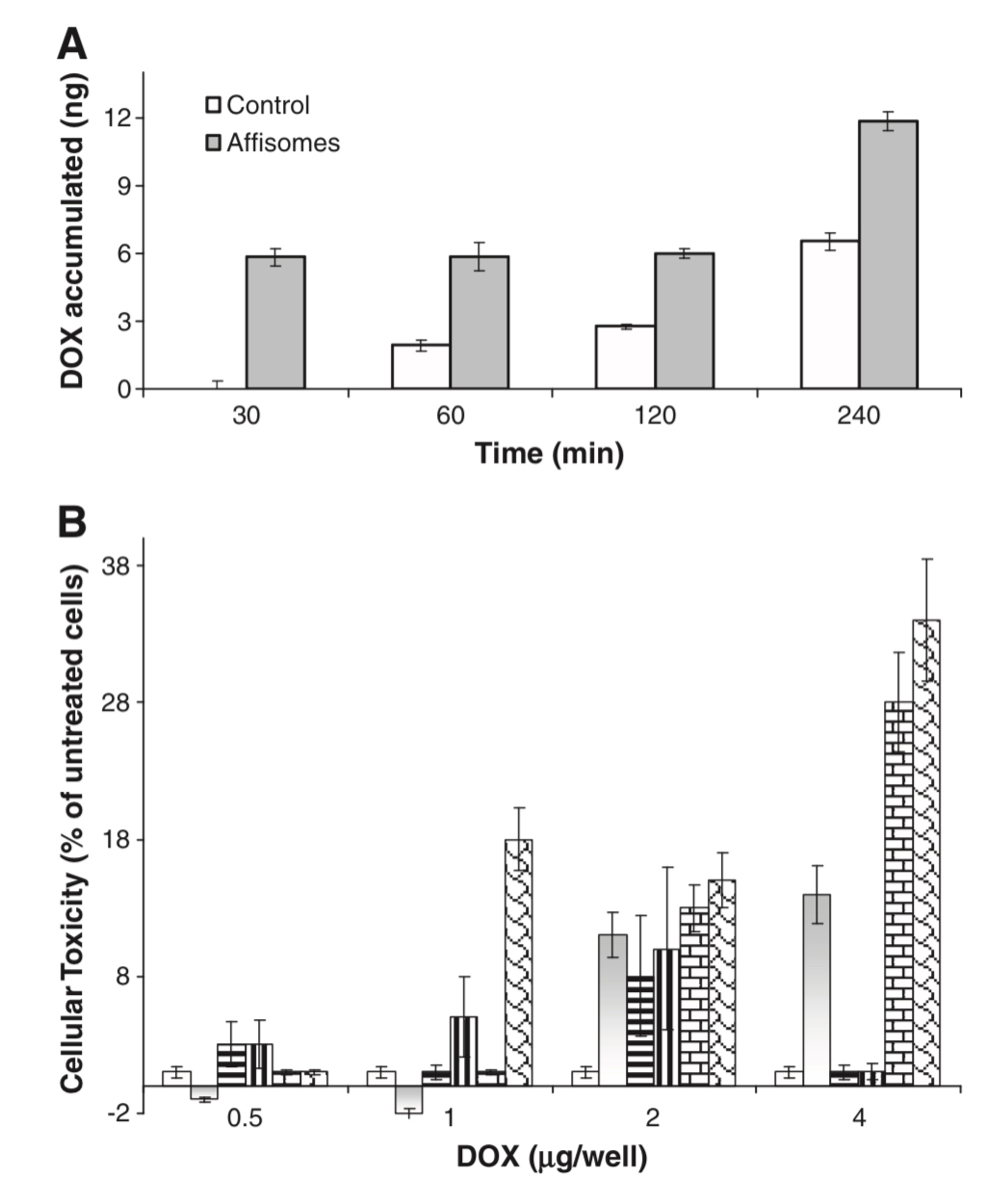 With the help of several papers, our team successfully added the detailed data which help to improve scFvs inclusion bodies’ solubility and biological activity of scFvs, Part:BBa_K1694005, may help the future team when designing and proceeding the project relay to scFvs. What’s more, our team suggested two new applications for ZHER2, Part:BBa_K1781002, one from nanoparticles perspective which makes effort in radiotherapy, and the other from liposome perspective which makes effort in drug delivery. Hope these can give the future team new directions on cancer therapy projects.