In order to find appropriate promoters, we obtained RNA-Seq datas from wild type SCUT-3 cultured on feather and chitin. Based on RNA-Seq data, using TPM as the gene expression intensity evaluation index, 9 candidate promoters were selected in total (Figure 1). These nine promoters are pro1380, pro2953, pro3035, pro3040, pro3071, pro05270, pro15290, pro22610 and pro24880. The lengths of these promoters are shown in Table 1.

To verify the actual expression strength of the selected promoters, we chose enhanced green fluorescent protein eGFP as the reporter gene. After replacing the ermE promoter located on the Streptomyces integrative plasmid pSET152 with the promoters cloned, we obtained the recombinant pSET152 vector carrying different promoters. The colony PCR results are shown in Figure 3.

pSET152 is an integrated plasmid. After the recombinant pSET152 vector was introduced into SCUT-3, the plasmid will be integrated into the genome of SCUT-3. Therefore, we can design primers with the plasmid base sequence to identify positive conjugant. After identification, 8 promoters-eGFP expression vectors were successfully integrated into the SCUT-3 genome respectively, as shown in Figure 4. 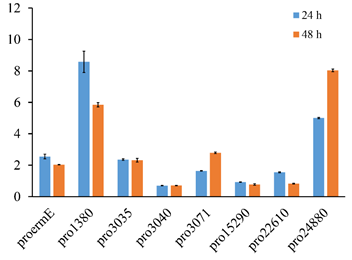 In our previous work, we found that co-overexpression of CDO1 and SEP39 (both used constitutive promoter ermE, which was named SCUT-Ocdo-Osep39, increased SCUT-3’s feather degrading efficiency but SCUT-Ocdo-Osep39 showed lower bacterial cell copy number than wild-type SCUT-3. To obtain stronger industrial feather-degrading strains, we decided to genetically modifying these SCUT-Ocdo-Osep39 strains by replacing promoter ermE with the promoters we have chosen. Fortunately, we successfully constructed SCUT-Ocdo-p1380-Osep39, SCUT-p22610-Ocdo-Osep39 and SCUT-Ocdo-p24880-Osep39 strains by using promoter pro1380, pro22610, pro24880 respectively. The colony PCR results are shown in Figure 6. 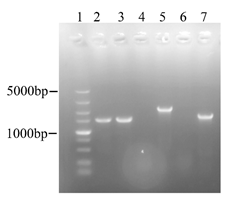 Feather degradation by FDB (Feather degrading bacteria) is completed by the integration of two processes, disulfide bond reduction and protease hydrolysis. CDO is a non-heme mononuclear iron enzyme that oxidizes cysteine to cysteine sulfinic acid, which is then dissimilated by aminotransferase into pyruvate and sulfite. In SCUT-3’s feather degradation, overexpression of CDO1 increased SCUT-3’s single-cell feather degradation efficiency. SEP39 is a major protease involved in SCUT-3’s keratin hydrolysis, and previous work showed that its overexpression could increase SCUT-Osep39’s keratinase activity. We previously showed that co-overexpression of CDO1 and SEP39 by using constitutive promoter ermE increased SCUT-3’s feather degrading efficiency, which implied that CDO and SEP39 play an important role in the degradation of feather. However, we also found that SCUT-Ocdo-Osep39 showed lower growth rate than wild-type SCUT-3. To increase the degradation efficiency of SCUT-3 and not affect the growth of SCUT-3, we constructed recombinant Streptomyces by using promoters we select to replace ermE.

Fig. 7 showes the keratinase activities of SCUT-3 and this 4 recombinant groups in in 10% CFM fermentation at different times. From the picture, we can see SCUT-Ocdo-p24880-Osep39 demonstrated highest keratinase activity at 48 h. This affirmed that p24880 can be further used to replace ermE for feather degradation. 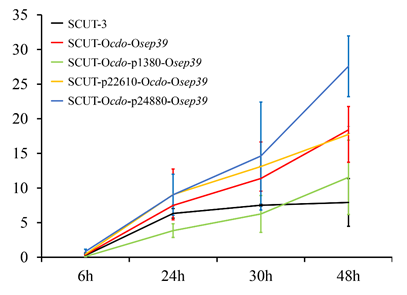 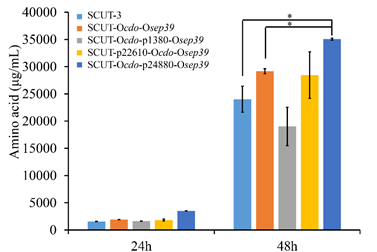 Figure 8 Amino acid content from SCUT-3 and recombinant SCUT-3 in 10% CFM fermentation at 24 h and 48 h, *P < 0.05. P-values between groups were obtained by unpaired two-tailed Student’s t-test. All data were presented as mean ± SD. 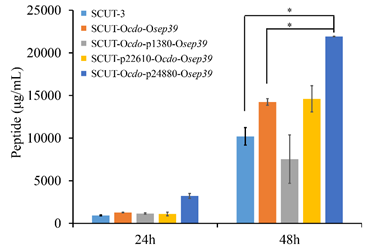 Figure 9 Peptide content from SCUT-3 and recombinant SCUT-3 in 10% CFM fermentation at 24 h and 48 h, *P < 0.05. P-values between groups were obtained by unpaired two-tailed Student’s t-test. All data were presented as mean ± SD. 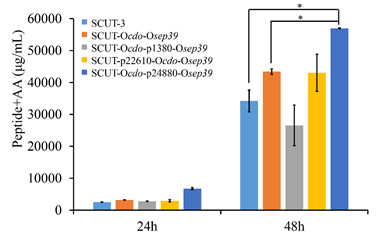 Figure 10 Peptide and amino acid content from SCUT-3 and recombinant SCUT-3 in 10% CFM fermentation at 24 h and 48 h, *P < 0.05. P-values between groups were obtained by unpaired two-tailed Student’s t-test. All data were presented as mean ± SD. 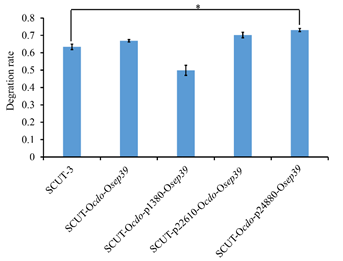 Figure 11 Comparison of the degradation rate between SCUT-3 and recombinant SCUT-3; *P < 0.05. P-values between groups were obtained by unpaired two-tailed Student’s t-test. All data were presented as mean ± SD.

Earlier studies found that co-overexpression of cdo1 and sep39 under constitutive promoter ermE resulted in SCUT-Ocdo-Osep39 yielding fewer cells than wild type SCUT and SCUT-Osep39 but more than SCUT-Ocdo. In our experiments, the bacterial growth condition tests showed that the overexpression of sep39 under promoter p24880 did not affect wild type SCUT’s growth (no significant difference compared to the wild-type) which demonstrated that the negative effect of cdo1 overexpression disappeared. 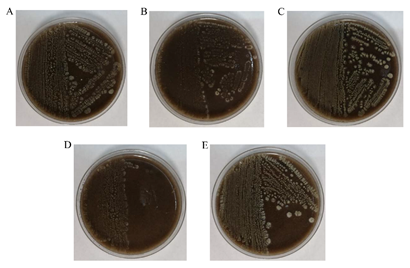 Because of the resulting pollution, amino acid destruction, low solubility and difficult to be digested by animals, traditional physical/chemical treatment methods for feather waste are gradually being abandoned[1]. The most promising alternative approaches involve biodegradation using bacteria. Through studies of using microbial means to convert accumulated millions tonnes of feathers into keratin, we take one step further to accomplish turning feather, instead of a burdensome waste, into rich, widely usable resource of protein and valuable raw materials for many fields.

(1) Biomedical applications of keratin. Keratin based biomaterials have been widely produced and used in various biomedical applications, such as bone tissue engineering[2, 3], wound healing[4, 5], nerve regeneration[6], skin replacement[7] and controlled drug delivery[8-10]. Our research is a simple, green, cost effective and yet efficient methodologies for the better extraction of keratin from feather. It is expected that keratin we extracted will turn into a mainstream biomaterial for clinical trials.

(2) Feather is a natural source of amino acids, peptides, and minerals that can be used in animal feed supplements and as a nitrogen fertilizer for plants[11]. Biodegradation of feather by microbial is a safe, sanitary and cost-effective technology that can play an important role in in processing feather waste.

Our study would shed light on the feather utilization mechanisms of FDB and provide a highly efficient, cost-effective way for degradation of feathers and extraction of available keratin, amino acids. Further exploration of the physiological functions of CDO and Sep39 in this Streptomyces. SCUT-3 will likely provide additional insights into biodegradation using bacteria.