Our exploration is about how to use renewable resources, such as poultry feathers, in an ecological and efficient way. Rather than physical and chemical processes, which have a negative impact on environmental pollution, our project aims to degrade feathers through microbial degrading method by using gene edit technology so as to recycle the feathers instead of wasting them, making benefits for both our society and environment.

The SCUT-3, a kind of Streptomyces, used in this project is a newly discovered bacterium with feather degradation ability [1]. SCUT-3 exhibits a high efficiency degradation rate (>50%) in the biodegradation of feathers. Using 10% submerged and 40% solid-stage fermentation, SCUT-3 achieved high degradation rates of 50.3 ± 1.4% and 57.3 ± 2.3% in 4 days and 6 days, respectively (Fig. 1). 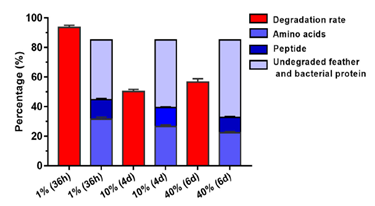 Scientists have been shown that Sep39 is one of the main protease involved in the hydrolysis of SCUT-3 keratin, and overexpression can increase the keratinase activity of SCUT-Osep39. However, when the disulfide bond is not broken, the feather degradation efficiency of these keratinases or recombinant strains is generally not high [2].

One of the key enzyme to break the disulfide bond formed by cystine in feather protein is CDO, thereby opening the peptide bond in feather keratin and further promoting keratin degradation. CDO is a non-heme mononuclear ferrase that can oxidize cysteine to cysteine sulfinic acid, and then dissimilate into pyruvate and sulfite by amino transferase [3,4].

We plan to use synthetic biology and genetic engineering to realize our vision.

Firstly, we cloned the above-mentioned genes and various promoters using PCR, and then used agarose gel electrophoresis to ensure that the target band was successfully amplified.

Secondly, we connect the target fragment to the vector and transform E.coli DH5α by chemical transformation. Finally, through conjugation transfer, the recombinant plasmid will be transferred from E.coli to Streptomyces. The activity of keratinase, the production of peptides and amino acids, and changes in feather degradation rate were then evaluated.