At the initial stage of starting the IGEM activtities, we realized not only public but also students who are aspired to become scientists know little about synthetic biology. We iGEMers felt the need to spread the knowledge of its potential to produce world-changing results hoping to raise awerness of synthetic biology, IGEM and our own project DEBIOTICS. Here, we present several ways we have aimed to achieve the purpose while received public feedbacks to improve our designs from different communities.

Education and public engagement is an essential part of a successful, meaningful project. We have been dedicated to educate the public about synthetic biology, iGEM, and the significance of our project. In times of COVID-19, we have been striving for reaching out to as many people as possible. Through promotions such as social media blogs and delivering pamphlets in hospitals in China, we have not only brought positivity and knowledge to each and everyone else, but we also enjoyed the happiness gained from this meaningful, educational experience.

Since summer 2021, we have been consistently posting on social media, such as the Wechat Official Accounts, to bring synthetic biology, iGEM, and our project Debiotics to the vast audience. By researching on the developmental history of synthetic biology, we have been mesmerized by the scientists’ wisdom of deriving the mechanism of coding genetic blueprints by combining biology and engineering. Through updating on the progress of our project, we have felt accomplished and honoured to pass down the wisdom and apply it to solve the world’s imperative issue — using an alternative method to eliminate the abuse of antibiotics and its damage on the environment. By receiving positive feedback from interested audience, we were further motivated to continuously contribute to the success of this project.

Other than spreading awareness through virtual methods, which is crucial during the pandemic, we also engaged the public in a more direct, in-person form. We picked the hospital as the ideal location for promotion as it contains a considerable number of potential audience and allow us to have a more long-lasting impact by meeting the public. By designing the educational pamphlet and promoting it at the hospital, we hoped to spread the awareness and significance of decomposing antibiotics and how it would contribute to the sustainability of health and environment. 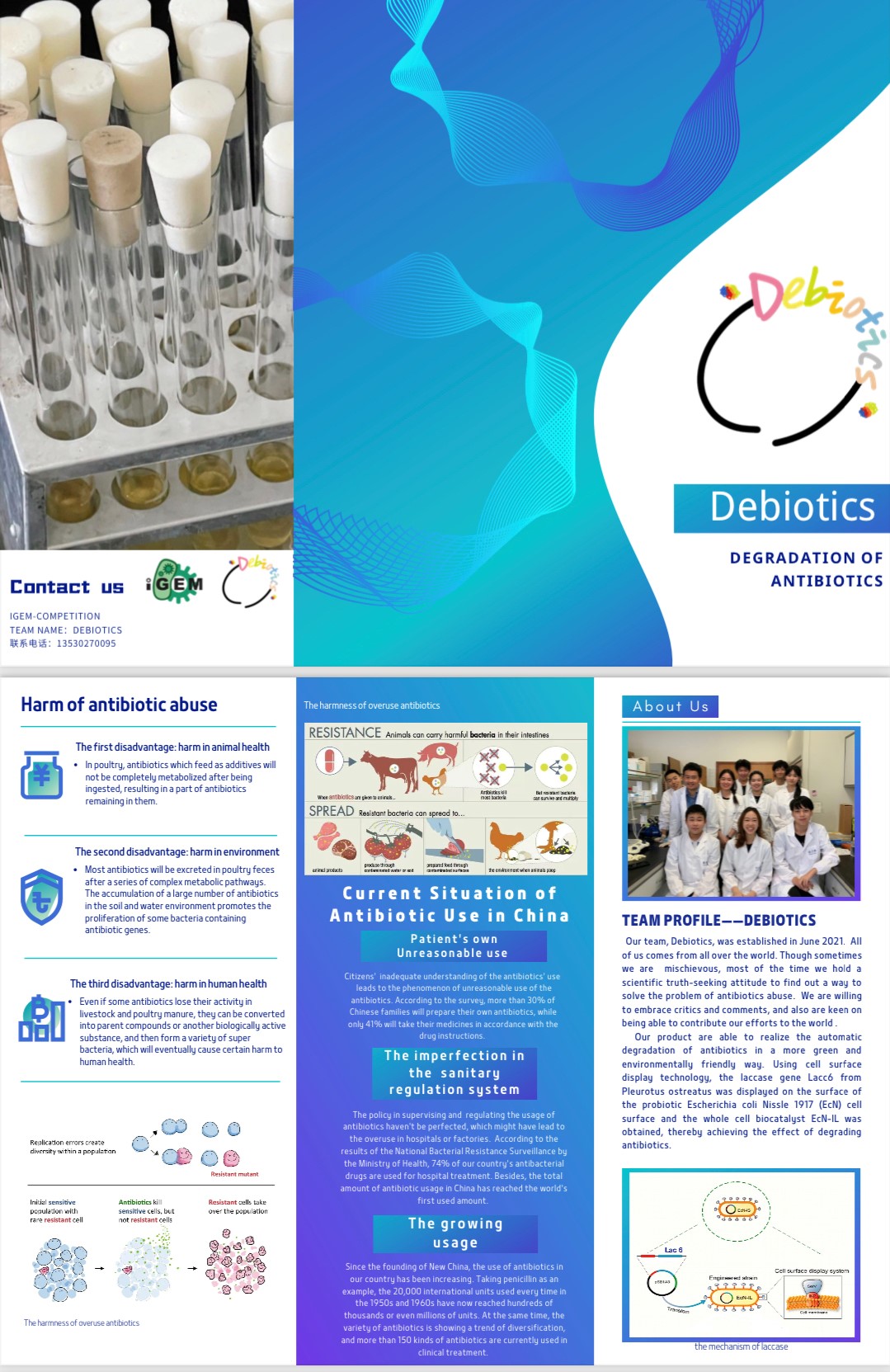 In the summer time of 2021, while we were doing the experiment in Shanghai JiaoTong University, we met with several IGEM teams to discuss and improved the project. We met one high school IGEM team, LZU-HS, and two other university teams named ShanghaiTech_China & LZH_China. The four teams displayed their promotion video and introduced their project accordingly, then gave each other advices to improve the prototype we have already got. Since two of our teams shared the same experiment technique, cell-surface display technology, we gave each other suggestions based on our in-depth knowledge, in ways such as open a new horizon in poultry area toward fecal treatment. Specifically, instead of applying on the animals directly, the other teams suggested us to use in the fecal treatment as the final implementation. 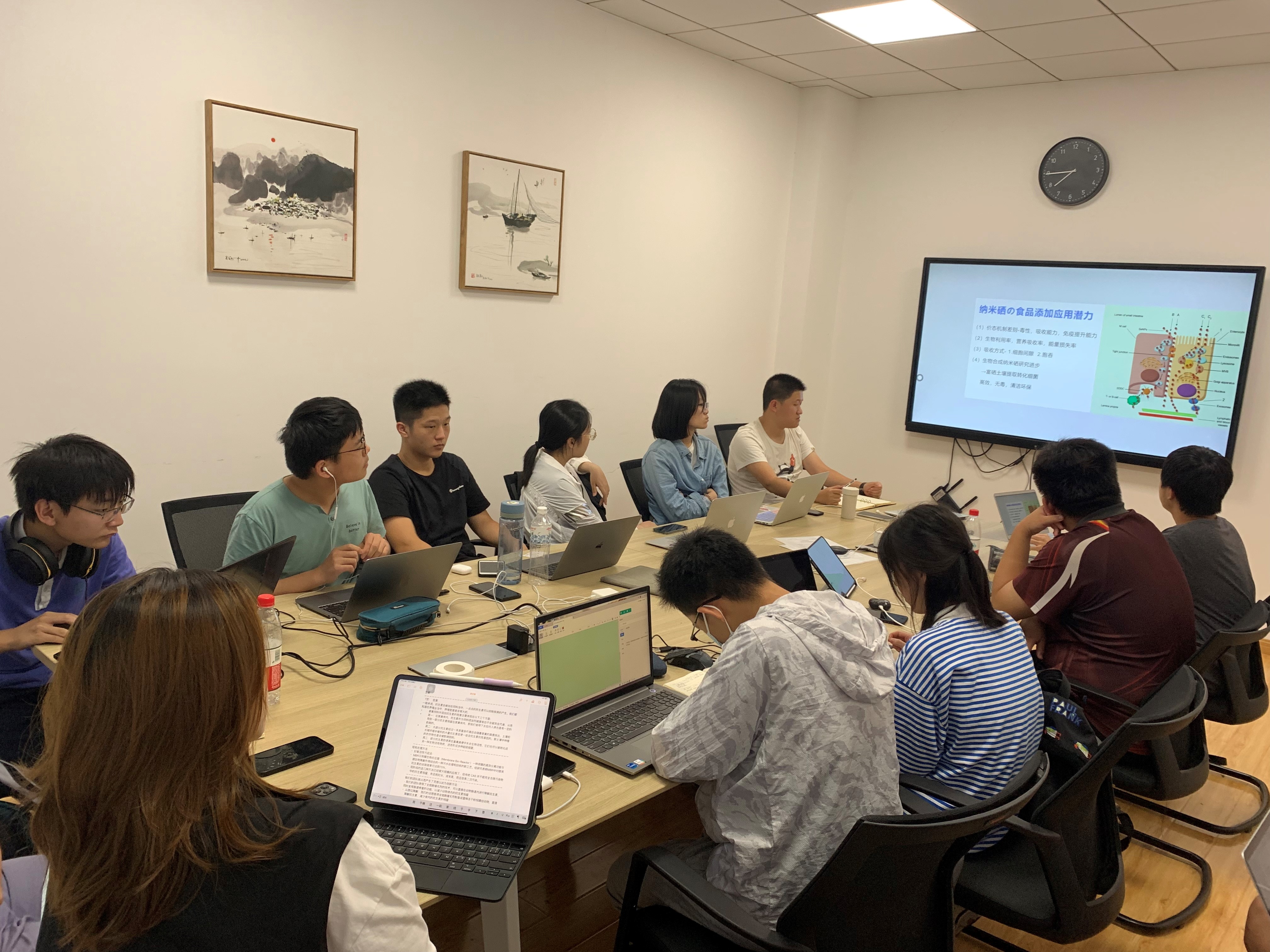 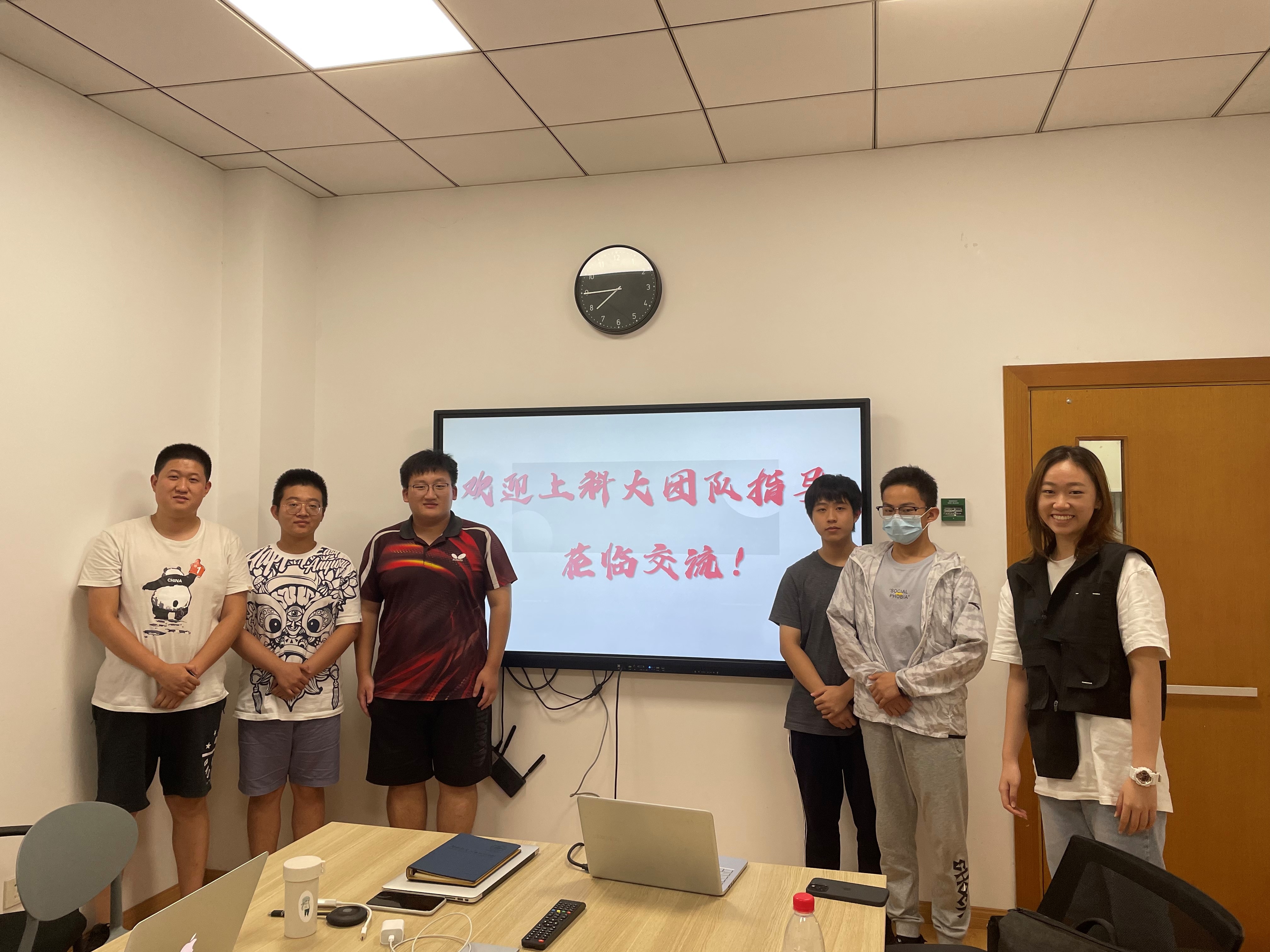 On the July 21th, while the experiment was underway in Shanghai Jiao Tong University, our team was honored to be invited by the members of BioX. During the seminar, we displayed our projects, listened to each team’s thoughts and offered our suggestion to each other. Moreover, we were glad to present our case in front of professor Liu, who has worked in Microsoft and shouldered the coach of IGEM teams for several years. Till the end of the meeting, we harvested lots of invaluable advices from both Professor Liu and IGEM team members in BioX. All in all, huge amounts of great ideas were sparked. The discussion also continued after the seminar, which we communciate to advertise each others' project hoping to raise awerness to the public about synthetic world. 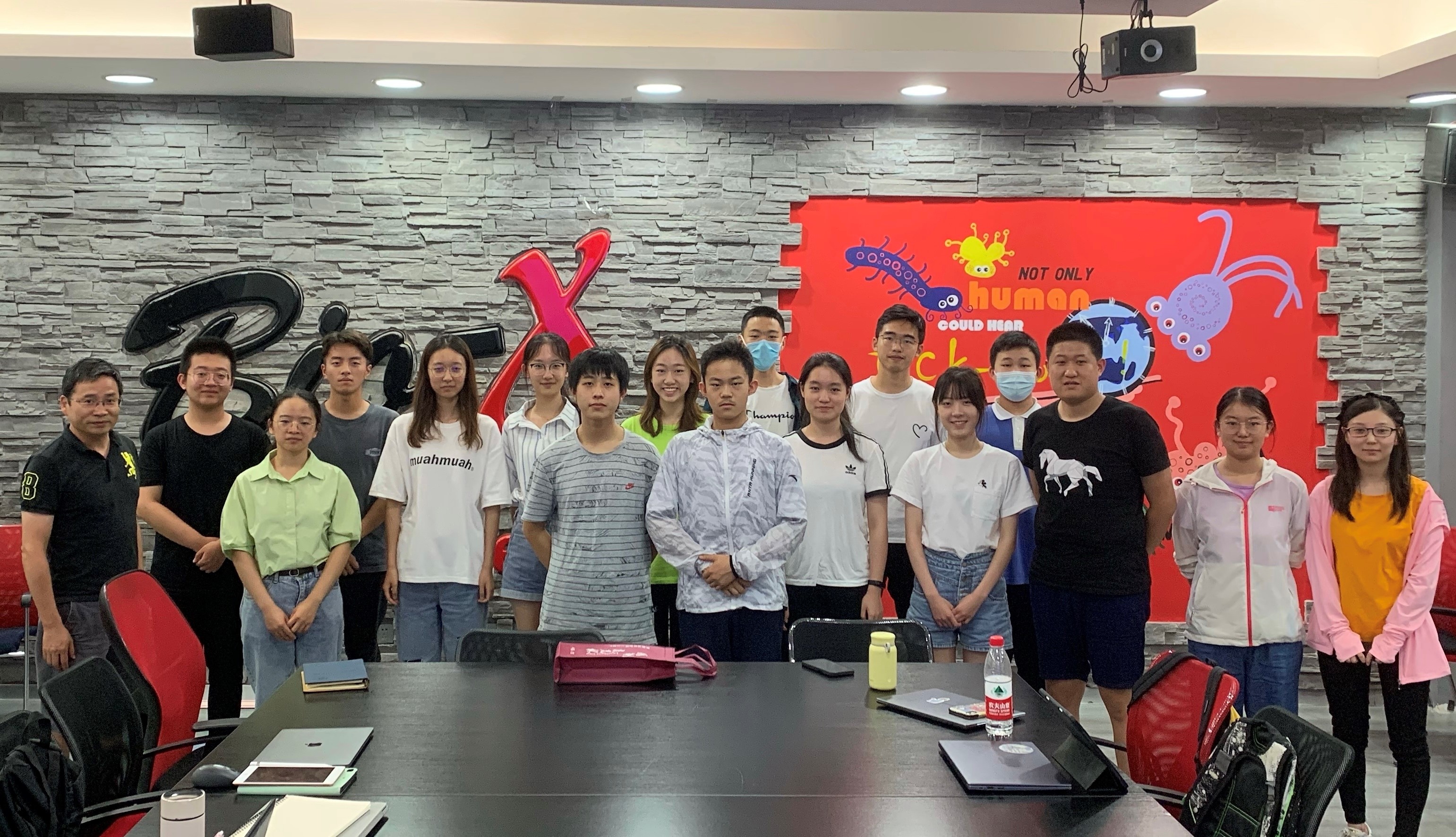 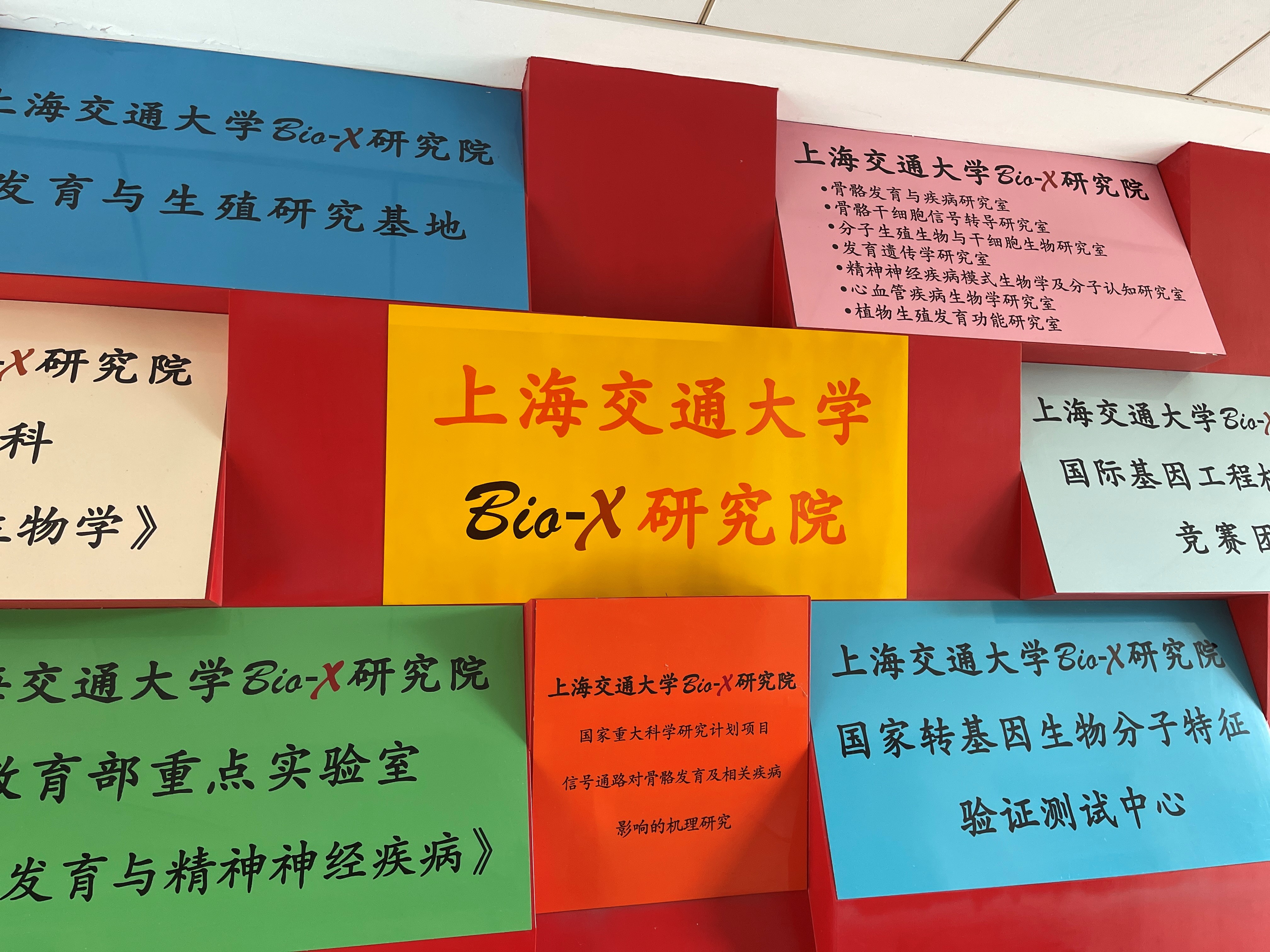 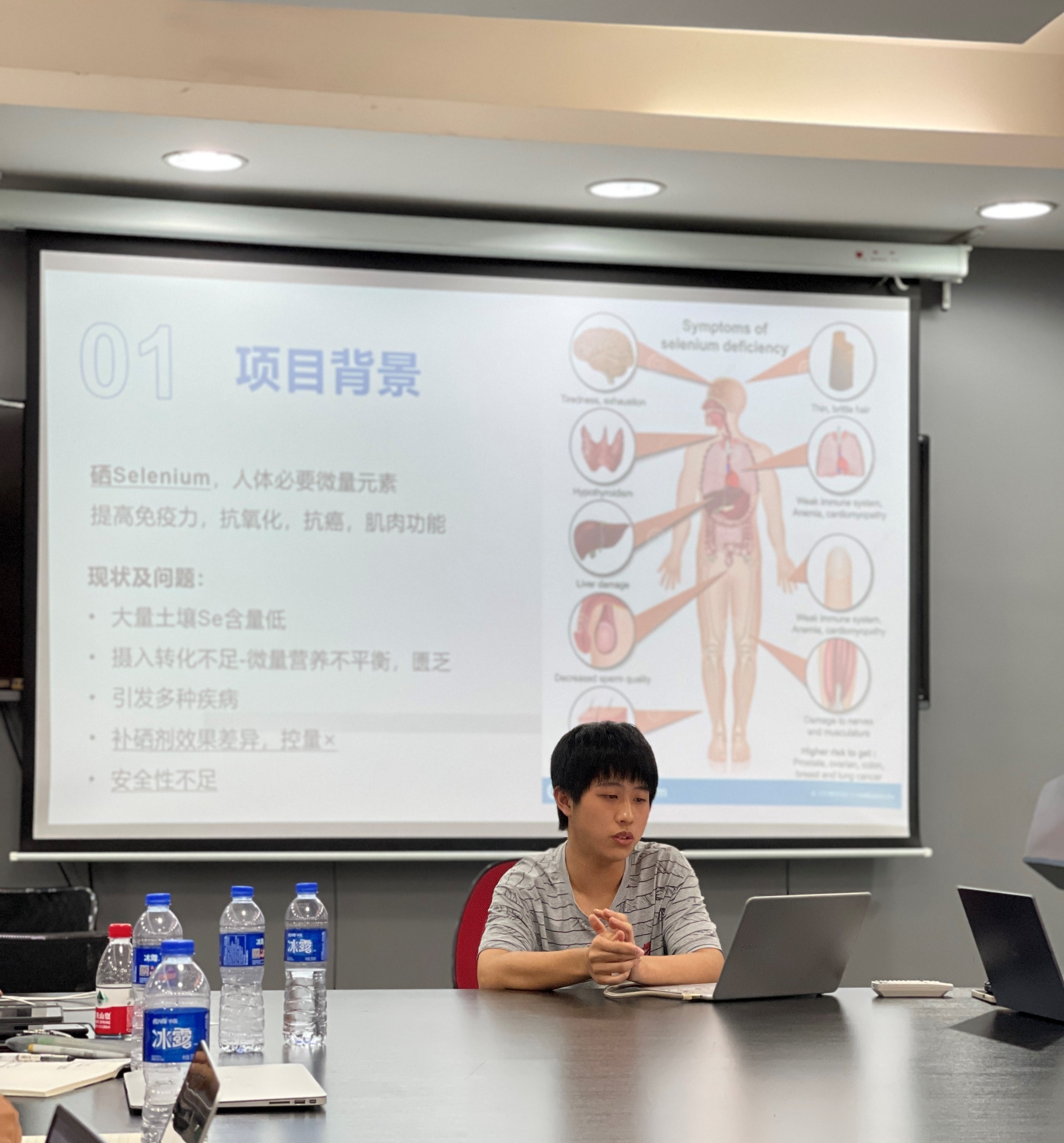 From August 27 to 29, a gathering of young lovers of biology was held in Shanghai, at the end of summer when the epidemic had left many regrets. Hundreds of iGEMer and thousands of visitors online participated in the 8th China REGIONAL iGEMer Exchange Conference (CCiC Conference). In a "post-COVID-19 era" of opportunities and changes, the theme of the conference, "Overcoming Challenges," highlights the faith of young synthetic biology enthusiasts to collaborate, forge ahead and overcome future Challenges together.

The conference featured presentations by representatives from the academic and industrial communities of synthetic biology, presentations by 79 iGEM teams, and workshops by the iGEM Foundation and the CCiC Executive Committee. The conference was held offline and online simultaneously, and thousands of audiences participated in the event through Tencent Conference and Bilibili live broadcast.

What did we do?

The eighth Conference of Chinese iGEM Community was held in Shanghai Tech University both online and in-person. CCIC is a great platform for Chinese igem teams to share experience and receive suggestions from judges and all the Chinese igemers before the competition ends. CCiC Ambassador Guo queried our result, in specific that EcN-IL tends to work better at degradation when the concentration is high (100mg/L), but this usual high concentration is difficult to encounter in the real life. In the conference, our project was able to advance more toward the real life setting, which perfected our project and improved the project’s scientific rigor, becoming more convincing. 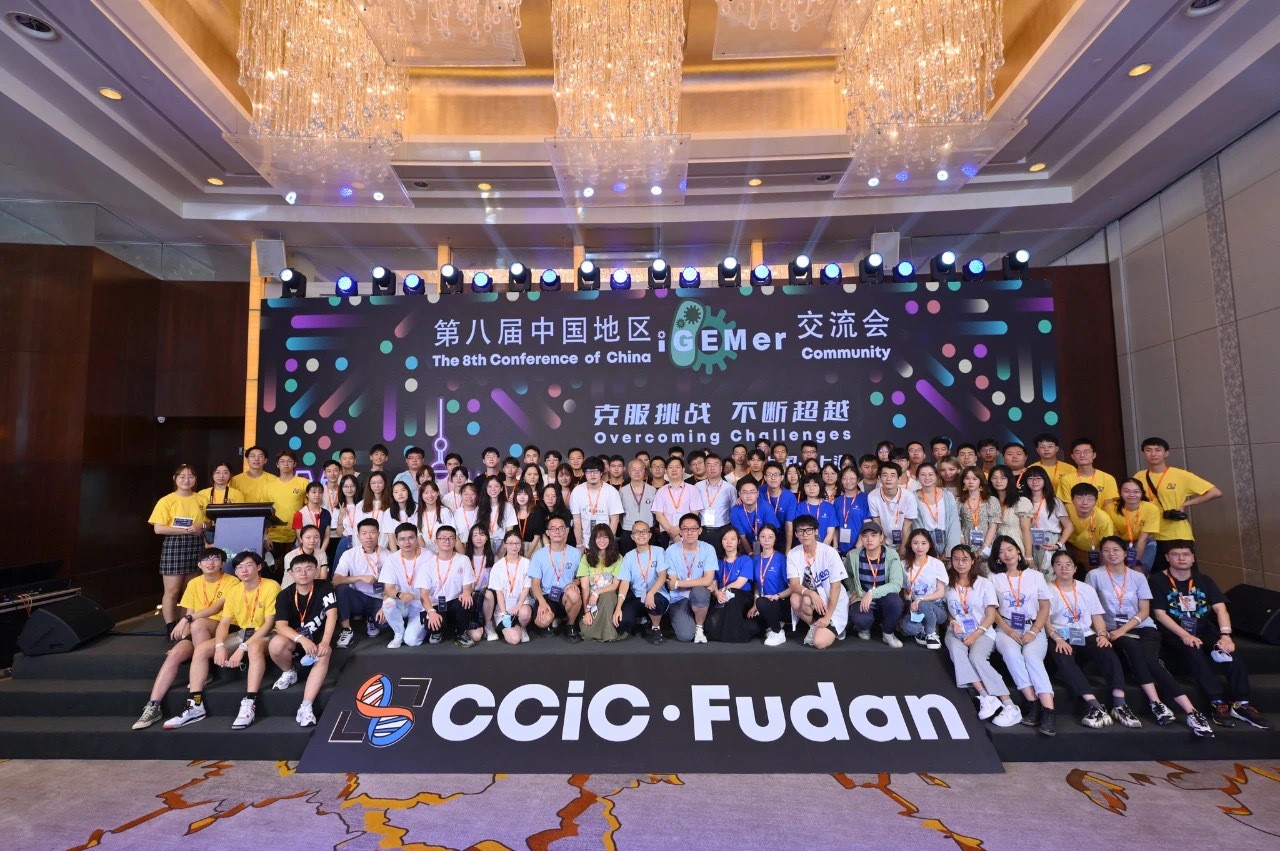 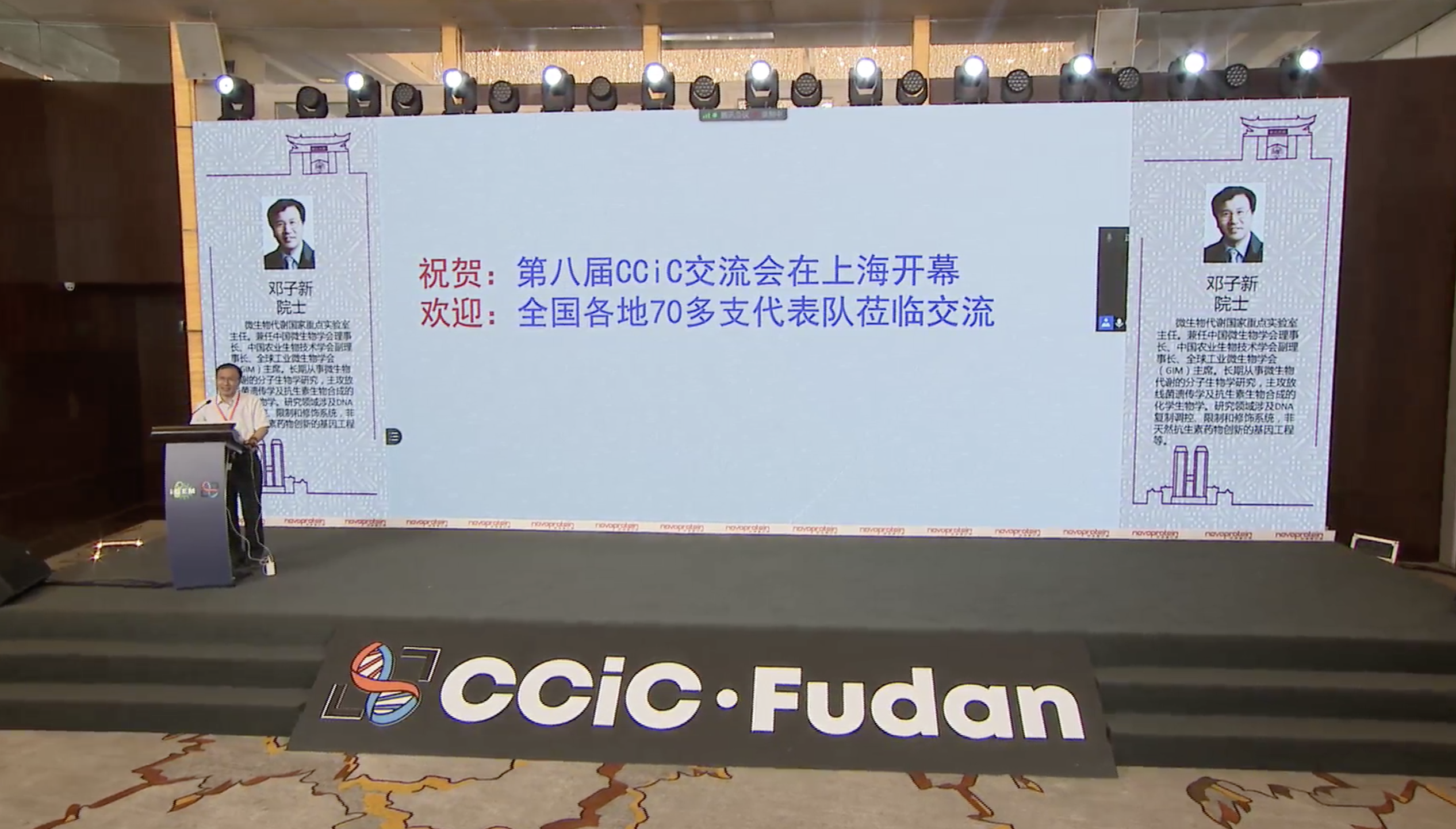 Since our group membrane came from all over China, we are able to introduce the project in our own schools communities in Shenzhen, Nanjing, Beijing to spread the publicity of our own project and synthetic biology. As students ourself, we realized the advantages that if the knowledge we learned in class can be apply in the real world, it will be beneficial and more memorable. The lectures set as a medium for students not only limited to this project but also help inspire future scientists. 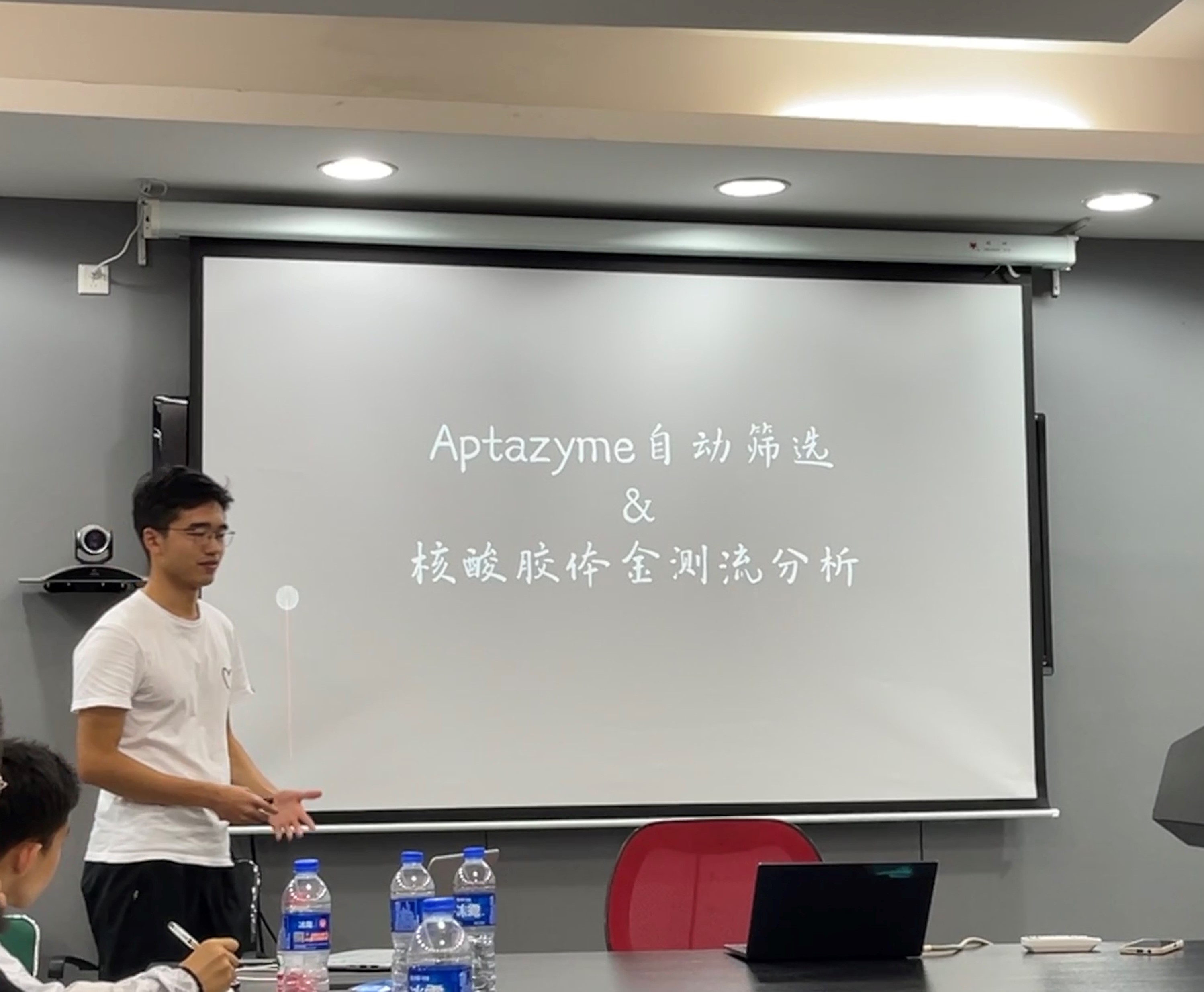