Antibiotics, which served as an agent that can kill the bacteria effectively, plays a crucial role in treating and preventing bacterial infection. However, over the recent years, the use of antibiotics has caused heated debate and controversy. According to research have done, the estimated anti microbial consumption in 2010 was 63,151 tons. Scientists hypothesized that the consumption of antibiotics in will surge to 67% by 2030.

Sulfonamide antibiotics have been widely used in poultry breeding industry due to its disease resistance and growth promoting effects. Meanwhile, the degradation efficiency of antibiotics has not kept pace with their wide range of animal hunsbandry applications. The harm of adding antibiotics in feed is mainly reflected in two aspects: the accumulation in poultries, and the increasing in the resistance of bacteria, which may lead to the form of super-bacteria that could be detrimental to both environment and living beings.

Conventional physical and chemical methods such as high temperature composting and membrane bioreactor (MBR), and other microbial degradation have been widely used to degrade antibiotics. Due to their high costs and the risk of secondary pollution, it is urgent to develop a new method to reduce antibiotics residues. 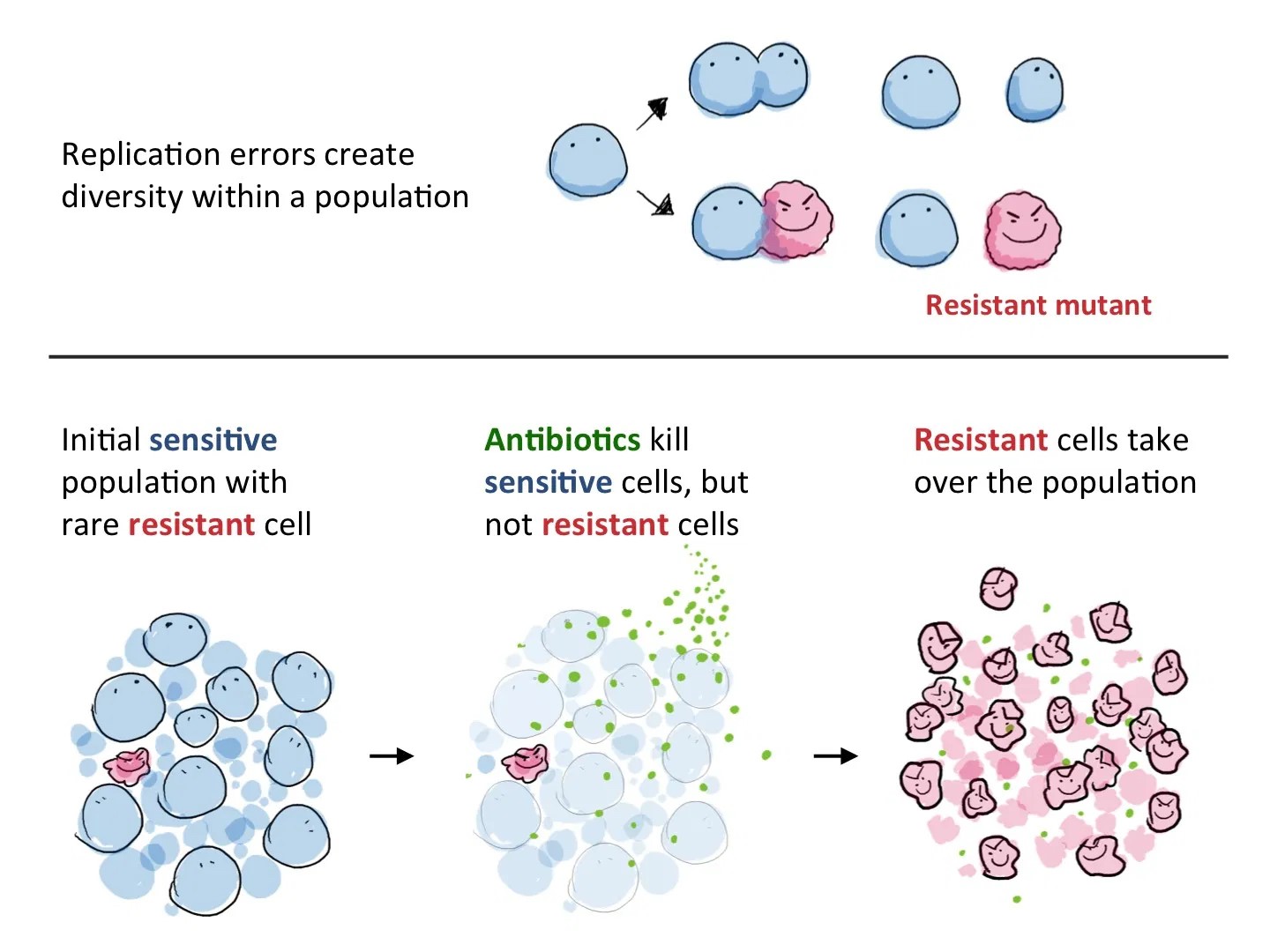 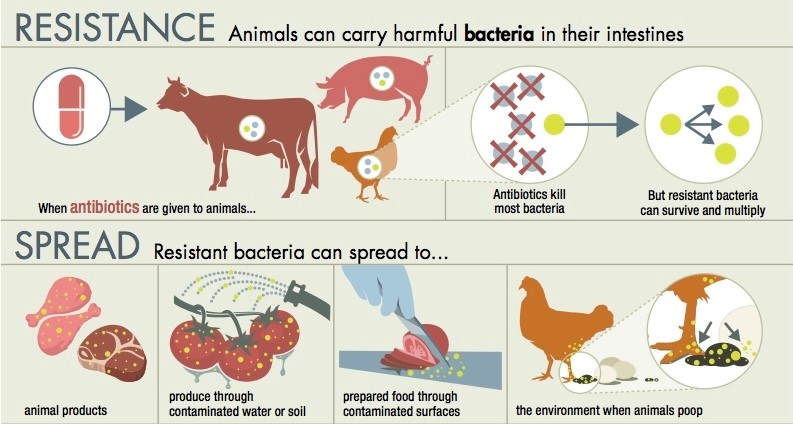 This is where we are inspired, to solve the problem to the source:

There is a kind of oyster mushrooms grow on a meadow in a forest peacefully and prosperously. However, due to the abuse of antibiotics by humans, sulfadiazine, which cannot be degraded, accumulated in the picture, resulted in severe environmental damage. Slowly, some the mushrooms begin to think a way of rebellion.

Scientists have discovered that a compound called laccase in the mushroom named pleurotus ostreatus, when it combined with E.coli 1917, produces EcN-IL; they begin to break down antibiotics residues. As scientists devoted deeper into the research, they successfully transform a team of mushroom to evaluate the war. As war broke out, they rushed to sulfadiazine, which was defenseless and easily degraded. Oyster mushrooms promised the war, once again returned to the original grass to live a happy life. 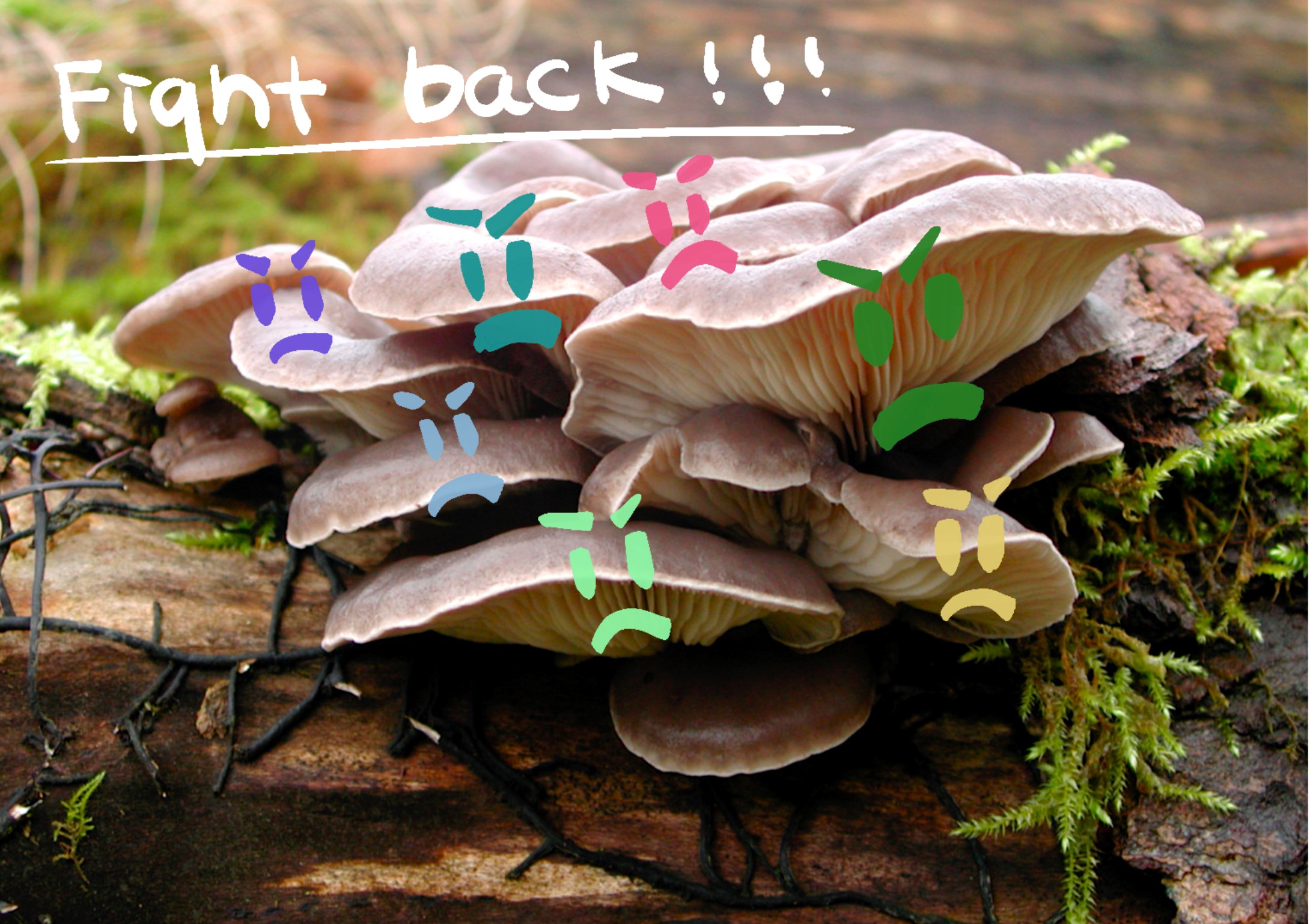 Our team used E.coil Nissle 1917 as the recipient cells. E.coli Nissle 1917 is a remarkable probiotic bacterium first described by Alfred Nissle in 1917. During the time of World War I, Alfred Nissle noticed there was a soldier, in contrast to his comrades, did not develop diarrhea or intestinal disease. Thus, he took a closer examination of the soldier's feces, and isolated an E.coli strain showing strong antagonistic activity against pathogenic bacteria.

Among the microorganism with probiotics properties, E.coli strain Nissle 1917 is probably the most intensively investigated bacterial strain today [2]. Over the recent years, EcN strain is used as the active pharmaceutical ingredient in a licensed medicinal product. The nature of EcN makes it easy to carry other foreign recombinant factors carry other foreign recombinant factors to the intestinal tract and has no harm to the organism. These characteristics make EcN have advantages in clinical treatment and practical application, so probiotics 1917 was selected as the object of this experiment. 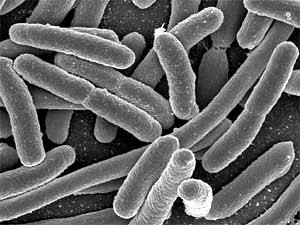 Through research, we have found out that one types of enzyme named laccase has the typical ability to remove antibiotics in an enzymatic membrane reactor (EMR). According to one of the research study that investigated the removal of antibiotics in wastewater by enzymatic activity, it points out that out of 38 antibiotics, 32 were degraded by >50% after 24 hours by laccase. We found out that this enzyme has been widely used in the process of antibiotics treatment. Therefore we are inspired to cut out an specific gene fragment named laccase 6 and transform it into the EcN as the new engineered plasmid.

We found that the application of this biocatalyst can effectively remove the common pollutants in chlorophenols (CPS), nitrophenols (NPS) and sulfonomide antibiotics (SAs) in a short time. Furthermore, more and more researchers have found that bacteria have the characteristics of simple operation, short culture cycle and economic efficiency. They are often used to express biological enzymes 68. 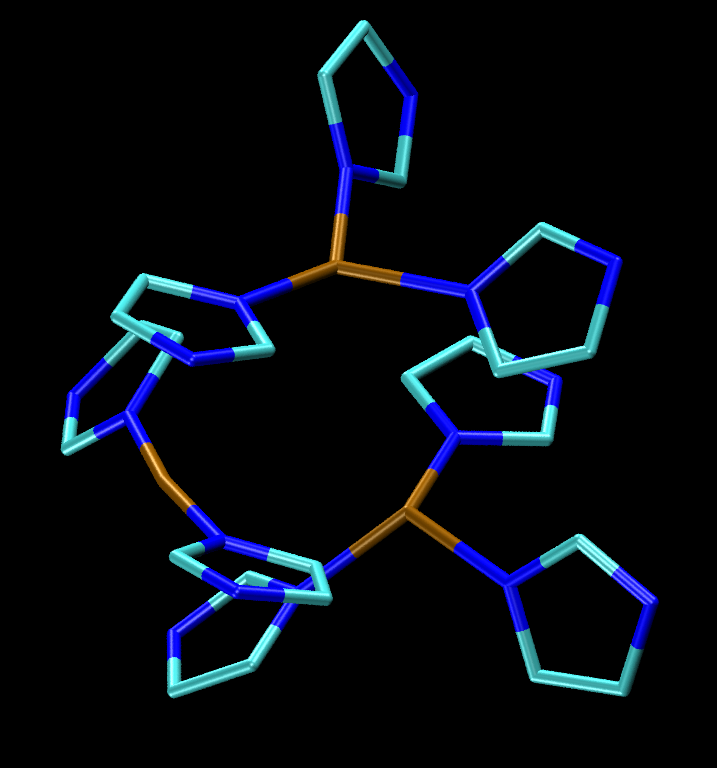 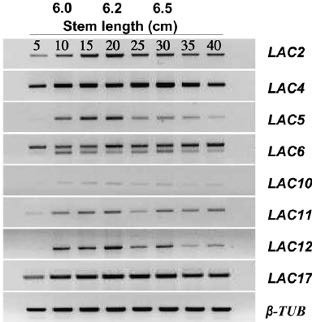 Why specifically Sulfonomide antibiotics (SAs) and not other antibiotics?

At present, high levels of antibiotic residues have been detected in farmland, including oxytetracycline (OTC), tetracycline (TC), Chlorotetracycline (CTC), sulfamethazine (SM2), sulfamethazine (SDZ), sulfamethazine (SMR), sulfamethazine (SMT), sulfamethoxazole (SMZ) and sulfadimethoxypyrimidine (SDM) The residues of 14 antibiotics were significantly higher than those in traditional vegetable fields. Sulfonamides (SAS) It has a wide range of effects on most Gram-positive and many Gram-negative microorganisms. Most sulfonamides have good stability and long half-life under typical environmental conditions, and they have high fluidity in surface water and groundwater due to low Koc value. Therefore, SAS in surface water can pose a possible threat to the growth of microorganisms, algae and aquatic plants In addition, SAS can increase the resistance of pathogenic bacteria, accelerate the spread of antibiotic resistance, and increase human infection and mortality.

Our Vision of the project:

We utilized the biological enzyme catalysts with its advantage of low energy demand, strong stability and simple operational steps under enviornmental conditions of different temperature and pressure. The Whole Cell Biocatalyst Ecn-IL, can be a favorable solution to the mentioned antibiotics abused issue. With the technology of cell surface display, the Laccase gene lacc6 which originated from Pleurotus ostreatus can be displayed on the surface of Probiotic Escherichia coli, Nissle 1917 (EcN), and form a membrane-like mechanism to decompose the antibiotics residues. The utilization of the Ecn-Il can effectively avoid the accumulation of the antibiotics in animals, which may easily be ingested by human and lead to serious health issue. Besides, without the mountainous usages of antibiotics, the tolerability can be largely reduced, and thus the formation of the super-bacteria can also be avoided. More importantly, the Ecn-IL is friendly to the environment. Specifically, when using the Ecn-IL, people can save much resources and eliminate the residual of the antibiotics that lie in the waste-water, soil, and animals’ excrement at the same time. 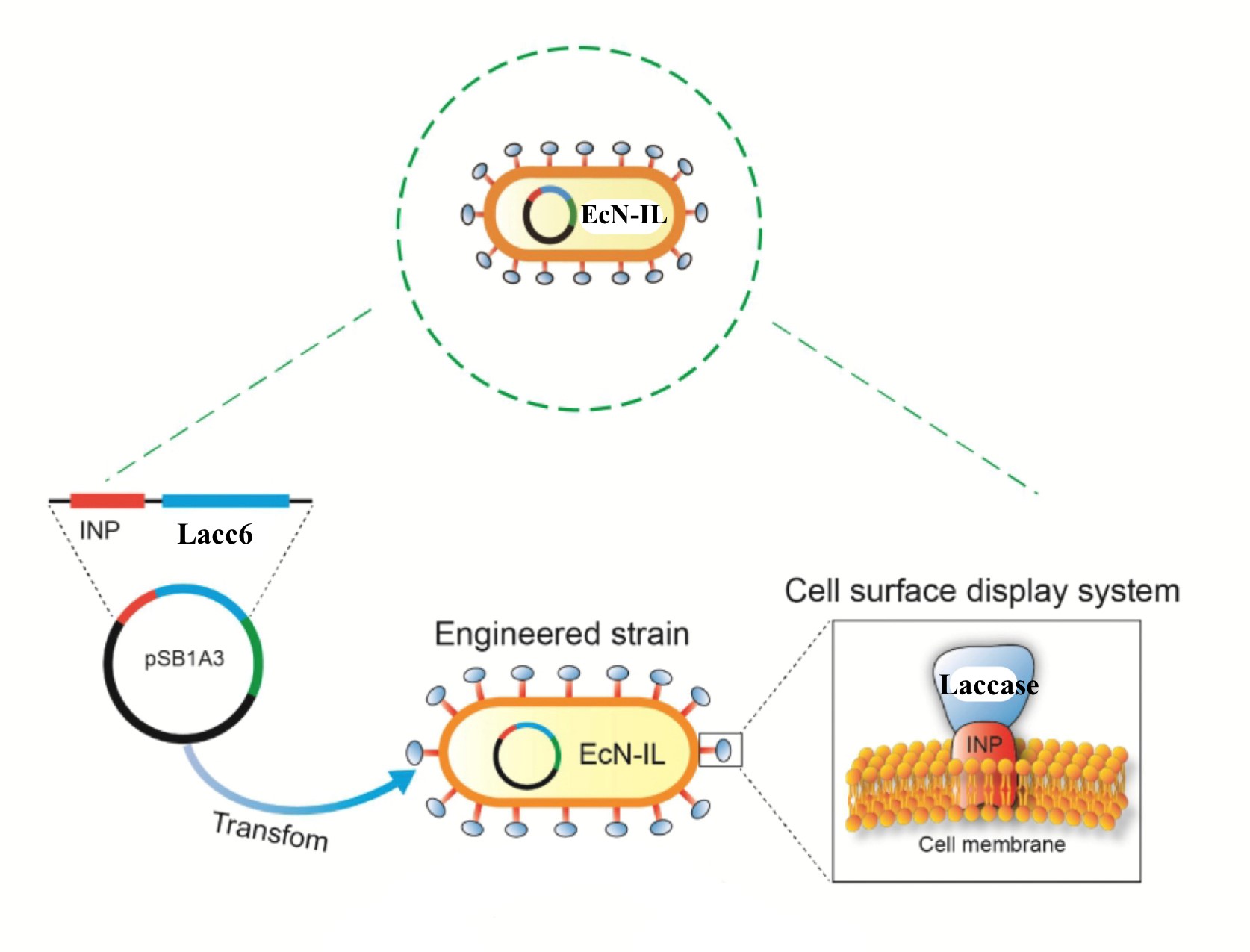