On this page, we showcase our contribution to the iGEM community. Our team DEBIOTICS verifies the effectiveness of EcN-IL, cell surface display technology on Nissle 1917, wishing to pass the experiences for the future iGEMers who are interested in applying this technology elsewhere.

Microbial cell-surface display system refers to the method of combining molecular cloning technology and enzyme engineering technology, which fuses the gene sequence of foreign functional protein with the gene sequence of the anchor site on the surface of specific recipient Microbial cell membrane or cell wall. The newly synthesized fusion protein can be secreted in cells and can recognize specific cell surface structures, so that it can be expressed directly on the host cell surface to achieve practical application. The cell surface display system is generally composed of Carrier protein, Passenger protein and Recipient cells.

Carrier proteins are primarily responsible for binding specific target proteins in the cell surface display system, thus enabling the newly synthesized whole cell catalysts to perform special functions. The types of carrier proteins vary greatly due to the structural composition of the recipient cells. Compared with the control strain, the strain was kept at room temperature for 25 days. The activity of bisphenol A can still reach 90% of the initial enzyme activity, and the degradation rate of BISphenol A and SMZ in wastewater environment can reach 60% and 50%, respectively.

In general, the protein consists of three domains: n-terminal, C-terminal and intermediate repeat unit, which account for 15%, 4% and 81% of the total sequence, respectively. We found that the N-terminal domain is involved in the localization and transmembrane transport of INP on the surface of microbial cells, while the C-terminal domain is involved in the secretion and transport of INP. The intermediate repeating domain is rich in a variety of hydrophilic amino acids, which can form β -folded isosymmetric conformation, thus providing thermodynamic stability of INP. Jung et al. found that the structure of the intermediate repeat unit could be modified according to experimental purposes without affecting the function of the fusion protein. Except for the whole sequence of INP, the sequences containing only the C-terminal or n-terminal domains of INP could be successfully applied to the surface display system of microbial cells. At present, due to the special structure of INP, it can be used to display a variety of exogenous proteins and has a good application prospect in the fields of antibiotic degradation, heavy metal adsorption and industrial enzyme display.

Passenger protein is also known as Target protein. Currently, more and more researchers fuse passenger protein with various carrier proteins by using cell surface display technology to obtain whole cell biocatalyst with special functions. Due to the size and folding of passenger protein, its secretion and transport in the pericytoplasm will also be interfered to some extent. Therefore, the selection of passenger protein is very important in practical application. Currently, passenger proteins are divided into two categories in order to remove environmental pollutants. One comes from target proteins naturally secreted by microbes such as fungi and bacteria, These target proteins contain some organic-degrading enzymes such as LACC6 derived from white-rot fungus, LACC9 and LACC10 have been proven to rapidly degrade chlorophenols, nitrophenol and sulfonomide antibiotics and other organic pollutants. The other is a synthetic peptide or short peptide, which can be correctly expressed on the surface of host microorganisms or in the cytoplasm after molecular modification. Liu et al. successfully expressed heptaeptide containing lysine and cysteine on the outer membrane of Escherichia coli, which could specifically adsorb Hg2+ and MeHg95 in carassius auratus.

In recent years, EcN has been mainly prepared as a commercial drug Mutaflor for human medical defense. The drug is produced in capsule form, and the content of EcN in capsule can reach 2.5-25×109 Cfu/capsule 100. The EcN activity in the capsule is not affected by gastric acid and various digestive enzymes in the human gastrointestinal tract, so it can be specifically implanted in the animal intestinal tract. In the field of clinical application, EcN is mainly involved in the treatment of the following categories of diseases: intestinal diseases, human immune regulation, and cancer treatment. However, our team only used the EcN in terms of fecal treatment, hoping future iGEMers to further explore its effect in other field. Overall, that is what we have done in terms of reserach. 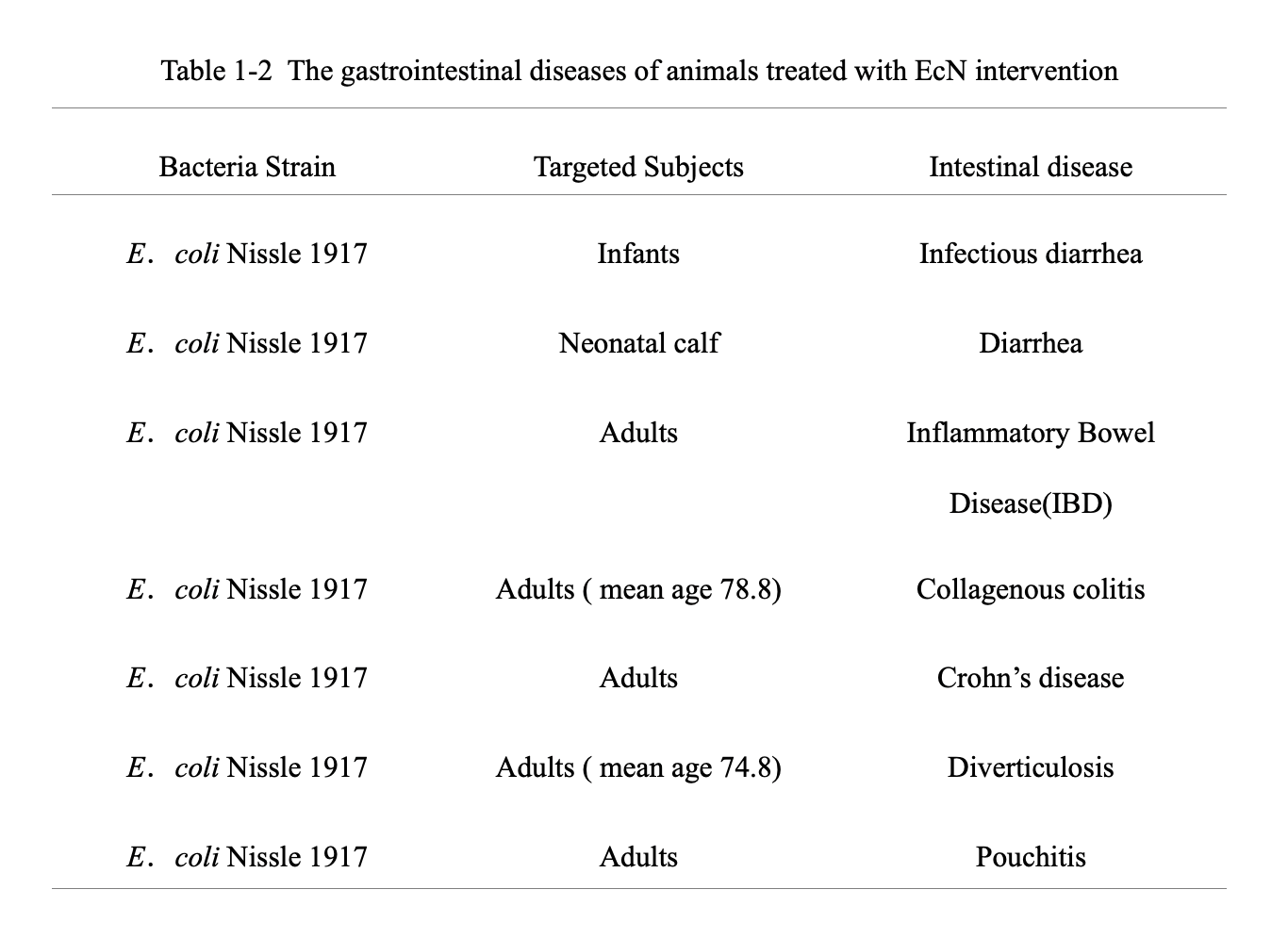 Notes: The table is a summary of our research on the application of E.coli for various subject for different effects.

Based on our own research, we wish to provide inspiration for further researchers to explore the function of the cell-surface display technology and the INP protein in different scenarios. Good luck!