Considering that it is impossible to get the degradation rate of sulfonamides antibiotics by engineering strains by traditional chemical methods, we used high performance liquid chromatography to determine the degradation rate of sulfonamides antibiotics. ABTS was used as substrate to determine the enzyme activity. It is concluded that the optimum reaction temperature is 40℃ and the optimum pH is 7.0.

After a comprehensive comparison of various existing sulfadiazine degradation methods, we found out that the laccase gene Lacc6 which derived from Pleurotus ostreatus can be displayed on the probiotic E. coli Nissle 1917 cells by using cell surface technology and named EcN-IL to degrades antibiotics. Subsequently, the whole cell catalyst was prepared as a strain of lyophilized powder and apply in animal feces.

We chose E.coli Nissle 1917 as our experimental object, due to its harmless nature and the ability to combine foreign factors, which has a higher prospect for subsequent experiments. 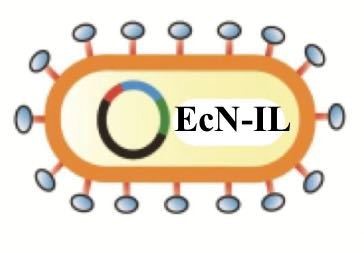 We chose laccase6 gene fragment of laccase, because in the previous study, we showed that laccase degrading antibiotic sulfadiazine and lac6 gene fragments include this part of the genetic information, we want to be able to transfer this part of the ability to e. coli 1917, make its can degrade antibiotics on animals. The laccase we use is extracted from oyster mushrooms

We then selected a plasmid to transfer our LAC6 gene fragment to E. coli Nissle 1917 to make it a whole cell biocatalyst. A plasmid is a partial gene fragment, and we can put the gene fragment we want to add into the plasmid, and then bind it to the target genetic information

The method we use is called ice riboprotein, often used for cell surface display techniques. Ice nucleation protein (INP) is a secreted surface protein found in more than ten species of Gram-negative bacteria such as Pseudomonas syringae and Erwenella.

In the past decade, INP has been widely regarded as carrier proteins in bacterial cell surface display systems, and have been used to display different kinds of exogenous proteins

We then use cell surface display technology in our experiments. We used PCR to anchor the laccase gene fragment to E. coli 1917 using the INP display technique

This allowed the laccase gene fragment to be anchored to the extracellular membrane of E. coli 1917. And whole cell catalyst ECN-IL was formed and subsequently tested in vitro.